Launching a small, plastic kayak into the ocean in pitch blackness can be tricky. Stuffing a full load of professional underwater photographic equipment into such a small craft adds another dimension of difficulty.

On that early June morning, I decided to push the envelope a bit farther: If I saw a white seabass, yellowtail, shark, or anything else worth capturing on camera, I’d don snorkel gear, dive off my kayak, and snap away. The best-case scenario would involve me landing on the beach 12 hours later laden with photos of some rare finds. The worst-case scenario might involve capsizing the kayak, losing all my gear, and an awfully long swim back to shore; but the lure of the spring spawn and masses of marine life proved irresistible. 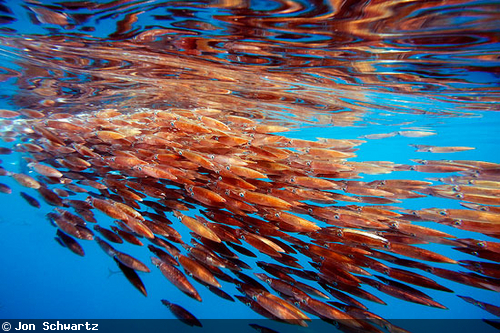 La Jolla Shores in San Diego, CA, isn’t exactly known as one of the world’s top snorkeling sites, but it does happen to have a thriving population of white and black seabass, sea lions, yellowtail, mako, sevengill, and thresher sharks, sardines, and mackerel. In the spring, another subject ventures into these surprisingly cold waters: “market squid,” which soon spawn in huge numbers. These cigar-sized mollusks blanket the ocean floor to such an extent that divers liken their appearance to a fresh coat of snow. They also congregate in slowly moving schools well below the surface. At night, commercial squid fishermen attract hundreds of tons to the surface by shining floodlights.

The squid are rarely seen on the surface during the day—most photos of the squid have been taken in dark, deep, murky water. On that day, I wasn’t planning on seeing many: I’d come to see the litany of predators feasting on them.

I use a D700 in a surf housing with an assortment of wide-angle lenses, but to keep things simple and relatively compact, I chose a fixed 20mm f/2.8. The surf housing is built simply and doesn’t allow me to access my ISO or aperture once I’ve set the camera in the housing, so I spent many hours before the trip trying to guess which ISO, aperture, and shutter speed settings might work best. With such a limited amount of space on the kayak, I decided against bringing my flash unit.

I had a lot of things to take into account. The surface water in La Jolla where I’d be swimming is usually cloudy. I might be shooting in visibility ranging from five to 20 feet, between the surface and 15 feet depth, in light ranging between dawn and bright midday sun. I might encounter a single large fish or many small ones, the head might be on the right or left, and they might be moving slowly or rapidly. How do you prepare your camera for such a wide range of variables? 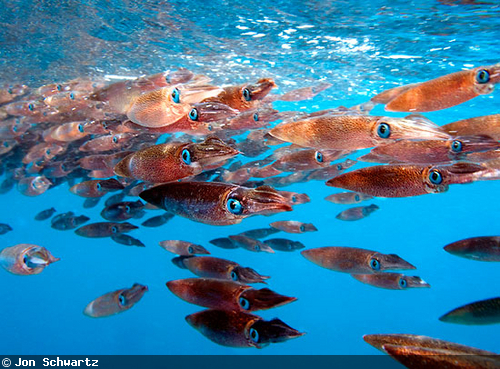 A thousand scenarios came to mind. If I encountered a large fish like a thresher shark or black seabass swimming lazily from right to left at a fixed distance, I could get by with a slower shutter speed, smaller aperture like f/3.2, and a lower ISO. If I encountered fast-moving fish like a school of breezing yellowtail in low light, I’d need a faster shutter speed and a higher ISO, but to get all of the school in focus I’d need a larger aperture like f/13 or higher.

To increase the chances of seeing something spectacular, I accompanied my friend and kayak guide Josh Pruitt. He’s spent over a decade and thousands of hours paddling La Jolla, and probably knows as much about the area as anyone. We launched in the surf, paddled a mile or two offshore and began our search for subjects.

Hours passed, and the misty marine layer burned off to reveal a bright summer day. We ventured farther offshore until we encountered a patch of water that was unusually clear and blue by La Jolla standards. Pruitt stood upright in his kayak and scanned the surface for birds, telltale swishes, and other signs of life. Standing up in an ocean kayak miles offshore is a radical maneuver, to be sure. He applies this move with great effectiveness, in effect gaining the same enhanced field of vision that one would have standing in a powerboat. Eventually he spotted something unusual on the surface and we paddled towards the red, frothing mass of life. As we closed in, we couldn’t believe our eyes: a giant ball of squid was boiling at the surface! 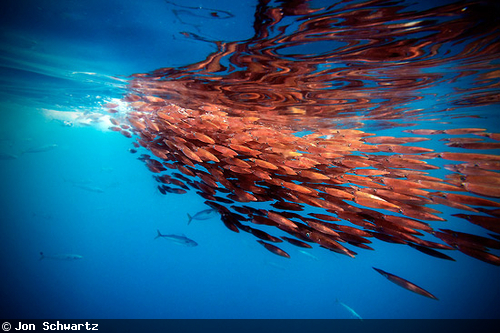 I’ve seen many species swarming in boiling schools, including striped marlin, sardines, skipjack tuna, mackerel, pargo, mahi-mahi, and jacks, but squid on the surface? My heart almost jumped through my wetsuit! The ultra-rare phenomenon left me trembling with excitement, yet I also felt a deep sense of urgency and unease. I wasn’t ready. Hours of paddling with no action had lulled me into a state of complacency. I’d grown weary of keeping the heavy housing perched on my lap, and now my gear was all over the place.

I had stuffed my camera housing in the forward hatch of my kayak, and my fins and mask lay buried behind me somewhere in the aft. I wanted to enter the water immediately, but first I’d have to spend precious time—and make a racket—getting my gear ready. There’s simply no quiet way to scurry forward, wrestle a metal camera housing out of a plastic kayak hatch, and reach behind your back for a weight belt you can’t even see!

Even if I was able to enter the water immediately, what was the chance that the squid would stay put long enough for me to get any shots? And for that matter, was my camera even ready? Every second counted. If everything was in perfect working order, I figured there was a slight chance to get a decent image—at least one good enough to back up my account of what I was witnessing. No one would believe me otherwise. 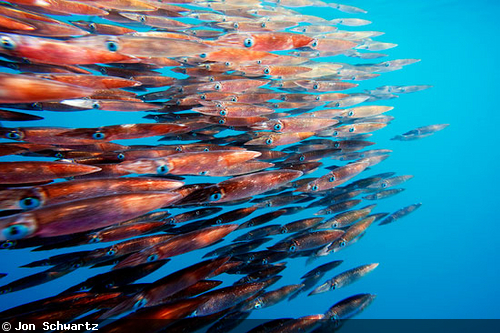 As I fumbled with my gear, I kept yelling to Pruitt, “Are they still there?” He’d see them one minute and lose sight of them the next. My hopes soared and sank.

I finally pulled my mask on and plopped out off my kayak into the water. The mask flooded immediately, and then I remembered why: the night before I checked my expensive mask and noticed a fissure, so I’d grabbed my young daughter’s mask instead. Talk about a weak link in the chain—10 dollars of the department store’s finest! I cleared as best as I could and looked down, but I saw no squid.

Panicking, I swam down about 15 feet, and looked up at his kayak. Incredibly, the squid were bunched up next to his kayak on the surface, barely moving. I took photos and watched, and began to understand.  They were using his kayak as protection! 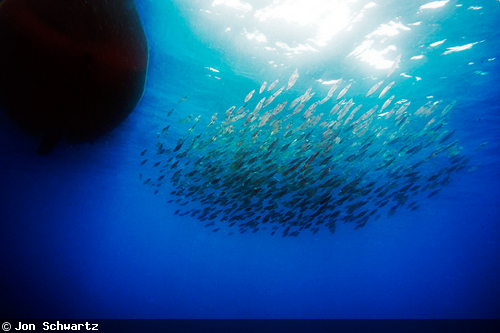 Birds were dive-bombing the squid that had ventured farther way from the kayak, and the entire school had likely been pushed to the surface by hordes of voracious predators. Greenback mackerel darted into the edges of the shoal, picking them off at will.

Eager to avoid spooking the squid any more than necessary, I surfaced about 15 feet away and faced them. They stood their ground, and even seemed to point towards me en masse. The sneaky cephalopods certainly weren’t fleeing, so to get better pictures I slowly closed the gap between us, firing as quickly as my camera would allow (about 8 fps). To my astonishment, they seemed to swim towards me, and soon I was completely surrounded. 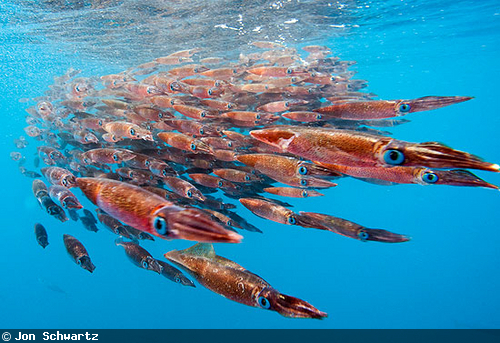 “If even one of these shots comes out, I’m golden!” I thought. Once they passed I followed them towards the kelp.

A good many squid stayed right with me, possibly sensing that I was less of a threat than the marauding birds and fish. Photos might prove the encounter actually occurred, but who would believe squid were fluttering their mantles mere inches from my mask?

They were literally so close that I could hold them, so to prove it, I gently cradled one in my hand and took some photos. It acted as pleased as a pet mouse, and made no effort to swim out of my hands. On a whim, I placed one in my mouth, held it in place with my lips and gums (no teeth!), and it stayed there calmly fluttering it’s mantle as I took a quick self (or group) portrait. I opened my mouth and the animal slowly fluttered away. 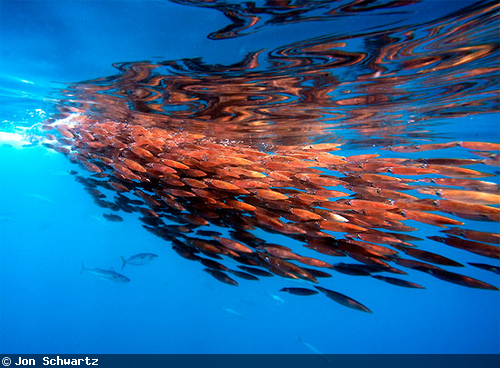 I remember thinking, “I hope some of these shots came out, because if they don’t, I won’t even believe it happened!” Although a good chunk of my 32GB memory card remained unused, I was in no hurry to get back in the water and risk what I had.

Landing back on the beach at 3:00, I loaded my kayak in a hurry and drove back with great anticipation. When the RAW files popped open on my computer, I let out a shout of pure joy. After all of my travels to exotic locations in search of rare images, I scored my best photos half an hour from home. 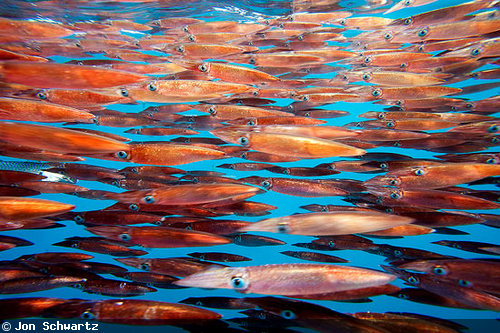 Jon Schwartz's big fish photos, travel articles, and stories are featured in magazines, calendars, and coffee table books. He's appeared on National Geographic TV. When he's not teaching elementary school in San Diego, CA, he's traveling to places like Kona, Nicaragua, and the Amazon in search of exciting images and adventures. Check out his website and blog.