This article was adapted from a similar article the author wrote for Underwater Photography Magazine issue 56.

In  any form of photography choosing a subject is vital to the composition, lighting, and even the overall impact of the image. However, in our distinct realm of underwater photography, a subject has the equally important responsibility of helping to uncover the mysteries hidden below the waves.

As divers, and more specifically underwater photographers, it is our innate duty to communicate what we may see on any given dive to our landlubbing family and friends. As I dig deeper and deeper into my foray as an underwater photographer, I have begun to notice a pattern of growing favoritism towards certain underwater subjects among the non-diving community. In this list you would be hard-pressed to find any preference towards macro subjects such as blennies or nudibranchs hidden in a world dominated by the giant predators of the ocean. This is not to say that we must forgo our love for shooting macro subjects to meet the needs of the lay population, but it does beg the question: can we have our cake and eat it to?

In past experience, I have shot numerous Caribbean Reef Shark pictures featuring an out of focus subject in the distance that has impressed my friends at home, but lacked the standard that I expect of myself. Embarking on a live-aboard to the Turks and Caicos with the Jim Church School of Underwater Photography, I was motivated to produce some shark images that would not only impress my friends back home, but even make my fellow underwater photographers green with envy. Easier said than done. 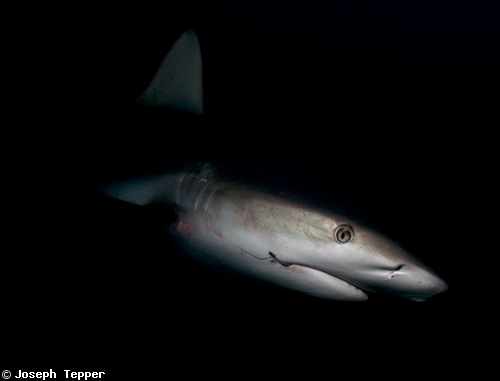 In contrast to the programs featured in “Shark Week,” divers understand that sharks are often more put off by our presence than we are by them. It is rare to find a reef shark willing to swim close enough for a good shot, much less a participant to repeat the action. Although still quite contested in some places, shark baiting can be quite beneficial to underwater photographers as it provides almost guaranteed Caribbean Reef Shark action and encourages the animals to stick around for photographic adjustments. The following is my best attempt to summarize some useful techniques to get some shark shots you can truly be proud of.

Preparation before entering the water, both mental and physical, is important on any dive but is especially crucial when dealing with such energetic and exciting subjects as sharks. As for choosing a lens, a 16mm fisheye or a comparable lens is most effective for shooting wide angle with sharks as it keeps the majority of the shot in sharp focus, while allowing the photographer to get closer to the subject. 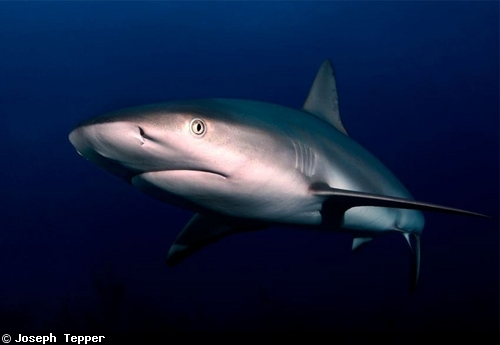 The increasing popularity of  mid range zoom lenses, while useful for shooting more timid subjects, has little place with reef sharks that will repeatedly be within a few feet of the camera. However, wide-angle lenses aren't the only way to capture the intensity and rush of a shark encounter. Shooting with traditionally macro or intermediate lenses, such as a 60mm, can be used to capture powerful images of shark profiles. Once you have chosen the right lens for your specific situation, and have taken enough deep breaths to find the right state of mind, it is time to dive in! 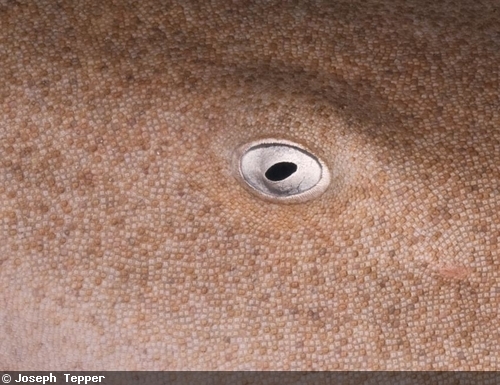 Location, location, location. Achieving success at a “shark shootout” often starts with finding the right position in the underwater arena. Being first on the scene is not only the easiest, but also the most beneficial approach to find that right spot. As soon as the fish is in place, the best location may be near the source of the scent, making sure to exhibit caution when in proximity to the shark and the bait. However, as more people and sharks arrive on scene, your positioning must evolve to avoid unwanted divers or backscatter in the background.

You've heard the old adage about being circled by sharks? Well it’s mostly true; except that in my experience the sharks will follow more of a figure eight pattern to investigate the commotion. By putting yourself in the at the perimeter of this pattern and facing outwards, you have the opportunity to repeatedly shoot the sharks with a more pleasing negative space and more importantly, some stunning pictures!

Before shooting away, it is important to review some of the unique aspects of metering and lighting sharks. Unlike many underwater subjects, the agile sharks require very high shutter speeds (most likely the max flash synch speed) to freeze their action completely. It is a good start to set your shutter speed around 250th, varying to meet individual conditions or to experiment with blurring or other artistic effects. As for aperture, it really depends what you're trying to accomplish with the background blue as well as your individual situation (depth, time of day, location, etc).  Students in the Jim Church School of Digital Underwater Photography learn quickly that  when  taking a picture with a strobe you are (in effect) taking two pictures one on top of another. If you are looking to take a shot with just a standard blue background, then you might want to meter for that blue (perhaps shooting for 2/3's of a stop underexposed). In clear Caribbean waters it is a good idea to start in the rage of 5.6-8, and then adjust to your personal definition of true blue water. 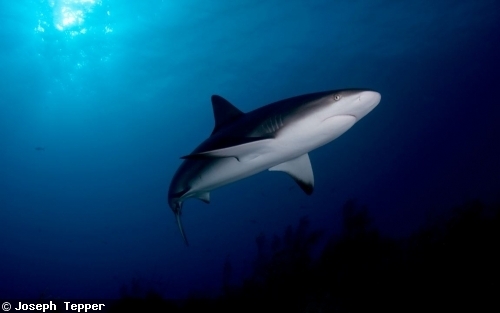 After finding a blue that meets your individual taste, while still maintaining a shutter speed that stops the shark's action, strobe position is the next major concern. At the start of the trip I began with standard strobe positions for traditional wide-angle photography: arms extended on each side, with strobes at 10 and 2 o'clock. However, as the week progressed and I allowed the sharks to come closer, I found that moving the strobes to a lower angle (more like 8 and 4) eliminated unwanted shadows underneath the subject. One major challenge of lighting sharks with strobes is finding the right position and settings that will properly light the dark dorsal side without over exposing the white underside. The best way to handle this problem is to keep one strobe over to correctly light the darker features of the back and face, while moving the second strobe to a lower position to independently eliminate the shadows on the underside.

Once you are comfortable with exposing sharks against a plain background, you might want to spice up your shots with a sunburst or two. Shooting sharks and sun balls can be challenging: the main problem lies in being able to freeze the action of the shark and perfectly expose the sun ball, while sufficiently lighting the shark with your strobes. In order to capture strong sunbursts we need to have a high shutter speed (it is fortunate that sharks already require high shutter speeds) and a high f-stop for that ideal spherical shape. Unfortunately, these settings can result in a poorly exposed shark. In order to compensate for the camera's exposure settings you may need to start with your strobes at full power, adjust as needed, and (you guessed it) get closer!

Another problem can be finding the right angle at which to compose a shot with both the sun and the shark. The best time of day for such shots is in the morning and late afternoon when the sun is lowest on the horizon. However, as the sun begins to rise higher into the sky, it is nearly impossible to compose a shot with the shark and sun burst. In environments featuring less favorable lighting conditions it can even be helpful to increase the ISO so not to compromise the high shutter speed or aperture needed for the sunburst. 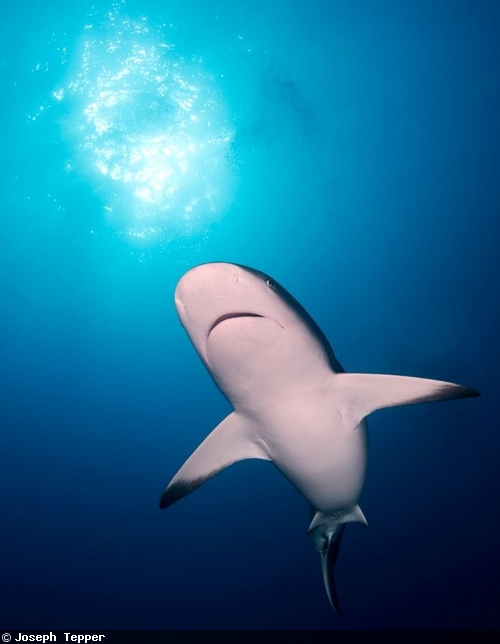 As is the case with any underwater subject, a pinch of luck can be equally as important as any other number of factors. My favorite shot of the trip, which features a large Caribbean reef shark and a friendly green moray eel, is a perfect example of such a phenomenon. In this case, numerous elements culminate into the overall effect of the shot: the curved and diagonal composition of the shark, the eel at the bottom, the hook in the shark's mouth, and even the half-sunburst at the top. I would love to say that sitting on the boat before the dive I planned the entire shot, but it would be far from the truth. In fact, the real credit for this shot should be given my buddy who pointed out the eel on the opposite side of the coral, which inspired me to compose the shot as seen in the final image. Putting the shark shooting routine practiced during the trip into effect; I metered the blue, framed the eel and sun, and waited patiently for the shark to come into frame. 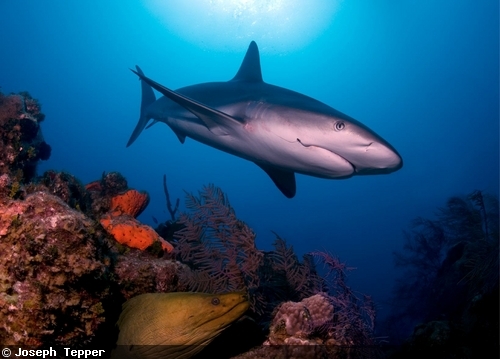 While article is certainly not the be-all end-all when it comes to shooting reef sharks in a semi-controlled environment, I can only hope that it provides a foundation for producing images that please divers and non-divers alike. While my love for tiny nudis, blennies, and other infinitesimal invertebrates may often be overlooked by much of society, I am comforted by recalling the moment when my buddy glanced at that shark and eel photo displayed on my camera's screen during our safety stop. The regulator nearly fell out of his mouth.