In this two-part article, physicist and underwater photographer Lynn Miner of Fire Dive Gear discusses the science and art of fluorescence photography. In this first installment, he details the physics and biology behind the fluorescence effect, and the technology you need to see—and shoot—this magical phenomenon. 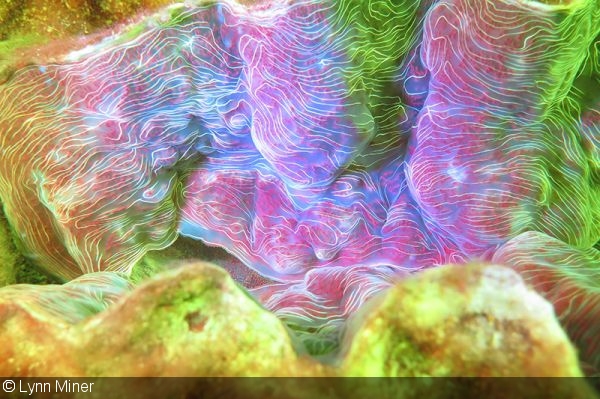 With fluorescence photography techniques, you can turn an ordinary dive into an extraordinary one, viewing the reef in a striking array of bright and bold colors. When illuminated with shorter wavelength blue light, biofluorescent organisms “emit” light with a longer wavelength. This is not reflected light such as when you take your white light torch on a dive. That “white light” is reflected off the reef and bounces back to your eyes or camera. Emission light is light the organism is creating and “emitting” back to you.

Not all marine creatures exhibit this effect, but in those that do, it can be very dramatic. Soft and hard coral structures, many shelled animals, coral polyps, anemones, and some fishes are all examples of species that fluoresce. In fluorescence, or fluoro, photography, one uses a blue light torch (or a strobe fitted with an excitation filter) to stimulate biofluorescence, while using a barrier filter to photograph the effect. Fluoro diving and photography isn’t only possible at night. It can also be done under certain daytime conditions—often with remarkable results. 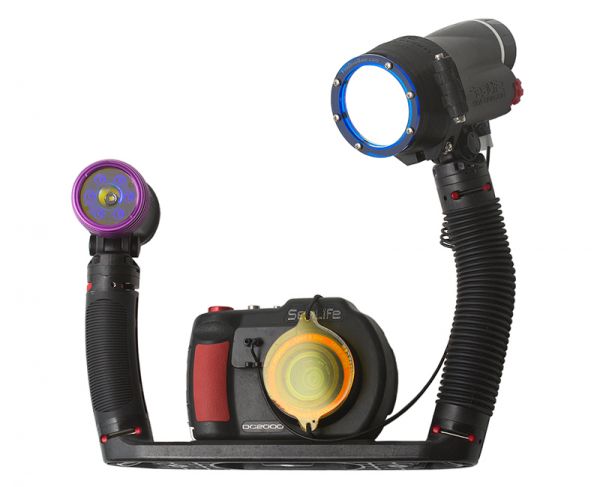 What Is the Physics at Play?

The visible spectrum of light is the thin slice of the electromagnetic spectrum visible to the eye. The “bandwidth” of light wavelengths the average person can see ranges from approximately 400 nanometers (nm), which is deep purple, to about 750nm, dark red.

When a high energy, short wavelength photon of light (blue, in our case) strikes a protein (referred to generically as a green fluorescent protein, or GFP), it absorbs that light energy. This causes the electrons of its constituent atoms to make a quantum jump from one electron shell to a higher shell. This change in energy state then “decays” (effectively instantly) back to its resting state or shell.

When this decay occurs, the electron “emits” a photon of light, but at a lower energy and longer wavelength. It also emits a minuscule amount of heat, hence the lower energy state of the photon. We call this conservation of energy—it must all balance out. The further the jump, the greater energy required to make that jump and the greater the difference in wavelength when the electron decays. These differences in energy show up as different colors. 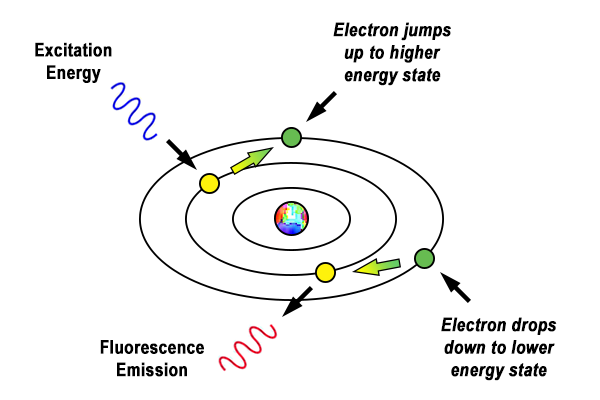 The physics of fluorescence

The wavelength of light used in most fluoro torches is a narrow band in the blue, somewhere in the range from 440nm to 480nm. It has been shown that blue light is much more efficient in stimulating fluorescence of GFPs and its mutations than ultraviolet light. This is because—as we all know from our Beginner Open Water Course—the only light available at depths beyond about 30 feet is blue. This is the light organisms have evolved in over the eons and what is available to them for photosynthesis.

What Is the Biology That Makes It All Work?

The part of the GFP molecule responsible for color is called the chromophore. The chromophore is an area in the molecule where the energy difference between two different electron shells falls within the range of the visible spectrum, as described above. The term “GFP” generally refers to the first protein discovered. Yellow, cyan and red fluorescent proteins are simply mutations of GFPs. 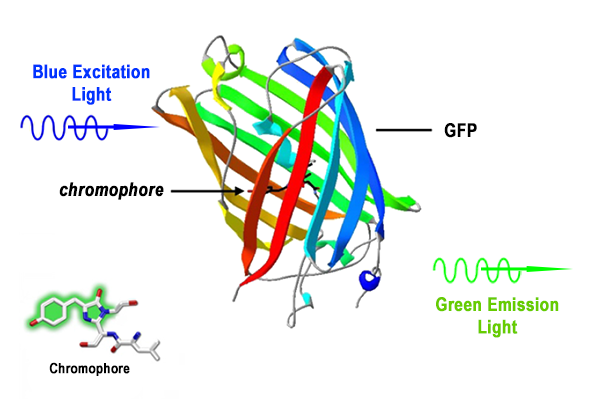 Schematic diagram of a green fluorescent protein, or GFP

It is not well understood why some corals and other sea creatures evolved to fluoresce. New results from scientific research show that many fishes, even deep-sea fishes, can actually see red light. It has been found recently that underwater organisms actually use fluorescence to transform the only light available to them, namely blue light, into visible light of longer wavelengths, such as red, for a number of purposes:

Theories as to why marine fluorescence evolved is a very active area of scientific research. Perhaps the most obvious answer to this question is that they simply do so because they are made up of elements that display the fluorescence effect. This may seem confusing, but consider this: Human teeth fluoresce as do the teeth of nearly all animals. What possible evolutionary pressure could be at work here? Perhaps none! Teeth are made up of elements that fluoresce—it may just be that simple. 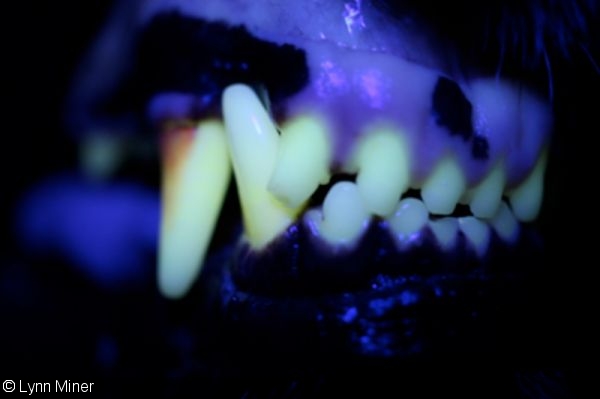 The fluorescing teeth of my labrador, Kara

What Are the Scientific Applications of Fluoro Diving?

Research at marine institutes and universities all over the world is currently underway not only to try to understand why some marine creatures display fluorescence (if in fact there is a reason) but also in the area of climate change as well as ocean temperature and acidification studies.

When water temperatures rise, coral bleaching occurs. Corals have a symbiosis with single cell algae called zooxanthellae. These algae use photosynthesis to provide food and energy to the coral. Temperature rises cause these zooxanthellae to be ejected, giving the coral a colorless, bleached appearance and taking away the vital nutrients the coral needs to survive. This makes it vulnerable to additional stresses that can ultimately destroy the entire reef.

Ocean acidification reacts with the coral’s calcium carbonate skeleton causing it to break down and dissolve. This, of course, can be seen under white light conditions, but it is even more dramatic using fluorescent technologies, thereby enhancing this field of marine research.

This technology can be used for coral propagation census (polyp bail-out). If you come upon a polyp or coral “recruit” release with white light, you will see little or nothing. With the proper fluoro diving gear, the individual nearly-microscopic organisms will shine on the sand like sparkles in the snow on a moonlit night—an amazing phenomenon to witness. In fact, there have even been discoveries of prior unknown species because they were too small to see with white light but shine like a beacon in the dark when illuminated with blue light. 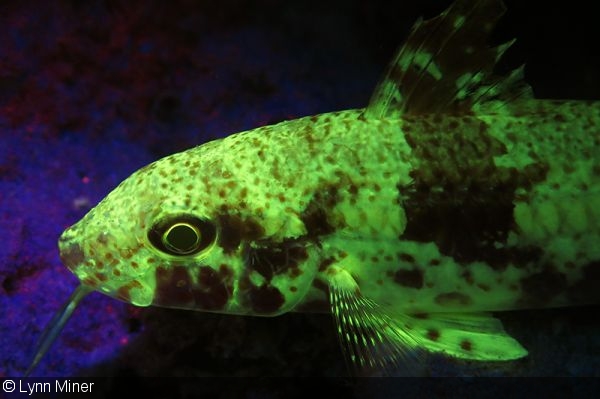 What Gear Do You Need?

A blue light torch, with an LED that emits light in the 450–470nm wavelength range, is required equipment for fluoro diving. Additionally, some fluoro torches include a dichroic filter to further enhance the imaging experience. These torches are commercially available at some dive shops, but since this is such a specialized product line, your best source is the Internet—simply search for “fluoro dive gear.”

Both of these images are taken with the same torch, but the image on the right had a dichroic filter installed. A dichroic filter has a dramatic effect on color saturation 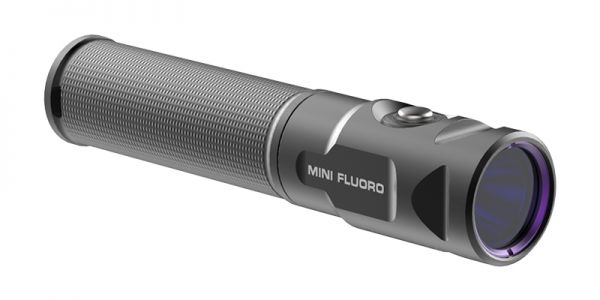 SeaLife’s Sea Dragon Mini Fluoro handheld torch features a dichroic filter, which tunes the light to the optimal wavelength for revealing the most vibrant fluorescent colors

Excitation filters are required for strobes and white light sources to make the required blue light. It’s usually a bad idea to try to use an excitation filter on a white light torch because you lose about 80% of the output power. This is less of a problem with a strobe because they output so much light, so even though they lose about 80%, there’s still plenty of light to get the job done in most cases—especially macro work.

When using blue light, you need a barrier filter to go over your face mask and camera. Blocking out the blue light is important because it is much brighter than the emitted fluorescence given off by the organism, so the colors you are looking to observe would be overwhelmed and washed out by the blue light. The barrier filter also prevents the blue light from entering your eyes, which can cause your eyes to burn and become irritated after a long period of time. 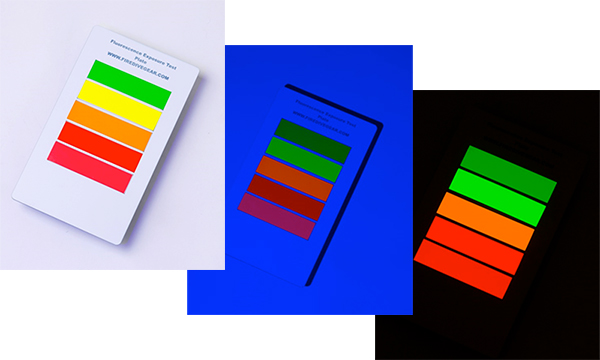 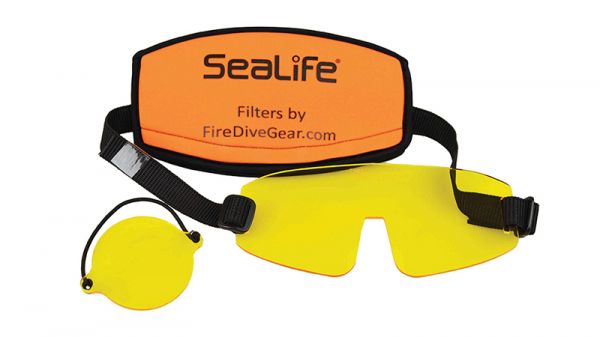 Generally, there are two ways of experiencing underwater fluorescence, either with invisible (ultraviolet) or with visible (usually blue) excitation light. Although using UV excitation light has the advantage that usually no filters are needed, it has been discovered that visible blue light is considerably more effective—by about a factor of four—at stimulating fluorescence than UV light. A detailed discussion of why that is can be found on FiveDiveGear.com.

If you decide to use UV, be aware that shining UV radiation into your eyes (or your buddy’s) may cause severe harm to you or your buddy’s eyesight, especially because this radiation is invisible and therefore the blink reflex does not work. Ultraviolet lights are not something you want to give to inexperienced divers to handle. By contrast, strong blue light (like any strong light) can also cause eye discomfort, but since you will immediately feel that discomfort, this is somewhat less likely to occur.

There are corals that do not fluoresce under UV light at all, while they do under blue light. This is presumably due to the fact that through evolution, underwater organisms have adapted to the properties of water, which is more transparent to blue light than it is to UV. Indeed, 95% of the UV from the sun bounces off the water’s surface, and the remainder only goes five feet deep or so before it’s completely absorbed.

Blue vs. UV: The image on the left is a target exposed to a UV torch, while the one on the right is the exact same torch only configured with blue LEDs rather than UV LEDs (no dichroic filter)

Of course, as everyone knows, if you ask 10 photographers about their opinion of what works best, you’ll get 11 very different answers. There is no “right way” to do this. Every camera, lens, torch, filter, and strobe combination is different. The key to success is experimentation. 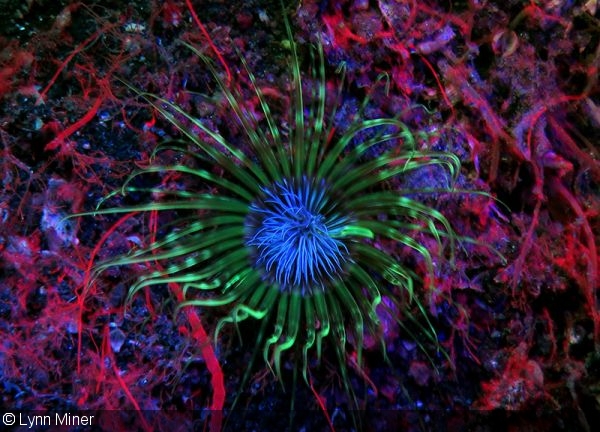 About the Author: Lynn Miner is a physicist and the co-founder of Fire Dive Gear, which manufactures precision fluorescence dive gear. He has recently worked with SeaLife Cameras to develop their line of underwater fluorescent lights. Originally NAUI certified in 1973, Lynn is a SSI Instructor Trainer, PADI Master Instructor, HSA Course Director, DAN instructor Trainer, and SDI/TDI Instructor.