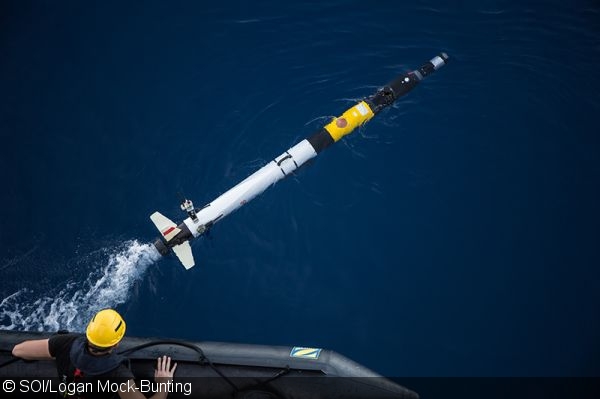 Andrew Durrant lets go of the Iver autonomous underwater vehicle during a ballast calibration. Its transceiver can be seen near its back fins and thruster

Heading out to the Timor Sea, we were warned about the sting of Irukandji jellyfish, the bite of sea snakes, and the cone snail’s toxic venom. But it was a slim chance we would encounter any of these dangers, since none of the humans aboard were even getting in the water. That would be the robots’ job.

The Coordinated Robotics expedition took place on Schmidt Ocean Institute’s research vessel Falkor (yes, named after the Luck Dragon in The Never Ending Story). Chief scientist Oscar Pizarro from the Australian Centre for Field Robotics, University of Sydney, gathered his team of highly regarded scientists from all over the world, including Woods Hole Oceanographic Institution (WHOI), Massachusetts Institute of Technology (MIT), the University of Rhode Island, and the University of Hawaii at Manoa. 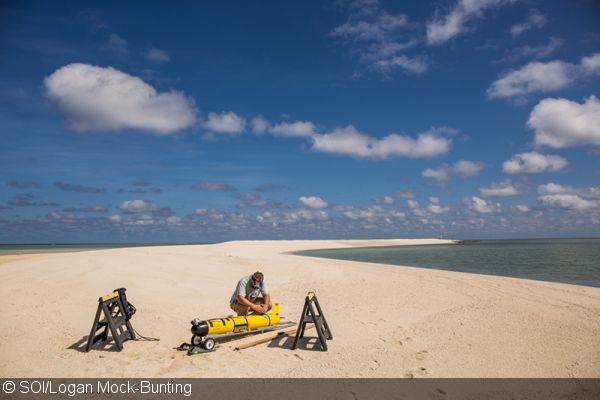 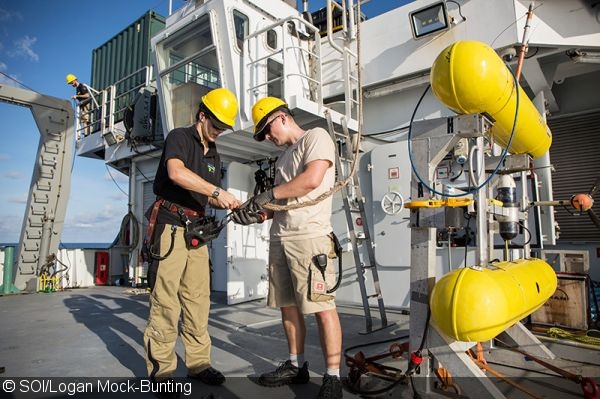 The researchers brought a wide quiver of robotic tools including autonomous underwater vehicles (AUVs) (gliders and Lagrangian floats) as well as autonomous surface vessels (ASVs). Today, the ability to explore the Earth’s last frontier is being spearheaded by robots, not humans. This range of robotic instruments was used as the eyes, ears, and hands of scientists. The AUVs could perform tasks such as taking photographs and collecting water measurements at various depths. The floats measured ocean currents and other parameters such as temperature or salinity, and the ASVs and gliders collected data as they moved up and down with the ocean’s waves.

In the Field with Robots

For two weeks, the crew worked in a remote area called Scott Reef in the Timor Sea, between Australia and Indonesia. Over this period, the science team was able to collect a huge amount of data, including approximately 400,000 images—about a terabyte of data a day! 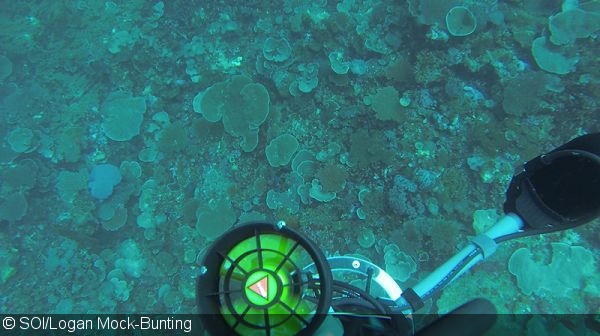 A Lagrangian float at work, drifting above reef making images for scientists to study and label

The photographs were collected from locations previously visited in 2009 and 2011, and will be added to a multi-year image library, providing valuable long-term monitoring. Additionally, the science team was able to use bathymetric maps collected using R/V Falkor’s multibeam echo-sounders to determine what areas were not well defined from existing data. Using the new high-resolution maps in conjunction with the data, the scientists were able to identify sites that were of most interest and target them for surveys with AUVs on board.

The photography created from these AUVs is utilized in very unique ways to further conservation research. Many of the images were taken with a stereoscopic camera setup in a very precisely navigated grid. Photographing stereoscopically allows depth space calculation, which can be used to create 3D maps. Some of this imagery and its corresponding maps have been gathered into a mesmerizing iOS app called SeafloorExplore.

This app visualizes 3D models of the seafloor, letting viewers control a completely unique experience, giving not just a view from above the reef, but a controlled “flight” through the growth of coral. Besides being a much more exact research tool, this interactive data set is an amazing experience for casual viewers and ocean lovers. 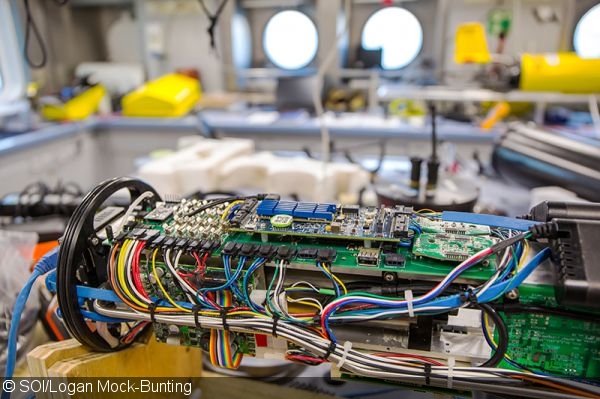 Preparing the instruments for the cruise: The wiring for URI Lagrangian photo-float in the wet lab on R/V Falkor

Pixels on hard drives don't always paint the picture of what is going on, so in order to make scientific conclusions about the data, the scientists and engineers need to abstract images into quantitative information that is usable. However, with so many photos being taken by the robotic vehicles, there are simply too many images to keep up with. To combat this issue, the team trains computers to assist using computer algorithms.

Australian Centre for Field Robotics post-doctoral research engineer Ariell Freedman has developed a citizen science website using the images collected from the AUVs. The Squidle site allows participants to help label images of coral reefs and the ocean floor. Using the public to tag these images will help provide more examples to the computer algorithms, increasing the computer’s accuracy with more examples. Essentially, the team can harness the power of the public to improve image tagging accuracy that will eventually be refined by computers.

Dr. Freedman and the team hope that this can be a fun and educational tool that allows students to engage in real science. Once they have a large number of labels, the scientists will conduct rigorous analyses to validate the data for training machine learning algorithms. It could open up very interesting avenues for future research. 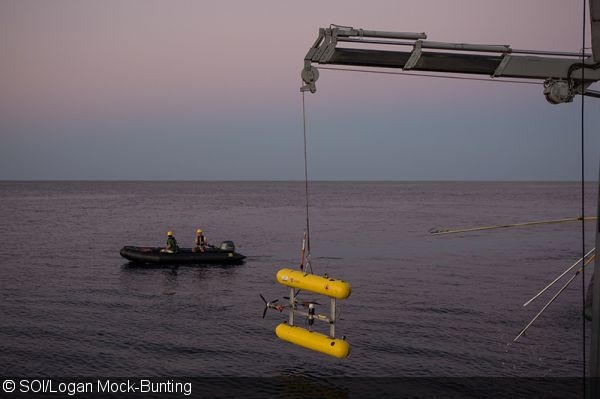 The Future of Marine Research Imaging

With all the imagery and data being collected, the right tools are absolutely necessary to collect and process the information. This year, Schmidt Ocean Institute installed a cluster of interconnected high-performance computers on board R/V Falkor, making her the first research vessel with a supercomputing system available to scientists during research cruises.

R/V Falkor’s high-performance supercomputer enables collaborating scientists to model complex physical, biological, and other dynamic processes with unsurpassed resolution while at sea. With immediate access to outputs of large scale numeric simulations running on the shipboard high-performance computers, scientists are able to respond to natural ocean dynamics and variability in an informed and rapid manner. The high resolution of shipboard simulations enables scientists to plan their data collection activities with greater precision, and carry them out with higher accuracy, productivity, and efficiency than would have been possible with traditional approaches. 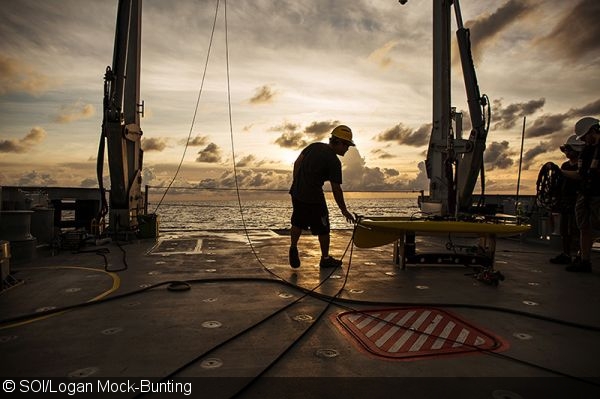 The main advantages to using AUVs and other underwater robots instead of human divers are primarily logistical: These tools can stay underwater longer, as well as be more exact with data gathering and keeping a precise plotted course. However, without human interpretation, the data and imagery they collect are simply numbers. And beyond that, even carefully mined and polished information alone cannot be a catalyst towards action.

Conservation depends on compassion, action and information all coming together in a meaningful way. So while machines may be taking our spots underwater in collecting information, we don’t have to worry about the robots taking our places as stewards of the ocean—at least, not yet. 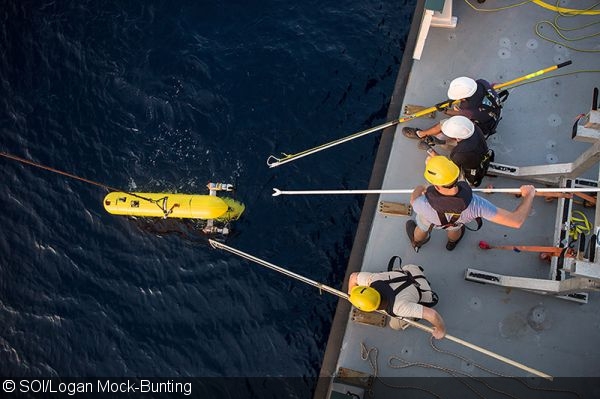 The crew prepares to retrieve AUV Sirius after a mission. This is accomplished by using poles to attach lines to it and then lifting the vehicle on deck via crane 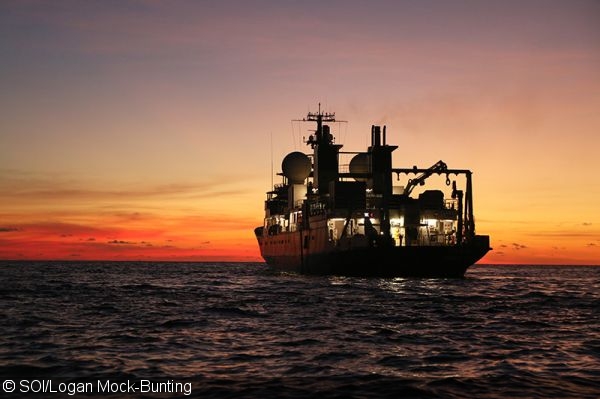