This Critter Corner will be dedicated to an entire genus, Rhinopias spp., rather than a specific species.  Rhinopias belong to the Scorpaenidae family, which also includes other underwater photography favorites like lionfish and stonefish. There are 6 different species of rhinopias, all of which have long been considered to be among the holy grails of underwater photography.  Although each certainly has a unique appearance, they are similar enough that the same photography strategies can be applied to the entire genus. 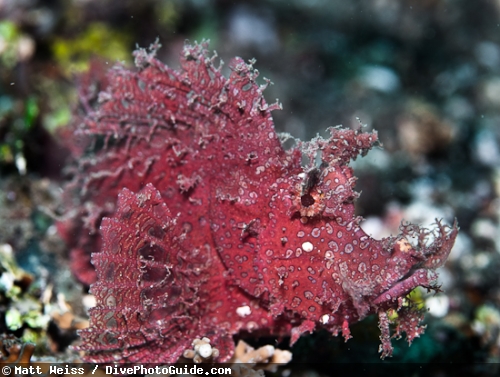 All the species are considered to be rare, but by far the most commonly encountered species amongst underwater photographers are the paddle-flap and weedy rhinopias.  It has been suggested that the paddle flap rhinopias is actually a variant of the weedy rhinopias rather than it’s own species, but currently they  are classified as two distinct species.

As with all rhinopias, they both contain the common characteristics of the genus: laterally compressed bodies, eyes on top of their heads with dermal appendages above them, and a various amount of appendages coming from its body.   Rhinopias can vary in color and in size, maxing out at around 23 cm or 9 inches.

The color varieties among rhinopias can be quite drastic, ranging from dark red, to bright yellow to deep lavender. Additionally, the amount of dermal appendages extending from their bodies often varies, giving each rhinopias a somewhat unique look. That said, everyone of them is certainly oddly beautiful in it’s own right, and most discerning macro photographers can remember their first encounter with one. 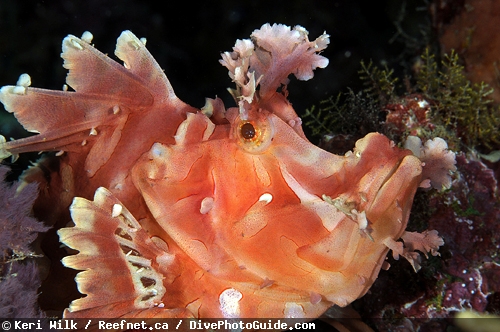 It has been argued that this is just sexual dimorphism in individuals of the same species,  and there have been many photographs of what appears to be paddle-flap and weedy rhinopias pair.

Although the often bright colors and odd shapes may make the rhinopias sound conspicuous, it is actually these features that make it very cryptic. Finding one is often most the most difficult part of obtaining a rhinopias photograph.

Location:  Most commonly sighted in South East Asia. Live only in the Pacific.
Depth: Found down to 300 feet.

Behavior: Bottom dwellers, rhinopias rarely swim, but rather “hop” around the seafloor using their pelvic and pectoral fins. Rhinopias are predators and usually rely on their camouflage to stalk prey.  They will remain motionless until the unsuspecting victim comes close enough for them to lunge towards and swallow.

No extra equipment is needed for rhinopias. Their large size means that an additional macro wet-lens is not needed.  A good strobe to bring out their colors and textures is recommended.

A macro lens with a relatively wide angle of view is recommended. A 60mm is an excellent choice.

At least one strobe is required to bring out the colors of the rhinopias. Using two strobes allows for more control over the lighting, which can be helpful in bringing out the intricate textures of the animal, as well as help in creating contrast between the subject the background. 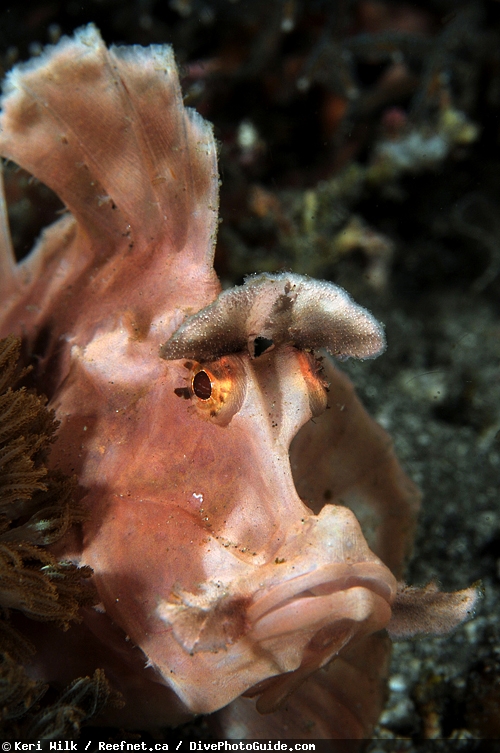 Get as close as possible.
If using a compact camera, get as close as your cameras minimum focus distance will allow.  If you want to increase the size of the rhinopias in the frame, use your cameras zoom function to zoom in.  It’s important to use the zoom after getting physically close, because you want to minimize the amount of water between the camera and the rhinopias. This will allow your strobes to fully illuminate the subject and make their rich colors pop.

If using an SLR, use a lens with a suitably wide field of view for a subject that’s almost a foot long.  A 60mm macro, even with a cropped sensor, is an ideal lens. This will allow you to fit the full rhinopias in the frame, but still be close enough to properly light it. Note – if you do have a 100/105mm macro lens on, try a face portrait shot, as they can be equally as striking. 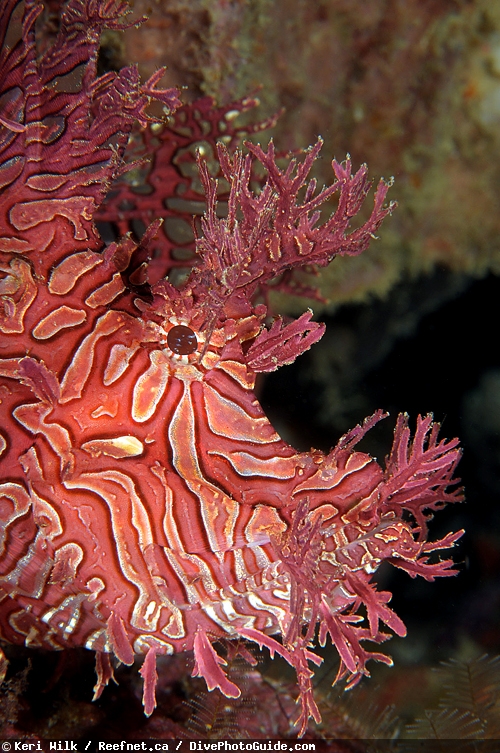 Be Patient.
Rhinopias often are found motionless or moving very slowly. Even though it’s very exciting to see a rhinopias, relax and think about your image.   Don’t just start firing away. Think about the composition, and especially the lighting of the image.

If you are really patient, you can try and catch the famous “rhinopias yawn.” Every once in a while a rhinopias will stretch its mouth out as if it is yawning, making the already bizarre looking creature that much more strange. Some of the best rhinopias images are of yawning shots.

You will likely only get one shot at a yawning rhinopias, so make sure your settings and lighting  are dialed in before it happens.

Be aware of the background.
Rhinopias are well camouflaged, and that means it can be tricky to create pleasing contrast between the subject and the background.  Side-lighting and snooting are good ways to bring out the colors and textures of the subject, without lighting up the distracting background. 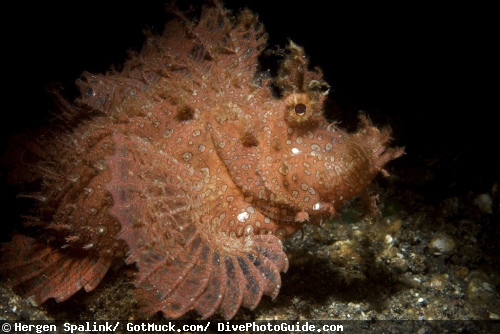 There are only so many ways to shoot a rhinopias, and many images are very similar. Fortunately, a rhinopias is such a spectacle, that even a common shot is capable of wowing an audience.  Experimenting with creative lighting is a good way to separate your photos from apart from others. Try turning a strobe off and using extreme side lighting to create ominous shadows, or use a snoot to create a spotlight effect. 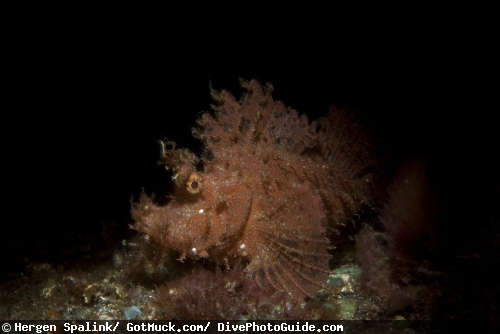 Also, consider focusing on the patterns of the rhinopias. They can be quite detailed and intricate, making for an interesting pattern shot.

Lastly, if you are both patient and lucky enough to catch a shot of rhinopias yawning, it will make for a spectacular shot.