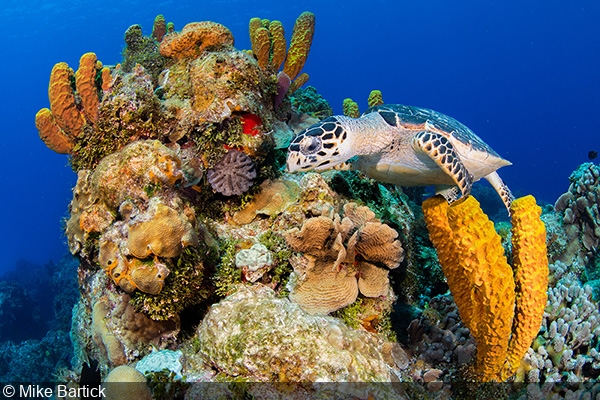 It’s been almost a decade since Sea&Sea’s YS-D1 strobe hit the market, replacing the popular YS-110α. The YS-D2, introduced a few years later, brought additional refinements, with sturdier controls and a redesigned battery compartment. This was later followed up with the YS-D2J, with production moving to Japan (hence the name tweak), ostensibly to resolve issues reported by some shooters such as blown flash bulbs and inconsistent firing. Since then, the YS-D2J has proven to be a popular choice among underwater photographers unwilling or unable to stretch to a high-end strobe, including Sea&Sea’s own flagship YS-250PRO.

In 2019, at the DEMA Show, underwater shooters were finally treated to the unveiling of the long-awaited third incarnation of the strobe, the YS-D3 Lightning, a name that clearly stated Sea&Sea’s aim to create a strobe that was quick—and reliably so. And with the retirement of the venerable YS-250PRO (my workhorse strobe of choice), the YS-D3 Lightning became the Japanese company’s new flagship flash.

Unfortunately, what happened next—the global pandemic—put the brakes on using and testing the capabilities of the YS-D3 Lightning. But eventually, at the beginning of this year, I finally got my hands on a pair of the new strobes, and started planning to get them underwater and see if they lived up to their “Lightning” moniker. 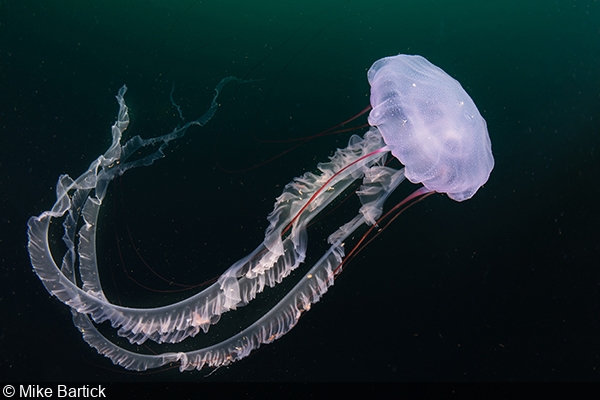 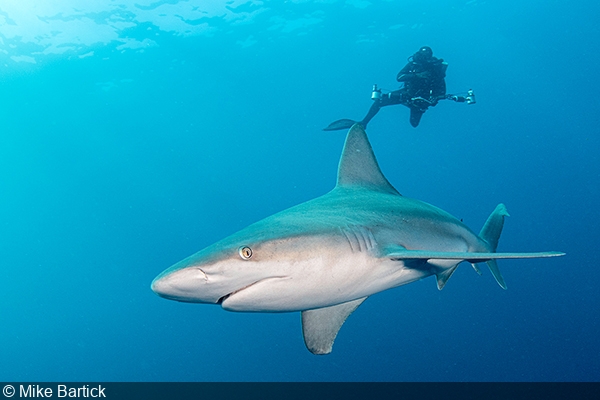 The YS-D3 Lightning strobe was designed by Sea&Sea from the ground up as a new flagship strobe and not a redesign of the YS-D2 series. The innards of the strobe include a precision ground aspherical shape troidal lens, which allows the dual flash elements to increase the guide number slightly—from 32 for the YS-D2(J) to 33 for the YS-D3 (measured on land) while also aiming to spread the beam smoothly and evenly without the need for a diffuser. The strobe also has a simple-to-understand user interface and has the flexibility to be fired using either fiber-optic cables or electronic sync cords.

In addition to upping power output, Sea&Sea engineers have overhauled the electronics. Larger capacity condensers and a newly designed charging circuit are designed to increase reliability and durability, and decrease the lag time between flashes or recycle times. In addition to the newly designed inner workings, the strobe head also underwent some external design changes, include a collar for bayonet mounting their accessories.

New accessories for the strobe, which mount bayonet style, snap into place and are very secure, include:

The YS-D3 Lightning ships with a YS base mount, straight base mount, and the standard diffuser. 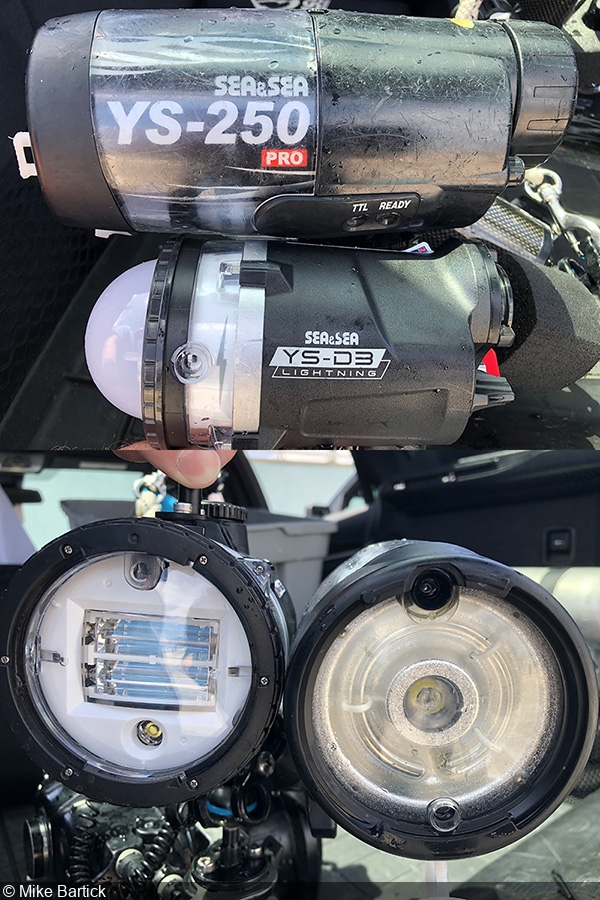 The YS-D3 Lightning has big strobe attitude, packs well for travel, and performs like a larger strobe: It’s more robust than the YS-D2, but lighter and more compact than the (now discontinued) YS-250PRO 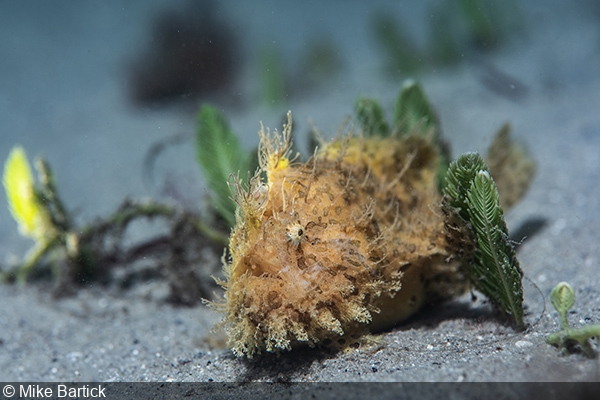 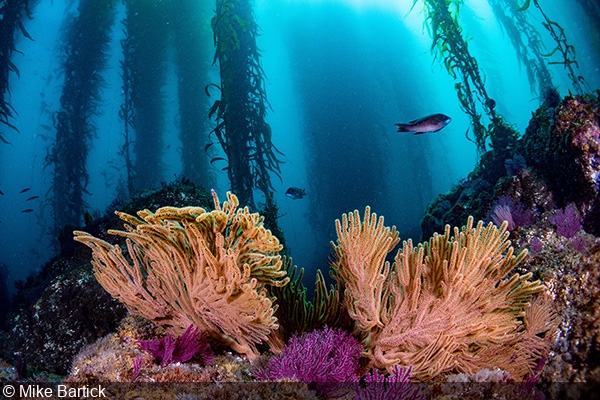 I’ve been using the YS-D3 Lightning strobes in a variety of scenarios over the last few months in California, Florida and Cozumel. From macro to wide angle, blue water to blackwater, chilly kelp forests to sun-dappled reefs, I've dived from shore and by boat, I’ve trudged through parking lots, and I’ve been humiliated by breaking waves trying to get out of the water a few times. Here are my impressions of how the strobes performed.

The colored backlit panel on the YS-D3 Lightning makes it very easy to see which mode you’re working in at a glance. 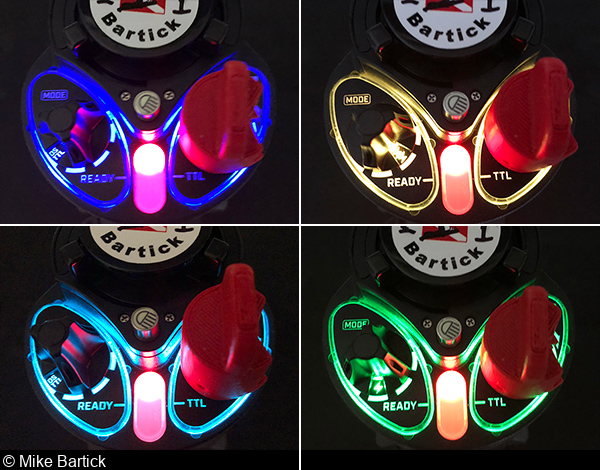 My general rule of thumb is to swap batteries after two dives—no matter what—but with the YS-D3 Lightning strobes, I’ve gone three dives without any issues. Using standard Eneloop Ni-MH 1900mAh batteries, I achieved 200 to 225 flashes at full power. This increased to more than 275 flashes at 75% power. And shooting a typical combination of macro and wide angle at 50% and 75% power, I could comfortably do three dives before swapping batteries. 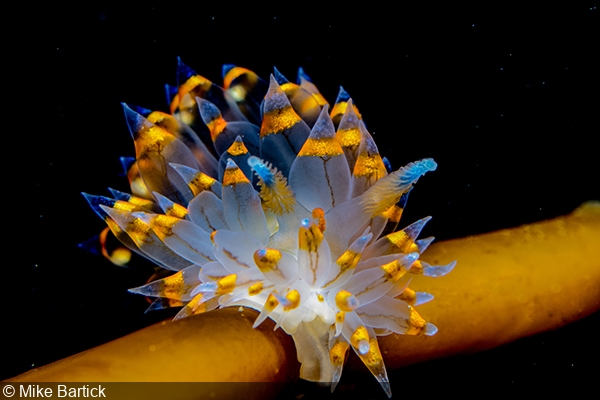 Janolus nudibranch, California: These slugs really pop against a black background. Using inward facing lighting and the standard diffusers, the strobe’s beam angle is very easy to control, even when your subject is near a reef (Nikon D850, 60mm lens, dual Sea&Sea YS-D3 Lightning strobes on 75% power, f/22, 1/160s) 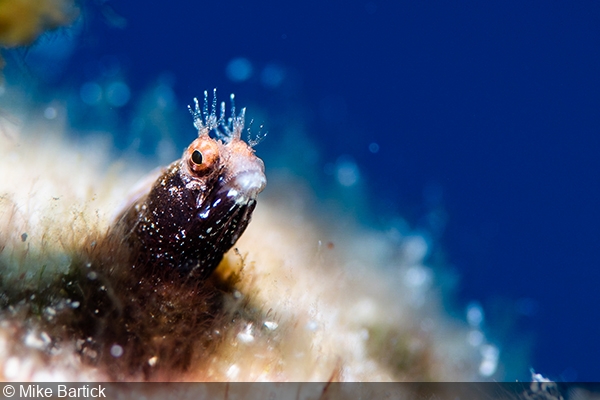 Blenny emerging from a crevice on the reef, Cozumel: Strobe power is easy to manage without looking at the power selector. Positive clicks step up or down, making dialing in the output very easy (Nikon D850, 105mm lens, dual Sea&Sea YS-D3 Lightning strobes on 75% power, f/8, 1/80s) 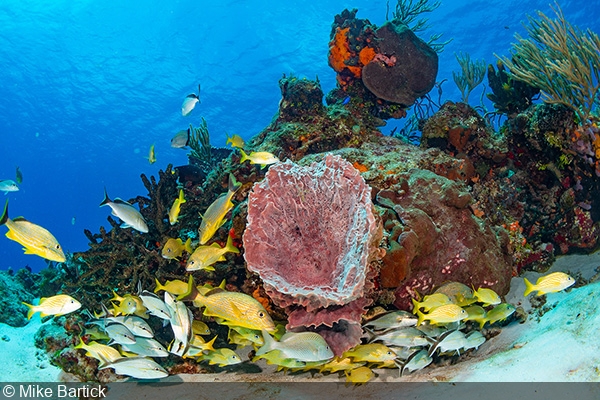 I tried all of the accessories available for the YS-D3 Lightning and found that the strobes generally performed well in a variety of conditions with all of them. 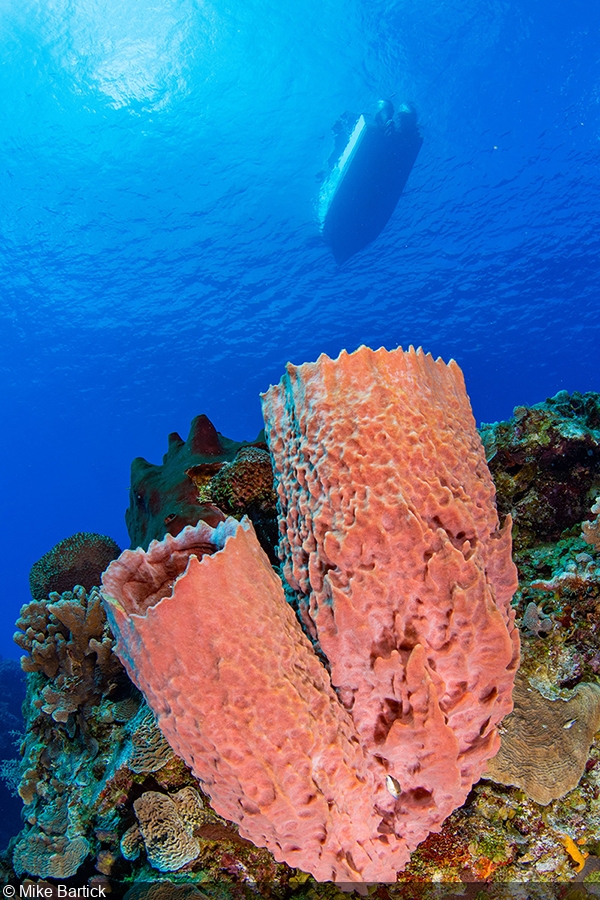 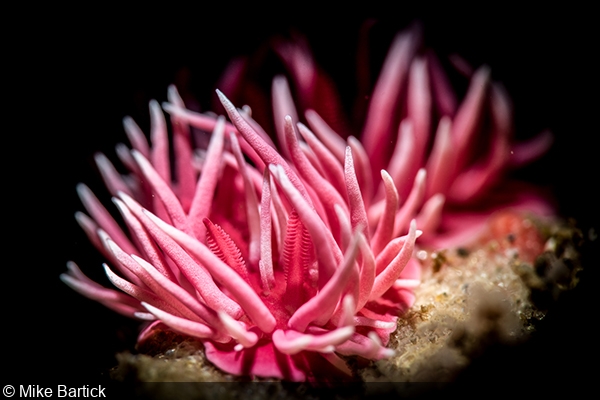 The YS-D3 Lightning works extremely well for blackwater photography. Shooting at 50% power with the dome diffuser has allowed me to up my game a touch, with better exposures and faster recycle times. Transparent subjects can be tough to expose well and shooting them is counterintuitive: Less power actually results in a better exposure at open apertures, and with the YS-D3’s fast recycle times, you can fire away at will. 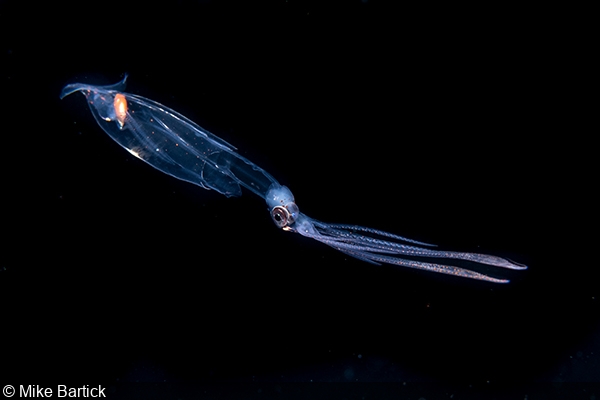 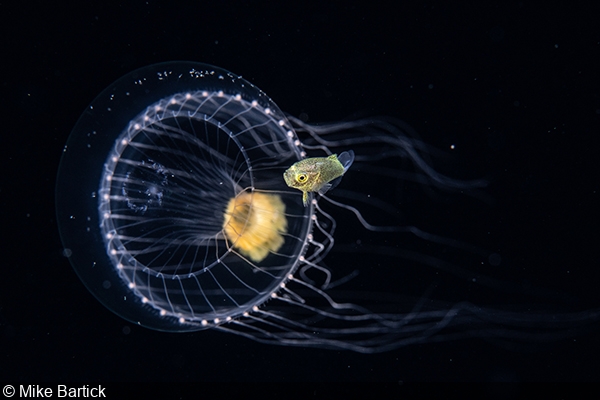 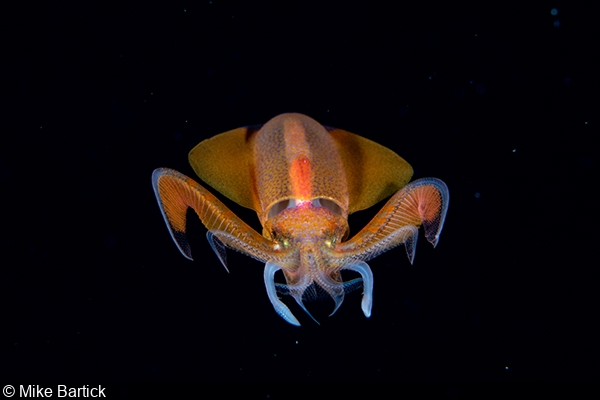 A diamond squid flush with incredible colors, deep in the Gulf Stream off the Atlantic coast of Florida (Nikon D850, 60mm macro, Sea&Sea YS-D3 Lightning at 50% power and with dome diffusers, f/14, 1/200s) 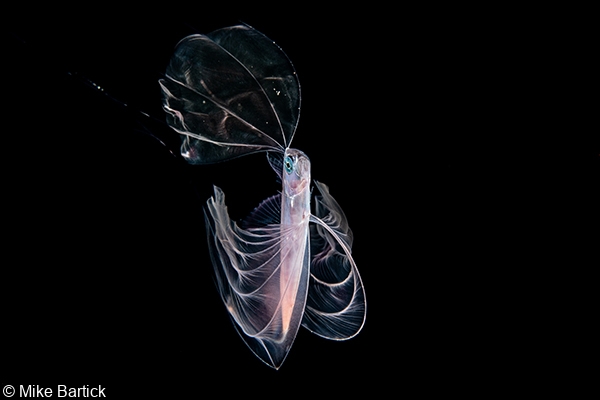 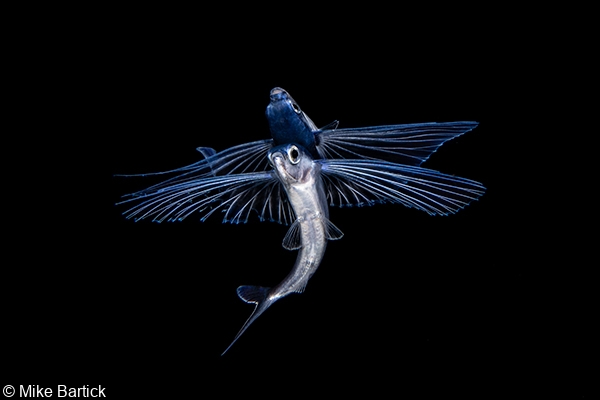 One of the things that keeps me coming back to the Sea&Sea brand is the reliability of their products. The YS-D3 Lightning is durable in everyday use and easy to operate, and offers consistent performance regardless of conditions. I should also confess that I unintentionally tested the strobe’s ability to handle a flooded battery compartment… And it turns out that after a quick rinse and battery swap, the strobe worked like a charm again!

Having said all that, some YS-D2 users will recognize that there is a huge elephant in the room in regards to that strobe’s known reliability issues. While these problems were rectified in the later YS-D2J model, I believe that the new YS-D3 Lightning strobes will further restore any lost faith in the Sea&Sea brand. 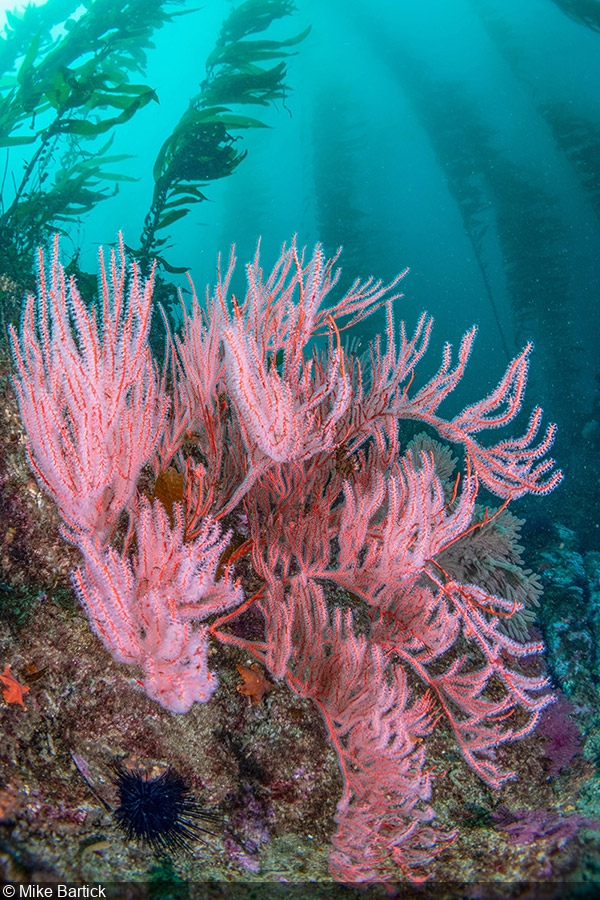 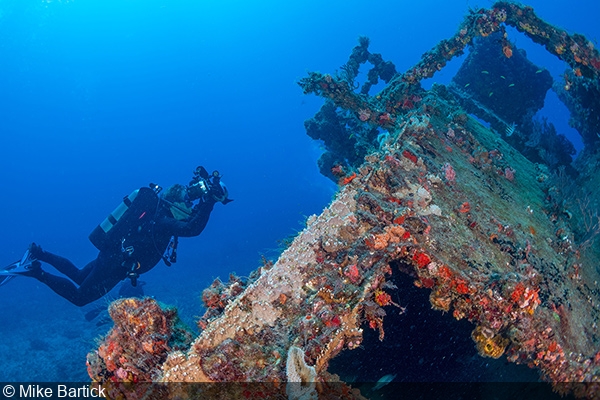 Blue water, blackwater, green water, macro or wide, I’ve found the YS-D3 Lightning strobes to be fast, responsive and accurate. With quick recycle times, the strobes are a pleasure to shoot, while the dome diffusers add a level of forgivingness and beam spread that I’m very happy with overall. I found myself excited to dive with these strobes and felt that they could take whatever I demanded of them. Their simple, travel-friendly design makes them an even easier choice, whether you’re doing local shore dives or trotting around the globe.

The retail price ($850) positions the YS-D3 Lightning on the strobe market well, too, coming in much less expensive than many of its high-end competitors. I’m confident that the YS-D3 Lightning will continue proving itself to be a worthy new flagship strobe for Sea&Sea. 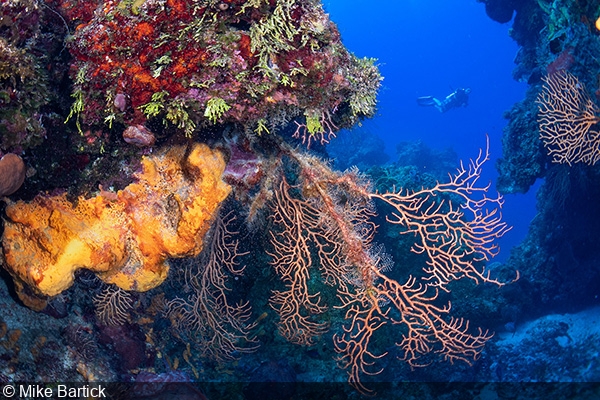 syara walter wrote:
I am affected by your photography skills.

Jauntio Martin wrote:
I am also planning a trip this year