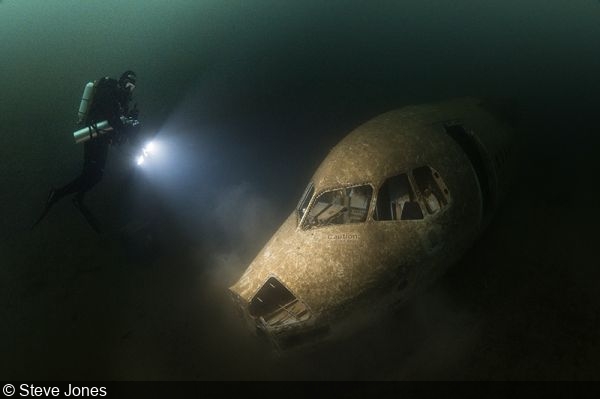 Convey a sense of discovery in your images. After all, that’s one of the main reasons we dive wrecks!

If someone had once told me that my fascination with maritime history would lead to me bringing back wreck images from deep, cold water shrouded in poor visibility, awash with strong currents, on dives with seemingly endless decompression stops, I might have thought twice about the direction my photography was heading! Yet despite the daunting nature of assignments which have sometimes left me wondering midway through a trip whether I’m going to get any shots at all, this niche has led to some of my most exciting dives as I’ve tried to come back with a fresh story on something rarely photographed.

Facing up to the challenges of photographing deep, dark wrecks has changed me as both a diver, photographer and storyteller. First, however, I had to master the general principles that support good wreck photography, for unless these were second nature, I would have no chance of bringing back the shots when dealing with the additional stresses caused by challenging diving conditions.

Here are my top tips for improving your wreck photography, regardless of how deep you choose to venture: 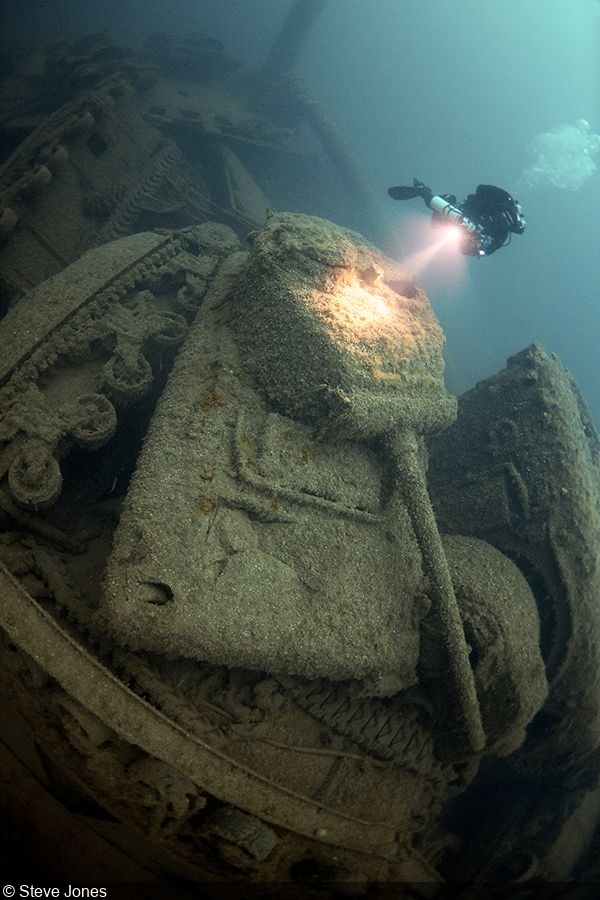 Sherman tanks on the Empire Heritage lying at 220 feet, Ireland: A properly briefed model should know exactly where to aim their torch!

I like to capture as wide a view as possible—even the whole wreck if visibility allows—so I use ultra-wide lenses. Fisheye lenses are my number one choice for capturing huge areas and they are also useful when working in confined spaces such as wreck interiors. One drawback is that fisheye lenses bend straight lines, so rectilinear zooms such as a 16–35mm are also good to have, even though they get much less use. 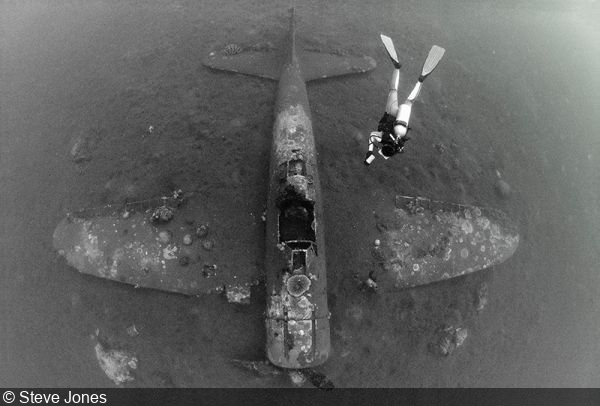 Mitsubishi Zero fighter, Kimbe Bay, Papua New Guinea: You’ll need an ultra-wide or fisheye lens to get close to your wreck subjects and still fit them in the frame 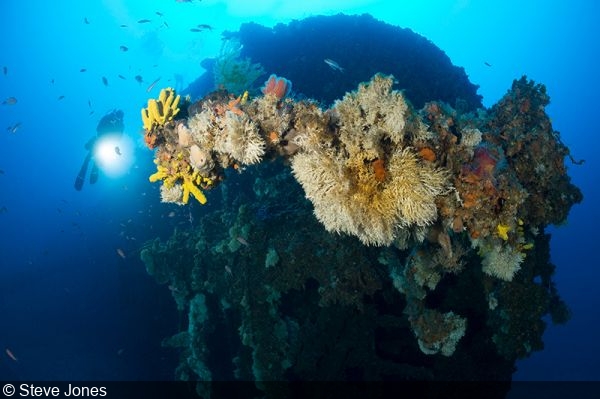 Vasilios wreck, Vis, Croatia: If the wreck is just too big to fit in the frame, choose interesting areas to light and photograph

With a photojournalist’s mindset, I am trying to tell the story of the wreck via my imagery, so planning is essential—or else I could end up with random shots of unrecognisable rusting metal! First, I research the history and get an idea of the layout of the wreck and what elements I want to photograph, talking to people who have dived it. There is nowhere where this is more important than on a deep dive when I may only have a short time to nail the images. If possible, I try and get the images of the full wreck early in the dive before the visibility is disturbed. Importantly, I discuss the plan thoroughly with my dive partner, who will often be helping model for me. They need to know what I have in mind! 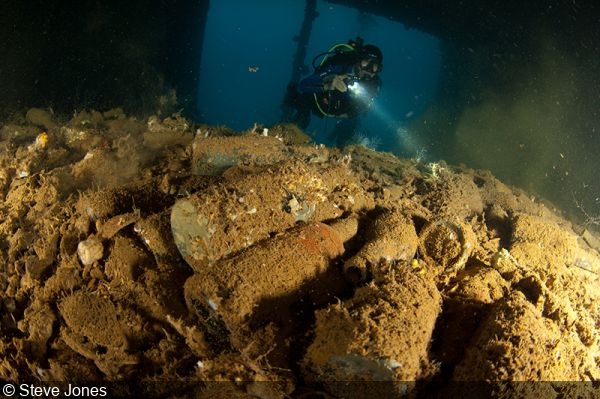 Artifacts on the Shinwa Maru, Manokwari, Papua: Consider the story you want to tell with your images

Find a recognizable feature to focus on rather than random wreckage. Winches, guns and propellers are a good start and may even become my main shots if the visibility is not good enough to capture the whole wreck in one image. Find elements that tell part of the story such as lifeboats that failed to launch or guns trained to the sky in one last act of defiance. Doorways are excellent for framing images. Know what wildlife lives on the wreck. Fish schools, eels and corals will show that a wreck has regenerated from disaster into a living reef. 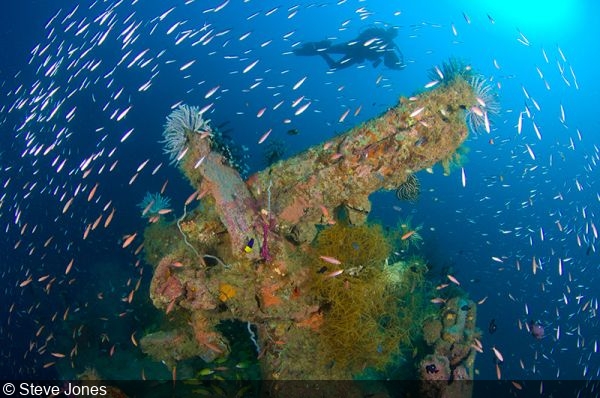 Models—whether divers or marine life—help add interest, scale and three-dimensional depth to an image. A diver using a light to guide the viewer’s eye to the main subject is a useful modeling technique, but I also use models as lighting assistants, equipping them with high-powered LED lamps to illuminate distant areas of the image. I use divers to help create the sense of exploration, adventure and discovery that I am trying to convey with my images. Good communication with your model before and during the dive is essential. Agree signals for maneuvering, talk about the plan, tell them where to look (i.e., not into your lens!), how to pose (i.e., elegantly!), configure their kit (i.e., no dangling gauges!) and where to point the lamp. 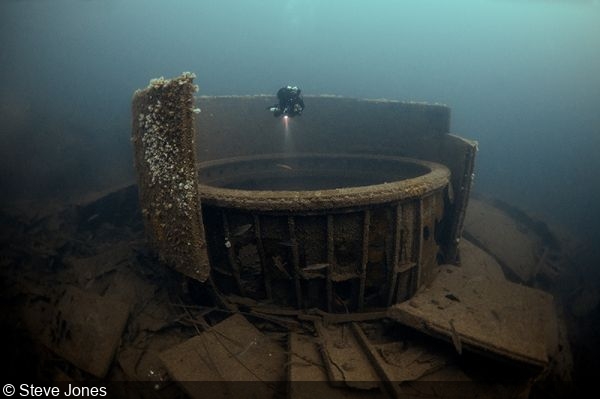 Turret armor (Barbette) of HMS Audacious, lying at 215 feet, North Atlantic: Convey a sense of scale in your images by using models 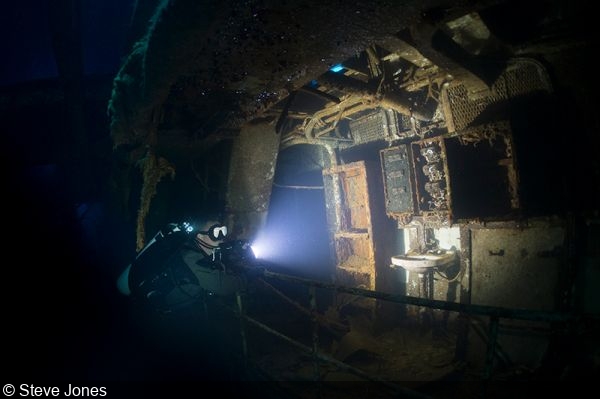 Your models can help with lighting. This image was lit with LED lamps rather than strobes. I lit the model using the spot beam of my own dive light held in my left hand, whilst he lit the rest of the scene. A neutrally buoyant camera rig also helped, as I held it with one hand

5. Be Where Others Aren’t

Other divers and their bubbles can ruin your composition, so keep them out of the shot if they are not intentionally part of it. Wherever possible, I always aim to jump first and work quickly, especially if the wreck has sediment, as once this is kicked up it can take a while to dissipate. Good buoyancy control is essential to avoid silting up a wreck. Go for clean compositions where you isolate your subject from the background clutter. 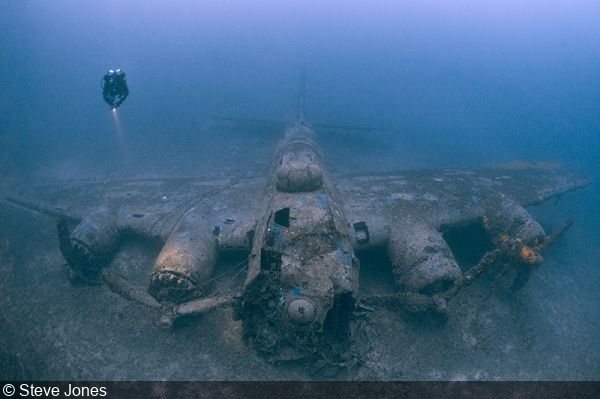 B17G Flying Fortress, Vis, Croatia: This image was taken at 235 feet and was the shot I went for as soon as we descended—before other divers arrived

Wrecks offer vast areas to light and can prove a challenge if you choose the wrong technique. There are three ways to light a wreck, which can be used in a variety of combinations:

Mastery of ambient light photography is paramount when shooting wrecks, whether used in conjunction with artificial light or on its own to create color or black-and-white images. I briefly study the way that light is falling on the wreck before I start shooting, seeing where the shadows and highlights are. Most of my deep-water images are shot only with ambient light, but this results in a strong blue or green color cast that must be removed during post-processing. I use a complex technique that’s too involved to explain here, but setting of the color temperature/white balance when processing your images will normally help. Above 130 feet, filters can help maintain rich colors without needing flash. When inside a wreck, look for shafts of light, which can help create a wonderful atmosphere in your image. 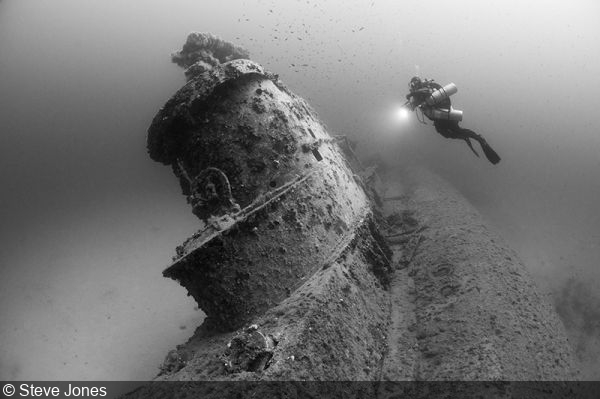 HMS Stubborn, lying at 180 feet, Malta: With deeper wrecks and only natural light, consider converting to black and white to give an image more punch

Underwater strobes are useful for bringing out the color of close-up areas of wrecks, less than 10 feet from the photographer. However, don’t try and light up an entire wreck with flash as the light output won’t have the range. One way around this is remote triggering of strobes, whereby multiple units mounted at distance on the wreck are triggered with slave sensors to create artistic light. These are becoming of less use with the emergence of high-powered LED lamps, which are easier to set up and don’t need a strobe mounted on your camera to trigger (which can create backscatter). 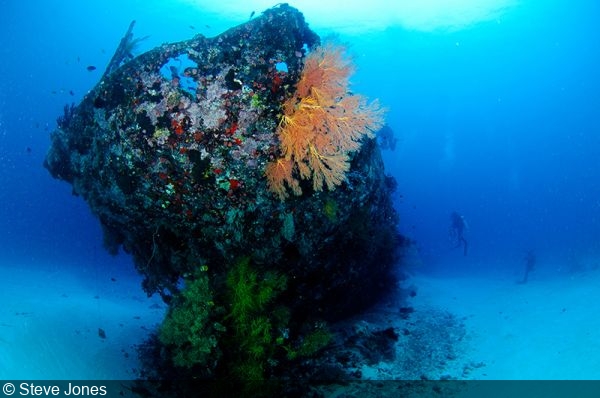 Cross Wreck, Manokwari, Papua: Strobes have a limited range and their output should be balanced with available ambient light

Off-camera lighting techniques are far easier since the emergence of powerful LED lights. My lighting arsenal includes multiple small and portable 12,000-lumen lamps that can be readily deployed around a wreck, and an ultra-powerful 22,000-lumen Orcalight for when I want to bathe a wide area. Using remotely positioned continuous light is one of the most creative and fun forms of wreck lighting and allows you to bring out color and highlight details that are too far away to light with on-camera strobes. Experiment with this type of lighting and you will find that even though it requires a bit more effort, the possibilities are endless. 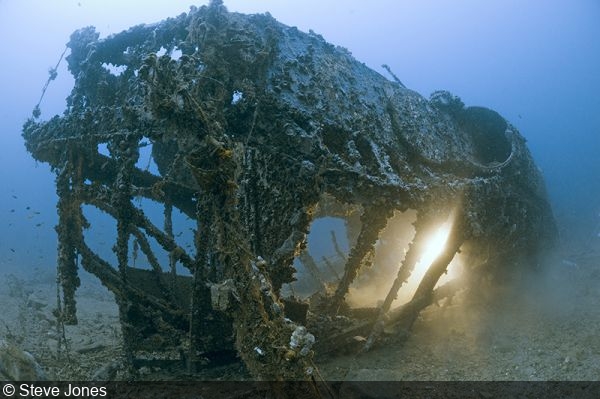 Using off-camera lights can help emphasize shape and form. This German Torpedo boat lies at 215 feet in Malta and is lit from the inside with a 22,000-lumen Orcalight 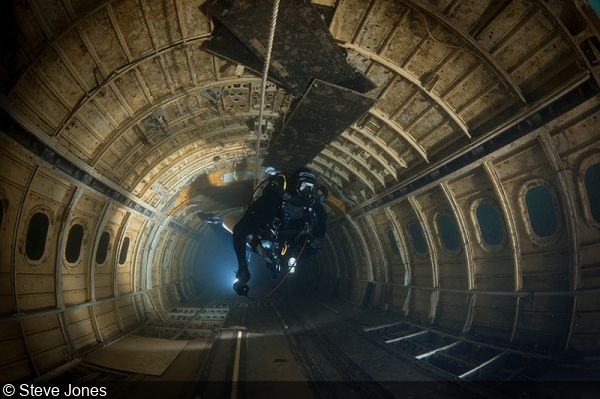 In this image, I’ve lit the forward area of this aircraft interior using a 22,000-lumen Orcalight, whilst the diver has a second Orcalight pointing backwards to light the aft section, creating much more depth to the image

I practice techniques constantly, using inland sites to experiment until I have them nailed down. Never waste important time on a trip trying out a new technique: Get it right beforehand and the higher the image yield will be when it really counts. If the opportunity arises, dive the same wreck at different times of the day. You will be amazed at the difference a few hours of the sun’s movement across the sky can make to a scene, revealing new secrets on the wreck. 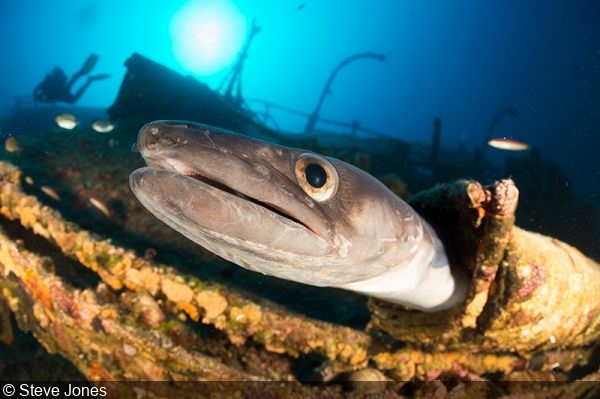 Teti wreck, lying at 100 feet, Vis, Croatia: For trickier shots like close-focus wide-angle images, make sure you have perfected your technique beforehand

8. Get Creative with Your Composition

Once you’ve mastered how to get nice shots on wrecks, you need to unleash your imagination to create great images. Using creative lighting techniques is important to make your images stand out from the crowd, but composition is equally important. Wrecks are full of elements that can aid your pursuit of a striking and unique image. Adjusting how you “see” a scene can make all the difference between a good shot and a timeless one. 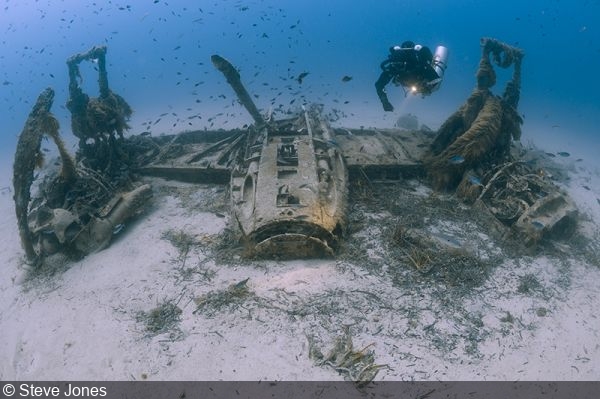 RAF Beaufighter Strike Aircraft, lying at 130 feet in Malta: Whilst this front-on composition is popular with magazines for double-page spreads… 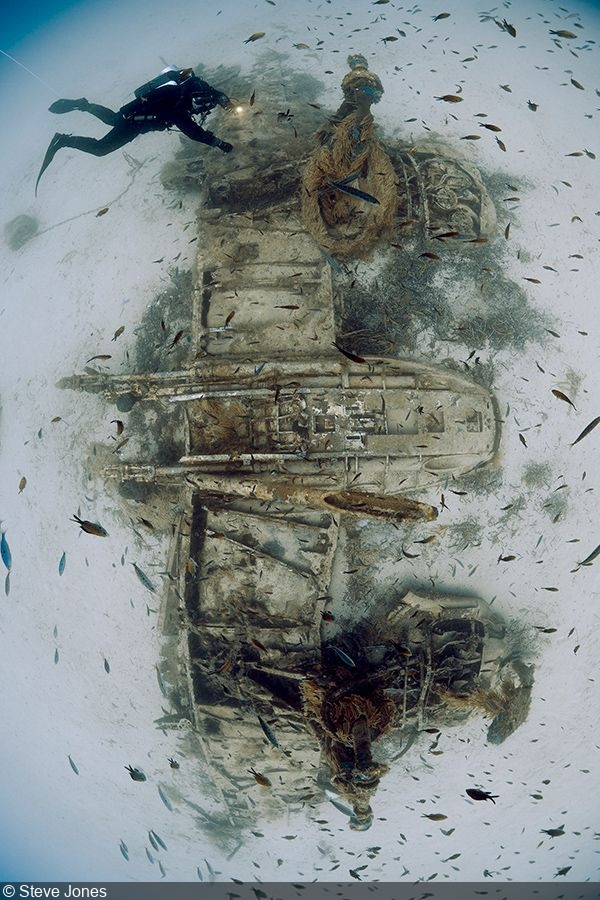 …this top-down view of the same wreck became an award-winning image in Underwater Photographer of the Year. Same wreck, same dive, different angles!

For more inspiring wreck images, visit Steve’s website, www.millionfish.com, or check out his Instagram page. Steve has also been a featured Photographer of the Week on DPG.