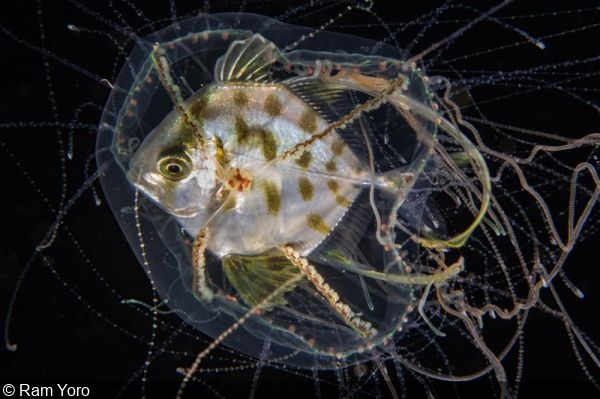 Black-water photography is the hottest trend in underwater photography today. Browse any underwater photo website or social media group, and you’ll find that images of tiny plankton on a black background dominate. From juvenile fish riding jellyfish to paper nautilus to larval wunderpus, these creatures have never been more popular. Despite this massive trend towards black-water photography, what you don’t see much of is blackwater videography. The still images are amazing, but videos will blow viewers away.

Want to stand out from the crowd and try something different? Set up your rig to shoot video on your next black-water dive. The chances are that you already have the setup you need to shoot great videos; you’ll just need to put a little more thought into the process. If you want to shoot only video then go ahead and pull those strobes off—won’t be needing those. On the other hand, it is possible to shoot both on a single dive. Replace your single clamp that connects your strobe with a three-way clamp, then add a video light next to your strobe. A great setup is to have a strobe and video light paired on each arm—you’ll probably want a float too, as this setup is heavy—and a single video light mounted in the middle on a cold shoe mount or crossbar.

With this setup in mind, follow these easy tips to shoot amazing footage in the dark!

You are going to need to crank up your ISO; there is no way around this. Newer cameras have excellent noise reduction, so this isn’t a big deal. Play with your camera and see where your personal preference is. A good place to start is around ISO 1600, which is the highest that older cameras can go. Some cameras you can push up to ISO 3200 and still have acceptable noise levels, while other excellent video cameras (Panasonic Lumix GH5, we are looking at you) shoot smashing footage, but their performance in darkness is hampered by noise. The nice thing about finding out about your ISO is that this is independent of the other settings. Noise is noise no matter what the shutter speed or aperture is, so you can perform this step first without worrying about messing it up later.

Black-water pictures are deceptive. Everything looks like it moves slowly and dramatically, but if you’ve never done it before, you are in for a rude shock. The subjects you’ll be shooting are usually moving incredibly fast and erratically. This is what makes black-water shooting so challenging. Getting your subject framed, in focus, and in the correct orientation is a hugely frustrating challenge. If you listen carefully on black-water dives, you can often hear shooters swearing through their regulators as they madly try and get a shot off!

Video would seem to make this process easier. Push the trigger and let the footage roll, right? Wrong. Shooting black-water video at normal viewing speeds as you try and chase down a subject will make your viewers sick. Making viewers seasick is not a good way to get people to admire your work! To fix this, you need to slow down your clips in post. We will get to this below, but before you dive, you need to get your speed settings right.

If you shoot at 24fps, you can’t slow down footage; it will just be choppy. Think of 24fps as your minimum frame rate. If you set your frame rate to 60fps (which most cameras can do), you can then slow it down 60/24 or 40% of normal speed. This may sound like a lot, but critters will still be moving around fast at 40%. Crank up your frame rate as much as you can—then set your shutter speed to double that. For example, if you shoot 60fps, set your shutter to 1/120s. If you shoot 120fps, set it to 1/240s. The double shutter speed rule is not set in stone, but by doing this, you will get a cinematic look to your footage. Our eyes are used to the motion blur at that ratio, as that is what is used in cinema and TV production.

Here are some examples of things to do and not to do! Experiment and find what works for you

If you are shooting at 1/120s or 1/240s, you are going to want some serious lights. Don’t expect to get enough power out of a single 4,000-lumen focus light. You want three lights: two on the arms with the most power and a single focus in the middle to minimize annoying center shadows. You can make things work with less powerful lights if you can shoot a high ISO and/or you don’t mind violating the 2:1 ratio described above.

To maximize your lights, bring them in close. Look through your viewfinder and slowly pull your lights in towards the center, each one angled out slightly to minimize backscatter. Stop bringing them in when you see a glow on the sides of your frame. The goal is to have the beams intersect right where your focal point is, just like still photos. If you want to point them straight ahead, that works too, just be aware that backscatter in video looks like star trails—and is responsible for making viewers sick. If you have a clean subject on a black background, you can move the camera all over to keep it framed well, but if there is a lot of backscatter visible while you are moving, you’d better get a puke bucket!

With your lights set, frame rate and shutter speed locked in, and your maximum ISO dialed in, now is the time to set your aperture. Do all these steps in order as they build upon each other. In stills, the aperture is often the first or second thing you set, but in black-water video, you’ll want to set it last. The reason for this is that you want to get that number as high as possible to maximize your focal range. Chances are you will be shooting a 60mm or 100mm macro lens, and on top of that, you’ll probably have a super-macro diopter of some kind to boost your magnification. All this magnification means that you are going to have a very small focal range where your subject is nice and sharp.

The nice thing about video is that you can shoot a long clip and cut the fuzzy parts out in post. However, don’t underestimate the challenge of getting a sharp shot. With your camera set up, find a test subject and start with your largest aperture, usually around f/2.8. Now stop down and watch the light levels on your test subject. A histogram is excellent for this if you have one in your viewfinder or LCD. Keep stopping down until your subject is too dark. The larger your f-number, the more of the subject will be in focus. You can even push it one step towards the dark side as you can adjust that in post without too much loss of quality.

Go out and shoot a bunch of critters and have a blast! Enjoy it because shooting is the fun part of video; the editing can be a chore. Keep in mind that if you shoot a 30-second clip at 120fps and then slow it down to 24fps in post, you will have 150 seconds of video. Be selective in your shots and don’t just let the camera run the whole time; you’ll never get around to editing it. We learned this the hard way shooting super slo-mo for an entire one-hour dive. We had to watch nine hours of footage to get two minutes of good stuff!

Now, let’s assume you were good about your shots, and now you are ready to go into post. Even if you don’t want to get into serious video post-production, you can still do two simple things to make decent videos. The first is obvious: Cut out all the subpar footage! This will probably be about 95% of what you shot, but don’t feel bad about that: People have short attention spans. At this point, you might have a dozen four-second clips where your subject is framed, sharp, and well lit. This doesn’t sound like enough for a short video sequence, but it is. You need to take those short clips and slow them down to 24fps. Now that 48 seconds of footage becomes five minutes in slow motion. Score!

A sample of experimental “blowtorch”-style footage shot at 180fps. Think how fast this was in real time!

Shooting black-water video is not technically demanding; it just requires patience and luck. On your next dive, give it a try and you’ll find yourself immersed in a whole new medium. Your footage is sure to stand out!

This article was a collaboration between a bunch of great shooters. A huge thanks to Ram Yoro, Jonathan Venn, and Scott “Gutsy” Tuason. We shot these clips a few years back while trying to figure all this out.