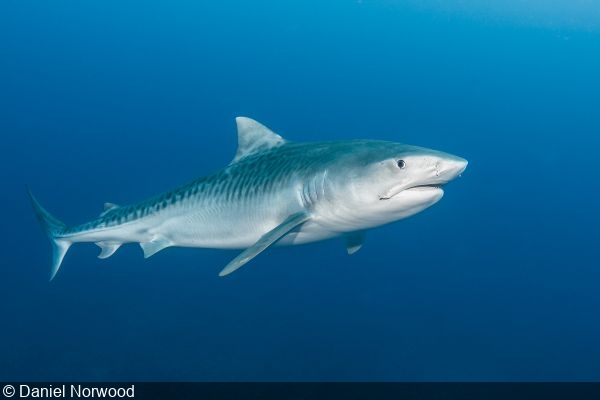 Following on from our recent feature highlighting the world’s best shark dives (Part I, Part II), we now take a closer look at the stars of the show and provide practical advice about how to dive with and photograph the 10 most iconic shark species.

The first shark on our list is the easily recognizable but often misunderstood tiger shark, Galeocerdo cuvier. Although this apex marine predator is considered one of the most dangerous of all sharks, many scuba divers actively seek out encounters with this species all over the world, and they are a favorite subject of underwater photographers and videographers for obvious reasons.

The tiger shark takes its name from the vertical stripes that run along the sides of its body. They are born with a distinctive and prominent spotted pattern that eventually develops into dark stripes and then fades as the individual reaches maturity and a full-grown size of up to 15 feet in length and weighing well over 1000 pounds. This shading serves as camouflage to help protect juveniles until they are mature and safe from potential predators. 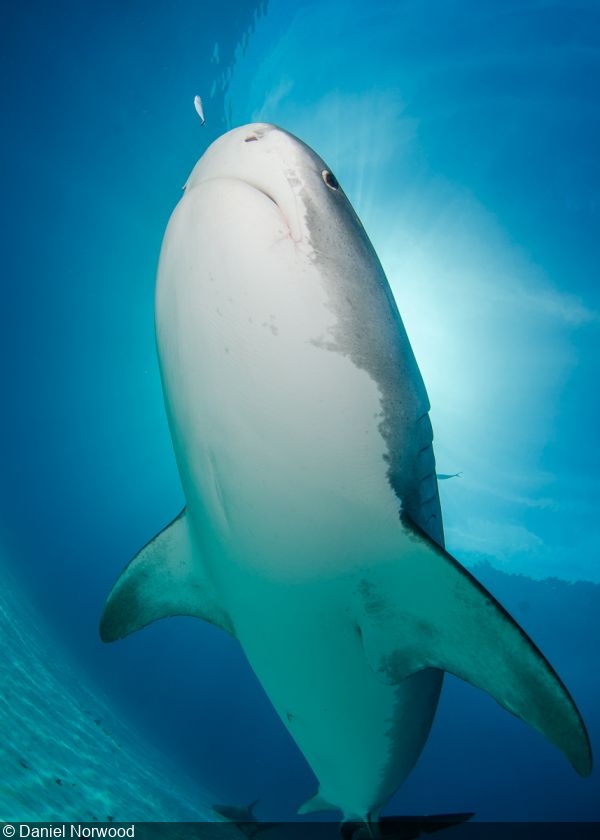 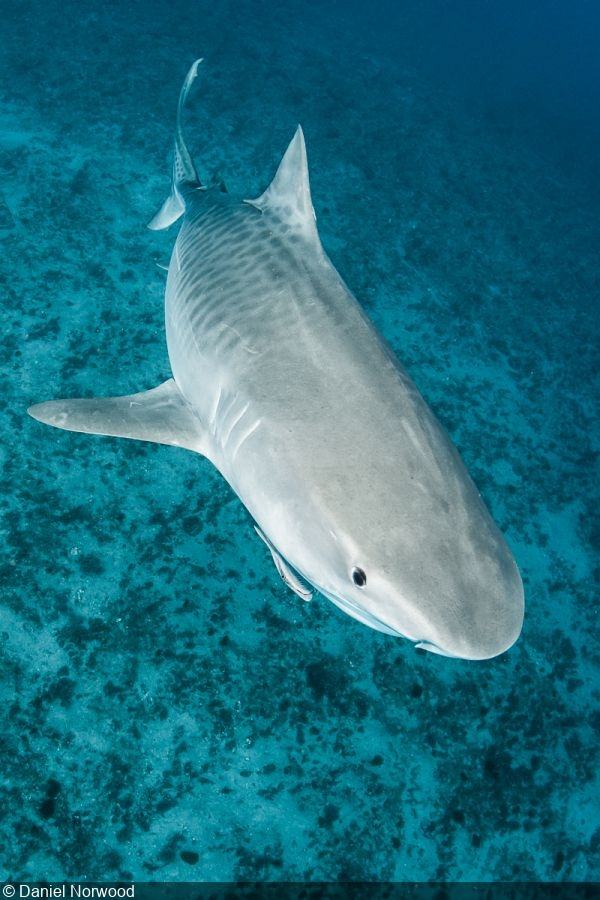 Another feature of the species that is different from other sharks is its wide, almost square, head and very blunt snout. The jaws contain distinctively shaped teeth perfectly designed to cut through tough substances including turtle shells, one of their favorite prey items.

They are a relatively common and wide-ranging coastal pelagic species with a high tolerance for different marine habitats and a worldwide distribution in tropical and warm temperate seas. They have a diverse diet and are known to consume a variety of different marine life including bony fish, birds, turtles and other sharks and rays. Their willingness to eat almost nothing means they often consume waste of human origin, earning them an unenviable reputation as the garbage cans of the sea. Some items found inside dead tiger sharks include metal cans, car number plates, plastic bottles and human clothing. One or two curious individuals in popular dive destinations have even been known to swim off with expensive underwater cameras rigs—much to the dismay of professional photographers who sadly never saw their equipment again! 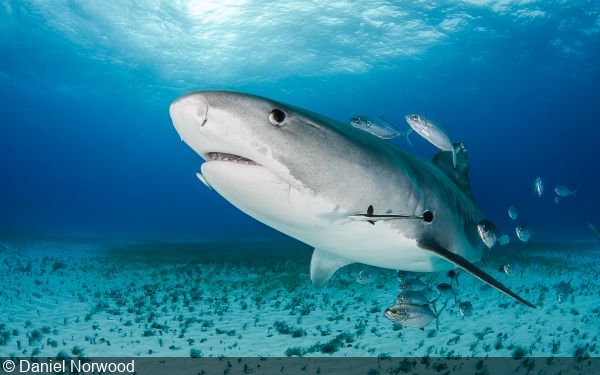 The tiger’s instinct to investigate almost anything also means this species can be attracted with food, and that is how the majority of encounters take place. Although they are big, powerful creatures, tiger sharks are unlikely to approach divers without some kind of incentive, so tourism operators regularly use bait and feed the sharks in order to get customers close to the action and reliably encounter them.

It goes without saying that this activity should only ever be conducted by experts who have experience in the field, and if you want to dive with tiger sharks, be sure to choose a responsible company to dive with who have a good reputation and put safety above all else. 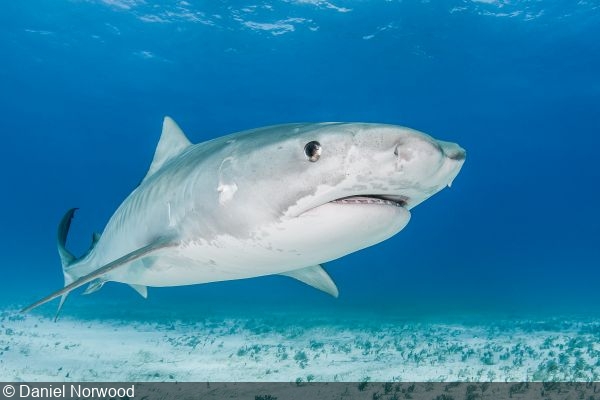 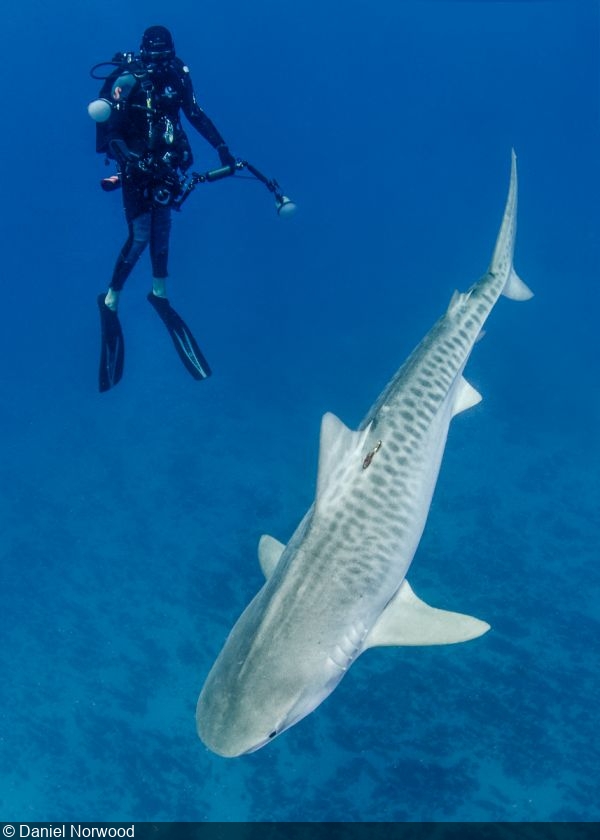 A photographer looks on as a juvenile tiger sharks passes by in Jupiter, Florida, USA

Tiger Beach and Beyond

Although some people don’t like the idea of baited shark dives, it is a fact that the majority of published images of tiger sharks will have been taken under these circumstances, and most of them were probably captured in one famous location in the Bahamas: Tiger Beach.

People have been visiting this shallow sand bank west of Grand Bahama to dive with tiger sharks for years, and it is often the first dedicated shark diving trip that many underwater photographers take part in. There is nowhere else in the world where you can encounter this species so reliably, and it is, unsurprisingly, at the top of most underwater photographers destination bucket lists.

While tiger sharks are migratory species, the same individuals return to the area year after year and are named and well known regulars. One giant female named Emma is probably the most photographed shark in the world, and other famous residents include Hook, Tequila and Butt-Face.

While the Bahamas is definitely your best bet if you want guaranteed sightings, there are many other locations where you can photograph tigers. Some of my favorite images were taken in Jupiter, Florida, another destination well known for shark diving, although the action here is not always as reliable or responsible! Regular sightings also occur in Western Australia, Fiji, Cocos Island in Costa Rica, and Socorro Island in Mexico. 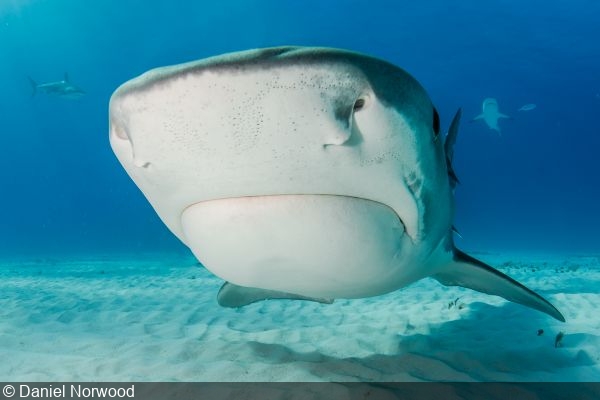 Wherever you are lucky enough to encounter this awesome animal, the photography techniques and diving practices required to come away with great images are more or less the same. The sharks are huge and often come close so focus issues should never be a problem. Like all wide-angle photography, start with an aperture setting of f/8 and a shutter speed of 1/125s second and adjust accordingly depending on available light and depth.

Perhaps the most surprising thing when you first dive with tigers is that they move slowly even when attracted with food. This makes capturing images of the sharks relatively easy in good conditions, so focus on nailing the correct settings and looking for interesting compositions and angles. 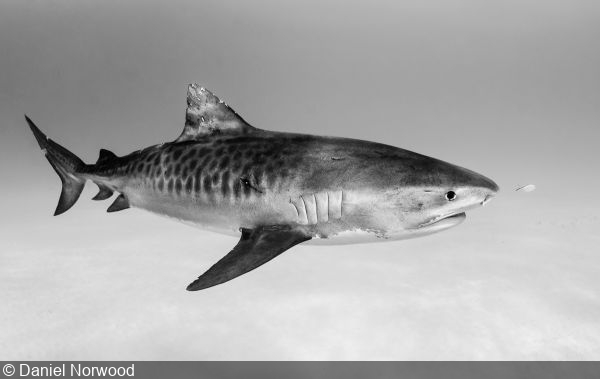 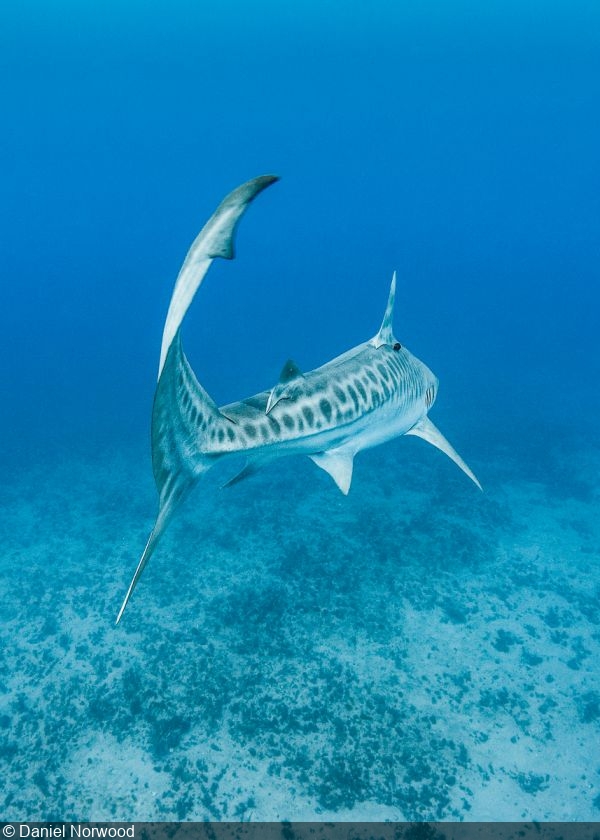 It is only natural to be excited at first and to not pay attention to what you are doing and just fire away. Try to avoid this from happening and focus on the peak of the action instead, especially on a multi-day dive trip to Tiger Beach when you have time to experiment with different techniques. Remember that the sharks here have been photographed from every angle thousands of times before, so try to come up with something different that will separate your images from the rest.

The biggest challenge on baited dives is to get away from the crowd and isolate the sharks without the distraction of other divers in your frame. If open-mouthed shots of the sharks feeding are what you are after then by all means get as close to the bait box and feeder as possible and snap away with high shutter speeds to catch the action. Personally, I prefer to capture the shark without all the mess, so I will try to position myself at the edge of the group and shoot away into open water whenever possible.

As you will be shooting a constantly moving subject, a wide-angle zoom lens is the perfect tool for the job. The Tokina 10–17mm Fisheye, or something similar, will allow you to capture a variety of different images all on the same dive. Strobes are also essential, ideally two powerful units built for wide-angle photography that will throw enough light on the subject to highlight its features even from far away. 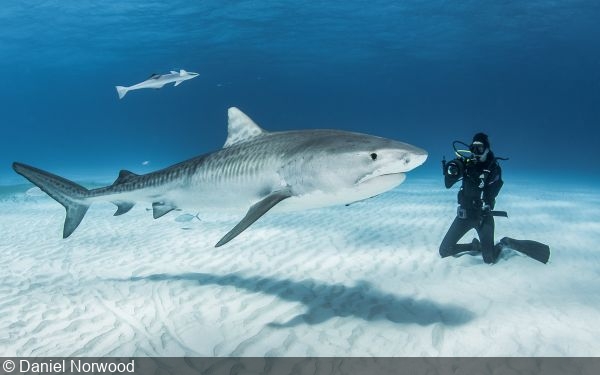 Don’t be too intimated or concerned if a tiger shark heads straight for you. This is part of their natural behavior and is nothing to be concerned about providing you behave correctly. Remain calm and use your camera as a barrier between you and the animal. Most of the time they will turn away at the last minute, but worst case scenario, you have something between you and the shark that provides protection should you need it. Under no circumstances use your hands to push the sharks away or attempt to grab them, flip them over or any other stupidity you may have seen on social media. Show the sharks the respect they deserve and follow the rules and you have nothing to worry about.

If you happen to have an encounter with a tiger shark you were not expecting, remember to remain calm and do not chase the animal in an attempt to get closer to take a photo. Chances are you will scare off the shark and upset the rest of the group if you do, or worse, antagonize the animal and put yourself and others in a potentially dangerous situation. If you are lucky and the shark approaches you, this just might be the best chance you have a capturing a great photo of this beautiful species in blue water that is a little bit different from the rest!

Finally, don’t take part in the dive if you are a beginner or not comfortable around big sharks. Even the most experienced divers must always remember the number one rule when diving with this species: Never take your eye off the tiger! 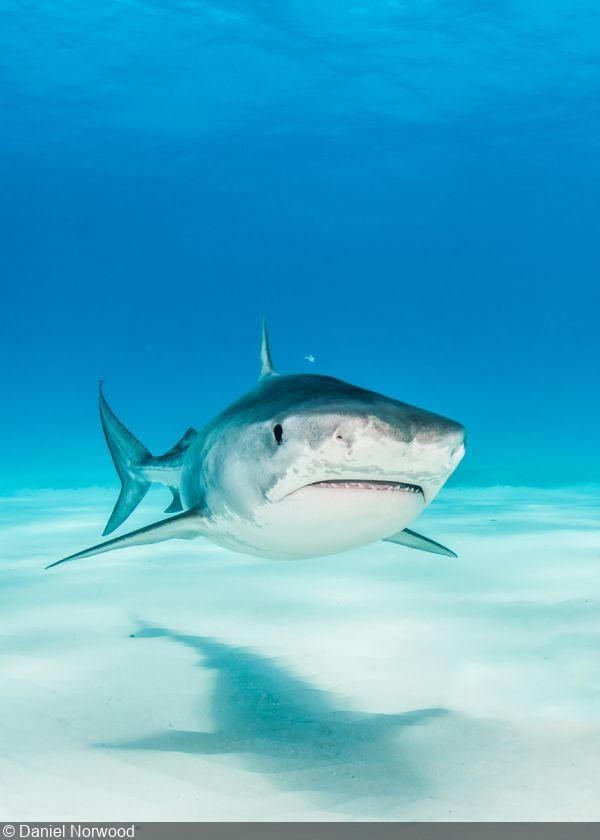 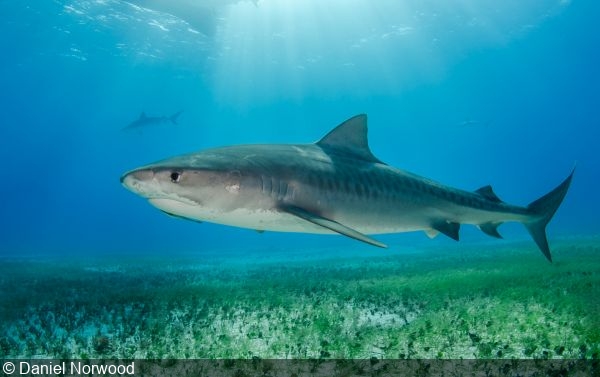 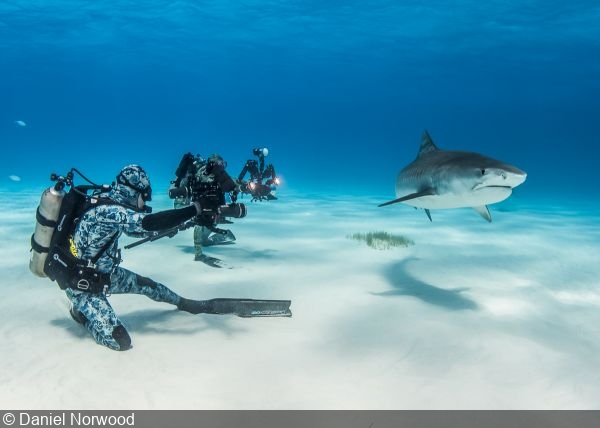 Divers line up to film a special shark supermodel at Tiger Beach, Bahamas 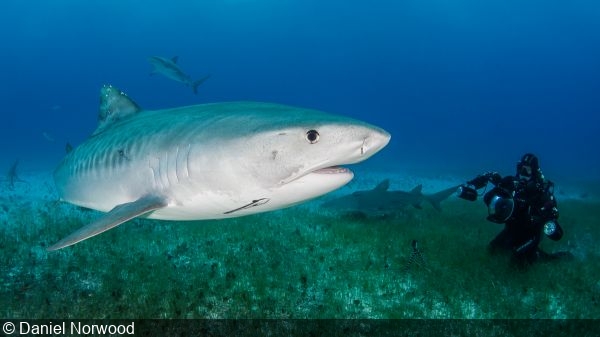