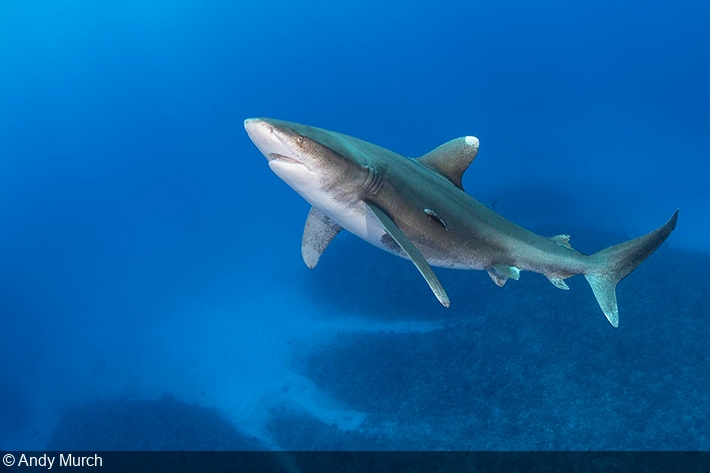 Oceanic whitetip sharks are an exciting and curious photography subect

Sadly, oceanic whitetips have been hunted almost to extinction in much of their range. In the 1980s, one study estimated that the oceanic whitetip population in the Gulf of Mexico had been reduced by 98%—a shocking revelation that eventually led to the species being protected under CITES. Unfortunately, rampant overfishing continues in many areas, so if you are lucky enough to encounter this unicorn of the shark world, have your camera ready! 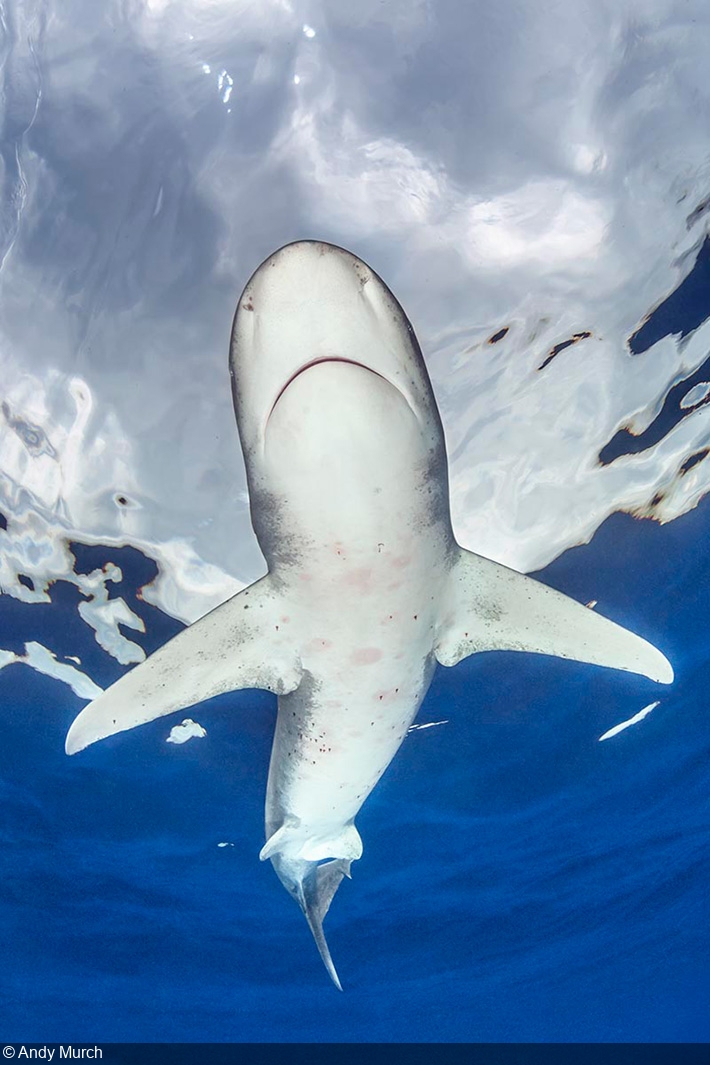 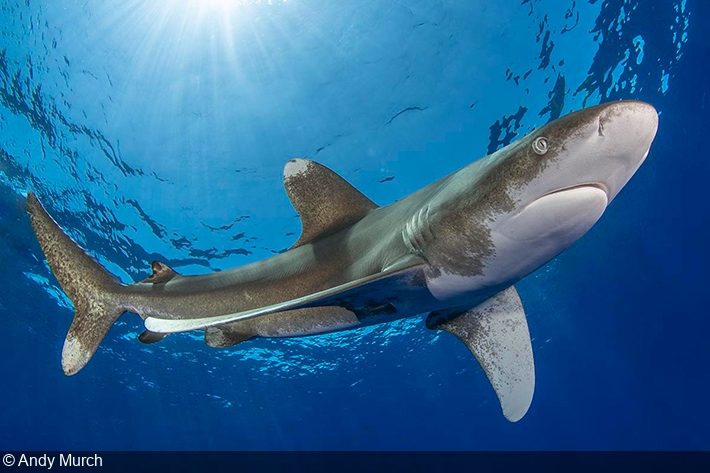 Where to Find Oceanic Whitetip Sharks

Oceanic whitetips are members of the family Carcharhinidae, commonly called requiem sharks or whaler sharks. Most Carcharhinids are found on or around reefs but as their name suggests, oceanics are denizens of the deep ocean, wanderers that patrol the marine desert far from major land masses.

Consequently, divers are unlikely to run into one cruising over a reef, but there are a few spots (always near deep water) where oceanic whitetips regularly make an appearance. Oceanics can be seen at Brothers Reef in the Red Sea, but sightings are far from guaranteed. After a recent attack, the Egyptian authorities banned baiting for sharks, but the sharks have long memories, so for now, they continue to hang around the seamount. If you are keen to see one but don’t necessarily want to get close enough for an image, this may be your best option. 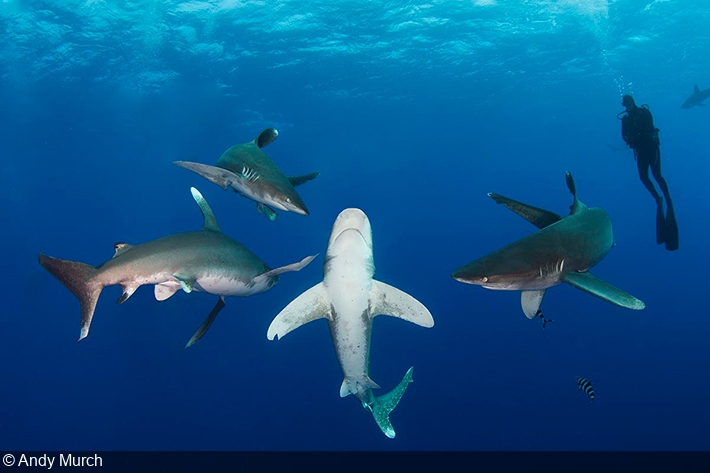 If your mission is to capture high-quality portraits of oceanic whitetip sharks, unquestionably, the best place in the world to do so is Cat Island in the outer Bahamas. During April and May, considerable numbers of oceanic whitetips congregate around the island. Again, you’re very unlikely to see one while reef diving, but it is possible to join a dedicated offshore shark trip that baits for oceanics where encounters are a slam dunk.

Cat Island is a hotspot for oceanics because it is surrounded by extremely deep ocean trenches, making it possible to chum in 3,000-feet-deep water, just a few hundred yards from shore. Unlike in the Red Sea, the oceanic dives at Cat Island attract lots of sharks—between five and 20 individuals is the norm. And because food is scarce in the deep marine desert, once the sharks arrive, they tend to hang around all day, unless the boat drifts inshore into water that is too shallow for them to feel comfortable. 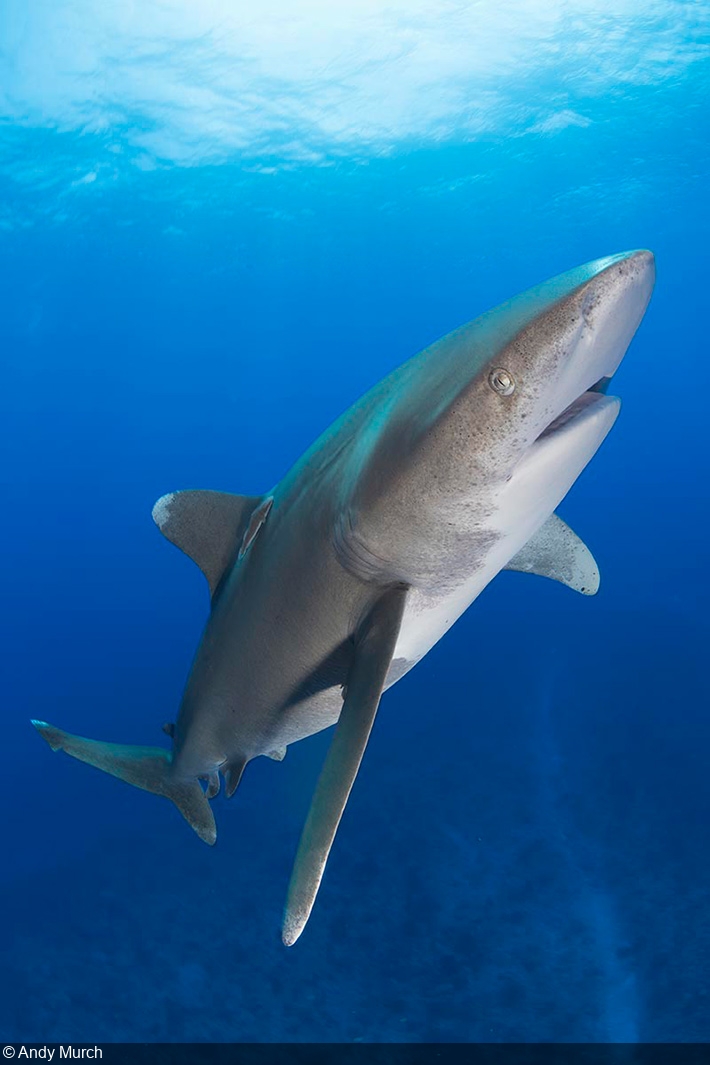 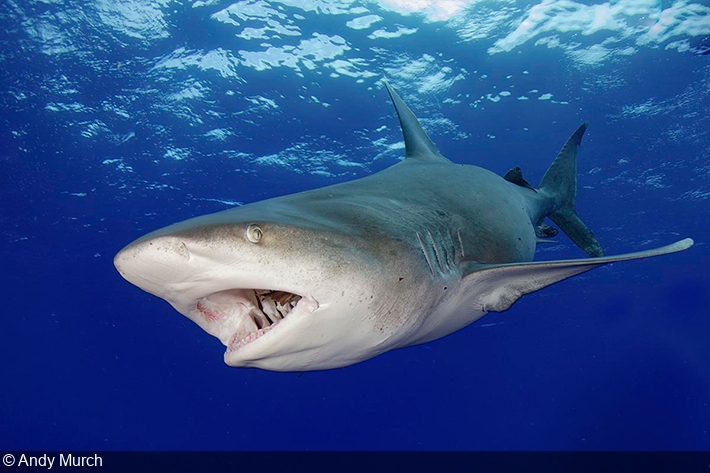 If you are shooting near the surface in clear blue water under sunny skies, you can afford to shoot with a low ISO for virtually grain-free shots. Oceanics move relatively slowly unless they are agitated, so you can also shoot with a moderate shutter speed, although it may be more effective to shoot with faster settings so that you can open up your aperture for maximum strobe effectiveness.

You may be tempted to shoot with natural light. This is definitely an option, but even at 30 feet, the golden skin of an oceanic whitetip shark will look unnaturally green. Even with strobes, you’ll find that it is difficult to bring out an oceanic’s bronzy sheen because their skin is not as reflective as other requiem sharks. 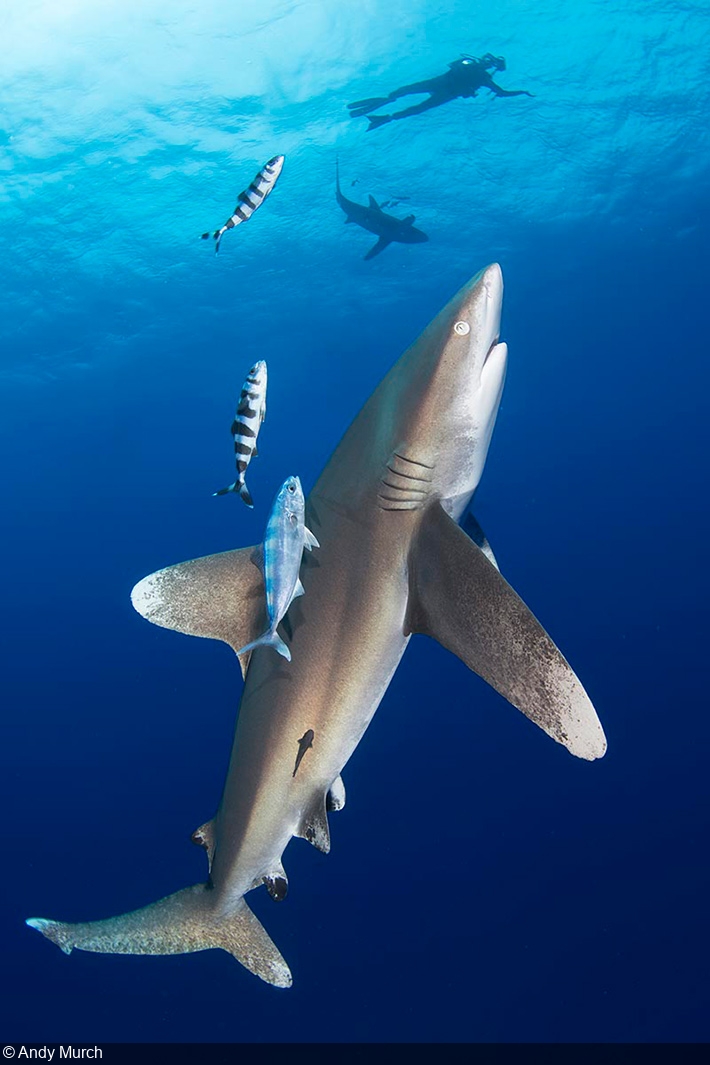 Cranking up your strobes more than normal will mitigate this problem, but those beautiful white-tipped fins will be completely blown out. It’s a tricky balancing act. Experimenting with strobe positioning may help. Try to keep your strobes high so that they’re angled down at the shark’s back and further from their long pectoral tips. Warm diffusers will also help bring out the shark’s true color at lower power settings. If you find that this also adds a yellow cast on their fin tips, you have the option to correct this in post. 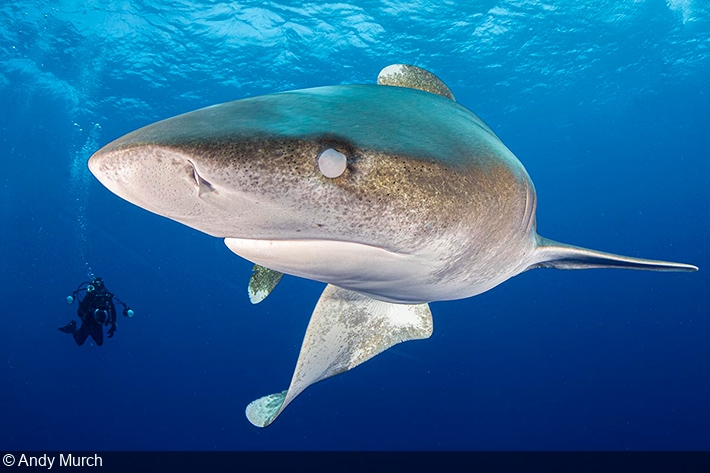 Due to their bold nature, it is quite easy to get frame-filling portraits, but even when shooting tight compositions, try to compose (or crop) so that the shark’s tail is slightly closer to the edge of the frame than its head, because this always looks more appealing. If you are fortunate enough to have multiple sharks to choose from, look for sharks that have pilot fish or other escorts that add an interesting behavioral aspect to your images. 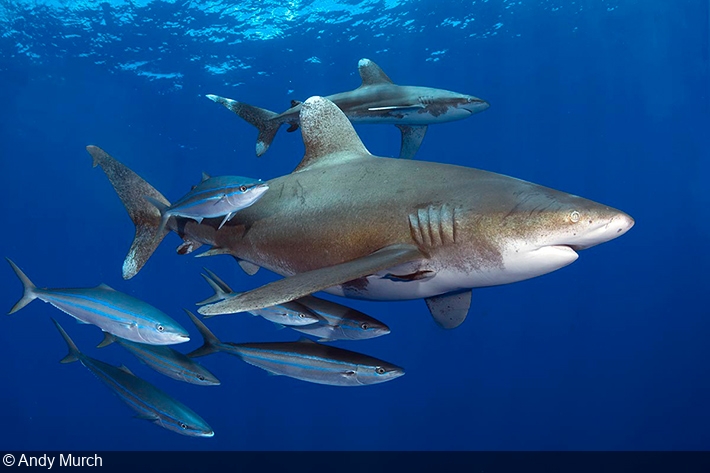 Two sharks are escorted by a group of rainbow runners, making for an interesting behavior shot

When shooting further away, look for sun rays piercing through the water to make the negative space around the shark more interesting, or try to position divers or other sharks in the background. On the rare occasions where there is a reef visible, see if you can incorporate it into your images. Chances are, the sharks won’t want to swim between the coral heads, but the reef will make a nice backdrop in the distance. Shooting over-unders can also be a fun challenge, best attempted from the safety of the swim step! 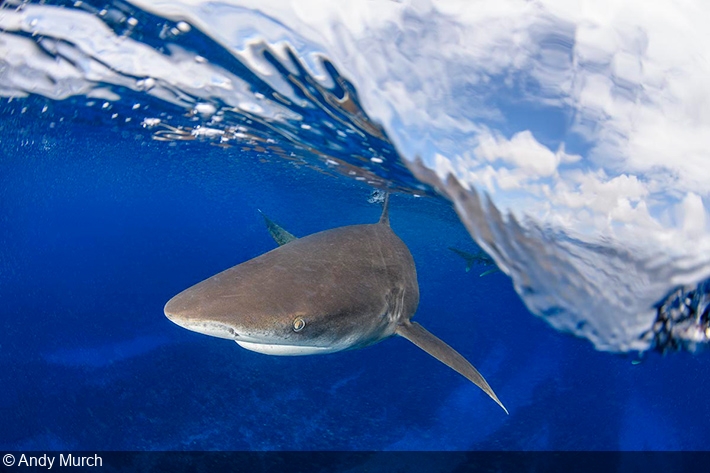 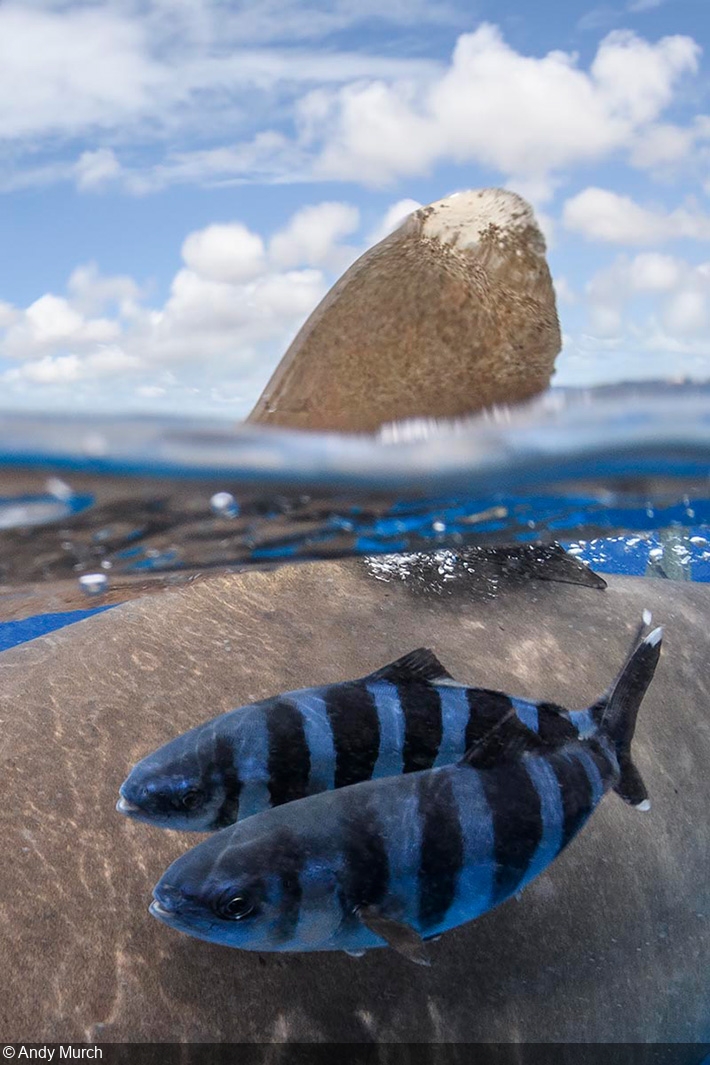 Oceanic whitetip sharks have been implicated in numerous attacks. They are clearly an excitable species (roughly on par with bull sharks) but they are not as prone to aggression as they are often made out to be. The most damning stories arose after the sinking of the USS Indianapolis near the Philippines during WWII. Of the 900 sailors that went into the water, more than 500 perished while waiting to be rescued. The popular press blamed oceanic whitetips, but most firsthand accounts agree that the majority of sailors died from their wounds, whereupon their bodies were carried away by sharks, rather than the sharks causing the fatalities. 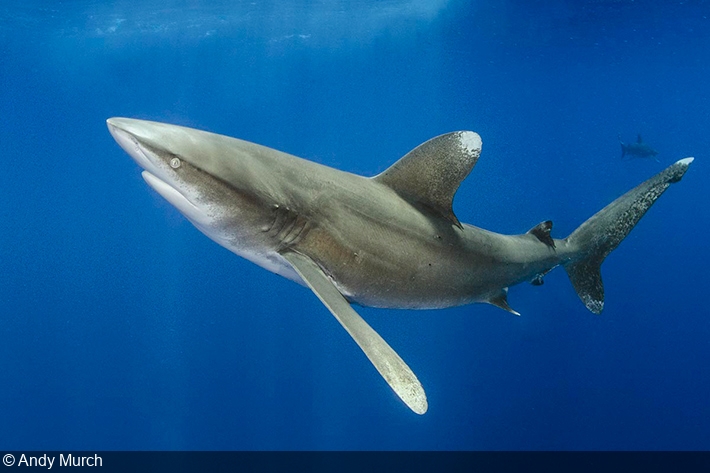 When conducted by experienced professional shark feeders, baited oceanic dives can be as safe as any other shark feeds, but even then, participants need to remember a few key points. This is especially true for photographers: 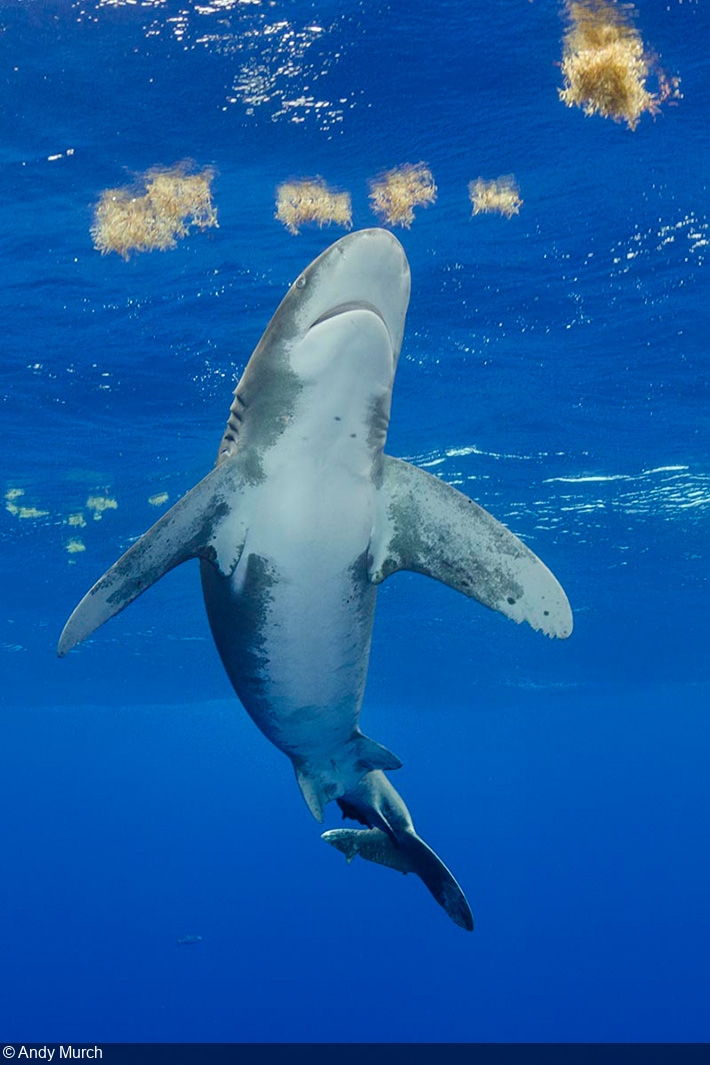 Oceanics will investigate anything at the surface so bear that in mind when diving with them!

Even though divers need to be cautious when diving with oceanic whitetip sharks, with their exaggerated pectoral fins, sleek lines, and mottled counter-shading, they are undoubtedly one of the most photogenic and rewarding sharks to shoot—a species well worth venturing away from the familiarity of the reef for. 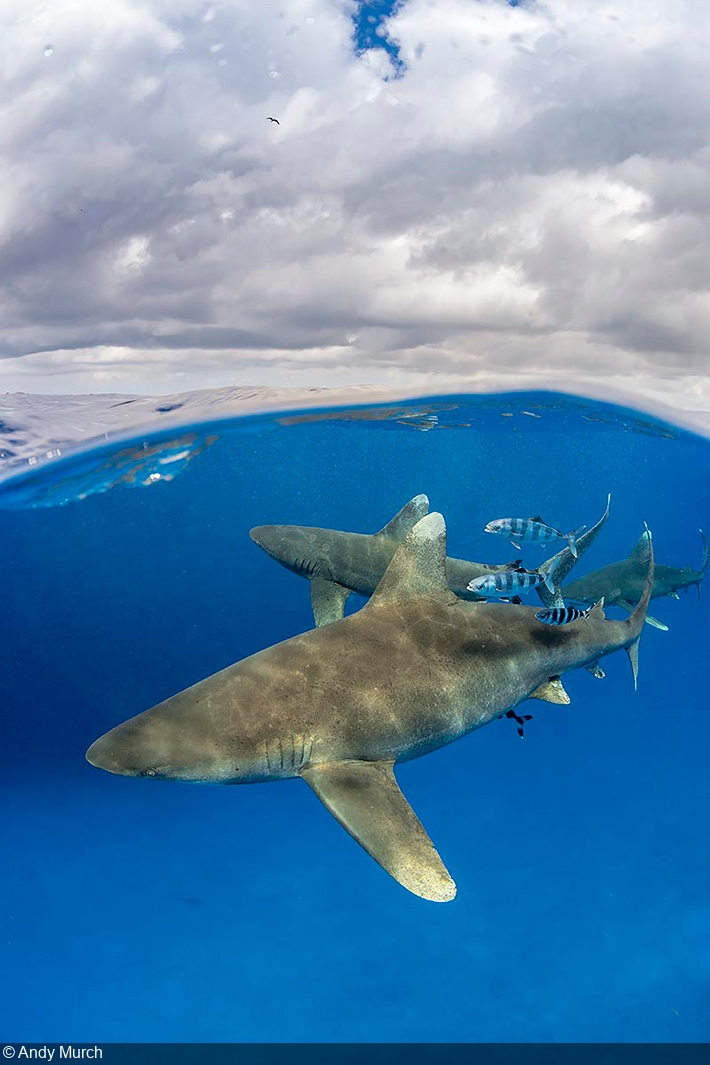 A well-executed split shot shows sharks at the surface, where they roam the pelagic zone looking for food 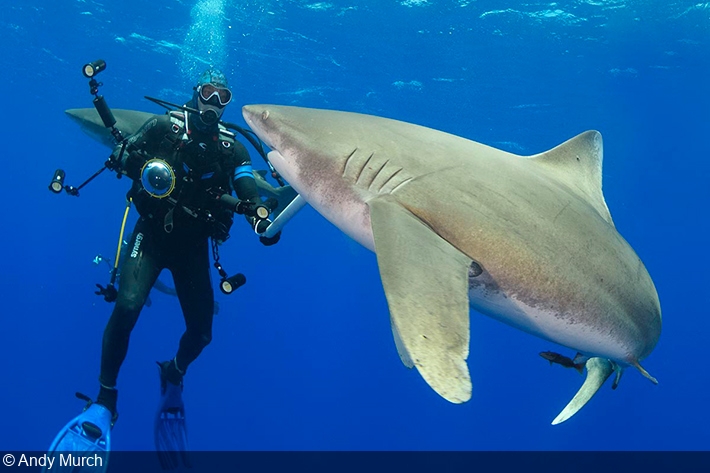 Photographers are able to get extremely close to oceanic whitetips on baited dives, allowing for amazing photo opportunites that require wide-angle lenses and some experience diving with sharks