The wreck of the USS Liberty is the perfect playground for the underwater photographer. The wreck has become a haven for a vast diversity of marine life in the 40 years since being submerged.

The Liberty lies in the pitch-black sands off the shore of the small village of Tulamben in the northeast of Bali. Only a 4-hour scenic drive from Bali’s international airport, the wreck is not a highlight for any diver visiting this “Island of the Gods,” but one of the most dived sites in the world. 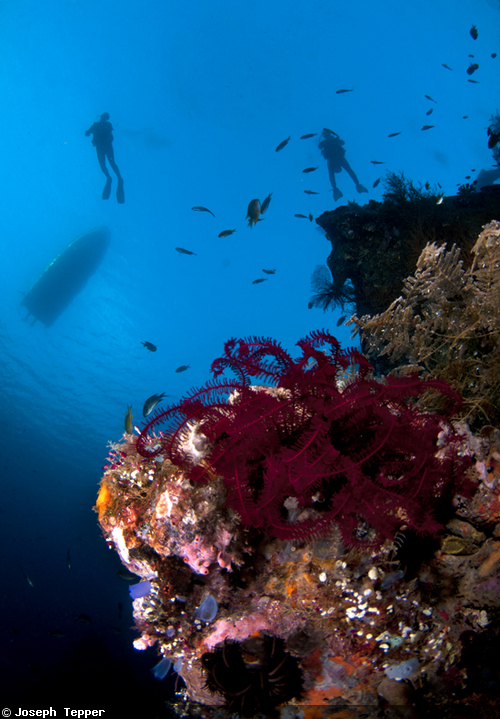 Any serious photographer or videographer hoping to return with portfolio of shots demonstrating the diversity in subjects on the wreck should stay in the village for at least a few days. There are numerous resorts in the area, all within close proximity to the Liberty and the other quality muck dive sites that have made Tulamben the heart of Bali diving.

The biggest advantage of staying in the area is that you can dive the site in the early morning before the scores of daytrippers arrive from the south. By around 8 AM the wreck is crawling with pesky tourists, not ideal conditions for photography. Instead, wake up shortly before first light so you can be in the water by sunrise to exchange tourists with scores of bumphead parrotfish.

Wide-Angle Photography on the Liberty

Early morning on the Liberty Wreck is the best time to reliably encounter larger subjects, making it easy to choose your wide-angle setup. The action will be almost instant once entering the water, so be sure to have strobes on and ready to go. Shooting during dusk can be different than a typical daylight dive. Remember to increase your ISO due to the lower light levels at this time and to pay close attention to exposure settings to properly expose the water column in the early morning.

The first subjects you are likely to see is the huge resident school of jacks. Hundreds of these fish cruise in the shallows and it is fascinating to watch a number of giant trevally hunting the group. If you are lucky you may capture the school in a huge spiral form. 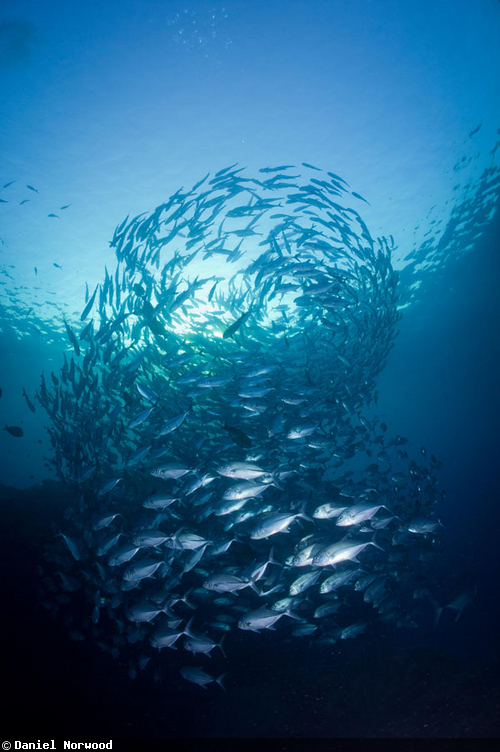 The big reward for getting up so early is the chance to see the group of bumphead parrotfish that sleep here each night. At around 6 AM, they leave to feed for the day and will usually stay around the wreck for 30 minutes or so for their morning cup of tea. 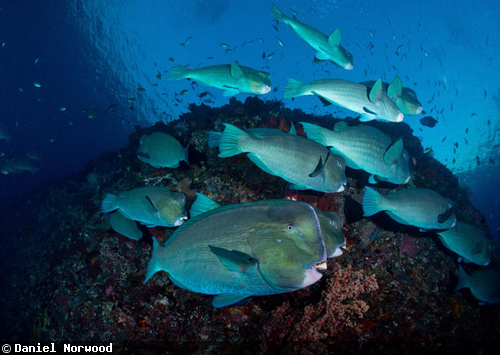 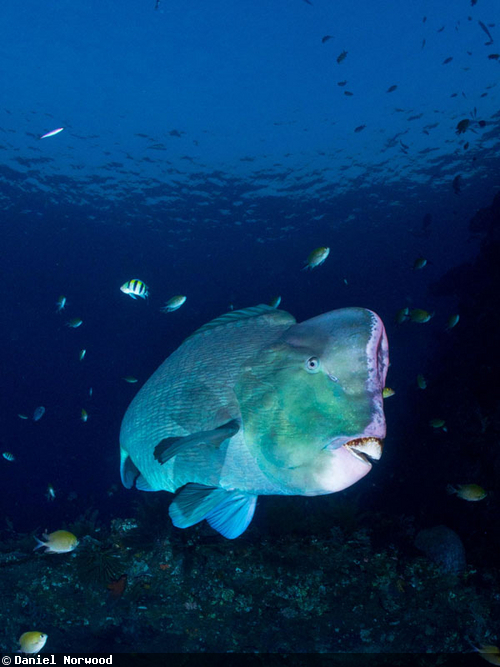 The next subject for the fisheye lens is George the resident great barracuda. Possibly the most photographed fish in Indonesia, George is certainly not camera shy and will allow the careful diver to approach within inches of the dome port to get shots of his impressive teeth. 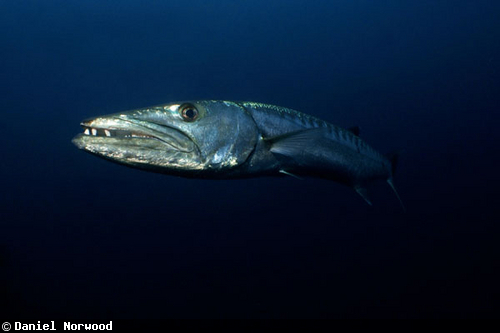 It is then time to concentrate on the ship itself! The wreck is encrusted with many soft corals, sea fans and sponges that make for amazing colorful scenic images. When combined with the hundreds of reef fish that call the Liberty home it is possible to complete many dives experimenting with lighting and composition. It is also worth occasionally looking out into the blue as many pelagic species pass by the wreck to feed or get cleaned, including reef sharks, Napoleon wrasse, tuna and even the mighty Mola Mola! 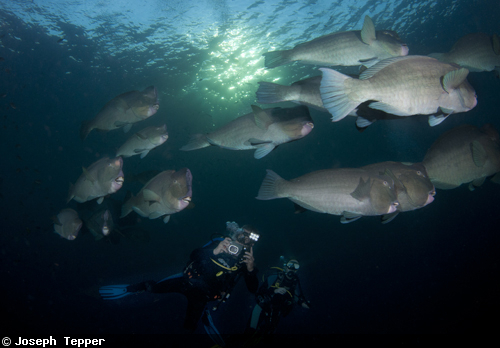 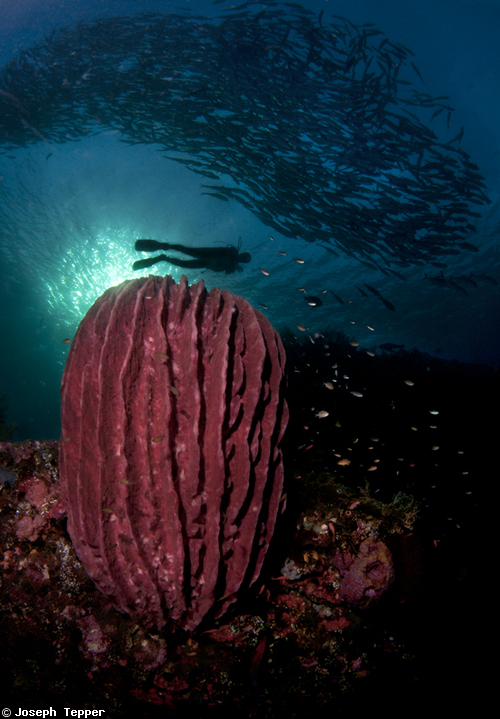 Going Macro on the Liberty Wreck

When staying in Tulamben you might want avoid the wreck after the early morning dive until around 3pm when the hoards of visiting divers have hit the road back to Kuta. Once the masses have left, it is time to set up with a macro lens and look at the dive site from an entirely new perspective. 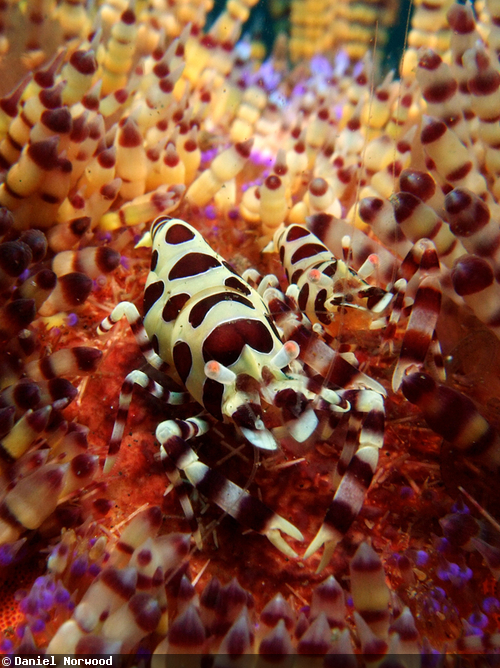 The wreck and its surrounding area are also home to some of the ocean’s most sought after critters, and with the assistance of a good guide it is possible to see nearly everything in an Indo pacific guide book. One of the more difficult species to shoot is a large group of garden eels that reside in the sand slope before reaching the wreck. With patience though it is possible to approach them and with the right lens capture good close-up shots.

Try looking through the crinoids that reside at around 50 feet for groups of ornate ghost pipefish—as many as ten individual specimens. The volcanic black sand also makes for a great background for many varieties of colorful nudibranchs. Hiding on the wreck itself are many scorpionfish, leaf fish, frogfish, crabs and the elusive longnose hawkfish. 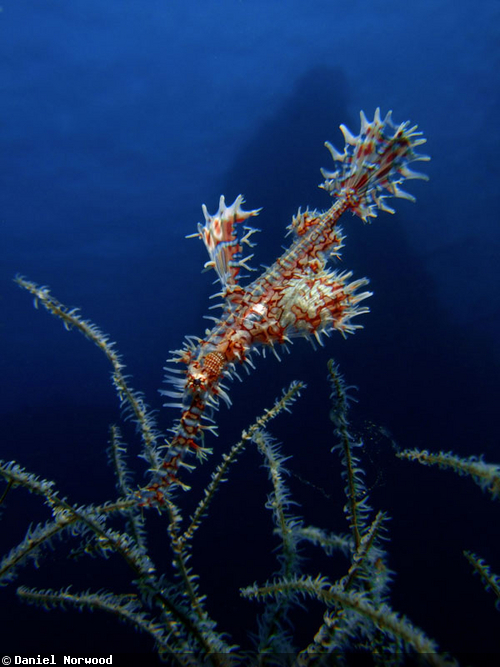 For supermacro images, there are many shrimps and blennies and in gorgonian fans around the wreck, including the famous Pygmy seahorse. These are usually towards the deeper parts of the wreck at around 90 feet, so be careful with your deco time when shooting them.

The wealth of subjects in Tulamben means that there is always something new to shoot and it is possible to spend day after day diving the wreck and the surrounding area. The Liberty Wreck is undoubtedly one of the best and most productive dive sites in Indonesia.

Planning A Trip to the Liberty Wreck

When: Year Round (but arrive early in the day)

Who to dive with: Bali Dive Academy offers trips to the Liberty Wreck and cater to photographers.