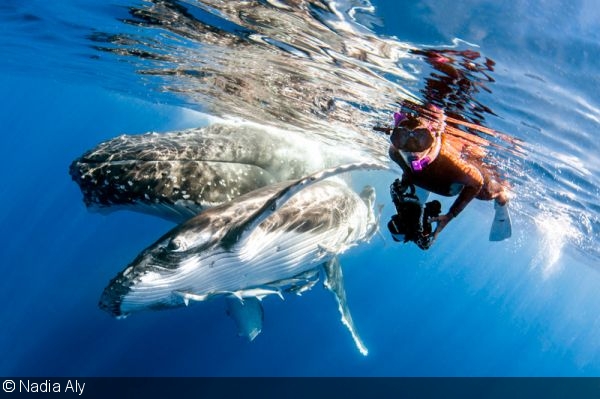 My quest to see humpback whales underwater began in Mexico’s Cabo San Lucas, a spot renowned for its whale-watching tours. But despite some amazing diving off the southern tip of the Baja California peninsula, I soon discovered that this wasn’t a place where you can interact with these behemoths: They are constantly on the move and photographic opportunities are limited.

Some time later, I hopped on a liveaboard to Silver Bank, an area in the Atlantic Ocean north of the Dominican Republic and southeast of the Turks and Caicos Islands. Our cruise involved a week of diving at Silver Bank after a week off Turks and Caicos, looking for whales. The liveaboard was wonderful; the whale encounters, not so much. My longest during the trip was maybe 15 seconds. 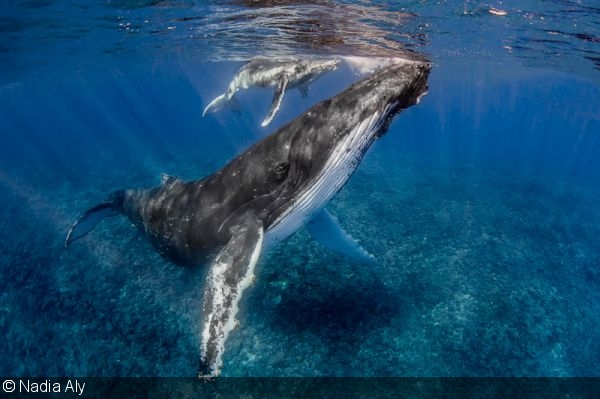 Of course, it’s nature and there was nothing I could do, but overall the destination disappointed me. Although I know it’s a fan favorite for many, Silver Bank was not what I was looking for. The encounters just weren’t close enough or long enough, and keeping up with the whales to get decent images was, quite literally, exhausting.

All this brings me to 2015, when I decided that was it—I was going to spend a month swimming with the whales in Tonga. I had wanted to visit the kingdom for years, but it had just seemed too remote. Now, new flight routes on Fiji Air between LAX and Vava‘u via Nadi meant the total travel time was no longer as daunting as it once was. Little did I realize that the visit would change my life path forever. I fell in love with the whales—love-of-my-life, smitten-like-a-kitten in love. 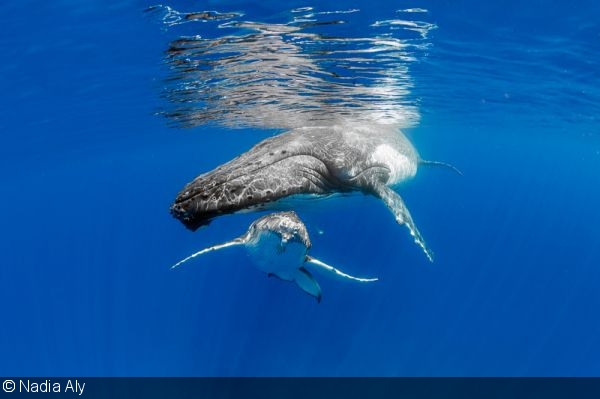 The humpbacks arrive in Tonga after a journey of more than 3,700 miles—one of the planet’s longest animal migrations

Tonga is an archipelago in the South Pacific Ocean. It’s directly south of Samoa and about two-thirds of the way from Hawaii to New Zealand. It has 170-plus islands, only 36 of which are inhabited. The islands are divided into three main groups—Vava‘u, Ha‘apai, and Tongatapu—and cover a 500-mile-long north–south line. The easiest way to get to Vava‘u is via Fiji, although you can also fly to the main island of Tongatapu from New Zealand and Australia and catch a connecting flight from there (the next day).

I could not believe the encounters I had with these awe-inspiring creatures. They were slow-moving, interactive, friendly, playful, and the water was crystal clear. My mind was blown. After having traveled the world to scuba dive full-time for three years at that point, I still describe these special encounters as the most amazing interactions in the ocean.

The popularity of Tonga’s humpback whale swims has increased dramatically over the past few years. Increased social-media awareness has played a huge role in promoting the destination. From Instagram celebrities to underwater photographers, to people who just love whales, Tonga offers an experience that—in my opinion—cannot be matched. 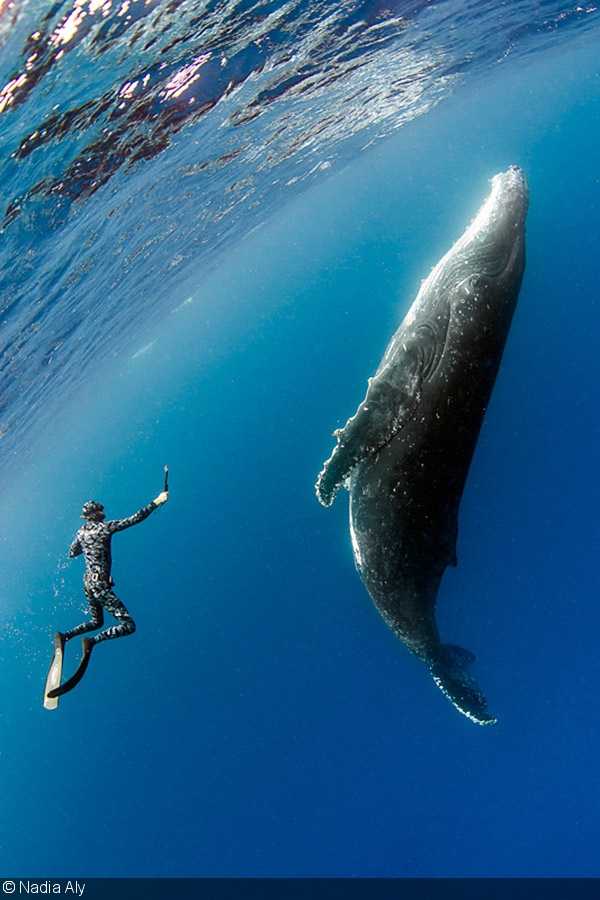 If the whale interactions in Tonga don’t blow your mind, you’re just not swimming fast enough! 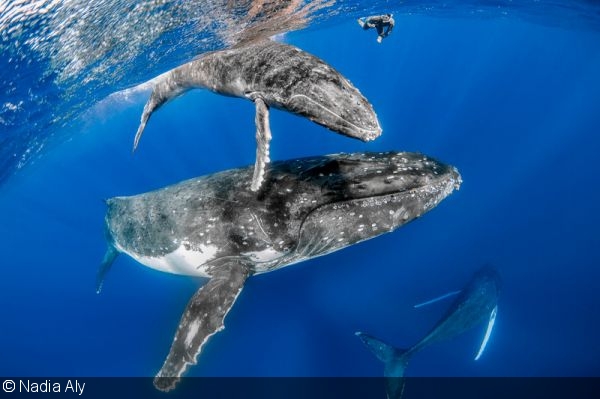 Tonga’s humpback interactions require only a handful of accessories: wetsuit, fins, mask, and snorkel—oh, plus camera

The great thing about these trips is that they are snorkel only, making it perfect for anyone, whether you’re an underwater photographer or just looking for an adventure. Whales are acoustic animals, which means they don’t like the sound of divers’ bubbles, but most importantly, they’re fast, so being on snorkel is the best way to keep up with them.

Tongan waters are the birthing and mating grounds for a certain population of humpback whales, and they arrive specifically for these purposes. Generally, the whales arrive in Vava‘u at the end of June and you can swim with them all the way into November.

The islands of Vava‘u are ideal because the water is extremely clear. There are multiple island groups with bays that provide protection from the wind. This allows you to go out almost every day during whale season—except for Sundays, which is the day of rest in this deeply conservative Christian country. 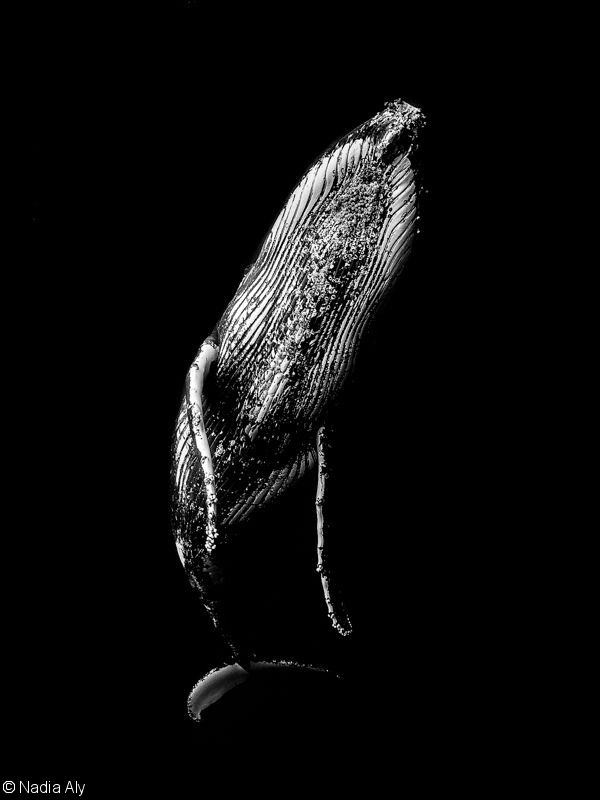 Humpbacks are surely some of the ocean’s most photogenic creatures 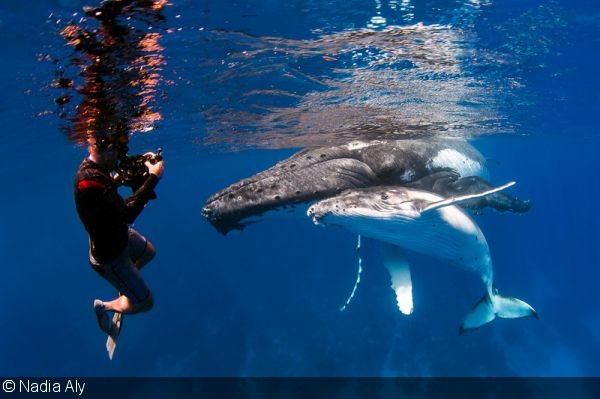 No strobes allowed: All you need is a lean, mean setup equipped with good wide-angle or fisheye glass

A taste of Tonga: What it’s like to swim with humpbacks

Tongan law allows four swimmers in the water at a time with a certified whale guide, so there will never be more than five people in the water with a set of whales. This is not the same in other destinations around the world, such as the Maldives or Mexico, where you can have one or two whale sharks and 45 people in the water.

The way Tonga runs these tours is very respectful to the whales, and trips are very well executed. The crews from all the boats work together and help everyone out, doing the best they can to make sure everyone is having respectful, quality swims with the whales. For me, there is no better place on the planet to interact with these gentle giants. 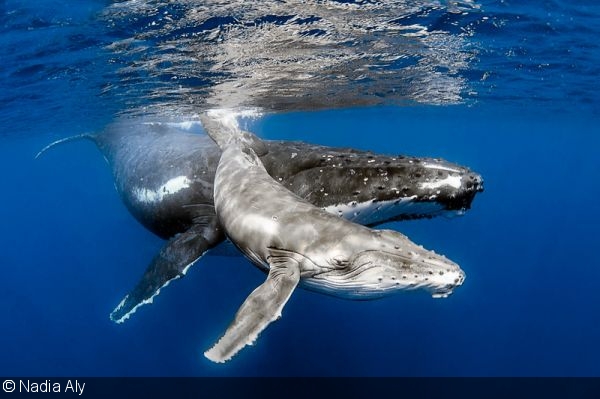 Fancy joining Nadia on a trip? Check out her expeditions on HumpbackSwims.com. Nadia has been featured as a DPG Photographer of the Week.