Editor's Note: This is the second part of Benja Iglesis’ amazing story of his experience photographing  humpback whales in Hawaii. The first part describes an unlikely and unexpected encounter.

In the middle of whale season, we had another great whale encounter near a dive site we call the 85-Foot Pinnacle, located between the south shore of Maui and Molokini Crater. We were coming back to the boat after a dive when I looked back and saw a whale coming our way. I turned around, set the camera and waited. These animals seem to be curious by nature, so I was hopeful. 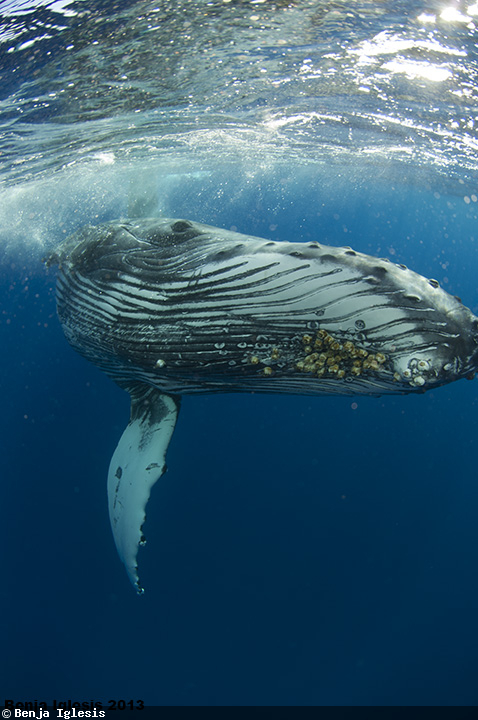 I was about 10 feet from the stern of the boat when the whale decided to get close. When I say “close,” I’m talking less than two feet away. I don’t care who you are or how many times you have done something like this, every time a wild animal bigger than a bus comes close to you, your heart beats far over the normal limit! It’s something really difficult to express in words. I’m not sure there is a word for it, as it is a mixture of scared, peaceful, and honored.

I knew it was just coming by to check me out, but still my heart was pounding. I managed to compose my image and shoot a few frames, while simultaneously taking it all in. Two of my shots came out the way I wanted.

It was another one of those moments that would stay with me for the rest of my life. What are the chances of this happening again in one whale season? 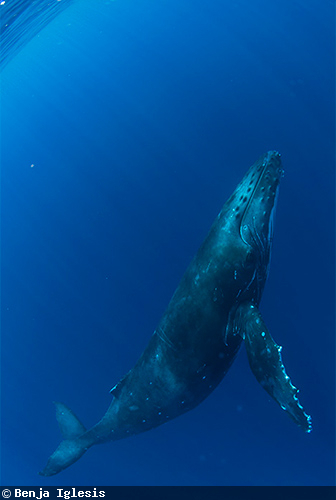 Molokini Crater is a Marine Sanctuary about three miles off of the south coast of Maui. It is a great dive site that I jokingly refer to as “my office,” since I dive there nearly five days a week. At the end of April, I was once again in Molokini. Since it was the end of whale season, most of the whales were gone and we weren’t even able to hear their songs underwater anymore.

We had just moored the boat and I was appreciating how calm the water was when suddenly I could see something moving on the other side of the crater in an area called Enenue. At first I thought it was a whale but soon enough I could see a pod of dolphins—still exciting! I started getting ready as fast as I could in order to get in the water and swim around the Reef’s End dive site to see if I would be lucky enough get the chance to shoot the dolphins underwater. I knew the chances were slim because they where about 300 yards from us and there was no way to tell which way they would go. I jumped in the clear water—with over 150 feet of visibility, turned off the flashes, and set the aperture and speed for my hopeful encounter.

The dolphins were nowhere to be seen. I was in 100 feet of water looking at a small school of raccoon butterflyfish in the mid-reef area, which is toward the center of Molokini. I turned on my strobes and started shooting some images when suddenly I heard the unmistakable high-pitched sound of dolphins! I looked up and then toward the deep blue to seek out the dolphins, and a sight only seen in the movies was right in front of me! I was hovering in 120 feet of water with my back toward the reef and right in front of me were two big whales looking at me.

It appeared they were amused, trying to figure out just what this thing was in all that awkward diving equipment with bubbles and lights and fins, and just what I was doing there. 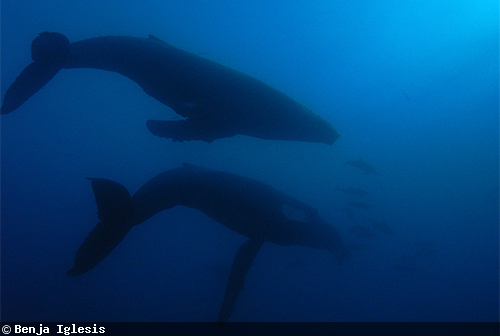 I was awestruck by the whales but then I realized that just above them and in between them, over 40 dolphins were playing around. I just could not believe my luck! I was the only diver underwater in the whole crater having the time of my life with two giant animals and an entire pod of dolphins right in front of me.

After ten minutes of no movement from either them or me, I lost my buoyancy and touched a rock making an annoying sound. They turned toward me. We looked each other in the eyes for a moment and then with the slight move of a fin they turned around. In less than four seconds they were gone. I looked around and it looked like they where never there. There was no trace of them but the image on my mind and pictures in my camera. 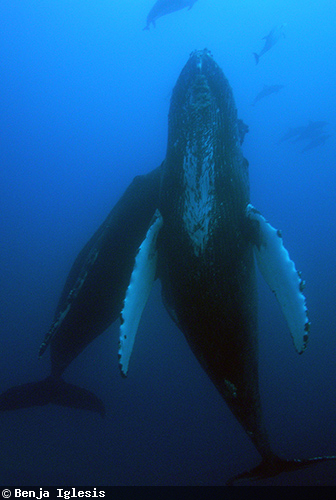 Not once, not twice, but over 14 times this whale season I had been blessed with this kind of moment. By the time I got back to the boat I had lost my voice. I was so excited I had been screaming underwater! No one was there to hear me but I still had to do it to share a little of my happiness and gratitude with the ocean. This time I was the one singing the whale song! 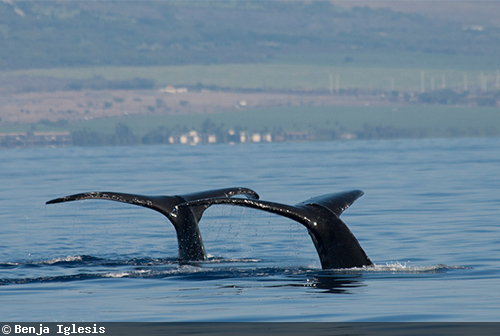 Now, I get to add my close encounters with the magnificent humpback whales to my list. Sometimes you just don’t need to travel to the end of the world to swim with some magnificent animals; you just need to get out, explore—and protect—your own backyard.