Editor's Note: Because of the skittish nature of great hammerhead sharks, these specialty dives are done with just two or three divers in the water at a time. In order to come away with a killer shot, you must not just have a camera—you have to foster a relationship with these amazing animals. 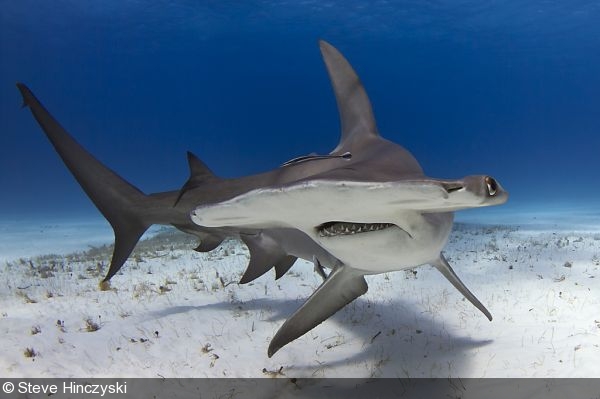 There’s a certain mystique surrounding great hammerheads. They’re considered to be a bit of a unicorn by some underwater photographers.

That skittish nature is what makes them hard to photograph and interact with when you find them. Like most big animals, they have seasonal migrations over large areas. Within those migrations, they move between the deep offshore waters and the shallow coastal waters. Unlike their close relative, the scalloped hammerhead, the great hammerheads don’t school. An encounter with a great hammerhead was with a single individual shark. 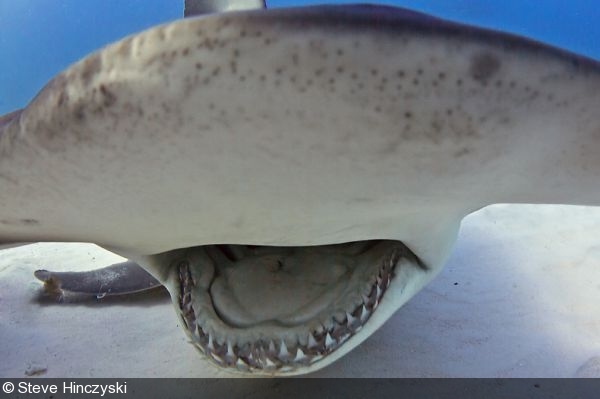 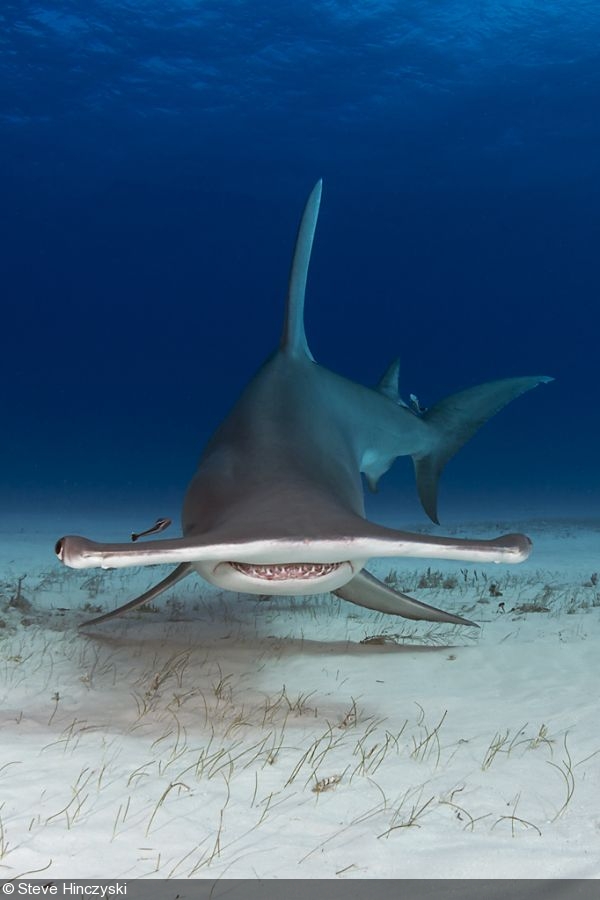 So where do you start? The Bahamas. Bimini Island to be specific. The best time for this is in the winter months of January through March. During this time period, great hammerheads frequent the shallow waters, and chances for an encounter are high. However, just because they are there doesn’t mean you’re going to be able to just jump in the water and start taking pictures. 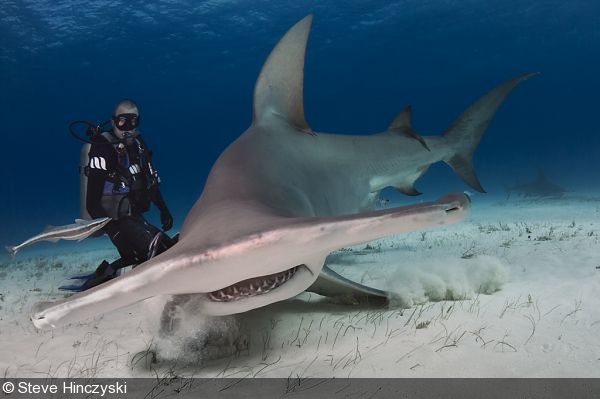 You wouldn’t just run up to an unknown big dog and try to pet it on the head. If you did, there’s a good chance you’d get bitten. Jumping right in with these sharks probably won’t get you bitten, but more than likely will get you a shot of its tail as it is leaving the area. 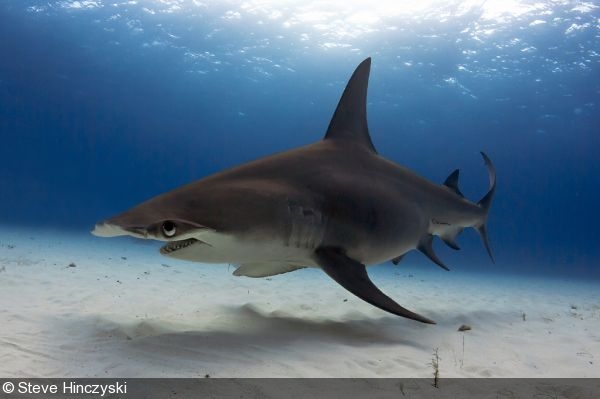 Getting Close to Great Hammerheads

So how do you get a positive encounter? Like any new relationship, you have to give it time and take it slow. Relationship? Yes. You and the shark are going to get to know each other and build trust with each other. You must get the shark interested in hanging around. And it’s no secret that means bait. If the shark is getting something it wants, it will be inclined to stay. 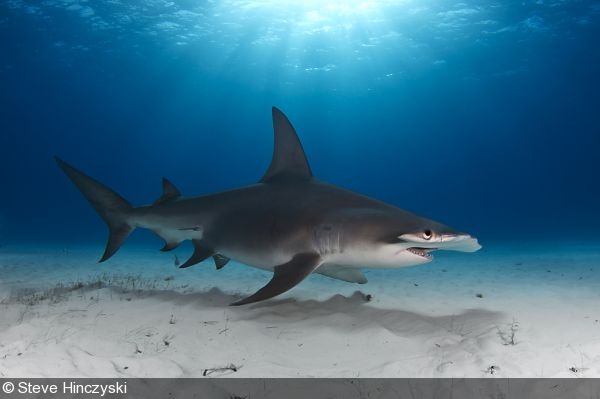 However, that doesn’t mean you should just dump a bunch of bait in the water. That’s actually a bad idea and will more than likely bring in other sharks, like bull sharks and lemon sharks that could easily take over the area. You have to be selective when baiting. If other species are taking advantage of your free meal, you have to remove your bait, taking away the reason for them to stay.

So now that you have a great hammerhead by your boat and it’s taking the bait you’ve left out, it's time to get everyone in the water right? Wrong. A boatload of divers giant-striding into the water is going to scare away the fish. 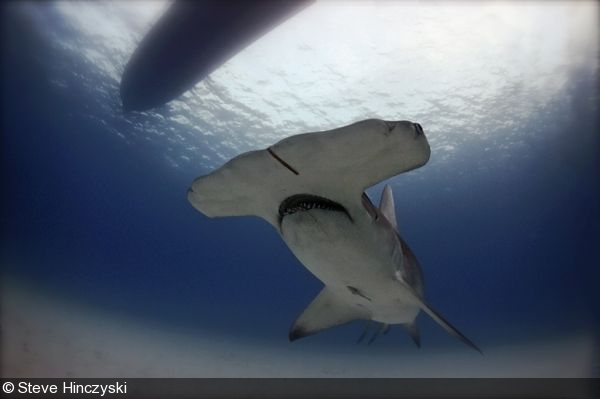 Two divers slipping into the water works best. Descend as quietly as possible to the bottom and settle down. While you’re doing this, the shark that was comfortable taking bait will back off. You are a strange thing that just entered its space and it doesn’t know what you are or what you might do. You are now going to continue working on the relationship.

Let it get comfortable coming back in for bait and don’t try taking photos yet. Leave your camera alone and just watch the shark. Look at its body posture and how it swims. As the shark is trying to figure out what you are and if you’re going to lash out, it is going to make very cautious approaches and quick exits. The shark will be swimming with a slight vertical roll. 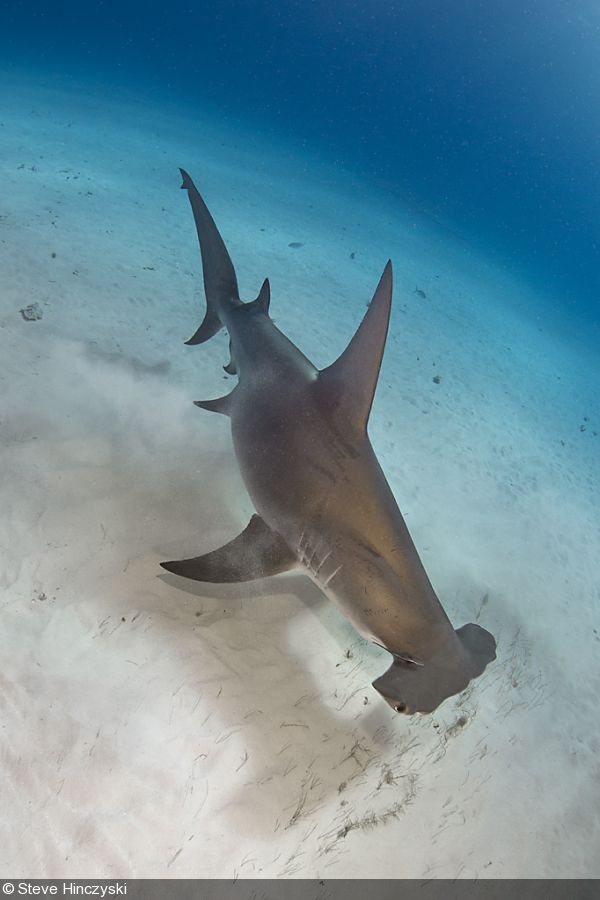 I interpreted this as a defensive posture that would allow it to quickly turn tail and run. As trust is established, you should see the posture change. The shark will start swimming flat and level. Let the shark get a couple of successful passes and feed. When the shark doesn’t think you’re going to harm it, it will stay around the bait longer. Instead of grab-and-go feeding, the shark will eat, make a small circle and look for its next piece of food.

Now it’s time to start taking pictures. Do not make any sudden movements as this could spook the shark. Keep your camera movements slow and deliberate. Set up the shot as the shark is coming in—don’t wait for it to be directly in front of you and then spring into action. 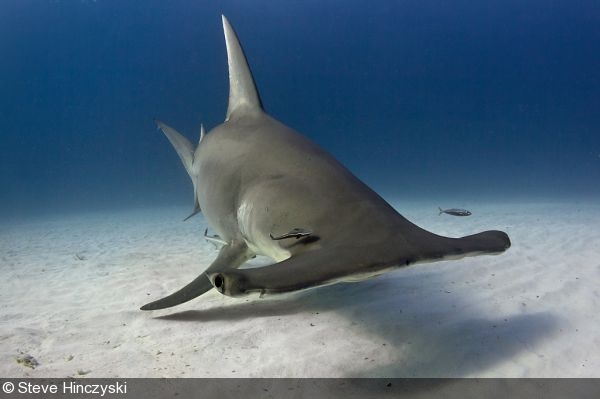 At this point I would recommend shooting natural light only: no strobes. The last thing you need is to scare the shark with a blinding flash of light. The shark is still trying to figure out what you are and is developing trust. If you scare away the shark, you have two problems. Attracting another shark and what to say as an apology to the rest of the divers on the boat waiting for their turn.

You and the rest of the divers are all working on the same relationship with this animal. Where you leave off, the next person is picking it up. Everyone on the boat must be of the same mind in building this relationship, taking turns rotating in and out of the water. Once everyone has had a turn or two, you can take the relationship to the next level and turn on your strobes. 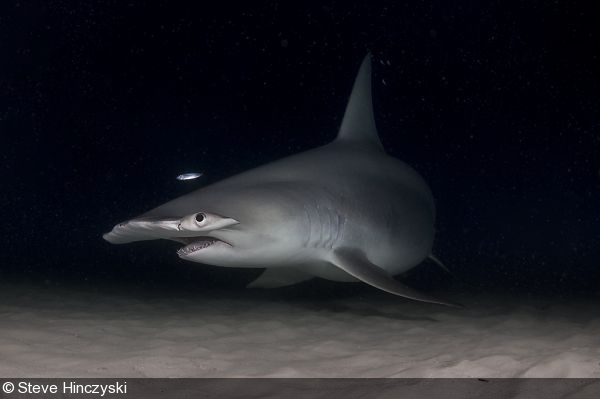 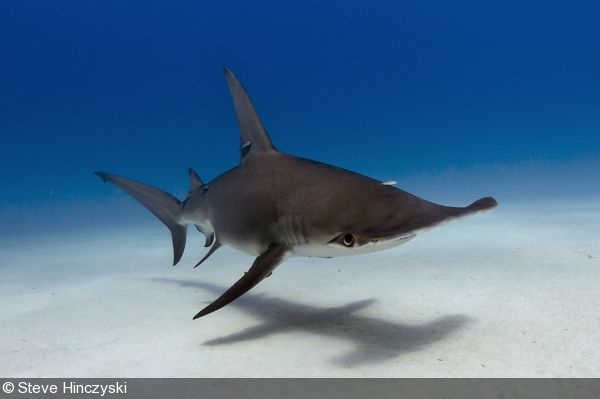 Again, proceed slowly. Take specific shots and avoid the “machine gun” approach. The shark may tolerate a couple flashes of light but may not care for a constant barrage of popping strobes. Think quality versus quantity. Keep your strobe power on the low side and point them out to the sides. These sharks kick up a lot of sand. The lower power and angled direction will help keep the backscatter down.

While you’re shooting, look for different angels to shoot and pay attention to its shadow. The shadow may be more “hammer” looking than the fish and this may really help accentuate the animal in the photo. Always keep the relationship in mind during your expedition. The trust between you and the fish is key to successfully getting great hammerhead shots. 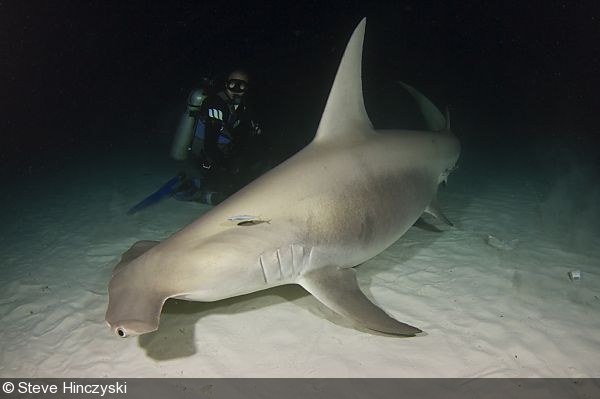