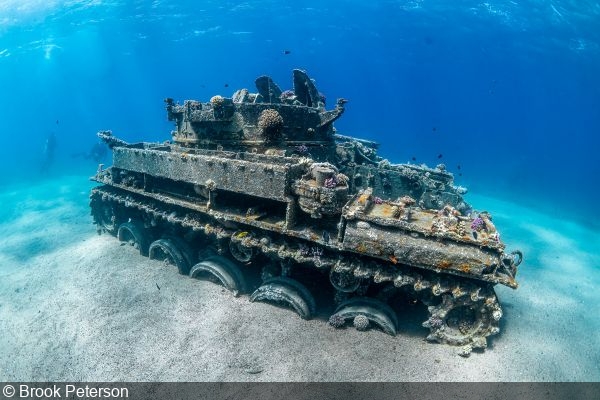 It is no secret that artificial reefs are one of the basic tools that conservationists use to promote a healthy marine environment. Man-made structures are often used to create a habitat for fish, corals, and other critters to thrive in. Sometimes a featureless sandy bottom is the ideal setting for such a structure, and it can benefit both man and beast. Nowhere is this more apparent than in Aqaba, Jordan.

Situated at the northernmost tip of the Red Sea in the Gulf of Aqaba, it is the only city in Jordan that has contact with the coastline. Because of its semi-enclosed form, the bay is susceptible to pollution, overfishing, and consequently, the destruction of marine habitat. Fortunately though, environmental advocates are making a difference. Surprisingly, tourism is one of the tools they are using to revive local waters. 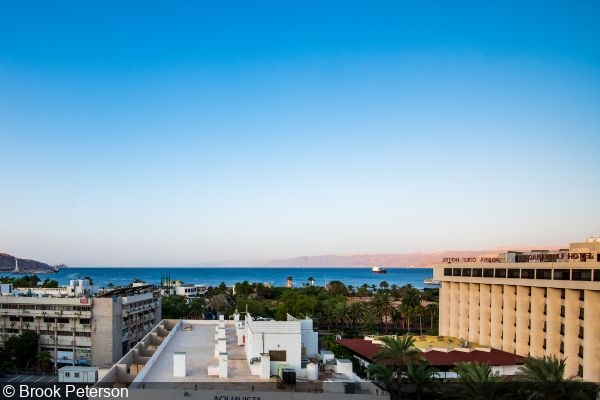 Downtown Aqaba, next to the Gulf of Aqaba

The Jordanian king, Abdullah II and his son, Crown Prince Hussein bin Abdullah are scuba diving enthusiasts. They have taken a “hands-on” approach to ruling the country, which includes an active role in preserving and restoring her coastal waters. In July 2019, under the king’s direction, a unique attraction was created, aimed at restoring the overfished sea as well as encouraging tourism. Enter the world’s first underwater military museum. These decommissioned historical pieces of military machinery and vehicles are arranged on the seafloor in a battle formation. At its most basic level, the museum serves as a tourist attraction. But it is much more than that. It is an effort to restore a thriving ecosystem. 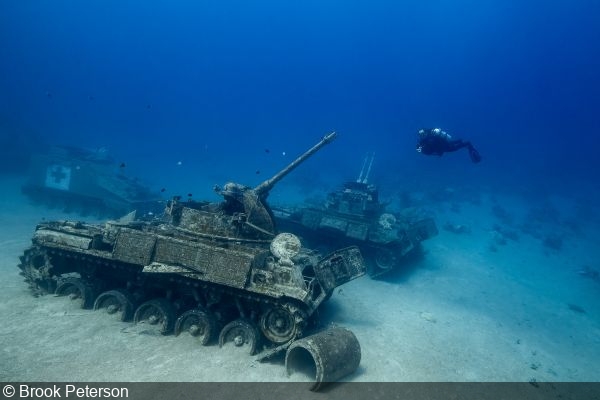 Tanks and a military ambulance in the underwater military museum

One of the great benefits of the underwater military museum is that it will provide a place for marine life to thrive and rebound. In just two years, since it was established, small fish have already taken up residence in and on the vehicles, and corals are starting to grow. The museum is laid out so that its shallowest vehicles are in just 15 feet of water while the deepest vehicles are about 90 feet deep. Accessible from shore, this allows both snorkelers and divers to enjoy the display.

For underwater photographers, the sites in Aqaba are a dream come true. Not only are there 19 military vehicles in the underwater military museum, but Aqaba’s shores also include several ships, a Hercules C-130 aircraft carrier, and even a Lockheed L1011 Tristar passenger jetliner. The museum itself includes two helicopters, tanks, an ambulance, troop carriers, and several other vehicles. As a photographer, you are limited only by your imagination. 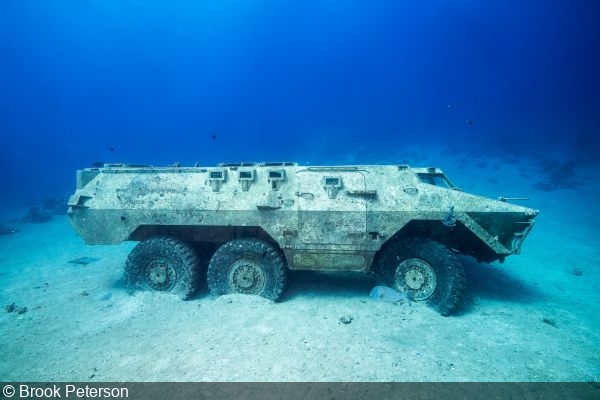 A military transport vehicle on display in the museum

When photographing man-made structures underwater, it is important to take into consideration which lens you will use. Is the structure so large that you can only photograph it with a wide-angle or fisheye lens? Are there straight lines that you want to emphasize that will require a rectilinear lens? Will you photograph the marine life on the structure or the structure itself? These are questions that lead you to better photography as you plan the images you want to achieve—before you take a giant stride. 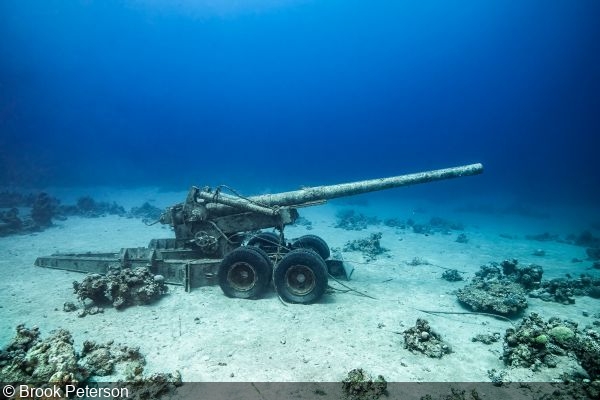 A cannon was scuttled as part of the underwater military museum

For the military museum, a rectilinear wide-angle lens such as a 16–35mm is appropriate. The vehicles are small enough to fit within the frame and they have straight lines that you would want to keep straight. Sea life has taken up residence on the vehicles and a rectilinear lens allows you to photograph the giant frogfish and crocodilefish that can be found there.

The Hercules C-130 and Tristar L1011 airplanes work well with either a rectilinear or fisheye lens. A fisheye, such as the popular Tokina 10–17mm or Canon or Nikon’s 8–15mm lens, works well. Because the aircraft are aerodynamic, most of the lines are already curved, so the distortion that a fisheye lens provides is not noticeable or it may even enhance the photograph. 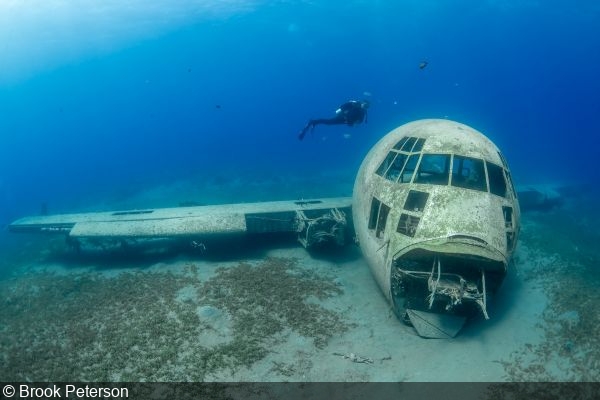 Natural light in Aqaba is outstanding, as there is rarely a cloud in the sky and the water visibility is excellent. The way you use the light can make or break your photographs. If you choose to use natural light, consider the angle of the sun. If you want to create a moody image with deep shadows, shoot into the sun. If you want a lot of detail and color in your image, make sure the sun is at your back. You should also consider whether you want a color or a black and white image. Shooting with the sun at your back will provide you with better color saturation, or better detail in a black and white image. Shooting across or into the sun will provide you with interesting shadows that make great monochrome images. 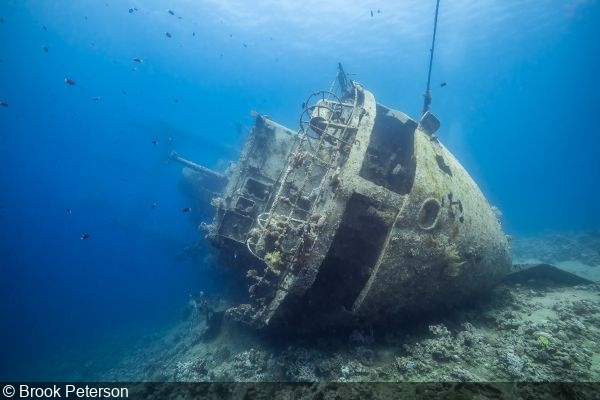 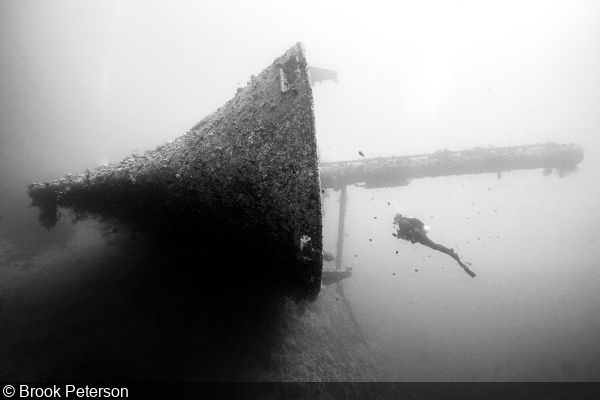 Dramatic shadows shooting into the sun on the Cedar Pride wreck

For excellent color photographs, consider using a filter, such as a Magic Filter. This is a colored filter that fits your lens and returns some of the red hues back to the water. It is especially effective for keeping the blue water blue throughout the image. Often, when an image is white balanced in post-processing, the water becomes a washed-out gray color. Filters prevent this and make existing color more vivid. If you are able to penetrate the wreck, there are a few pointers for taking better shots. When shooting from the inside, always look for a place where natural light is coming in and make sure the blue water is a component of the image. This lends your photograph some depth and gives the viewer a sense of being inside. When shooting directly into a dark space, the image will have a flat look without dimension and consequently becomes uninteresting. 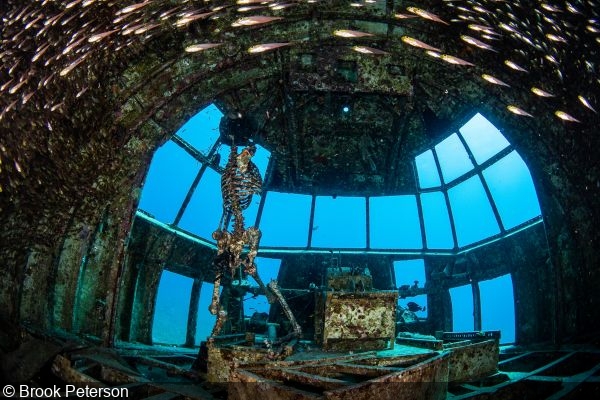 The cockpit of the Hercules C130 wreck with artificial skeleton 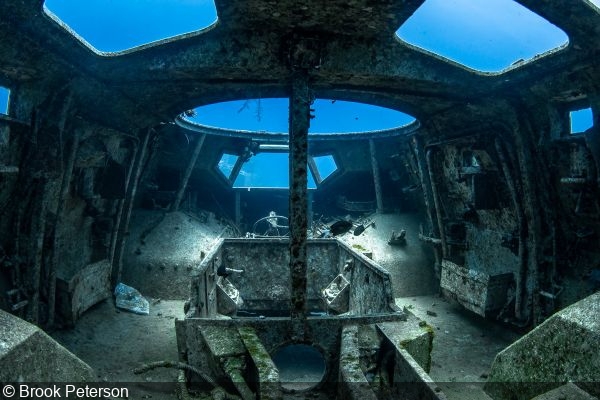 The inside of a military transport vehicle in the military museum

Although strobes are not likely to cover the entire wreck, they can play an important role in wreck photography. Strobes can be used to light important objects inside or outside a wreck, such as a bit of cargo or the cockpit of an airplane. If you have a remote trigger, then off-camera lighting can make stunning photographs. Use the off-camera strobe to light an object that is at a distance from the camera. The darkness between the lens and the object that is being lit will provide a sense of depth. In addition, a model who is swimming through a dark passage can hold an off-camera light or strobe behind his or her back to light up space behind them. This will prevent the diver from blending into the background and it also adds depth to the image. 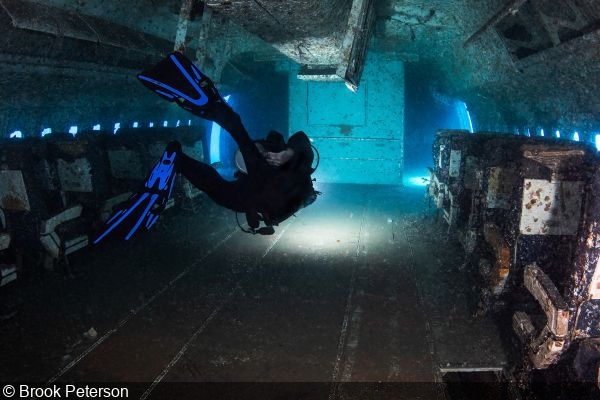 Diver with remote strobe in hand to light the background

The wreck of the Cedar Pride, which was a ship that was scuttled in 1985 by King Abdullah II, has now been underwater for about 36 years. It is covered in coral growth and is home to many species of fish and invertebrates. This vessel is a good example of how beneficial an artificial reef can be. Perhaps its most photogenic feature is the crow’s nest, which is dripping with soft corals and surrounded by reef fish. The ship lies on its side and the crow’s nest is the perfect size for a pair of strobes to light. The colorful corals are accentuated by the strobe light while the ship is too far away to light. This creates the perfect blend of sunlight on the ship with strobe emphasis on an interesting feature. 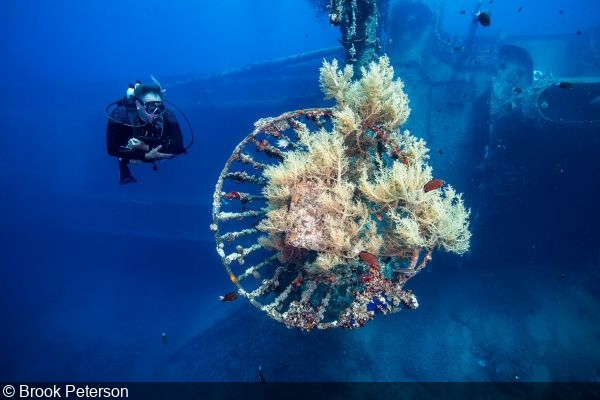 Planning and preparation are key to getting good photographs on wrecks. If you are going to use a model, talk to them beforehand and create hand signals for the pose you want, the distance you want them from the camera, and let them know what your objective is. This can save valuable time when you are trying to achieve a certain shot, as it is difficult to communicate details when you are underwater.

If you plan a trip to Aqaba, you are sure to have plenty of opportunities to practice your wreck photography. The variety of vehicles and man-made structures within recreational diving limits is unparalleled. It is also a great opportunity to see how man and nature can work together to benefit each other. There are many dive centers along the coast, including Deep Blue Dive Center, a PADI Five Star Dive Center, and hotels are abundant both in the city of Aqaba and along the coast. 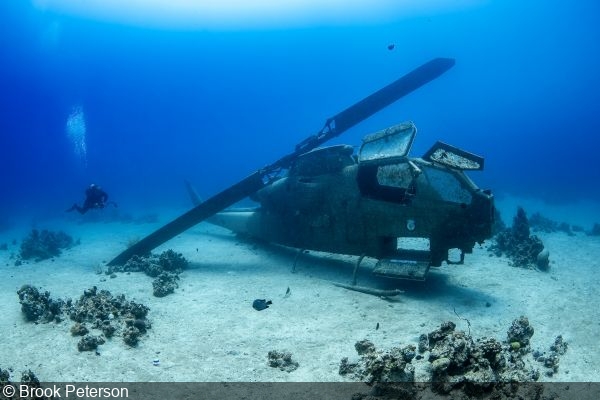 A military helicopter sits in the sand waiting to be explored 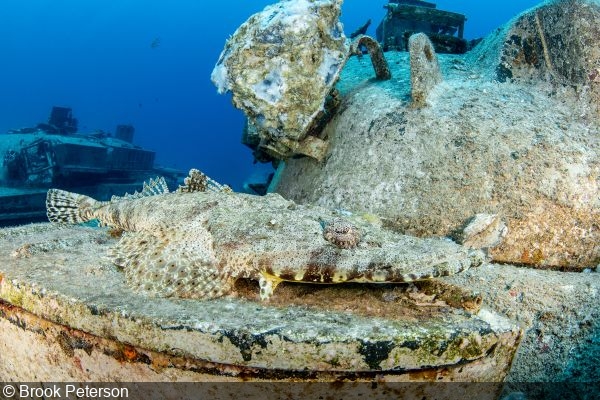 A camouflaged crocodilefish hides on a military vehicle