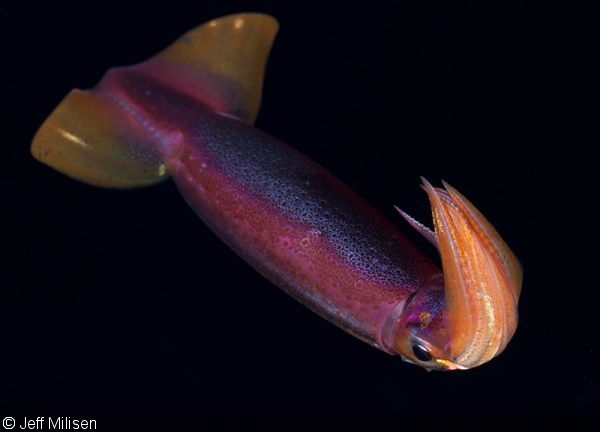 Unlike observing life on most reefs, black-water diving—night diving over the open ocean’s deepest and most remote stretches—is the pursuit of species and behaviors which have never before been observed. Black-water virgins are affronted with a whole world of animals they could scarcely have imagined. As one gains experience in the nocturnal pelagios, the surprise at finding something new is replaced by a rabid sense of wonder and an infectious obsession to learn more.

Kona, Hawaii is special because deep water can be found very close to shore. Plankton drifts throughout surface waters all around the world, but true mesopelagic vertical migrators and the rarest of deep-sea freaks will only be encountered in water that is over a few thousand feet deep. It is one thing to observe such natural rarities, but still another to document them properly with photographs and descriptions. This article is the first in a series aimed at shining a spotlight on aspects of an environment that most people have little concept of. 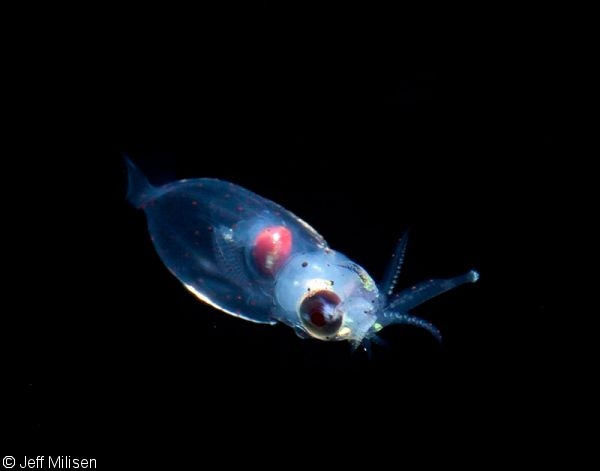 At only a millimeter or two in length and blending in against a world of marine snow, paralarvae can be difficult to see. Thus, a magnifying glass for both your eyes and your camera (aka a close-up lens) can be an important tool

This is the story of the purple-backed flying squid (Sthenoteuthis oualaniensis), an animal that has less than one year to be born, mature, breed, and die. As a group, squid are some of the most intelligent invertebrates and are thus capable of highly complex and often visciously barbaric behaviors. They are some of the most successful and bounteous species we encounter while black-water diving.

The journey begins at the paralarva, a term reserved only for the young of cephalopods. The flying squid paralarva pictured above was found at night in a loose aggregation drifting around 90 feet deep, 10 miles offshore. That puts it drifting overtop of 8,000 feet of seawater. At this stage and in this environment, predators abound. These paralarvae aren’t very mobile yet, so friends help diffuse out predation. 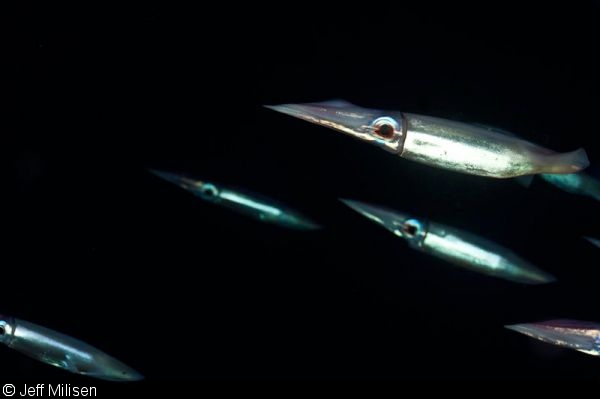 With small, fast-moving subjects, the only hope for a proper, in-focus exposure is to pre-focus from a distance in Al-Servo focus mode (using the deeper depth-of-field at longer focusing distances to your advantage), and keep the focus plane moving with the animal as you approach it

Aggregations become large schools of fast-moving calamari for visual open-ocean predators. Purple-backed flying squid are a main forage-base for more familiar pelagic animals such as ahi, dolphins, and sharks. The squid spend their days very deep, using the cover of dark to hide from predators. When confronted with dive lights, they will flit about in the distance, coming in only occasionally to catch prey or run from a predator. 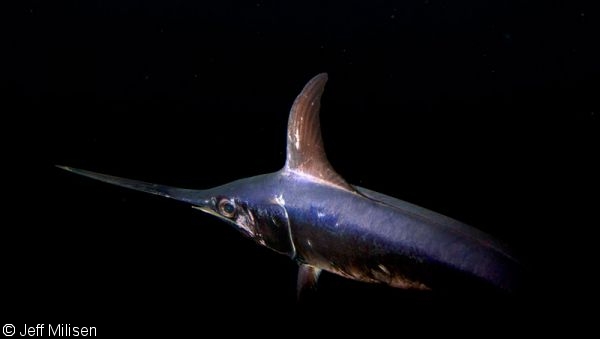 The squid’s abundant larger predators usually hide just beyond the diver’s lights and will make an appearance only on very rare occasions, so macro is a must for a black-water photo kit. The one time I had forgotten to swap the wide-angle lens for a macro, a swordfish appeared out of the darkness and meandered through the group

When you see hundreds of animals fleeing past, it is always wise to look for what is in pursuit. Life at the surface leaves open-ocean animals vulnerable to a huge variety of intimidating animals, such as swordfish (Xiphias gladius), fast-moving vertical migrators that love to eat squid. Watch out for the sharp end—it can be deadly. 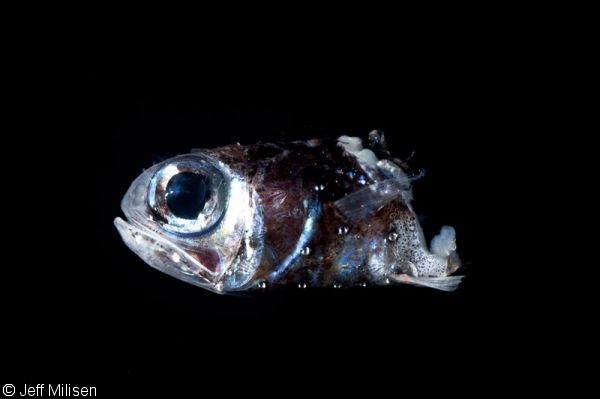 The mirror-like scales of a lanternfish are designed to reflect light back into the eyes of pursuing objects, or camera sensor. So, while most of the life on a black-water dive is transparent and requires lots of strobe power, try turning the strobes down a bit when focusing on shiny fish

The squid’s fast life and incredible metabolism means they must eat constantly. In fact, their days are spent at great depths in the “oxygen minimum zone” to help shut down their metabolism to make it through the daytime without eating. At night, they must feast, which means ascending to pursue the abundance of food at the surface. Their favorite foods are lanternfish (Myctophidae), which also migrate vertically, concentrating at the surface every night. In a flash of tiny scales that look like a flurry of snowflakes, the gasping head pictured above is a leftover. 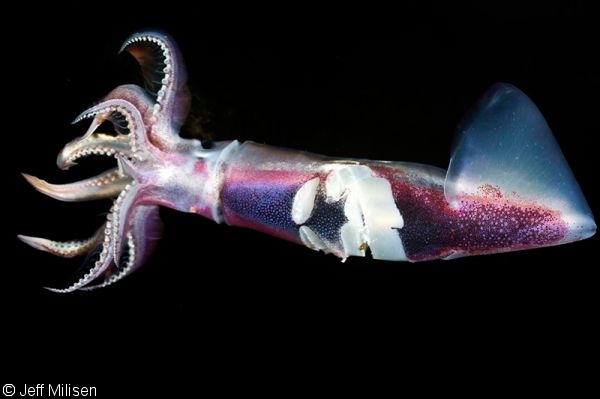 This squid was stabbed in the back by its own brethren. The chew-marks on its mantle are from the gnawing beaks of its school-mates, leaving it unable to move

When your whole life is spent days away from starvation, safety in numbers is a bit of a misnomer. I photographed one flying squid that had been paralyzed by an attack of its own. Its chromatophores flashed, its ink drizzled out, and the motionless animal was sinking helplessly into the depths. The attackers waited just beyond my lights to finish the job as soon as I left. 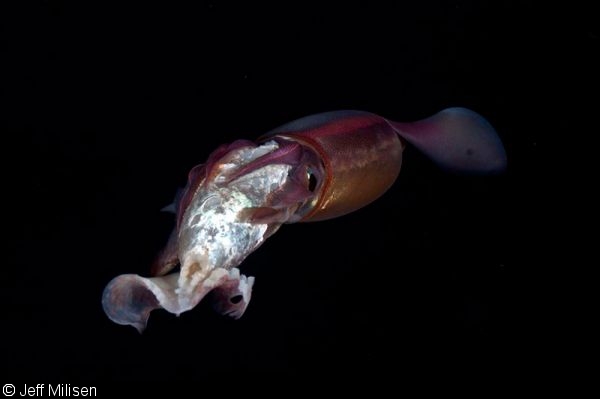