DPG editors Lia Barrett and Joe Tepper take a detailed look at five of reader Markko Junolainen’s images, giving him pointers and feedback on how he might improve them. 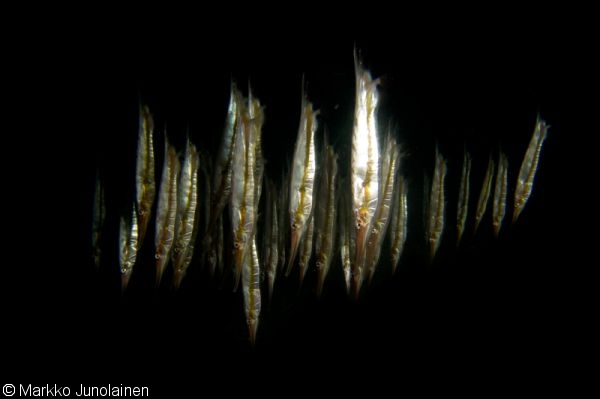 Joe: I like the idea of trying to make the razorfish pop from the black background by using a high shutter and your smallest aperture. The difficulty lies in that when you let in such little ambient light to create the black background, you are forced to have your strobes on “full blast” to illuminate the subject. With such reflective subjects as the razorfish, it’s hard to use full strobe power and not blow out their shiny bodies. I think your best bet to make the most out of this image is to use the burn/dodge tool in post-processing to eliminate over/underexposed areas. Also, to make the composition a little more interesting, consider tilting the camera to create diagonal (leading) lines in the frame.

Lia: Shiny animals are challenging—that's a fact. When you are using strobes, the deflection of light causes “hot” spots if the light and angle of the lens are not positioned properly. And when you have so many different elements facing different directions, this task is made even trickier. But I would consider lowering your strobe power down a bit as well as your shutter speed. I would play with both the positioning of your strobes (pull the arms out to the side a bit more), as well as the light angle to see where the greatest concentration of power hits. I would also try stepping back a bit to lessen the impact of your light (diffusers on your strobes is recommended). If you lose some of the black background in this process, you can compensate for a slightly lighter exposure in post-processing by pushing and pulling your levels, but do not rely on this saving grace too much, for you will start to reveal “noise” in your shadows if you try to lighten it up too much. 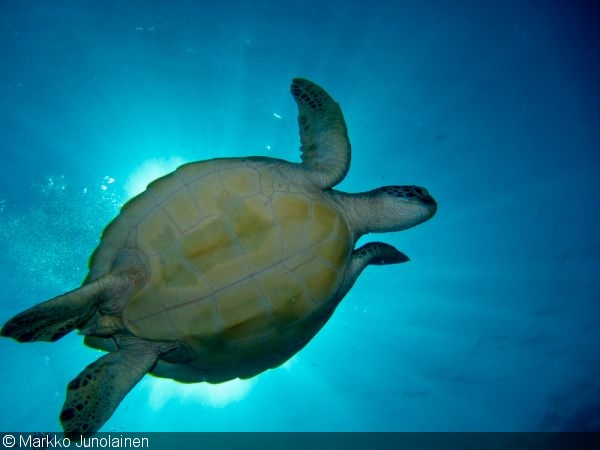 Joe: I love the thought you had behind this shot—using the turtle to partially block the sunrays. I think where it falls short is that it’s not quite a silhouette image and not quite a properly lit one. You’ve had to use a fast shutter and closed aperture to freeze the sunrays, which means you’ll need a lot of strobe power to fully illuminate the turtle’s underside (I’m talking two pro-level strobes). Personally, I’d turn off the strobes and go for a more abstract, silhouette shot. Contrast the turtle’s distinctive shape against the brilliant blue and light rays and you have a much more powerful image.

Lia: Okay, Mr. Markko, I’m going to go ahead and pause here to encourage the use of a lower shutter speed. 1/500 of a second is often too fast for strobe power (shutter is too quick to capture the light output, and so parts of the frame appear unexposed). Even though this is not showing up in your case, I would suggest you try to vary your shutter speeds, especially when dealing with artificial light (you can compensate for exposure with depth of field). That being said, I see how you are trying to expose for the sunlit sky while bringing out the belly of the turtle with light. Because you have to be very close to achieve this type of shot and still be within lighting range, I would encourage you to use a fisheye, so that you can get the light power as close to the subject as possible, and still have negative space to showcase more of the sunburst behind the turtle. 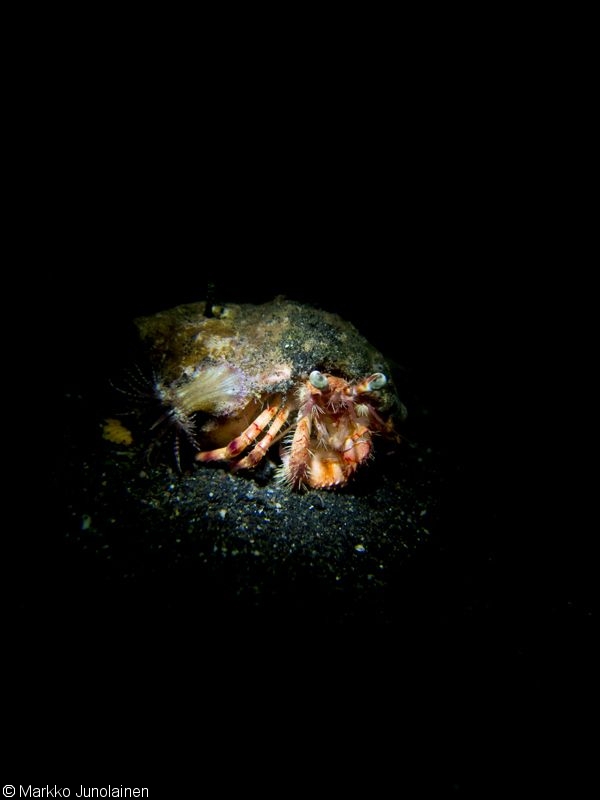 Joe: You’ve successfully executed quite an advanced lighting technique—snooting—without strobes, fiber-optic cables, or an actual snoot! The narrow beam of your handheld torch works as a light beam, selectively illuminating the crab subject while keeping the distracting muck background of Lembeh in darkness. The only real change I’d make to this image is cropping it so that the subject isn’t bulls-eyed in the frame. Instead, make the focal point of the image align according to the rule of thirds.

Lia: I see your technical skills extend beyond gas blending abilities, so nice work! Maybe next time, just for practice, try varying the angles of both your lens and your torch. Play with the negative black space and try bringing the subject all the way to the bottom—and even break the rule of thirds law that Joe suggests—but in a way that demonstrates the reality of a bottom-dweller. 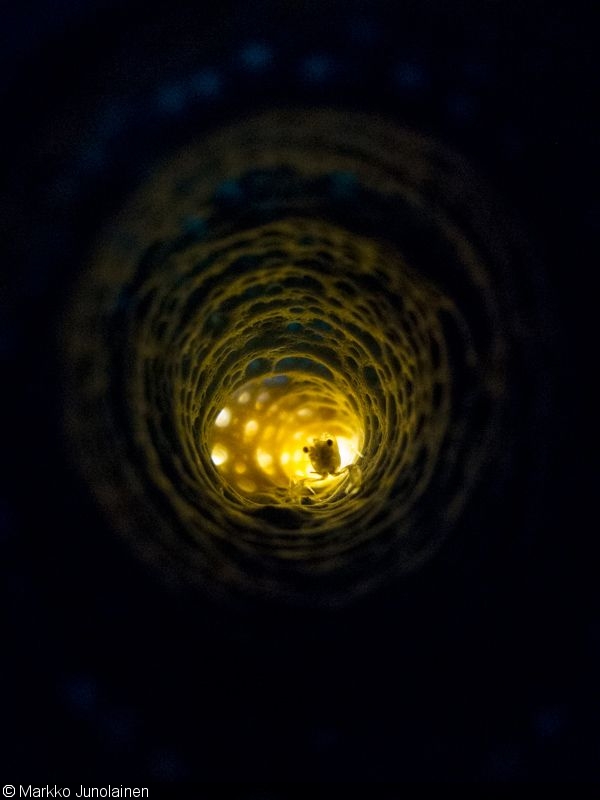 Joe: I've tried this technique many times before and know just how difficult/rewarding it can be! You’ve done an excellent job backlighting the subject and the sponge; often in these backlit macro images, the strobe light can be well overexposed, blowing out the image. However, I would have also liked to have seen a little strobe light on the front of the subject. This would add some of the detail missing from the image, making it less of a silhouetted shot, and more well-balanced between the light coming from behind and that hitting the subject straight on.

Lia: I love that you backlit this image. I think it shows the creative thought that you’re putting into your process. Also, you’ve implemented an open aperture that creates a shallow depth of field, and so a higher shutter speed actually works in your favor in this scenario. Some things to think about for next time: I would suggest moving in a bit or cropping so that the subject isn’t dead center. Plus, if you have the ability to move your light around a bit, or better yet, have your buddy hold it for you, it would be interesting to see what other angles and lighting positions you might be able to catch the shrimp in so that you can reveal more of its body. Finally, because of the use of a wide depth of field, you are getting a few blue spots seeping in—which are actually beautiful and almost painterly. Moving your lights around to pull out more of these colors actually adds to the interest of your overall image, so if you happen to see these sorts of elements and “mishaps” appearing, think about how you can utilize them to add that extra appeal. 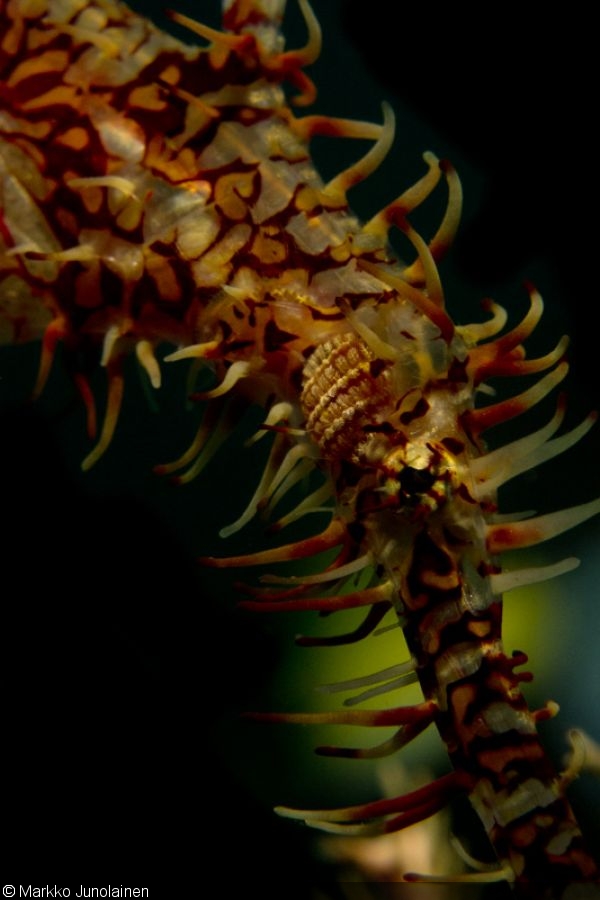 Joe: Call me old-fashioned, but I think this image would benefit from being more of a traditional portrait. Ghost pipefish have a curved, diagonal positioning in the water column that make them a natural for dramatic macro portraits, or even “wide-angle macro.” Cropping in as much as you have here is a bit disorientating and could be jarring for anyone who doesn’t know the full shape of a pipefish. One of the golden rules for macro photography is not to cut off part of your subject—you’ve cut off the fish in both the back and front of the frame, which also makes the composition seem a bit cramped. Back up a little next time, and capture the full beauty of the pipefish.

Lia: Ghost pipefish are not easy. They hover in that lovely little category with seahorses in that they don’t sit still, and so getting their eyes in focus can be a challenge. Here, instead of getting in close as you have, I would go for a “clean” shot by simply stepping back a bit and shooting the entire animal against an open water column. You can light it and expose for a dark background if that’s what you are going for, but if you try to crop in too tight, you lose context in such a complex animal. Also, watch out for your strobe placement and exposure—this little guy is a few stops underexposed.

Joe: Almost every one of Markko’s images in this portfolio displays a difficult, creative technique: backlighting, silhouettes, snooting—they’re all here. While these creative techniques aren’t always executed perfectly, it seems Markko understands their use and how thinking outside the box can turn the ordinary into something special. The next phase is refining each technique through practice. Of course, perfecting techniques is time-consuming, but knowing when to use each creative technique is something you can’t teach, and it’s a skill Markko already has.

Lia: I’ve got to say that Markko’s work has a lot of potential. He has already entered the realm of underwater photography where he isn’t just shooting identification shots, but has been testing techniques that he’s picked up from years of experience. My suggestion would be to play around more with ratios of shutter speed, aperture, and lighting, and to concentrate on making adjustments relative to varying circumstances. Otherwise, perhaps show us some of your wide-angle work! It’s a great next step even if you “love the small stuff.”

About Markko Junolainen: A recreational and technical diving instructor and avid cave diver originally from Estonia, Markko has been shooting underwater for 6 or 7 years. Due to baggage limit allowances, he has stuck with his compact camera setup with just one strobe. He currently lives in Singapore.