Pro underwater photographers Jeff Milisen and Rico Besserdich take a detailed look at five of reader Joerg Blessing’s images, giving him pointers and feedback on how he might improve them. 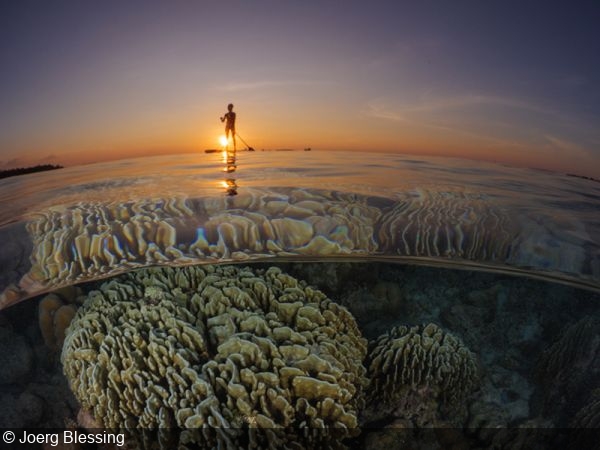 Jeff Milisen: You nailed a lot of the points that make split shots so difficult: find compelling subjects both above and below the water, keep water off the dry part of the dome, balance the exposure, and so on. I even really like the downward angle you chose here to give us two views of the coral: through the water and then again through the surface. Where this particular image starts to come apart is the composition. Stacking the paddle-boarder against the sun was probably intentional, but it is confusing too many elements together. And while the sunset sky is pretty, it creates a lot of negative space. I want to see the paddle boarder closer to the camera and moved away from the sun.

Rico Besserdich: It’s always good to get inspiration from other photographers—especially when that inspiration is David Doubilet! Split shots show two different worlds, above water and underwater, in one and the same picture; this was successfully implemented. The fisherman with his canoe provides that certain something; without him the picture wouldn’t be memorable. Some areas of the corals have rather distracting chromatic aberrations (blue and green color fringes in areas with extreme contrast differences), and the appropriate post-processing work would help here. Also, there is already clearly visible vignetting and you might even want to increase this vignetting in post. This would accentuate the mood of the picture and—as a useful side effect—the lower right and left corners of the picture, where nothing much happens anyway, would be made a little more homogeneous. Regardless, I find this is a very compelling image. 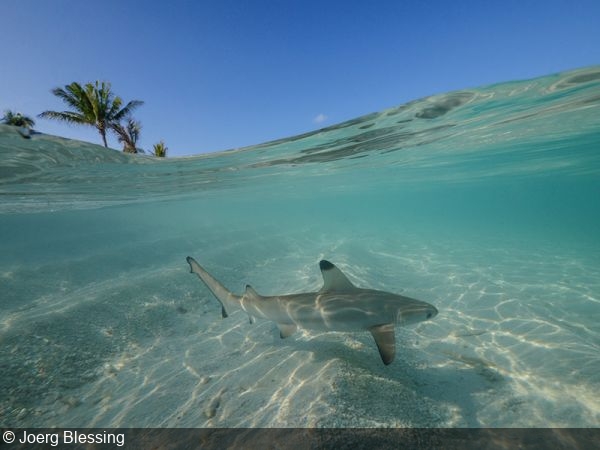 Jeff: Another image showing that you possess the know-how for an effective split shot. This one could almost be from Renee Capozzola’s memory card with just a few quick fixes. First, the underside of the water can be a beautiful addition, but here it is taking up too much space. I would have also wanted the shark a little closer and facing the camera. And the fact that it is turning slightly away means that its head—the focus of the image—is in a shadow. A viewer’s eye will be naturally drawn toward lighter shades, so in this case, I find myself staring at a shark butt even though the head is visible. Compositionally, the other main element—the palm tree shoreline—is cut off. And finally, while the sky is a pretty blue, the underwater lighting is flat. This is where waiting to shoot until the shark was a little closer would have brought some drama and perspective into the shot. Alternatively, some artificial light would have helped as well.

Rico: Even absolutely flat water can have photographic surprises! I like the light reflections on the seafloor as well as on the water surface. This is definitely an interesting image. I would say that there is a little too much negative space in the picture, too much sand and not enough other things for the eye to discover. I would recommend having the shark larger in the frame, or even much smaller—a visual stimulus in the background, allowing the foreground to be defined only by colors, reflections and structures. In the lower part of the picture, the contrast is a bit weak and the white balance should also be corrected, as a cyan color cast dominates here. As an interesting alternative perhaps, with a little work in Lightroom or Photoshop, this could be a very nice black and white image. 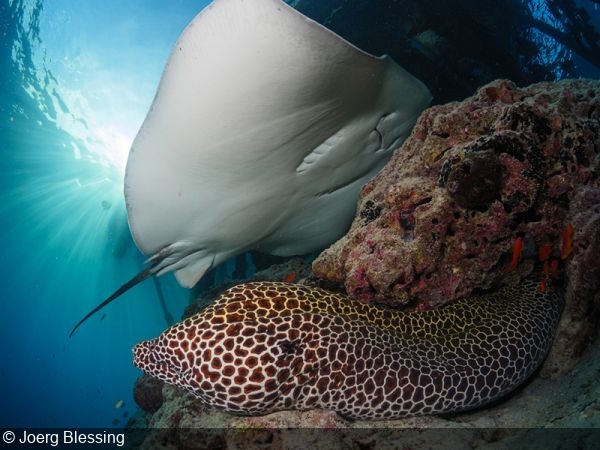 Jeff: Now this is cool! Everywhere I look there is something fun. The stingray up top, the beautiful moray across the bottom, godrays to the left—the whole image just works! If I were to tweak anything, I would have wanted to know that the rock would cast a shadow across the face of the ray and worked to plan accordingly. It looks like your right strobe didn’t fire, which could have helped if it was aimed right. Alternatively, the shot just before this in sequence might have featured the ray to the left and in more light. Finally, the wing was cut off at the top. But I’d like to repeat my opening, as it sits, this shot works!

Rico: An striking and almost abstract underwater picture! I was drawn to this straight away. The colors are 98% correct (only a very minimal cyan cast), the image sharpness is good, and the composition is interesting. The abstract touch does mean, however, that non-divers and people unfamiliar with underwater fauna and flora may find it difficult to see what exactly is going on in this picture. There’s nothing wrong with that per se, but purists interpreting underwater photography as simply documentary photography could have difficulties with such an image. In terms of post-processing, I would decrease the highlights a little to repair the areas in the sun that are slightly too bright, and I would increase the shadows a little to brighten the dark areas in the upper-right half of the image. 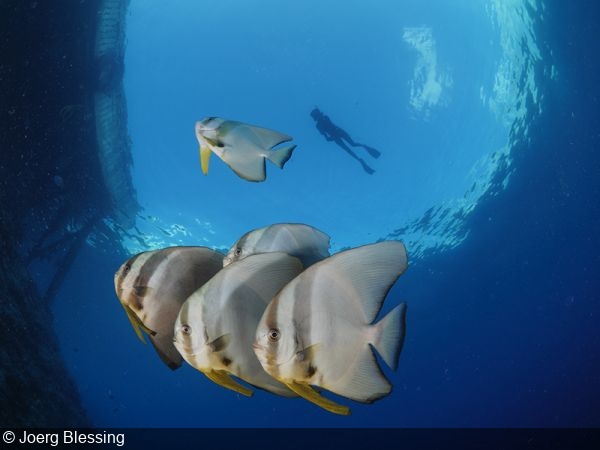 Jeff: I love batfish compositions! They are such a striking fish. And I really like the looming dock in the background. What this shot is missing is… something. There is a lot of negative space on the right and up top. And when it comes to Snell’s Window, it helps to be close to the surface to accentuate the effect. I think the model could play a more prominent role here, too. People are vessels through which viewers might see themselves in the image, but the swimmer is a tiny, background afterthought. Bring her in, have her interact, even if she is just looking. She is the story, the batfish are the eye candy.

Rico: A successful photo, especially due to the effect of Snell’s Window and the inclusion of the snorkeler on the water surface. Well done! The colors are good and so is the image sharpness. In terms of composition, the image has a bit too much negative space, which could be quickly solved by cropping in post-production. The floating particles in the darker areas of the image could also be touched up. Strobe positioning is fine, but the strobe arms seem a little too long for this sort of use of a fisheye lens, i.e., the distance between the strobes and the subject is too large. You can see this in the shadow on the middle batfish as well as in the floating particles. Incidentally, you don’t have to work with two strobes all the time, even with wide-angle photography. Images like this can work out nicely using just a single strobe. Having said all that, this is still a pleasing shot. 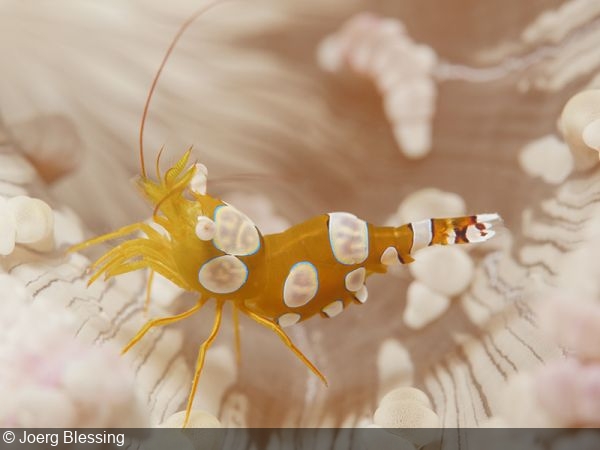 Jeff: Ahh, a simple animal portrait. The eyes are in focus, the colors are right, but the background doesn’t exactly set the shrimp out. White backgrounds are challenging because, as I mentioned above, they draw the eyes. In this case, the white background is drawing the viewer away from the shrimp. Compositionally speaking, I want a little more room in front of the shrimp to allow for movement.

Rico: Here, the subject is filling the frame nicely and the anemone (presumably) works well as a pastel background. I think the problems in the image are mostly caused by the equipment used. A 60mm macro lens mounted on a 2x crop factor camera is actually a good configuration as the resulting focal length of 159.6mm (60mm x 2 = 120mm, and 120mm x 1.33 focal length extension factor caused by the flat glass of the macro port = 159.6mm) allows a good distance to the subject (no spooking) and proper setup of the strobes. However, this is actually already at the limit of what is advisable. Then, the wet lens was added, further complicating matters, since wet attachments reduce the depth of field and contrast. In order to make such a super-macro setup work, the aperture should have been no less than f/13 (or better still, f/16), rather than the f/11 that was used. Finally, for me, the eyes could also be a touch sharper, making it easier for the viewer to develop an emotional bond with the subject.

Jeff: Joerg has some great things going for him! He has an eye for some nice subjects and is putting them together in fascinating ways. I especially liked how he filled the frame with the moray-and-stingray snap. Where he could improve is probably in envisioning the shot beforehand and paying particular attention to the details of how it will all work together. He may benefit from slowing down and firing more clicks at each subject. At any rate, I really enjoyed looking at the diversity and overall quality of this portfolio.

Rico: Joerg has shown us a variety of beautiful and interesting things from the underwater world of the Maldives. My favorite is the sunset split shot, but the batfish and the eel-meets-stingray shot is cool, too. It’s obvious from his different image concepts that Joerg has already committed a lot of time underwater with his camera. (I recall dive instructors on island resorts betting on crab races and doing karaoke, and I think underwater photography is a much better use of your time!) Kudos to Joerg also for capturing images on “one breath”: Shooting while freediving ain’t an easy thing to do. I think Joerg mostly needs to pay more attention to finest details—whether it’s correcting color and contrast, cleaning up backscatter, or fixing fringes from chromatic aberrations. With a bit more practice and focus on developing his own photographic style—not an easy task, I know—I am sure that Joerg will enlighten us with many more interesting images from the beautiful waters of the Maldives in the future.

About Joerg Blessing: Joerg has been a diving instructor, surfer, and self-taught underwater photographer since 2013. For the last two years, he has been working in Baa Atoll, Maldives, and now enjoys freediving as much as scuba. He loves wide angle and playing with the light but does some macro photography in between—but only with a tank, of course! He’s currently enjoying being stuck on an empty resort island and having plenty of time to play with his camera. www.joergblessing.com