The Next Generation of Female Underwater Photographers
By Joseph Tepper, August 3, 2016 @ 05:00 AM (EST)

In this latest article in The Guide, DPG meets Indigo “Sky” Bolandrini, a talented young scuba diver who is ushering in a new wave of female photographers. 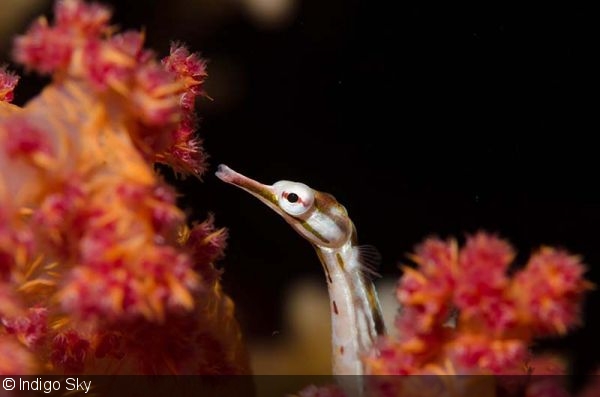 It was just one big masterpiece of art every time I went diving.
—Indigo Sky

The sun is rising on a new generation of female underwater photographers—and it’s framed against an Indigo Sky.

Indigo “Sky” Bolandrini might only be 15 years in age, but her resume reads more like an underwater imaging industry veteran of 15 years. With 600 dives notched into her weight belt, the young lady living in a small town on the Red Sea became one of the world’s youngest Junior Master Scuba Divers at age 12. Two years after picking up an underwater camera for the first time, she has advanced to a professional DSLR and nabbed an international photo award. She is Indigo in name. She is Indigo in spirit.

“I’ve had a passion for the underwater world since I was about three years old,” recalls Indigo, who won a silver medal in the 2016 World Oceans Day Photo Competition. “I would always be on National Geographic, and pretend to be a deep-sea explorer.” 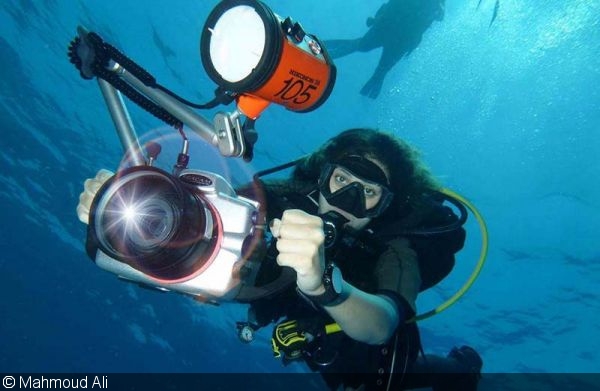 At just age 15, Indigo has already earned more than 20 certifications and won an international photography award

Indigo’s journey to becoming the next great underwater explorer began as a young girl, when she would freedive during yearly visits to the Red Sea from rainy London. But it wasn’t until her family relocated permanently that Indigo took the giant stride into the world of scuba diving.

What started as a simple Junior Open Water course quickly spiraled into a stream of specialty certifications such as Junior Dry Suit, Junior Project AWARE, and Junior Diver Propulsion Vehicle. Considering her voracious pace, we hesitate to place a number on it; however, as of today, Indigo holds 22 certifications. Recently, she became the world’s youngest certified sidemount diver.

“The vivid colors, the dancing fish and unique shapes always gripped my attention,” says Indigo. “It was just one big masterpiece of art every time I went diving.”

It wasn’t long before Indigo wanted to capture this underwater masterpiece for her friends and family to see. Two years ago, she picked up a GoPro and a torch for the first time. “Although I couldn’t do much with it, just to be able to capture our amazing underwater world in one picture brought a smile to my face,” she says. 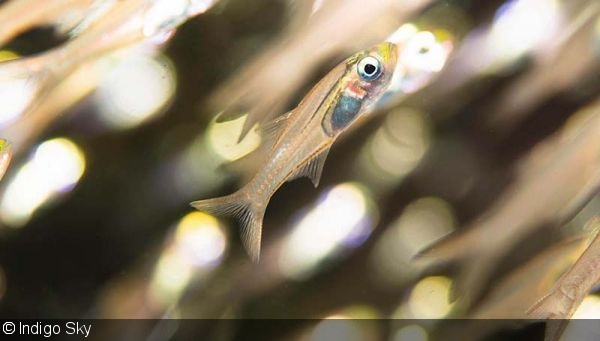 Indigo’s images often show techniques that aren’t learned until accruing many years of experience, despite the fact she first started underwater photography two years ago

Indigo’s insatiable appetite to push the boundaries of dive training serves as a harbinger for what comes next in the story. What started as “a fun little hobby” quickly sparked a desire to learn more. Intrigued by the huge DSLR rigs of other—much older—members of the local dive club, Indigo would ask questions, take notes, and absorb any advice to be had.

Her persistence paid off with a Sony RX100 under the Christmas tree last year. But that didn’t last long. Soon, the budding image-maker felt constrained by the compact and needed a more-capable tool to experiment with advanced techniques.

“I felt like I had reached my maximum level with a compact camera and no strobes,” says Indigo, who now shoots with a Nikon D7000 DSLR. “I couldn’t make the breakthrough with the pictures I was taking.” 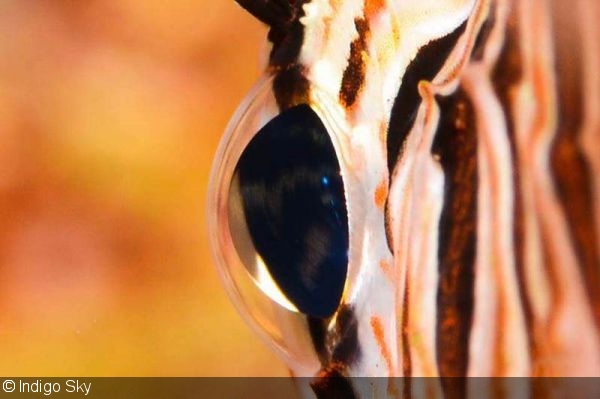 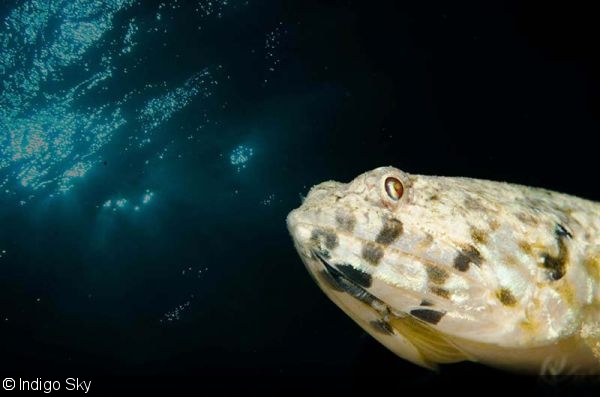 Using a DSLR was a significant upgrade for Indigo. Now, she’s experimenting with creative techniques like double exposures and bokeh

Wise beyond her years, Indigo realized that it is the photographer that makes the images, not the camera. However, with her new DSLR and strobes, she is able to experiment with techniques like double exposures, bokeh, and black backgrounds. We wouldn’t be surprised if a year from now she’s taking footage for an IMAX documentary.

If there’s anything slowing that prediction, it’s Indigo’s age. She admits that the constraints of school prevent a desire to travel and expand her underwater photo portfolio. But, like in all elements of her love for the ocean, high school is just a stepping stone to greater things. “One of my ambitions is to as work as a marine biologist when I am older and hopefully be able to merge my underwater photography into that,” shares Indigo, who hopes to be an ambassador for National Geographic Wildlife to other young divers.

What is perhaps most amazing about Indigo’s journey thus far is her desire to transform what she’s learned into a gift for others. Already, she’s focused on using her images to help inform non-divers of the threats facing local marine environments. And she’s currently teaming up with fellow whiz kid photographer Garri Emmanuel Tadlip (aka “Iggy”) to write at an underwater photography technique book aimed at a younger audience. 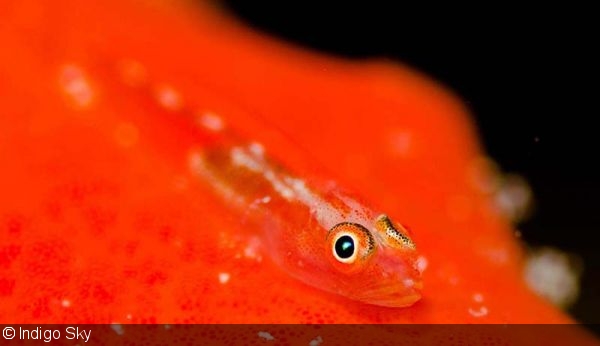 In 2014, we published a retrospective of female underwater photographers, “The X(X) Factor: Observations on Women in Underwater Imaging,” by Allison Vitsky Sallmon. In it, she asks some of the most accomplished female underwater photographers why they continue to pursue one of the least glamorous activities, often in the face of sexism from a once-male dominated culture. The answers from these legendary divers—including Anna DeLoach, Michele Hall, Jill Heinerth, Amanda Cotton, and Annie Crawley—are worth your undivided attention.

In large part, it’s because of the strength and unwillingness to bend in the face of pressure by these boundary-breaking women that young, female photographers like Indigo can excel so quickly. It’s part of the reason her ambition knows no bounds—aiming for lofty goals like National Geographic wildlife photographer or being inducted into the Women Divers Hall of Fame.

Take a close look at that Women Divers Hall of Fame logo, and you’ll spot a torch held high above the head of a female diver. Soon, that torch will be passed down from current legends of the underwater industry to young divers like Indigo to carry into the future.

Looking at what Indigo has already accomplished, it’s safe to say that future is bright. 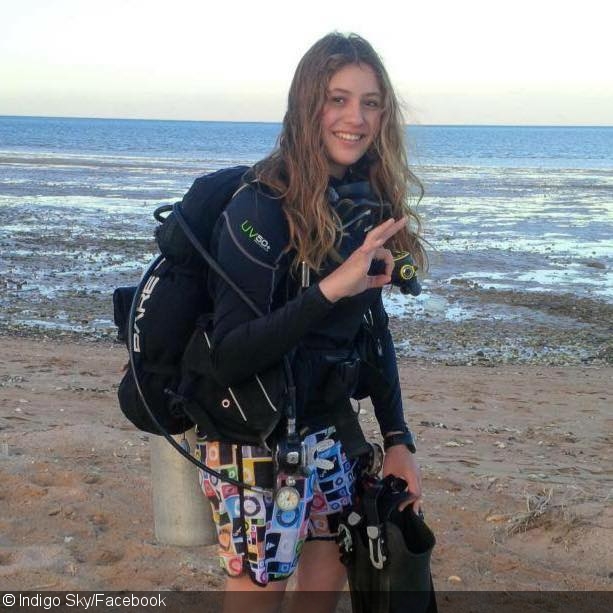