In this latest article in The Guide, Orla Doherty, one of the producers of the BBC’s Blue Planet II, talks about the experience of making the groundbreaking nature documentary 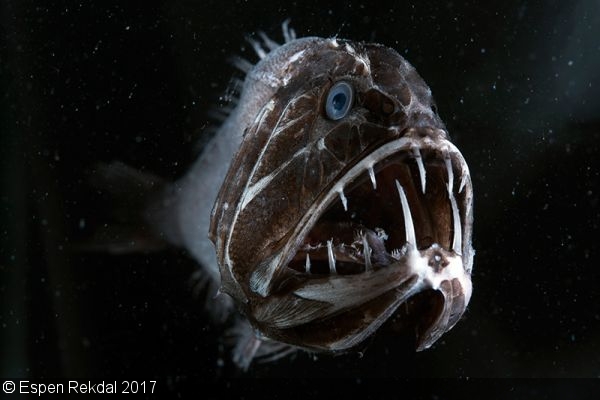 During their deepest dives, the Blue Planet II team crew came across many rarely seen critters, including the fearsome-looking fangtooth—which has the largest teeth relative to body size for any fish in the ocean

You know a nature documentary is going to be epic when it’s made by the BBC and features the dulcet tones of Sir David Attenborough. The latest effort, Blue Planet II, is a case in point, with the numbers to prove it: over four years in the making, some 125 expeditions in almost 40 countries, and more than 4,000 dives and 6,000 hours of underwater footage.

As the producer of two of the seven episodes in the series, “The Deep” and “Our Blue Planet,” Orla Doherty considers herself “blessed” to have been a part of the production, but she also knows what it takes to make a groundbreaking documentary, having spent 500 hours at bone-crushing depths in three oceans whilst making “The Deep.” During one deep dive, she even endured quite a scare when the submersible she was sharing with a pilot and cameraman began leaking—at 1,500 feet down. Fortunately, after 20 minutes, they finally fixed the faulty pressure gauge that was responsible, and carried on.

In the interview that follows, Doherty describes the experience of working with the production team—and being among the first humans to film what lives at 3,300 feet deep in the Antarctic Ocean. 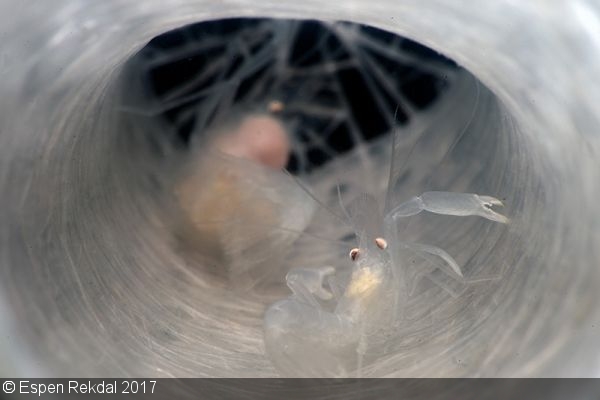 A shrimp couple living inside a deep-sea Venus’ flower basket sponge. Their home provides protection—but eventually, it becomes their prison. They enter through its latticed walls as small, young shrimp, but as they grow to full size, they are no longer able to leave the way they came in… 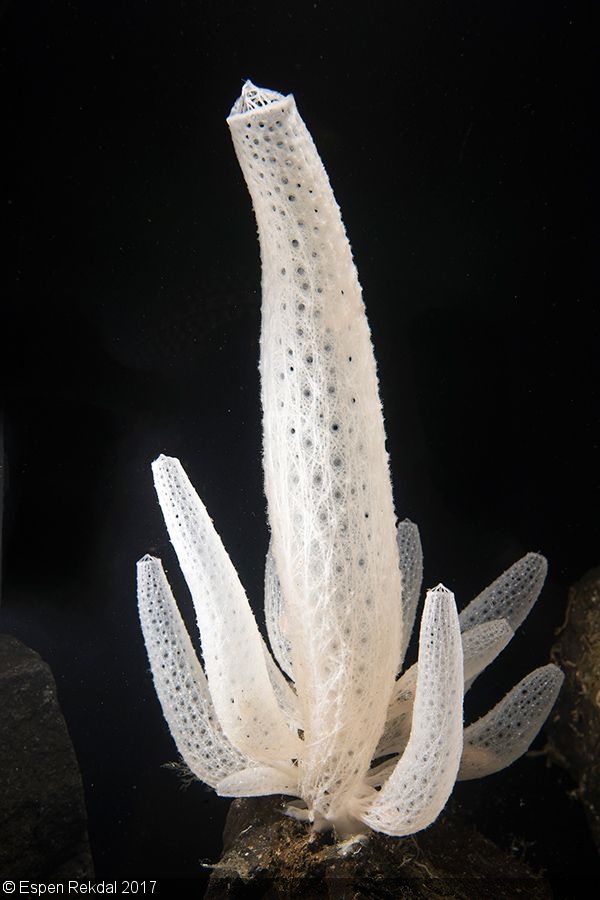 Venus’ flower basket: The Blue Planet II team filmed this sponge and its inhabitants off the Galápagos Islands but they flourish on the deep seafloor around the world

What got you interested in embarking on this career?

I started producing television because I found the idea of being able to creatively tell stories very appealing. I also did a chemistry degree a long time ago, and I’ve always been looking for the opportunity to put the science and the creativity together, and ultimately, I also happened to fall in love with the ocean along my life journey, and so for me ending up as being part of the Blue Planet II team has just been incredible.

What impact has your involvement in making Blue Planet II had on you?

I think being part of Blue Planet II has meant we have all been able to show our love for the ocean, and opens people’s eyes and minds and hearts to these incredible stories. Being able to spend the amount of time that we have filming, and using the amazing technology that we’ve had and even sometimes create—because the technology didn’t exist but we then made our own technology to capture things that could never be filmed before—I think being part of a project like this which is just at the highest possible quality of natural video programming made on the planet, it’s been a real privilege to be able to bring these incredible stories to the public that we wouldn’t perhaps find any other way. I think we’ve been incredibly blessed and lucky to be part of this, and I just hope that what we’ve done is received well, and opens people’s eyes to this incredible planet’s oceans. 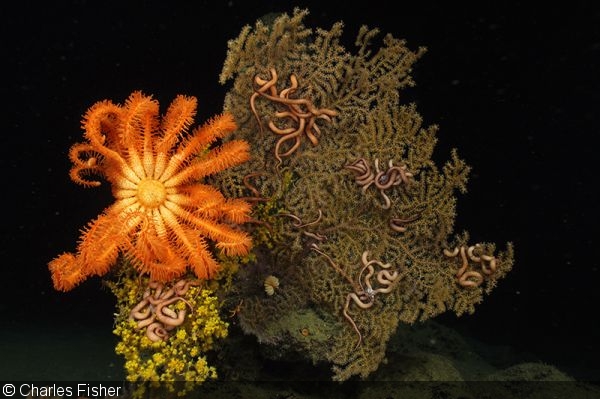 Incredibly, we now know that there are more species of coral in the deep ocean than on shallow, tropical coral reefs. They live as deep as 20,000 feet and some have been growing for as long as 4,000 years. Their delicate branches provide sanctuary for a wealth of life

You’ve produced two episodes—“The Deep” and “Our Blue Planet.” Did you have to approach these two episodes very differently? Or was there a particular goal that you wanted to fulfill when you set out to film them?

Yes, they were two very, very different films. For “The Deep,” I wanted to capture behavior in the deep—so animals doing things that we haven’t seen before. That was not easy, but we had some really, really good experiences with all sorts of animals, and it’s just brought the deep ocean alive. Up until now I think everybody thinks of the deep being a world just full of aliens and monsters, and yes that’s true, to some extent, but there’s also a side to the deep ocean that is utterly beautiful, and mind-blowing.

It’s like going to another planet, but a very beautiful, very interesting planet—not a lifeless planet with nothing happening on it. I just really wanted to capture that beauty and tell stories of beauty. We have an amazing story of two little shrimp, and it’s a love story! It’s a love story in the deep ocean, and that makes me very happy that we managed to deliver something that’s different from how we’ve seen the deep before. 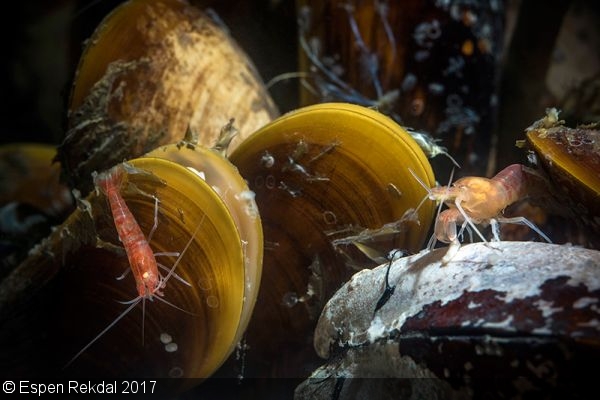 Giant mussels (Bathymodiolus childressi) grow at the edge of a brine pool, a hyper-saline lake 2,100 feet deep in the Gulf of Mexico. These dense beds provide food and habitat for shrimps, scaleworms, squat lobsters and a myriad other small creatures 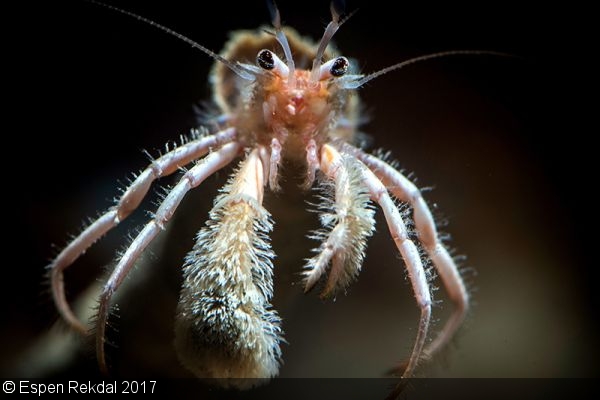 For “Our Blue Planet,” I really wanted to tell stories of how the ocean’s changing, but I wanted to tell the story with hope, and to say there is so much we can do to redirect the path of the ocean’s future, which is so important for our own future. We must help the ocean for our own survival. The ocean keeps our planet habitable, it makes life on this planet possible, and it is essential that we have a healthy ocean in our future. We’ve managed to film some incredible stories where things that were going really badly in the ocean have been turned around. So we wanted to be able to show stories of inspiration. Yes, it has some serious messages of how the ocean’s changing, but also hopefully will inspire an audience. 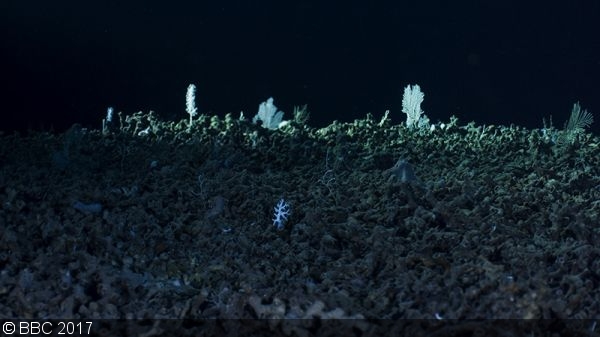 Deep reefs are being destroyed before they have even been explored. In the Gulf of Mexico, 2,300 feet below the surface, the Blue Planet II team filmed a reef where corals may have been growing for thousands of years. It had been raked over by a deep-sea trawler

Can you describe the experience of going one kilometer (3,300 feet) deep? Is there ever any sense of fear as to what you might find?

No, it was never a sense of fear. I always had a sense of excitement, and really, when you get in a submarine and you go down into the deep ocean, you think you know what might happen—because I would’ve chosen where we were diving for a good reason—but the point about the deep is we don’t know so much about it. We know so little about it that actually in many ways I always felt like anything could happen. Absolutely anything was possible down there. It was so inspirational. We were going places that nobody has ever been to before, and that was just incredible. 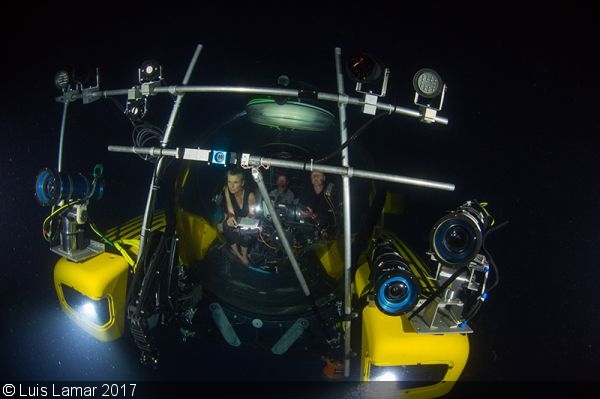 The Blue Planet II team in the submersible “Nadir,” capable of reaching depths of 3,300 feet. Over two years, the team spent 1,000 hours in submersibles around the world 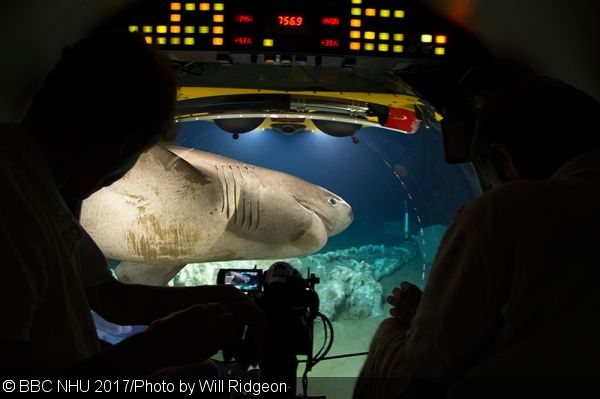 Taken from inside the submersible “Lula”: A bluntnose sixgill shark arrives to feed on the carcass of a sperm whale in the Atlantic Ocean. These large sharks have a very slow metabolism, conserving their energy in the desert of the deep sea. Scientists believe they may go for as long as a year without eating

Were there any challenges faced when working on this series or some memorable events?

We really wanted to film lanternfish in the sea of Australia, and that shoot did not work out for us because of an El Niño event that threw the whole ocean cycle off balance. I was really disappointed and upset by that, but two years later off the coast of Chile—so on the other side of the Pacific Ocean—I finally got to film my lanternfish and in an even more exciting way, because they were being hunted by seven-foot-long Humboldt squid. Now I think we captured everything I had really hoped we would capture, and so much more besides. 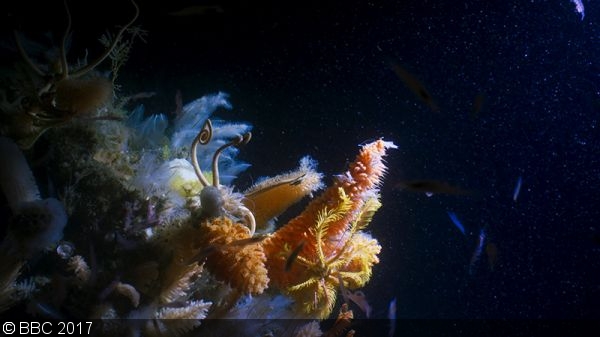 In the deep waters of the Antarctic Sound, the Blue Planet II team found a carpet of life, teeming with dense coverage of invertebrates including giant sponges, seven feet tall 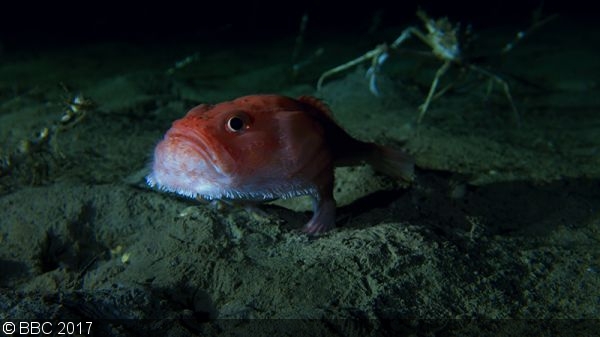 This sea-toad lives in the deep waters of the Gulf of Mexico. It sits patiently on the seafloor waiting for a meal to come towards its large, gaping mouth. Its pectoral fins have evolved into feet 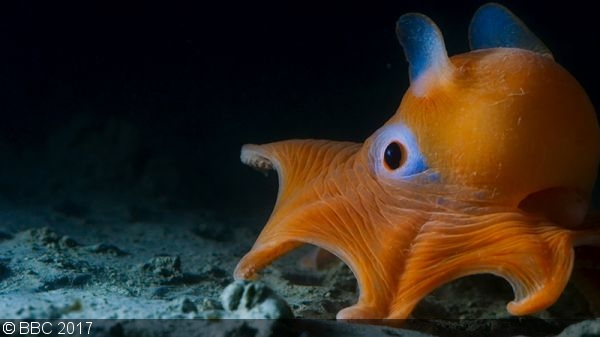 This flapjack octopus lives in the deep waters off California. It is a type of dumbo octopus, so-named for the fins it uses to move through the water

Could you ever see yourself doing anything else if you weren’t a producer?

You never know what your alternative life would be, but I think for me, you know, a transforming time was the time that I spent living on the ocean and really getting to know it. So if I wasn’t making Blue Planet II, I would be doing something else that would keep me out on the ocean—but also hopefully communicating about just how magical the ocean is. 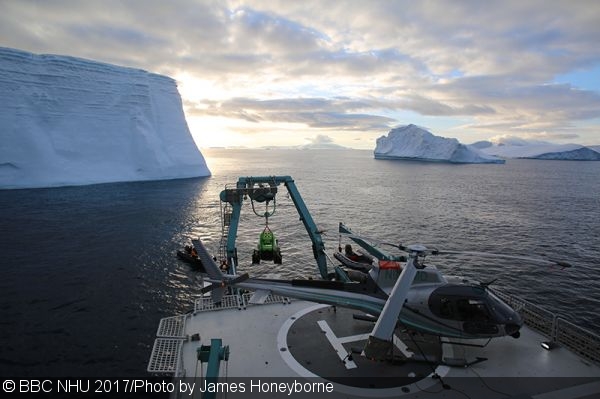 Blue Planet II debuted in October 2017 in the UK, Europe and Asia, and will air on BBC America in 2018. In Singapore, the series is currently showing on BBC Earth (Starhub Channel 407) every Tuesday at 8pm, and is also available on BBC Player.