DPG would like to thank Inon for supplying the Z-330 strobes used in this article. Unless specified otherwise, test images were shot using a Nikon D500 in Isotta housing with the Nikon 60mm macro lens. 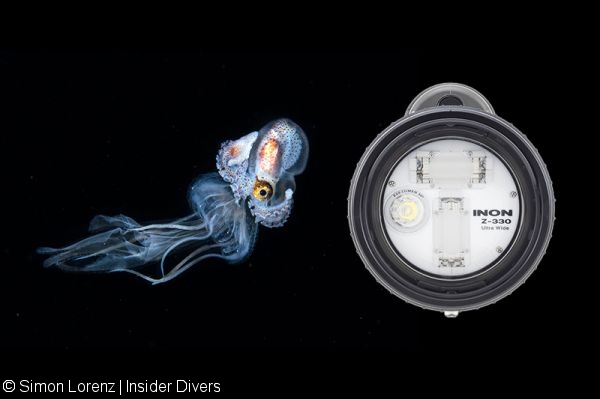 Having tested Inon’s Z-330s extensively in the Maldives with wide-angle subjects, I was curious to know how the new strobes would stack up when shooting macro. While the new model’s increased light output is crucial for wide angle, it’s less of an advantage for lighting macro subjects at close range. But the Z-330 was enhanced in various other respects, over its predecessor, the Z-240, so a number of interesting questions presented themselves.

Would the diffused light of the domes translate to usability for macro photography? What benefits would the new controls bring when shooting macro subjects? And most of all, how would the new light shades—which proved challenging to use for wide angle—fare when capturing the small stuff? To find out, I tested the Z-330s during various Insider Divers group trips to Raja Ampat and Triton Bay in Indonesia. 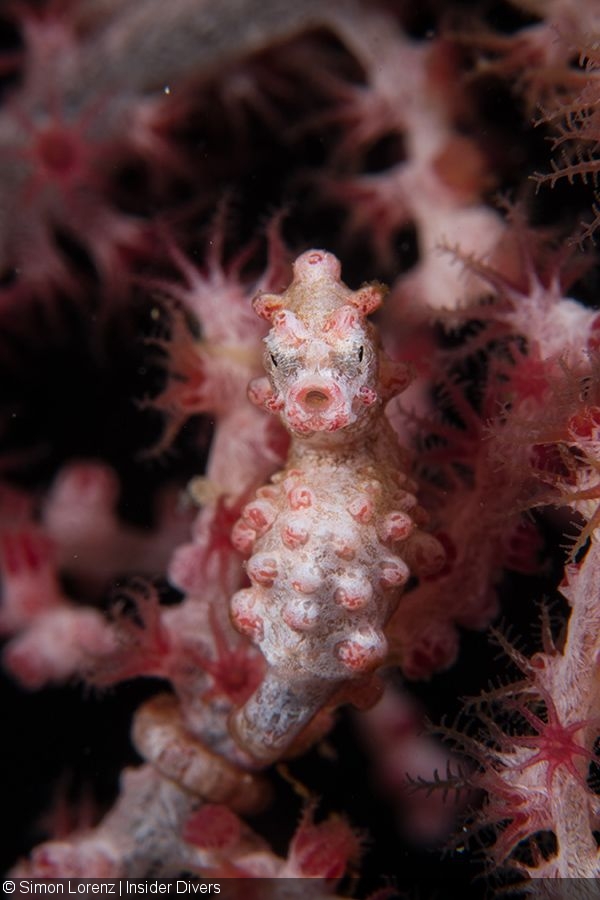 The increased light power from guide number (G.N.) 24 for the Z-240 to 33 for the Z-330 is a major upgrade, but as mentioned, not really key for macro. There might be a minor difference in terms of recycling speed, but macro photographers will likely optimize lighting to their taste and would never approach the maximum output of the strobe.

The improved ergonomics of the Z-330 are a huge step up compared to its predecessor. While the location of the controls hasn’t changed, modifications to the buttons and dials has greatly increased handling underwater. The knobs are much easier to use when adjusting without looking, and I also found the steps between each stop to be smoother and more comfortable to adjust. 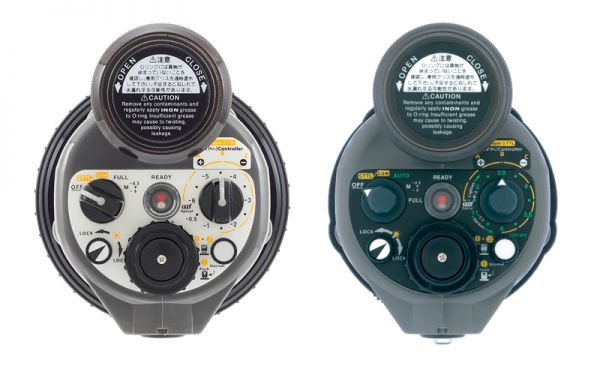 The Z-330 (left) versus the old Z-240: The entire back panel has been simplified, with fewer colors and without unnecessary text. The black print on the white background has also increased legibility (images courtesy of Inon)​

Another small but important change is the manual dial: The flash control now stops at the maximum setting (–0.5) and does not continue rotating as it does on the Z-240. So, in case one is not clear what power has been set, when not looking, just turn the dial to the highest or lowest setting and count the notches to get the desired output.

Also useful is the new ordering on the main mode control, where the end position is now manual (“M”), which most photographers use. The position before is “FULL”—meaning full dump—firing the flash at maximum power. (These positions are switched on the Z-240, making operating controls by touch harder work.) Although full power is rarely necessary for macro, it is still very convenient to be able to quickly set flash power to maximum.

The phosphorescent back panel (image courtesy of Inon)

Unfortunately, the knobs for the focus light and pre-flash remain small and awkwardly positioned—an area I was hoping would also be improved. While adjusting lighting when shooting macro, I would often accidentally push a button, and once the function is selected it can be very fiddly to unlock, even without gloves.

The phosphorescent back panel, however, is a very handy feature for macro. It doesn’t last more than 10 minutess on a night dive, but one quick shine with your torch brings the glow back. Particularly when shooting macro on night dives, this can make life much easier. 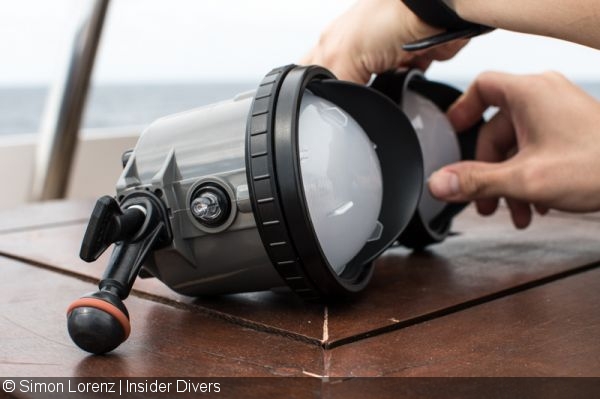 I also noticed the benefits of the new dome-shaped diffuser for macro. While they create a nice soft diffused light, they are also really easy to unlock if you want to switch to non-diffused light. While on the Z-240 a tiny screw was used to fix the diffuser, the Z-330 features a bayonet mount—a quick twist and the diffuser will come off and remain attached to the strobe with the lanyard provided. The bayonet mount may also prove useful for other lighting accessories, and photographers will be looking forward to seeing some cool gadgets from Inon in the future. (Are you listening, Inon?) 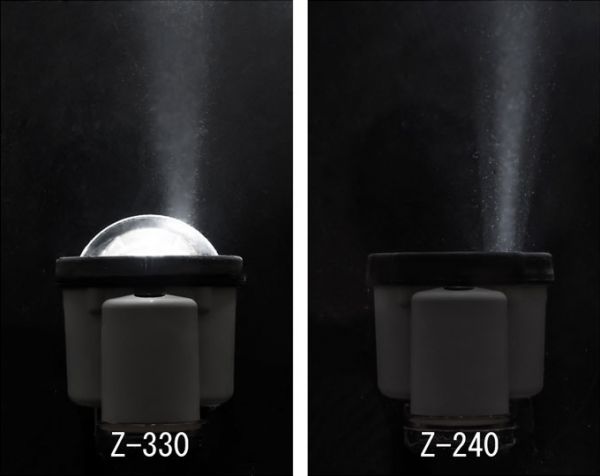 Finally, the new focus light is now a lot more useful for macro photography than it used to be. With the Z-240, the light shone off-center straight through a hole in the diffuser. The new, more powerful focus light shines towards the center thanks to a Fresnel lens design. More crucially, however, it shines through the diffusers, producing a neat light globe. This has the advantage that the strobes do not need to be pointed at the subject. The focus light’s reduced auto-off time when the strobe fires is now also much more usable than previously. Photographers still may not use this as their primary focus light, but it is a good backup.

In my review of the Z-330 for wide-angle subjects, I came to the conclusion that the light shades aren’t very useful. They generally reduced the beam angle, limiting lighting on larger subjects. With a few exceptions involving close-focus wide angle in backscatter-heavy environments, I would not recommend using them for wide-angle photography. 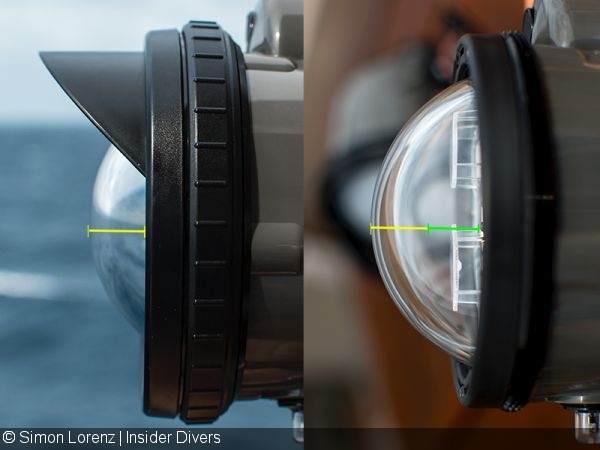 The dome shades reduce the cone of light, and therefore the spread of light 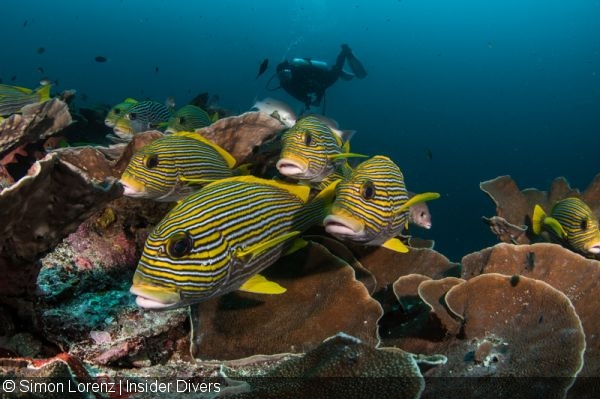 On these recent trips I didn’t use the light shades at all for wide angle, making photography of reef scenes and big schools of fish so much easier

When using a standard setup with slightly inward facing strobes, the light shades can be used to reduce the lighting of backscatter and substrate between subject and lens. Most of the time, I would be shooting with this configuration. When playing with lighting angles of either strobe, however, one does need to keep an eye on the position of the shades, as the subject may suddenly not be lit at all. 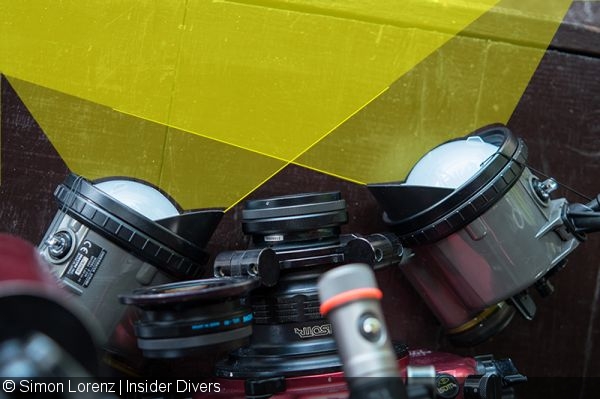 The classic macro light setup, with dome shades blocking the light in front of the subject 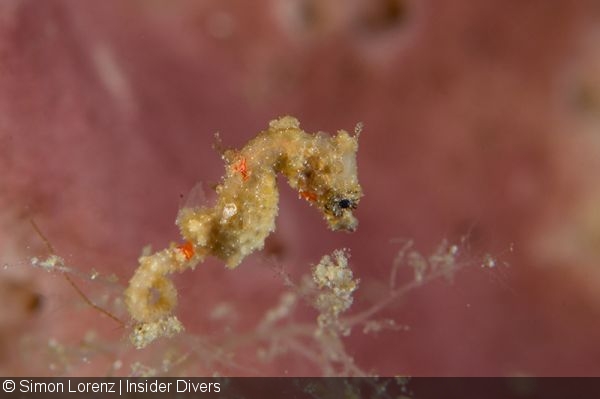 Side lighting for black backgrounds

When lighting subjects from both sides, which is often useful for very small and translucent subjects, there are now two options. The light shades can be used to reduce lighting of particles and seafloor either in front, or behind the subject. The latter makes the creation of images with black backgrounds so much easier, as light will not leak onto the substrate behind the subject. The closer the subject, the further back the strobes need to be. 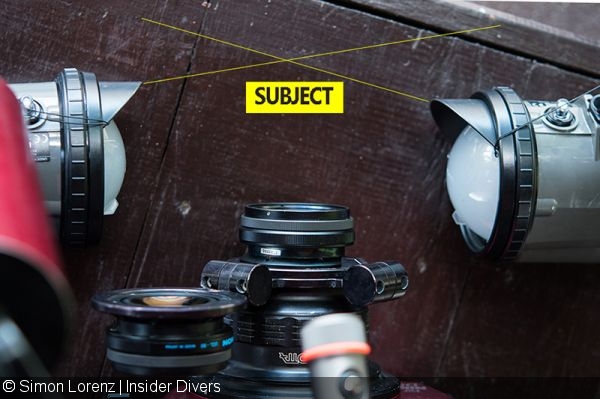 Side lighting with dome shades positioned to avoid lighting background. The strobes can be pulled closer to the camera depending on the distance to the subject 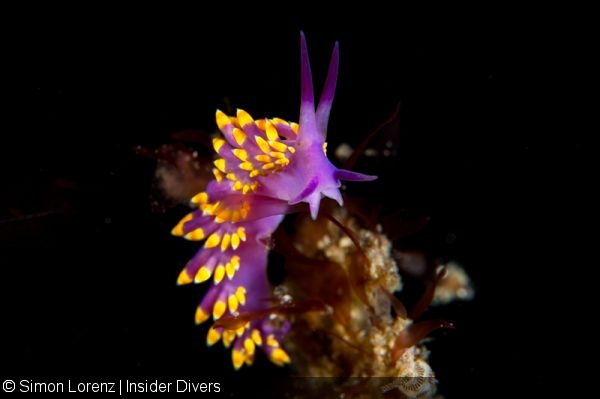 For black water photography, we want to be able to shoot fast and create as little backscatter as possible. The increased power of the Z-330 allows you to shoot at a faster rate than the previous model, as you can power down the strobe a little, and benefit from the slightly faster recycle time.

Here again, the light shades help to reduce backscatter tremendously. Once I decided on my optimum focus distance, I would set the shades to create a perfect triangle, and then just fire away. To make the light beam even more precise, I often chose to remove the diffuser caps. The results were very satisfying, and much improved in terms of reduced backscatter as well bringing out subject detail. Note that if the subject decides to swim towards your focus light and therefore into the shadow of the light shade, the animal will not be lit up at all. 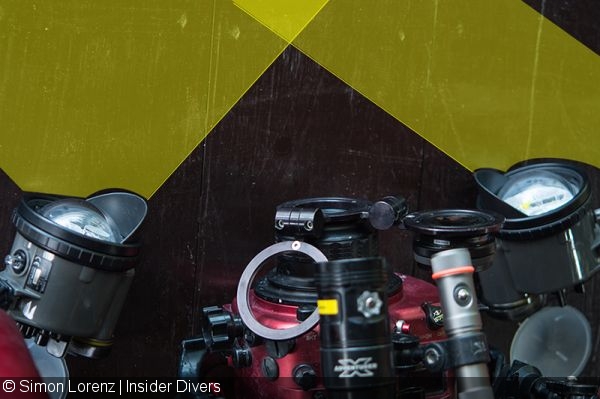 Forward lighting without diffusers and backscatter prevention between camera and subject 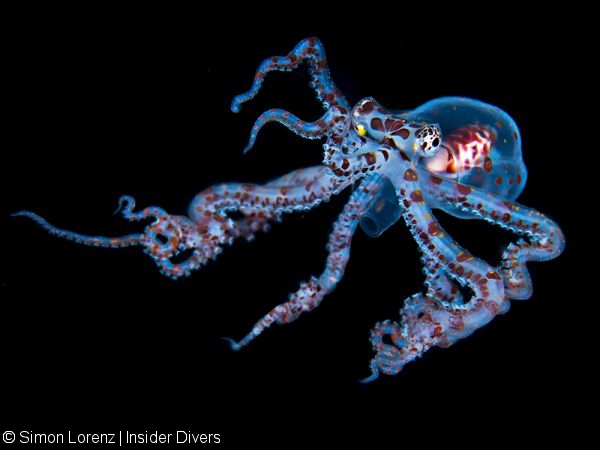 My testing has shown that the Z-330 is easier to use for macro than its predecessor. The light shades are a really nice feature, allowing for convenient macro lighting, while the increased power makes black water photography easier.

While these are great benefits, it would be harder to justify the expense of replacing existing Z-240 strobes, as these features would be in the “nice to have” category. However, upgrading from smaller strobes such as Sea&Sea’s YS series or the Inon S-2000 is highly recommended.

With only limited options on the market for high-quality underwater strobes, the Inon Z-330 is definitely one of the best options out there for both professionals and enthusiasts. 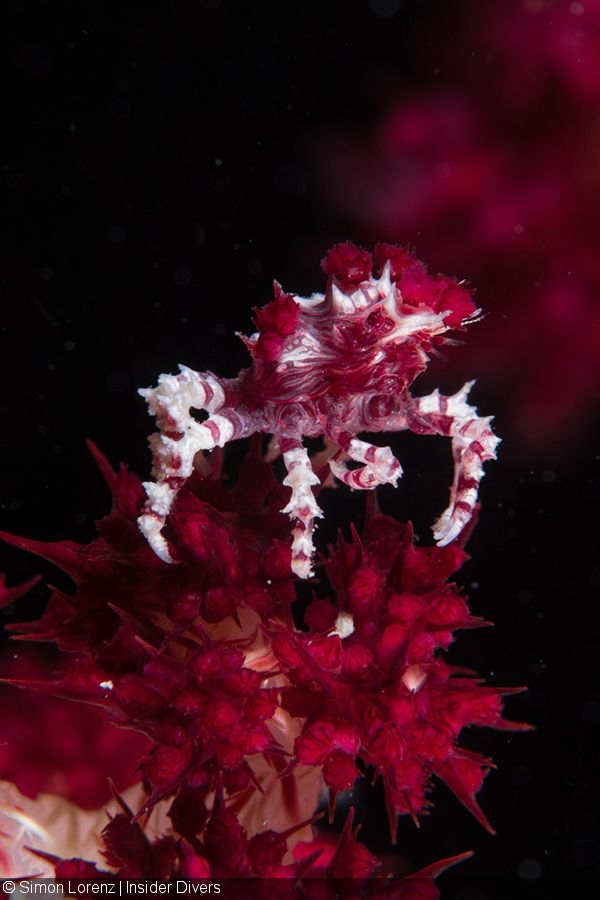 About the Reviewer: Underwater photographer Simon Lorenz is a regular author for dive magazines around the world. With his travel company Insider Divers, he runs guided group trips, combining unusual dive experiences with photo training. As a PADI instructor, his aim is to further the diving and photography skills of his guests. At his home in Hong Kong, he operates Pool Portrait, the first underwater photo studio in the city. As a member of the advisory board of the Hong Kong Shark Foundation, Simon supports efforts to reduce shark fin consumption in China.