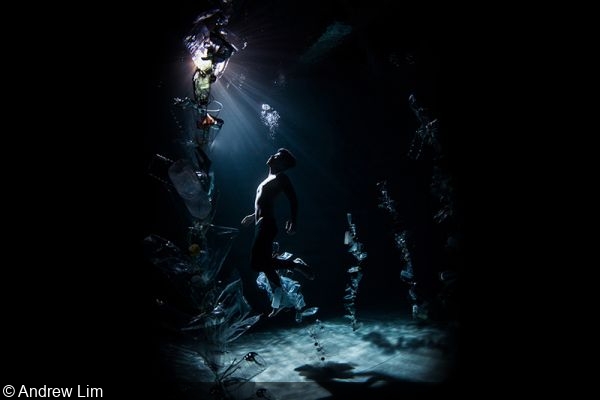 Caught in the plastic ocean

“The Lamest Apocalypse” to me was more than just a set of photos. It was the entire process—from conceptualizing to preparation, and finally shooting. The prep was a big deal. Going around Singapore, reaching my hands into bins and collecting used bottles and cups from the streets was a meaningful and humbling experience. It did come from the heart.

Every step of the way that led to the shoot amplified the reason why I wanted to do this project. Although intangible, the whole team that worked on this with me felt it, and this allowed us to produce what I envisioned.

This project was born out of my desire to build a bridge that connects how the fate of the oceans could eventually lead to possibly the death of mankind, rather than the common depictions of marine life being destroyed by plastic pollution.

The Story Behind the Symbols

Syrena, Singapore’s first mermaid, represents marine life being tangled, suffocated, and killed by a plastic ocean—again, an image we commonly associate with plastic pollution. So, I put Benjamin Kheng, a personality we all so love, to represent mankind right next to her. Now we had different subjects but the same environment, the same fate. I wanted to capture the struggle and finally the end of both “species.”

​The “plastic ocean” was created by stringing single-use plastic waste items together to form “plastic kelp.” The plastic trash included bottles, bags, bubble teacups, and containers. It was a really interesting experience reaching into trash bins to collect rubbish while onlookers stared at me weirdly.

But it was worth the effort, as I hope that my approach will prove to be more effective in raising awareness, namely that it is not just our beautiful marine life that is dying from plastic pollution but us too. The time has come: The harm we’ve done to our environment is indeed coming to bite us back. Simple practices to cut down on single-use plastics on an everyday basis would go a long way, and as Singaporeans, we have quite a lot to catch-up on improving said practices.

If we continue doing what we do, we are headed for the lamest apocalypse. It won’t be something cool like a zombie apocalypse, or something tragic like World War III, that kills us. Instead, we are going to die from bubble-tea cups and plastic bottles. 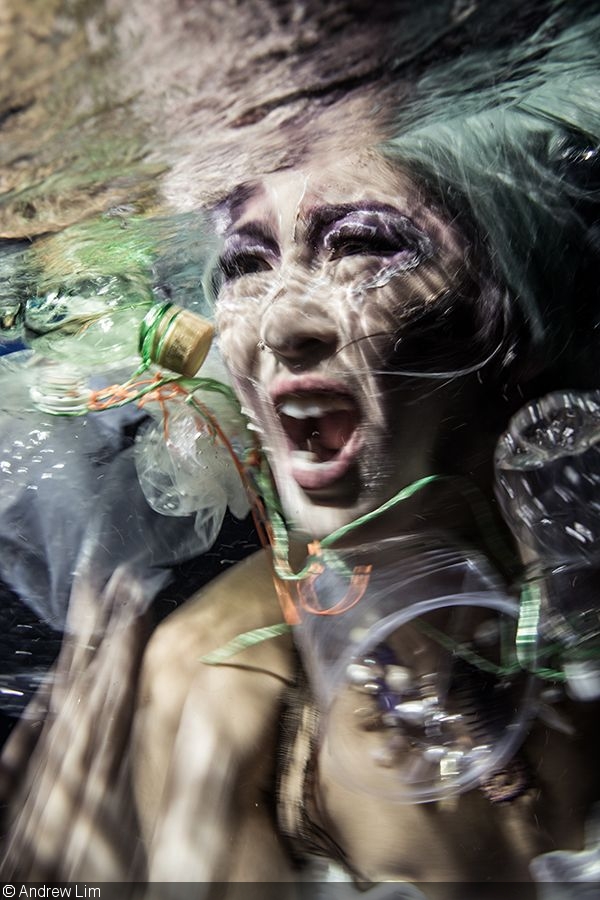 The face of the voiceless

An Honest Look at Who I Am

I wish I could tell you that I’m a “real” hipster photographer who started my career shooting strangers in the streets with my grandfather’s old film camera that I found in the basement. Unfortunately, this isn’t the case at all. My first foray into serious photography began with arguably the most difficult form of the art—underwater photography.

Since the age of two, I have been fascinated by marine life, perhaps due to the exposure my parents gave me (I started snorkeling at two as well). I got my diving license at 13 and started shooting underwater at 17. This happened after I went on a diving trip with a family friend and underwater photographer extraordinaire William Tan—seeing how he took photos and the photos he took blew me away.

I published my first underwater photography book, Silhouette of Serenity, at age 21. No, I’m not a prodigy; in fact, I was a nobody, and my photos were by no means top class. However, I wanted to do something for the less fortunate and so I published my book and donated part of the proceeds to help children whose parents were in prison.

It seems like a pretty random organization to donate to, but it’s because these children would never have the opportunities that I had as a kid and I believe exposure at a young age really influences how one will turn out to be. Look at me. Because of that, I was invited to have tea with the (then) president of Singapore, Dr. Tony Tan, in recognition of my work, and was also invited to speak on platforms such as TEDx.

Serious “topside” photography came in quite a bit later. Unlike many professional (and older) underwater photographers out there who have their lives pretty made already, I was fresh out of school and discovered that shooting fish didn’t pay very well. What’s more, it was difficult to get more time shooting underwater as dive trips are expensive! So I started doing photography on land to earn a living. 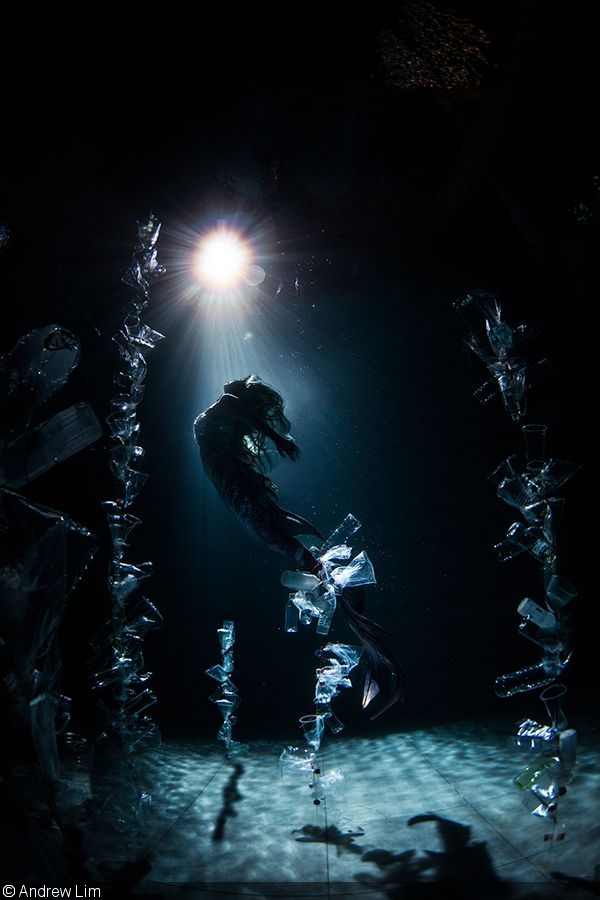 The plastic ocean, an environment we created

The transition was easy. I could direct my subjects, lighting became (very) controlled, and I didn’t even have to time when I had to take a breath of air! Perhaps the closest thing to underwater photography on land is if you shoot children’s events. Yep, same rules apply as when shooting underwater.

The best thing about going into studio photography was that it improved my lighting techniques. This opened a whole new perspective for me when it came to playing with my strobes underwater.

Working with models on land is a super clinical process. You have full control over everything. If you’re a control freak, you’d much appreciate this. Shooting fashion underwater, however, is a whole other story. Hair and clothes get everywhere, models suddenly do not know how to model, makeup can become a nightmare, and if you’re shooting in the ocean, there’s always a concern for safety and currents.

What I pride myself most on in shooting people underwater is honestly not my photography—I mean, it’s just pointing and shooting after you get your settings right, right?—but how I prepare my clients and make them feel as comfortable as possible underwater. That is when they look their natural best. Unlike fish, people have their “best angles,” and they’ll judge your level of skill not based on how good a photo is, but how good they look. That is the truth. 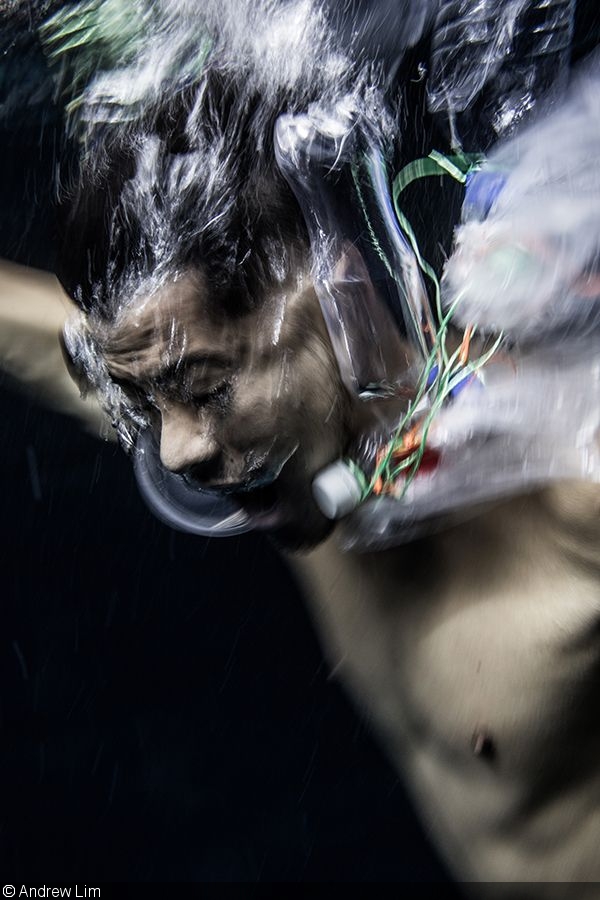 This was honestly my first time shooting action shots underwater. Apart from spreading a good message, I wanted to use this project to push my boundaries and do something I’ve never done before. For the profiles, I wanted to capture “struggle.” I knew it had to be dynamic, and that’s why I used motion-blur to bring out the feel.

To achieve a good motion-blur image, it’s often best to have a quick flash from the strobe (this locks in the main subject for your image) while panning the camera to the motion with a dimmer ambient light on slower shutter speeds (to have that “dragged” effect).

For this shoot, I only wanted to rely on one light source. It was a lot more difficult. Reflecting, I realize I give myself stupid challenges to make my life harder, and I don’t know why! I used an ARRI M18 video light and fired it from above the pool at a 45-degree angle. I did that as I wanted to create a semi-silhouette effect with my subjects.

My thought process is very simple: If you want to create images that are different from everyone else’s, you have to do something different from them! It’s refreshing to take off the strobes every now and then, and play with alternative light sources. Just one thing to note, if you want to play with external lights at night, make sure they are strong enough. 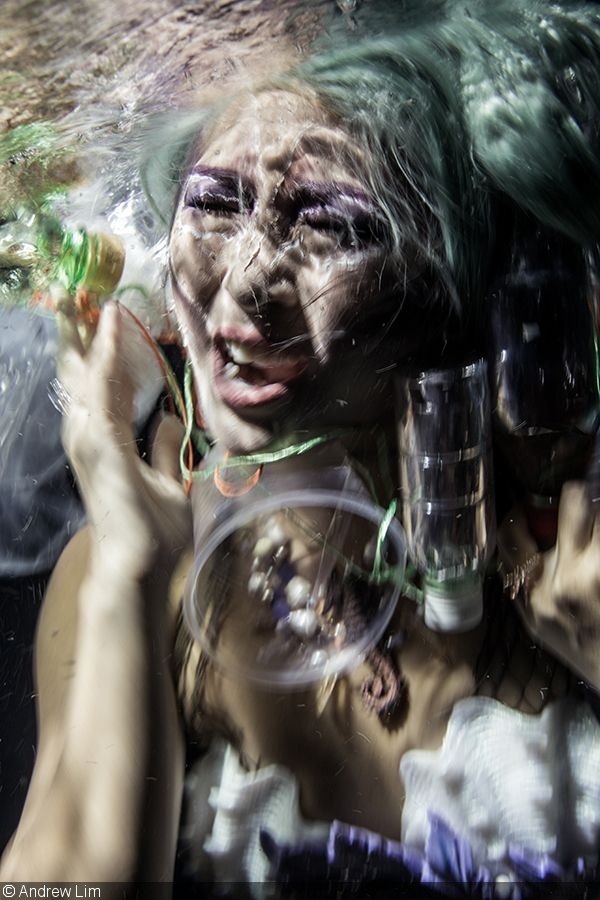 What’s Next for This Project and Me

It was nice to see some local media covering “The Lamest Apocalypse,” as I want this message to reach mainstream media, where not just environmentally conscious divers see it. I hope that featuring it here on DPG will encourage more people in our circle to do more to reach out and educate non-divers.

My business, Drewperspectives, has actually done a shoot for shark conservation. I flew my team and two Singaporean celebrities to Bali, where we shot a set of photos and a video to raise awareness about how destructive the wedding industry in Asia is to shark populations. Unfortunately, I have not yet published it as I haven’t found the right media platform to do so. (So if any of you readers are keen, do let me know!)

For everyone reading this who has a crazy idea, I say, “Do it!” Photographers are artists, and I know how difficult it can be to put yourself out there. Thoughts like “I’m not good enough,” “There are so many better ones out there” fill our heads whenever we want to do something. And yes, if it’s something you’re planning to do to boost your ego or show-off your photography prowess, good—continue thinking that way because you have to make sure your work is top-notch.

However, if you’re doing something that comes from the heart, something you’re passionate about, or something you feel has a meaningful message that will positively impact both people and/or the wonderful nature around us, just go ahead and do it. No one should fault you for trying to do something good in this world. 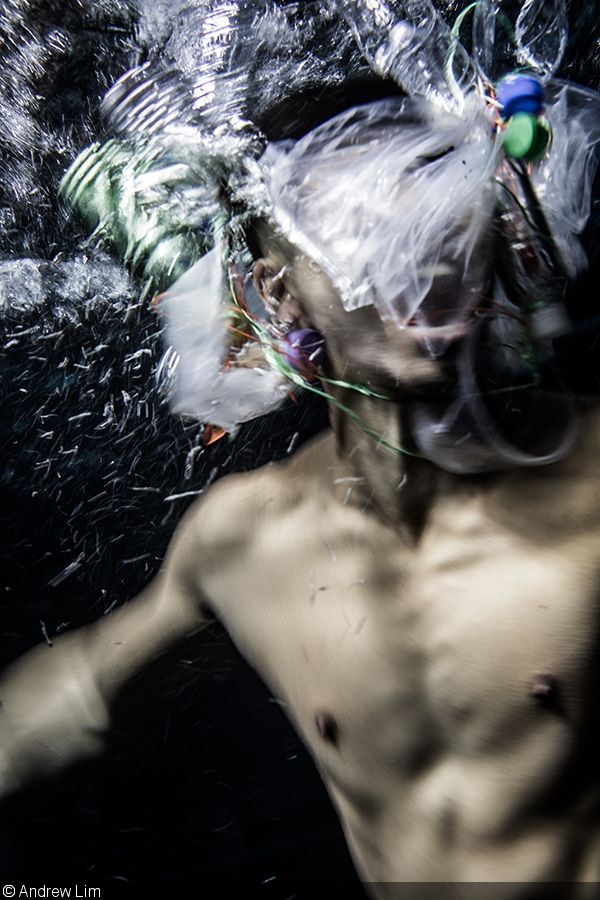 The Lamest Apocalypse is coming

About My Team: I’ve been very blessed to be surrounded by very good-hearted people and because of that, I’ve found it easy to quickly gather a team of passionate individuals who will come together and work on projects with me for a good cause. And that is why I continue to do what I do.

These shots were taken at the beautiful NCO Club @ JW Marriott, and I would like to thank them for lending their support to this good cause. I'd also like to thank Scuba People who played an integral role in ensuring the safety of our talents, and to Victoria Sim for again being part of another project of mine and making such an amazing behind-the-scenes video.

My two amazing talents, Syrena and Benjamin Kheng, thank you for being so patient with me and being so passionate in wanting to spread this message, my makeup artist Dominique Andrea, and last but not least, the crew—Jared Lo, Josh Chou, Zakir Hamid, Joseph Arison, and Lu Shi Hui—without whom I couldn't have done this.