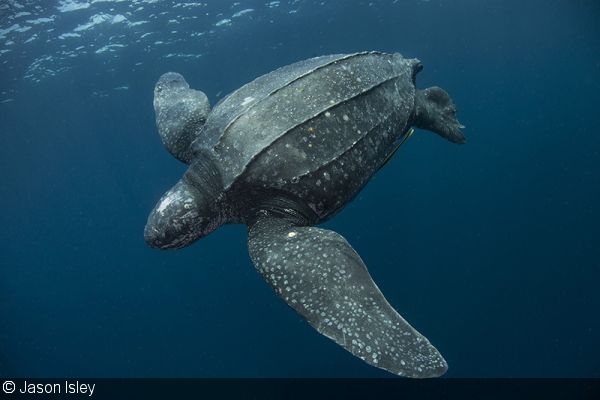 After traveling thousands of miles across the Pacific, some of the only surviving leatherback turtles gather in a remote string of islands halfway between Australia and Indonesia to gorge on jellyfish

Far out in the southeastern part of the Banda Sea sits a scattering of 47 small islands. This is one of the most remote places anywhere on Earth that lies within the borders of a developed country, in this case, Indonesia. Here, in the province of Southeast Maluku, is a relatively forgotten backwater where 150,000 people struggle to survive on poor agriculture and subsistence fishing.

This is the Kei Archipelago. Deep water separates these islands from both the Asian continental shelf to the north and the Australian counterpart in the south; they are geographically isolated. Once they were famous around the world as the Moluccas, and it was these islands that Christopher Columbus set out to find. These were the highly prized Spice Islands, the only source for the global supply of nutmeg and cloves for much of the last millennium.

These days, the trade galleons are long gone, but there is still one group of regular visitors from afar. Each year these travelers leave the American west coast and begin an epic voyage to the opposite side of the Pacific Ocean. These individuals don’t do this in the cramped comfort of an airplane; they swim. The travelers are leatherback turtles—and they are critically endangered. 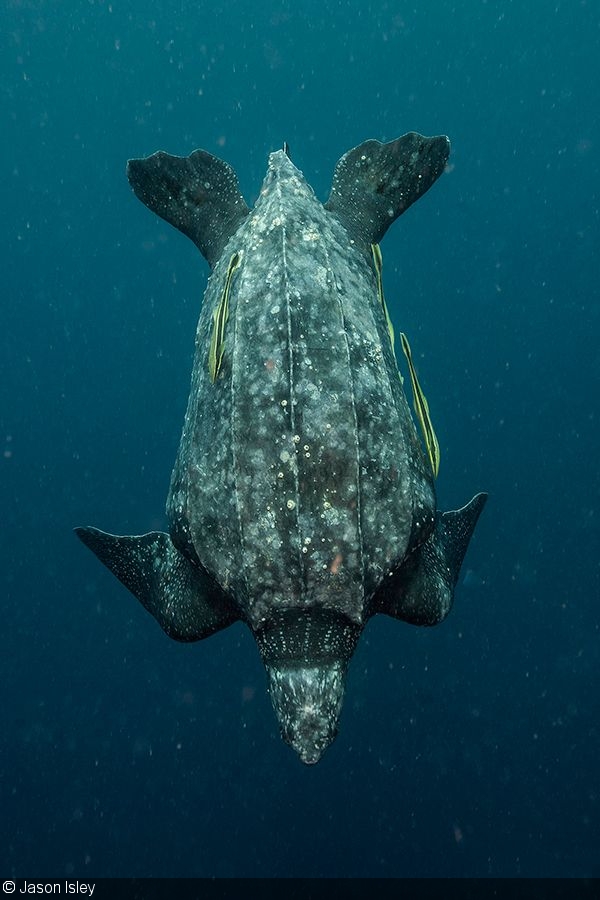 The turtles come to the Kei Islands to feed after a journey of over 6,200 miles

The leatherback is the largest of the seven species of sea turtles and the only one not to have a bony shell—its carapace is covered with skin and oily flesh. It is also the only extant species in the genus Dermochelys and family Dermochelyidae. All other leathery turtles have long since withered on the evolutionary tree of life.

These remarkable animals make the journey across the Pacific, but they can be found in the Atlantic as well. The Atlantic subpopulation is thought to number as many as 30,000, nesting mainly in West Africa with some on the Caribbean coast of Costa Rica. They range from as far north as Newfoundland down to Patagonia and the Cape of Good Hope.

The Pacific subpopulation, however, has not fared as well. They form two distinct groups: one nesting in Papua, Indonesia and the Solomon Islands and ranging from British Columbia down the coast of America to California; and the other further to the south and nesting along the Pacific coast of Central America. The combined populations of the Pacific leatherbacks are feared to be less than 2,500, making them the most endangered marine turtle subpopulation. Two other subpopulations—in the South China Sea and the Indian Ocean—are effectively extinct, eradicated by humans harvesting their eggs from beaches. 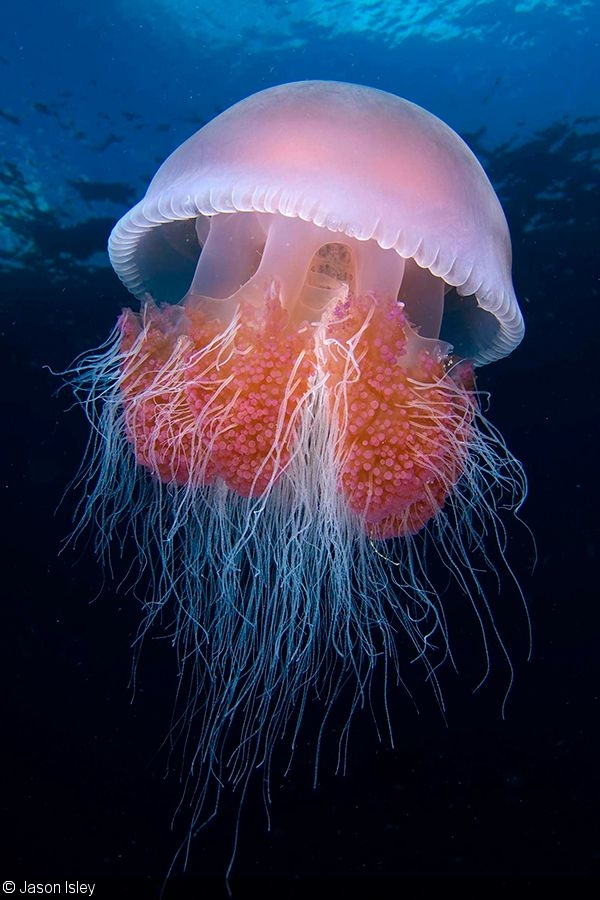 Each year, masses of pelagic jellyfish descend on the island, swept in by currents from the vast expanses of the surrounding open ocean. This is a veritable feast for the leatherbacks as they feed nearly exclusively on jellyfish. This underwater buffet brings in these incredibly rare animals and makes the Kei Islands one of the few reliable places, if not the only reliable place, to encounter Pacific leatherbacks underwater. That is what attracted me here to film them in 2007, and what has kept me coming back.

Very little is known about the leatherback other than their egg-laying behavior, the immense journeys they take to reach nesting beaches, and their voracious appetite for jellyfish. The jellyfish that attract them to Kei stay deep during the day, and they only surface during the night—that is when the leatherbacks gorge themselves on as many as possible. During the day, the turtles are seen resting on the surface, heating their bodies in the sun. This makes them easy prey for fishermen.

There is a local tradition of hunting these gentle giants, and I wanted to document this. Eight villages in the islands still take part in the traditional hunting of leatherbacks under a local adat, or law. The killing of the turtles can only be for subsistence, and the law forbids any trading or selling of the meat. Due to population growth and loss of forest resources such as deer, pigs and birds, the hunting continues and up to 200 turtles can be harvested each year. This may not have affected the overall population of the turtles in the past, but today it means that nearly 10 percent of the subspecies’ total population is being destroyed each year—an unsustainable cull. 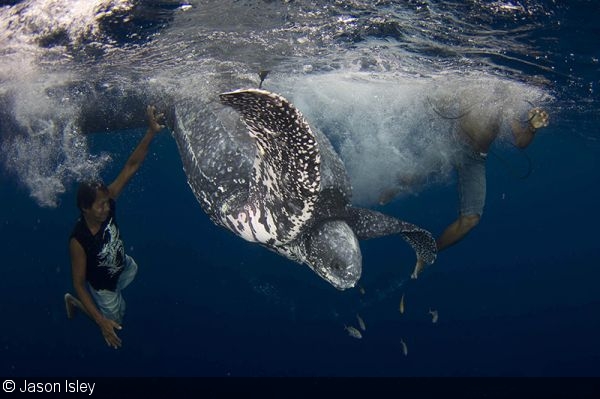 A local law permits the killing of leatherbacks for subsistence 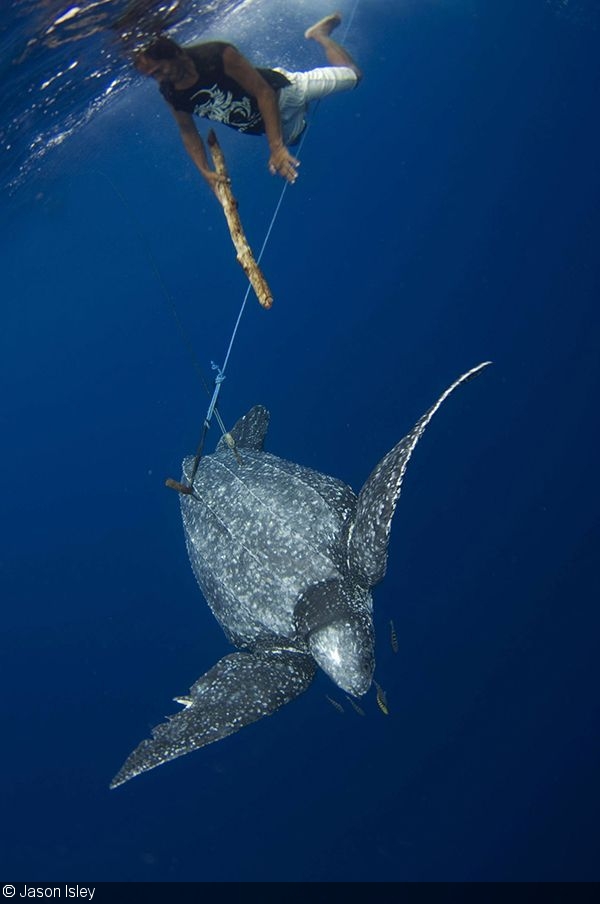 A fisherman harpoons a leatherback near the surface 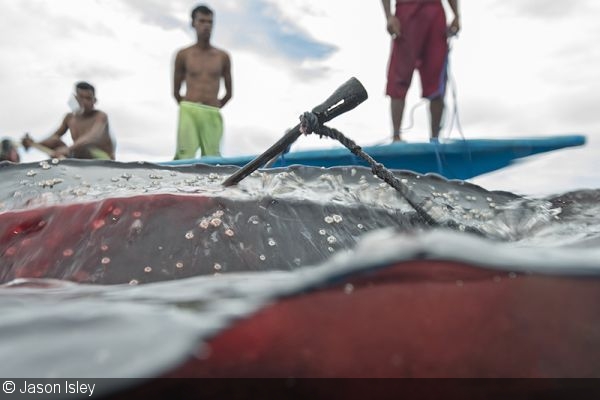 As many as 200 turtles may be taken every year 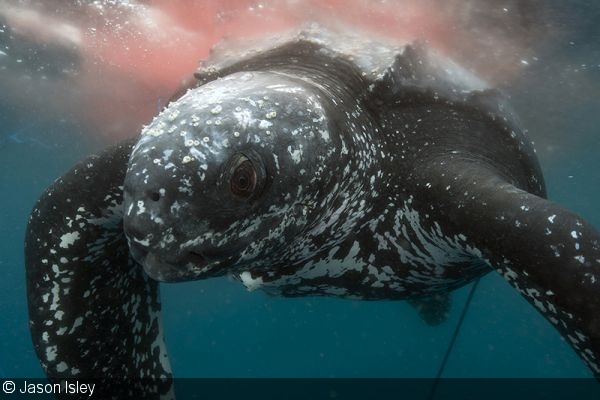 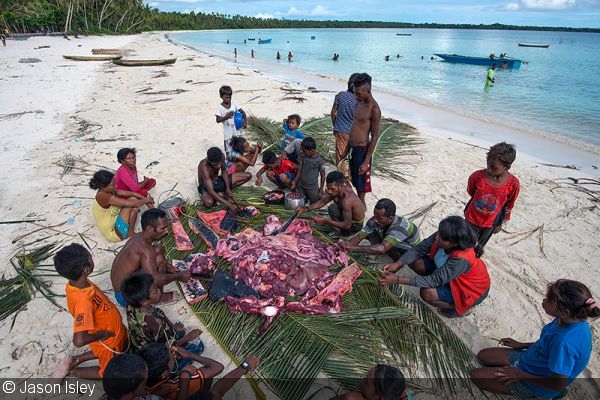 On that first trip, we began our search for the turtles by looking for their food, the jellyfish. I had seen occasional swarms during the day relatively near the surface. I also noticed, from my experience and research, that the leatherbacks are covered in barnacles and occasionally algae, so it seemed fair to deduce that they might—as other pelagic wanderers such as manta rays take such pleasure in doing—visit cleaning stations.

So, I decided to explore the seamounts dotted around the area. The bay is surrounded by deep water, 650-foot-deep trenches bringing the uprising tides and along with them the jellyfish. I located a few seamounts on the charts and started my research into what else the leatherbacks get up to during the day. I managed a dive on most of the seamounts and one, in particular, stood out, covered in anchovy and lots of marine life. 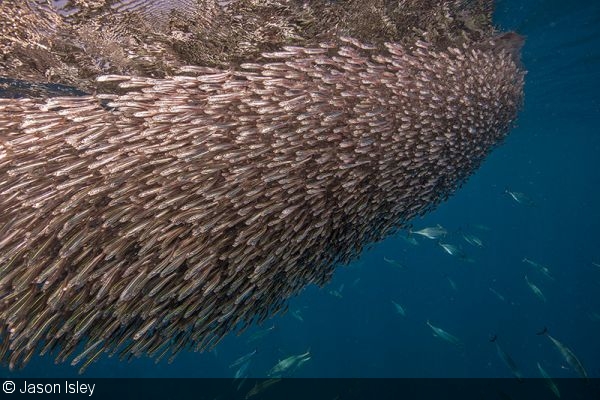 While looking for turtles, we had some great baitball action 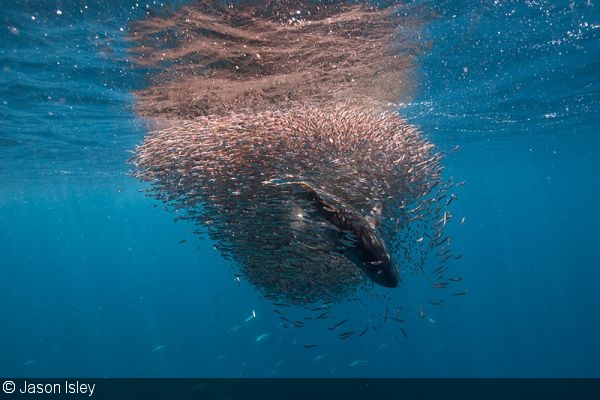 The anchovy were fair game for seabirds, giant trevally, bonito, blacktips, and more

During my next trip, we sighted a mass of seabirds diving in the distance, indicating a baitball near the surface. We raced over to the location and jumped in on the action. Oceanic blacktip sharks, giant trevally and bonito were all smashing into the swirling anchovy. The sharks didn’t stick around, but the bonito continued to attack even in our presence. It wasn’t until I looked down towards the seabed that I realized we were over the top of the seamount I had explored the previous year. Once we had finished shooting the baitball and had taken a break for lunch, I decided to dive on the seamount and see precisely what was happening down below.

It was broad, well over a mile long, and so we chose the shallowest part, which was at 72 feet deep, and descended to the bottom. It certainly wasn’t the healthiest reef I have ever encountered. It was a pretty flat area with coral heads rising up and creating shelter for moray eels and smaller reef fish. 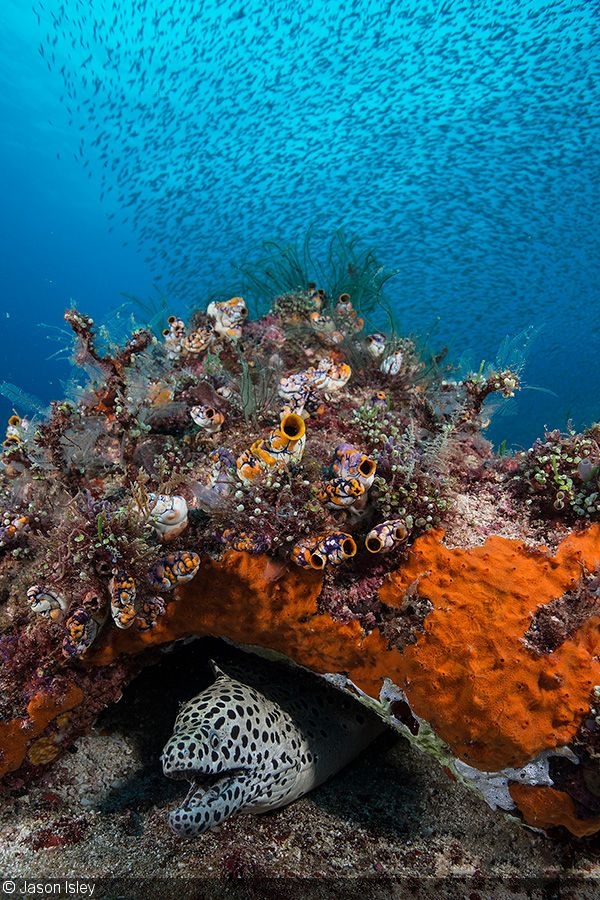 The seamount we found was excellent for wide-angle photos 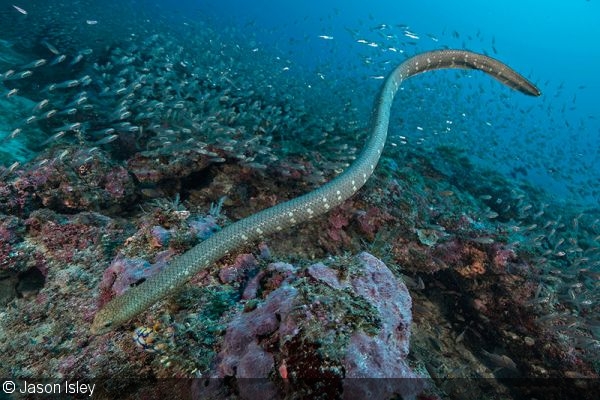 A few larger areas were covered in glassfish and formed a large cleaning station, but most of the surrounding area sloped down into a barren sandy area. This is where the massive numbers of anchovy were hanging out—protection in numbers.

The enormous cloud of fish would swarm over the reef at speed, and it became clear why they were moving so fast: We immediately encountered a massive school of jacks, then barracuda, and then above was a large school of bonito. They were all there for the anchovy, and they weren’t the only ones—a smaller school of Spanish mackerel came past and then surgeonfish and gold-spotted trevally. All these predators were there for the anchovy. On the seabed, we came across a reticulated stingray and many olive sea snakes cruising around. One small coral head had looked like a haven for some of the anchovy, but they were getting hammered by grouper and a school of yellow snapper. 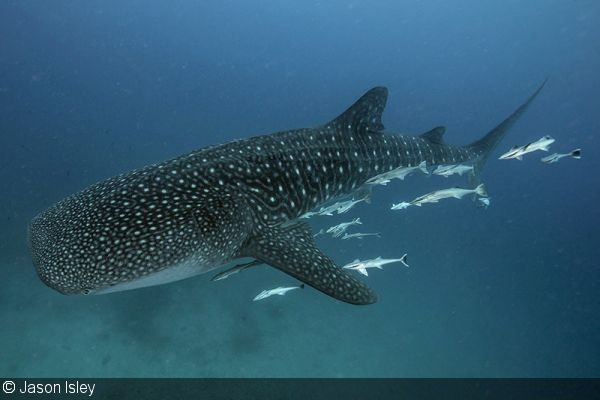 Leatherbacks aren't the only big animals that come here to feed 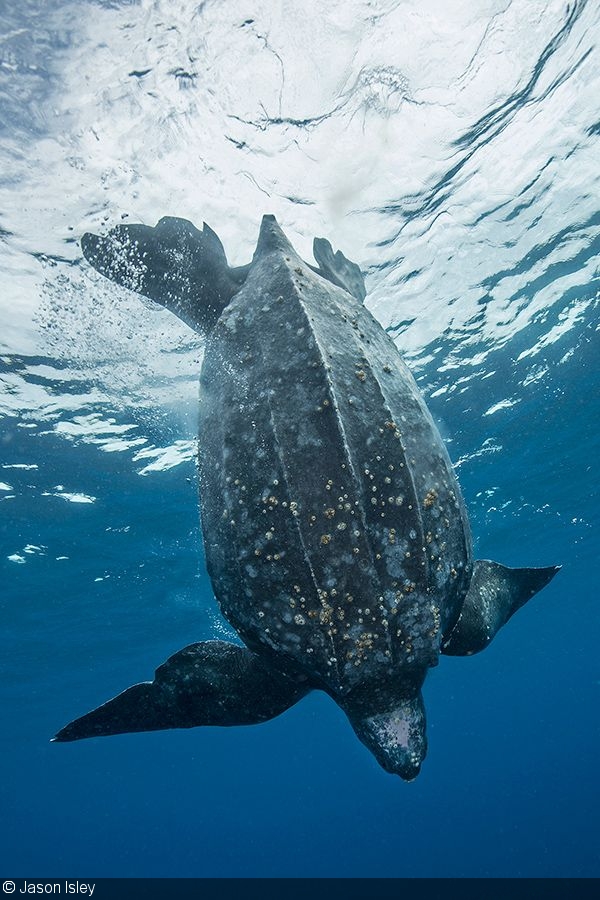 As we ascended to the anchor line, we were then buzzed by an oceanic blacktip shark. As it disappeared, another shadow appeared from below, and a small whale shark came to check us out. After a few pictures, it continued its search for the anchovy. Back on the boat, we tried to comprehend what we had just discovered, but had very little time as another baitball kicked off in the distance.

Over the next two weeks, we split our days between searching for leatherback turtles in the morning and diving the seamount in the afternoon. We had leatherback sightings every day, but none, so far, at a cleaning station, or of them eating the sporadic daytime jellies. We also did a lot of night dives in black water, which revealed some fantastic critters and what we had already expected—thousands and thousands of jellyfish cruising near the surface. 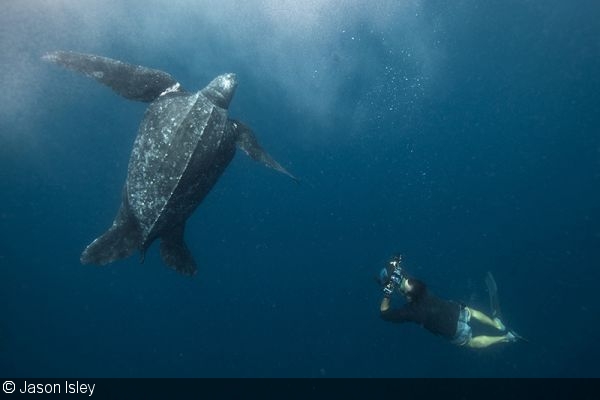 Getting up close and personal with one of these giants

Plans for this year are already in place, and I’m determined to capture an image of a leatherback turtle feeding or maybe even being cleaned. If you are interested in joining us on these expeditions to see these incredibly rare animals, you can contact me at jason@scubazoo.com. We will be running two trips: November 12–18 and November 19–26, 2019.

About Jason Isley: Jason trained as an underwater cameraman in Australia before moving to Sabah in Malaysian Borneo to cofound noted underwater filming and photography company Scubazoo. For 10 years from 1996 Jason filmed all over the world on productions including the Disney IMAX production “Sacred Planet,” “Journeys of a Lifetime” with Minnie Driver, Nick Baker’s “Weird Creatures” for National Geographic Channel, “Perfect Predators” for Discovery Channel’s Shark Week and the BBC’s Emmy Award-winning “Life” series. From 2006, he focused on photography full-time, becoming the driving force behind Scubazoo’s publications division. He was pivotal in the production of their first book “Sipadan, Mabul, Kapalai: Sabah’s Underwater Treasure,” and then managed the publication of six more coffee-table books for Scubazoo including the quirky “Small Blue World.” He is constantly in the field shooting for Scubazoo’s book projects and also behind-the-scene shots for large productions such as the recent BBC “Blue Planet II” series. Having an in-depth understanding of the underwater realm, Jason has always managed to capture great behavior shots, but it has been his recent project with miniature people that has really stood out. He has used these miniature images and his passion for marine conservation to connect people with the underwater world in weird and wonderful ways. www.scubazoo.com

Romain Pateau wrote:
I love all these pictures!

Solange Espinay wrote:
Yo! Thanks for sharing that dude that's awesome
You must be logged in to comment.
Support Our Sponsors
Advertise With Us
Newsletter
Travel with us