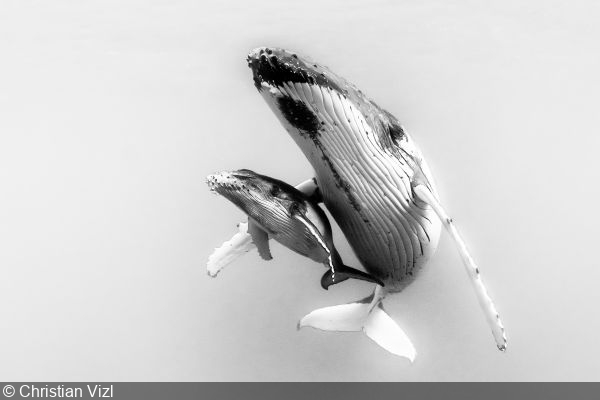 A humpback whale and her calf swimming near the surface, Moorea, French Polynesia

Black and white underwater photography requires a special understanding of light, shadow and post-processing to create truly outstanding images, and nobody does it better than Christian Vizl. His distinctive style and artistic interpretation of the underwater world is easily recognizable, and he has effortlessly followed in the footsteps of one of his mentors, Ernie Brooks, to become the new monochrome master of the underwater photography scene.

Besides interacting with marine life and capturing artistic black and white images, Christian is extremely passionate about marine conservation and uses his profile and work to highlight important conservation issues. His goal is to change the way people perceive the underwater world and the animals that live there, and to encourage them to take action.

In 2019, he published his first book, Silent Kingdom: A World Beneath the Waves, a collection of his finest black and white underwater photography that received glowing reviews for its high quality content. He has won dozens of international awards including Wildlife Photographer of the Year, and is regularly published in dive magazines and other media outlets. Christian has also been a regular contributor to DPG over the years, so we were thrilled when he agreed to answer some questions about his career and showcase more of his favorite black and white images. 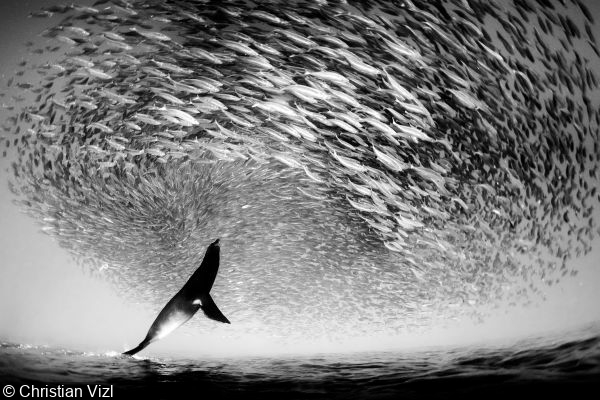 A sea lion hunting a school of mackerel some 40 miles off the coast of San Carlos, Bahia Magdalena, Mexico

Being a scuba instructor since 1997, I never held a camera underwater until around 2008. During a dive trip in Belize, a good friend of mine and excellent videographer passed me his camera and swam away. I thought he would soon be back to get it, but he took his time, so I turned it on and started taking some videos. The sensation of having a camera underwater and being able to capture some scenes of the animals that I have loved so much since I was a kid felt amazing! So right there, at that moment, I decided I wanted to have an underwater camera, but to take pictures, because I have always enjoyed photography and was an amateur land photographer myself as a teenager.  I finally realized that dream in 2010 when I got my first camera and an Aquatica housing. 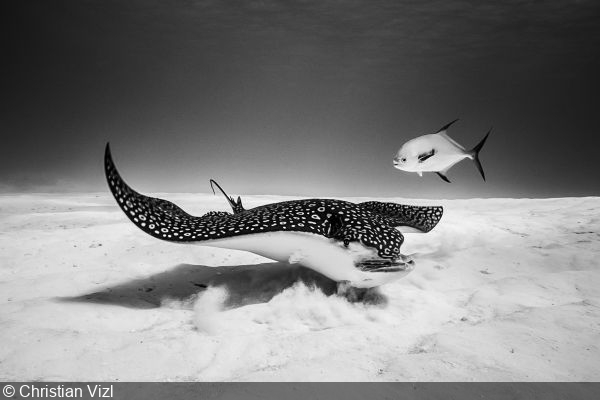 A spotted eagle ray swimming with a fish in a sandy area near the reef, Cozumel, Quintana Roo, Mexico

I love visiting the Revillagigedo Islands [in Mexico], because you have almost guaranteed sightings of some of the most spectacular marine animals in the world, such as giant mantas, hammerheads, tigers, blacktips, whitetips, silkies and other sharks, dolphins, whales, whale sharks, and many different species of fish. The best part is that all the Islands are fully protected from any commercial or individual fishing. 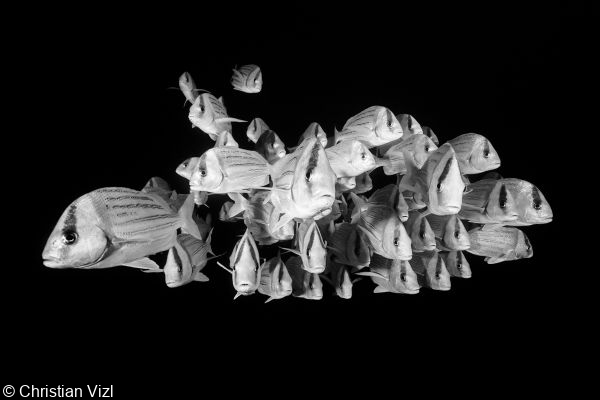 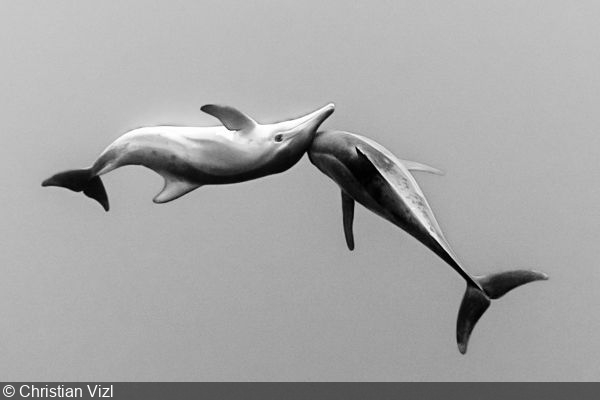 Two dolphins showing love and tenderness towards each other, Moorea, French Polynesia

DPG: Wide-angle or macro? What type of diving and photography excites you most?

I love both wide-angle and macro dives. I find all the amazing variety of marine animals very exciting and interesting, from the tiniest creatures to the majestic whales and sharks. But for photography, I enjoy taking wide-angle shots more.

DPG: What was your most memorable underwater encounter?

There have been so many! But to name one, it was during a visit to the sea lions in La Paz, where usually there are many people during any given day, but on a particularly beautiful afternoon, I decided to stay after everybody else was gone. The sea was very calm and I stayed in one spot where a big male was hanging out. After some time, he noticed me and started to swim in circles around me, first at some distance but since I was not moving, he started to swim closer and closer, in an ever-calmer way, until after about 15 minutes he ended up just a few inches away from me and was so relaxed that he started to close his eyes right in front of me! He only interrupted his naps to take his nose out of the water to take another breath, and went back to napping again. I felt so honored because he was the one who decided to stay with me and in such close proximity and for a very long time. In fact, I was the one who left because I needed to go back to port! 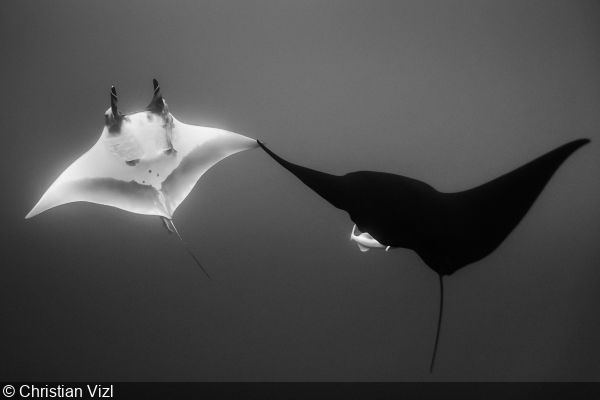 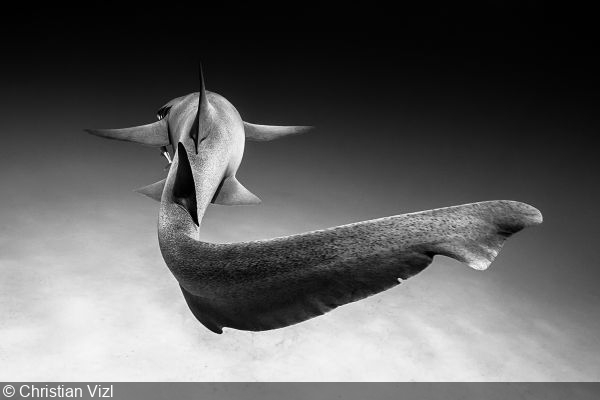 A nurse shark with remoras swimming in midwater, Bimini, Bahamas

DPG: You are well known for your black and white images, and your book, Silent Kingdom: A World Beneath the Waves. What special approach is needed to take images like this?

Photography is all about light, and in my opinion, it is the single most important aspect when it comes to creating appealing, inspiring and touching images. Beyond technical issues, what’s most important is how I apply and manipulate the light that’s available in order to create pictures with dramatic effect, carrying depths of emotion, and using contrast and tonalities as a means to emphasize form and structure of the scene. I focus on the emotional impact of the final shot that will connect on a deeper level with the people that view these photographs. Just as a poet uses words to create poetry, a photographer uses light to create images. So, when I’m underwater taking pictures, one of my goals is to create poetic images through the use of light, trying to capture the beauty of the animal that I’m fortunate to have in front of my lens.

I think one of the key elements in having success in contests is to do your homework on what kind of images were awarded on previous years of that particular competition you are aiming to enter. Each contest has its unique interest and focus on a particular style of images to be awarded, so it’s important to make sure to select images in your portfolio that will resonate with that contest. Also, look for the ones that you believe to be your most original pictures, the ones that stand out from the majority, the ones that portray a unique moment or subject. It is difficult to get awarded for an image that looks very similar to hundreds of others. 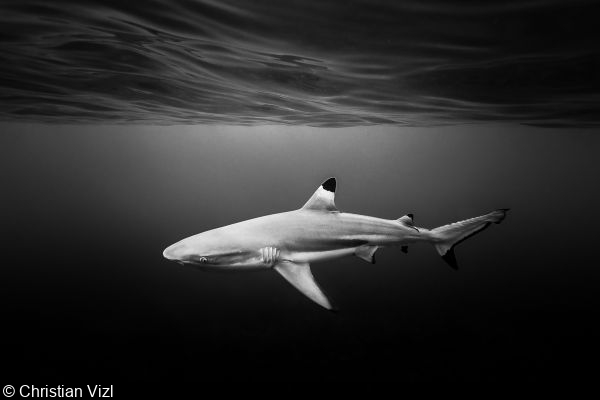 A blacktip shark swimming near the surface, Moorea, French Polynesia 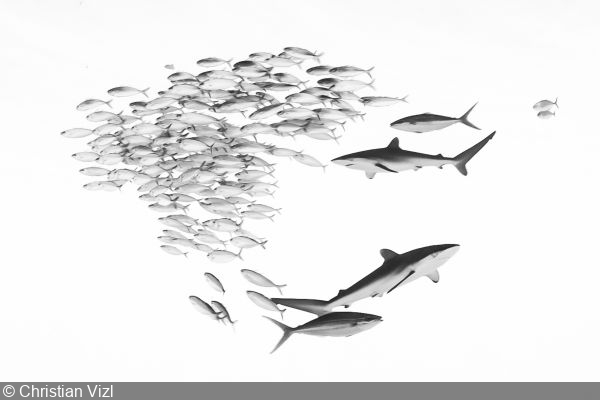 DPG: I know that conservation is an important subject for you. How do you think underwater photography can help contribute to the ongoing efforts to protect our oceans and marine life?

Yes! Conservation is at the very heart and intention of all of my work. Today, the world’s oceans are in grave danger. Overfishing, pollution, plastics, radiation, climate change, acidification and other human pressures threaten the fundamental nature of the ocean, and its animals are being pushed to near extinction. The time to act and reverse our negative impact is now, before it’s too late, as we risk losing everything. So, the higher purpose of my images is to be a voice of the ocean and for the ocean, hoping that people can get a glimpse of what the animals that live there really are: beautiful, sentient individuals, with feelings and different personalities, with complex behaviors and interesting lives that science is only starting to understand.

I believe photography is capable of being a real service to humanity, promoting empathy and initiating change. Images carry the power to change our perception and spark the love and empathy that we all have inside. If we want to have a future on this planet, we need to understand that our lives are interconnected to all living animals, and our own well-being is directly linked to the well-being of these animals. As Dr. Sylvia Earl has stated, “No blue, no green. If the oceans die, we die.” 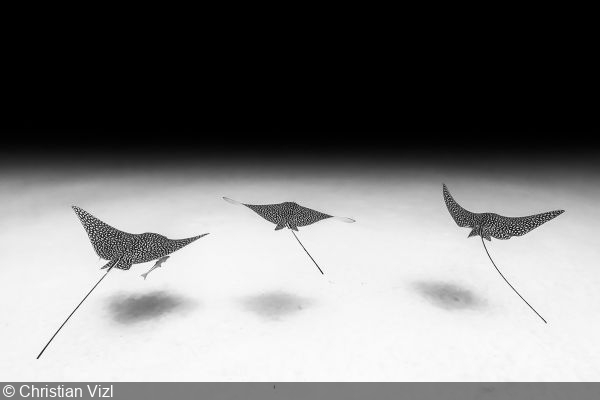 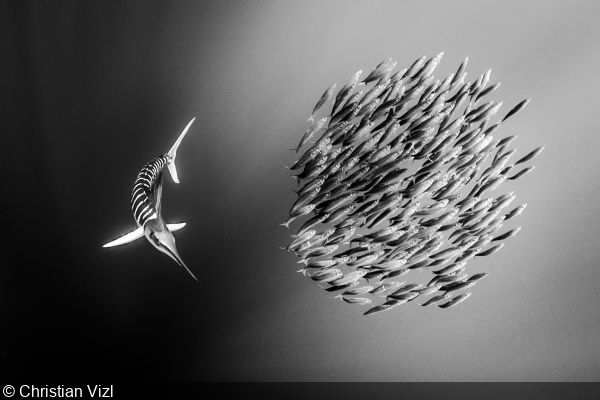 DPG: You often shoot underwater models, and have a section dedicated to this on your website. What does it take to be successful on these types of shoots?

It's been a while since my last project of that type, but definitely the key element is your model and his or her ability to express emotions through the use of body language. You become a team where you are responsible for the general concept of the shooting; what story do you aim to tell through your images? Then you need to be able to transmit that idea to your model and be ready to capture their interpretation of those ideas with your camera.

DPG: I am a big fan of your cenote images. What do you like most about diving in these special locations?

As with all nature, the cenotes are part of a system that connects with the ocean, with a natural balance which took eons to achieve, and where a wide range of animals and plants coexist in harmony, keeping a balance of mutual conservation in a variety of habitats. Some cenotes even have endemic species of fish, found only in that particular cenote! I've been diving in the Mexican cenotes since 1994 and I have always been fascinated by their natural beauty and magic. They represent an endless source of inspiration, both by their intrinsic naturalistic beauty, but also by their history and spiritual meaning. The ancient Maya people located the origins of life in the water; it was where life emerged and regenerated. The cenotes were considered sacred places, powerful and symbolic, that represented the gateway to the spiritual underworld, to the afterlife, a place of rebirth. 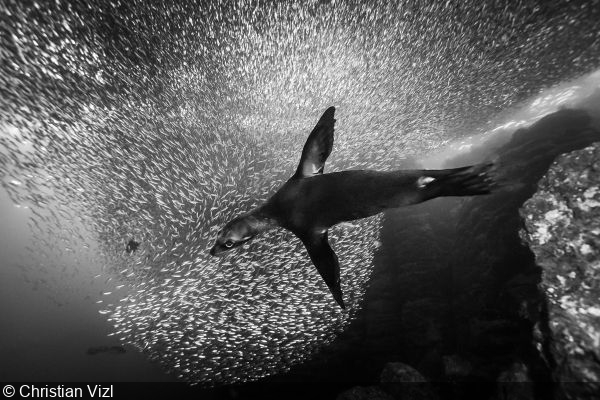 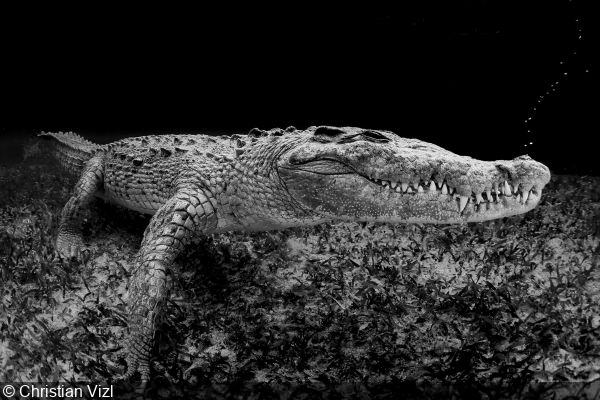 Keep pushing the conservation agenda, now more than ever. If we want to have a future on this planet, we need to realize that our lives depend on the health of the oceans, and we must start to act accordingly. Protecting its vital ecosystems is key to protect all life on this planet, so we must do whatever is necessary to find a balance where we no longer destroy nature and restore much of the damage we have done. One of the tools I have to put my grain of sand towards this goal are my images, so I plan to keep doing them for as long as my health allows and as long as there are animals beneath the waves. 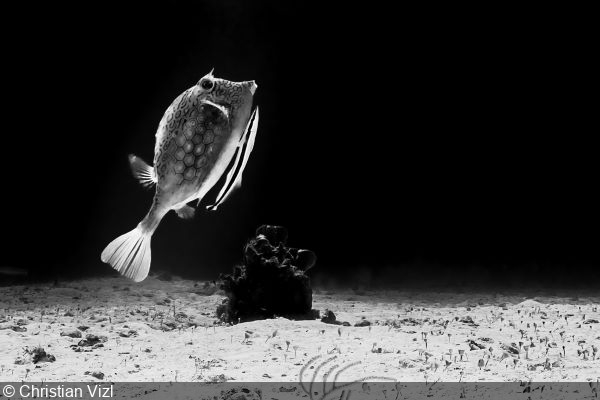 A trunkfish being cleaned by a remora on a reef, Cozumel, Quintana Roo, Mexico 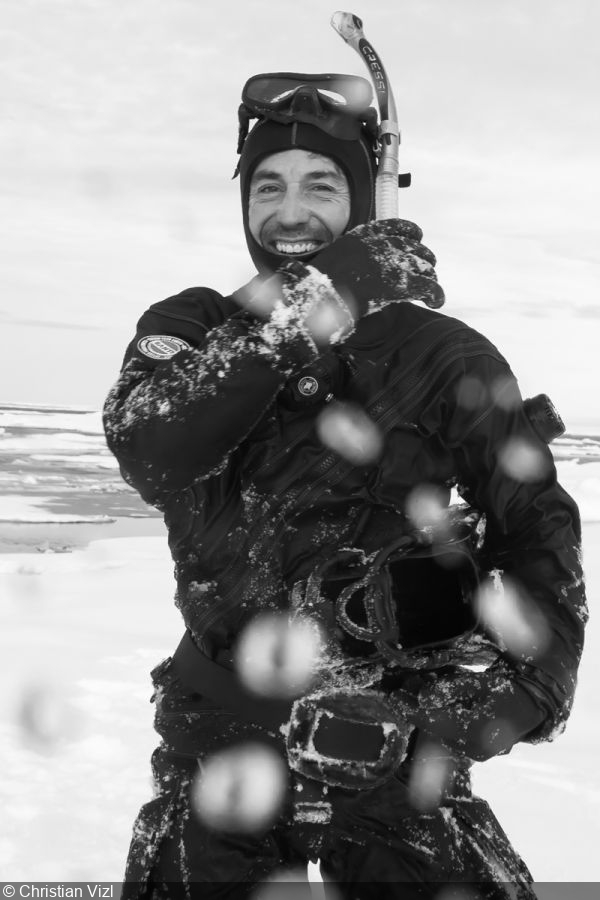 Christian in his trademark black and white, in the Arctic

To see more of Christian's amazing images and keep updated on his latest projects, check out his website, www.christianvizl.com.

Rubina Sibertan wrote:
You said right if your mind is very clear while clicking pictures if your focus is clear then you will get amazing collection

Tina Shaw wrote:
keep it up

Hippolyte Barnier wrote:
These pictures are stunning.
Thank you !

Nellie Brady wrote:
Appreciate your effort. Keep it up!

Sally Bruce wrote:
Quite impressed by your way of clicking pictures.

LauraJeanne LauraJeanne wrote:
It felt amazing to get to know about your experience I love scuba diving

Riley Hazel wrote:
Your sensation of having a camera underwater and being able to capture some scenes of the animals that I have loved so much since I was a kid felt amazing!

Peter brak wrote:
Keep it up good pics
You must be logged in to comment.
Support Our Sponsors
Advertise With Us
Newsletter
Travel with us