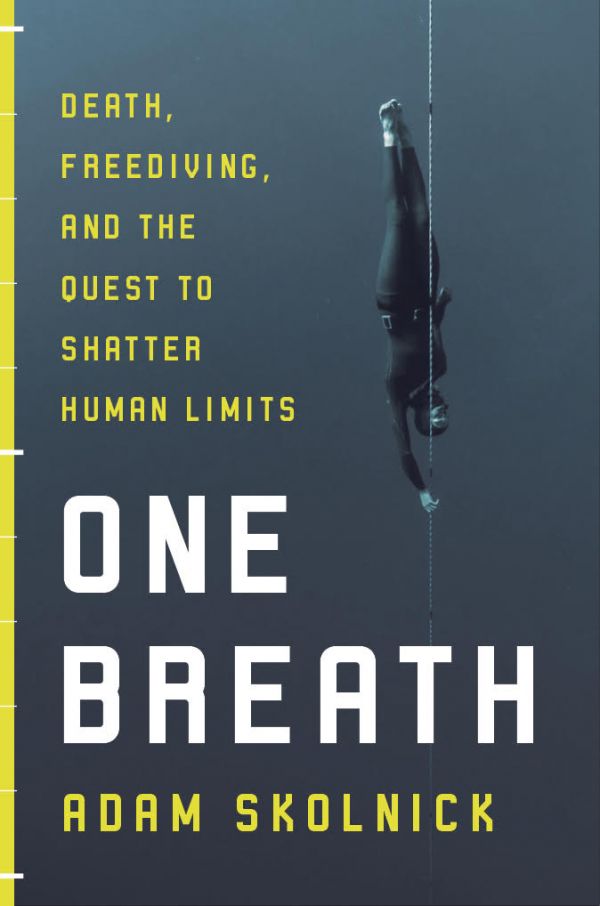 Adam Skolnick and I have been collaborating for a couple of years now in a writer-photographer relationship. In 2013, we went to the Bahamas on an assignment for the New York Times to cover William Trubridge’s world-famous freediving competition, Vertical Blue.

While we were there, tragedy struck when American freediver, Nicholas Mevoli, died while attempting a 72 meter Constant No Fins record for the US (it’s like doing breast stroke to 72 meters and back again on one breath without fins). His death became an instant news story, and our writing and images were suddenly all over the media. Where freediving isn’t typically covered in the way that a lot of professional sports are, Nick’s death was significant in that it was the first in competition, and he was a rising athlete from Brooklyn.

Where my role in the story was brief, with the exception of a few subsequent stories that used my images, Adam’s relationship with the story was just beginning. Unable to shake the questions he had about the manner in which Nick died, what drove him to push himself to the limits, and the life he led outside of freediving that culminated in this poignant moment, Adam began a journey through Nick’s footsteps in search of answers and resolution. Adam recently talked with DPG about the experience writing “One Breath: Freediving, Death, and the Quest to Shatter Human Limits.”

Lia: Tell us about “One Breath,” and why you chose to write about a freediver’s death?

Adam: This story chose me, in a way. I was there, in Dean’s Blue Hole, covering Vertical Blue 2013 for New York Times Sports when Nick died. It was my first ever freediving competition, and Nick's was the first death. Suddenly, my small story on a niche sport became front-page news for a couple of days.

People were fascinated by this sport and Nick; I was as well. When you are present, as a reporter, for a tragedy or some sort of breaking news story, the rush stays with you, and so does the sadness. Mostly it rises in the form of curiosity, so about a month after Nick died, I got in touch with his family and the more I learned about him, the more I saw a character who reminded me of (US hiker) Chris McCandless from (Jon Krakauer’s book) Into The Wild. It felt like a book, right away. 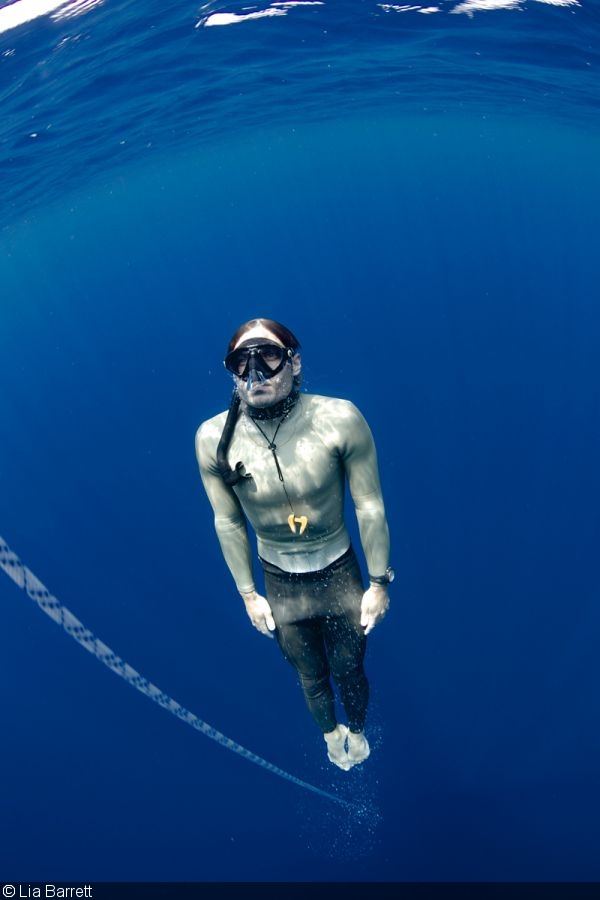 The first photo I ever took of Nick Mevoli; we hadn’t even met yet; shot off of Roatàn, Honduras

Lia: With so much to be learned still about how freediving impacts the human physiology and about human limits, what should freedivers and future freedivers take away from your story?

Adam: Competitive freedivers should get their lungs checked regularly and stay out of the water for 1–4 weeks anytime they spit up blood. They should also get checked for pulmonary hypertension, which could indicate scar tissue in the alveoli, like Nick had. Recreational freedivers should always dive with a buddy and get proper training, and new freedivers mustn't be in a rush to get to depth. Go slow to get deep.

Lia: In writing the book, you researched Nick’s life extensively, basically following the trail he maneuvered over the course of his life. What in yourself, if at anything, do you see that was similar to Nick?

Adam: I like to think we are both seekers, and like him I looked for a way to live creatively. Money jobs would never satisfy for long. I craved freedom, and was something of an activist, as well. Like Nick, I need the ocean. I try to do the kind thing when I can. But I am not as generous as he was. I don’t have his talent to listen deeply and patiently. I am not close to the athlete he was either. I would never dumpster-dive and he’s a better cook. His family sees similarities. In some ways I’ve played the part of a surrogate Nick during the research and write up of this book, and it’s been an honor. 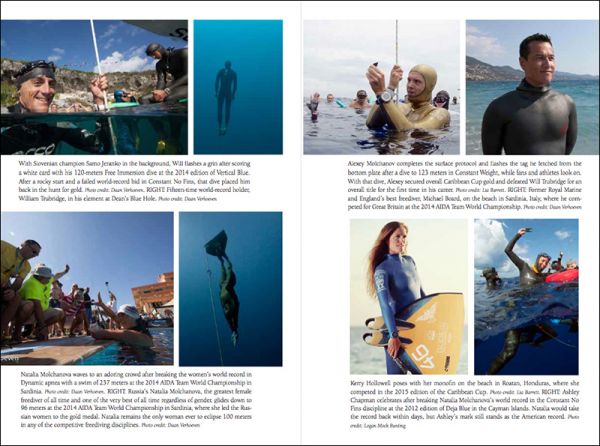 An inside spread from “One Breath,” illustrating the faces and figures of the freediving sport

Lia: I have heard many people writing off freediving as a dangerous sport. After having spoken with dozens of doctors, competition judges, and the world’s greatest freedivers, do you think freediving is a sport worth pursuing?

Adam: Yes. It’s a sport that involves risk, but those risks can and should be calculated, and with proper backup and safety protocol, recreational freediving is not dangerous and certainly a sport worth pursuing. It's beautiful and thrilling. 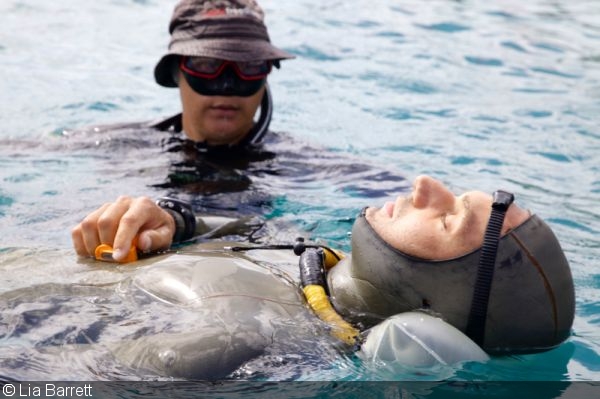 Lia: Writing about freediving is sort of like walking into the lion’s den, for the community is extremely close and protective of their sport. What has been your process in navigating this knowledge, and how do you please the masses while still telling an honest, and at times, difficult story?

Adam: When I first arrived on Long Island for Vertical Blue 2013, most athletes were skeptical of me and my motives. They wondered how much I knew about the sport (almost nothing), and why I was there at all (Lia Barrett). After Nick died, and the first of the two New York Times stories posted, most of them were relieved that I had covered it respectfully.

Over the following season, I was coasting on that goodwill and, with some, it wore off by the time I came back to Long Island for Vertical Blue 2014. It had been a year since I'd written anything about the sport and many folks were becoming suspicious again. Of course, I had my allies too, and managed to get every interview I needed to make the book the best it could be, but there were some uncomfortable moments. Some I could have avoided with a bit more sensitivity, and others were probably unavoidable.

Thankfully, since then freedivers have really embraced the book, as well as a handful of recent articles on freediving published in Playboy, New York TImes and Outside in the last year. They see my work as an honest depiction of their sport. That means the grace, beauty, intelligence and athleticism are always in there, and so are the issues that the sport must grapple with going forward. I’ve always respected the athletes and now it feels as though there is near universal mutual respect, which is the most any journalist can hope for, I think. 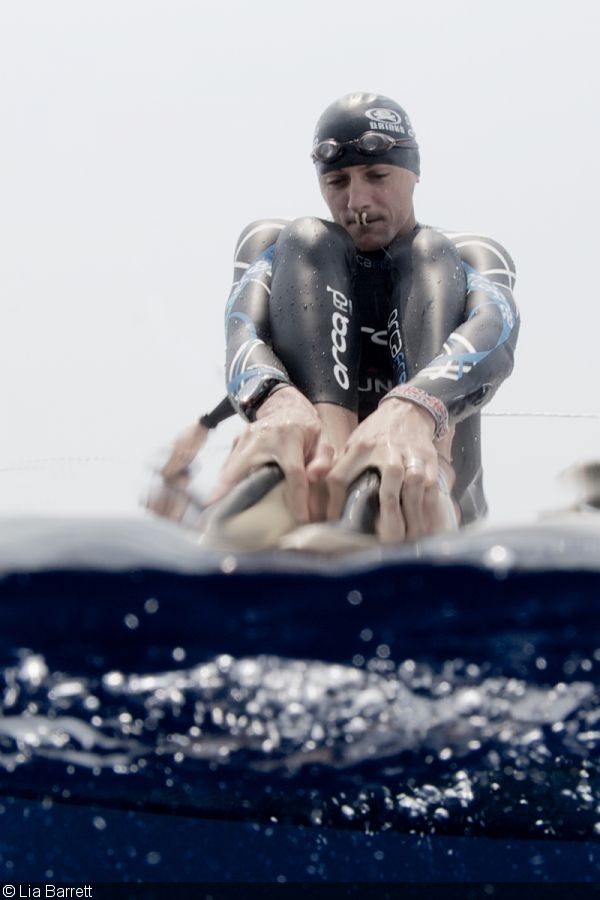 Lia: What was the most rewarding aspect of your journey?

Adam: Freediving to 100 feet, spending so much time around passionate athletes and in beautiful international locations, becoming close with Nick’s family, and writing what I hope is a beautiful book. I really enjoyed writing it. 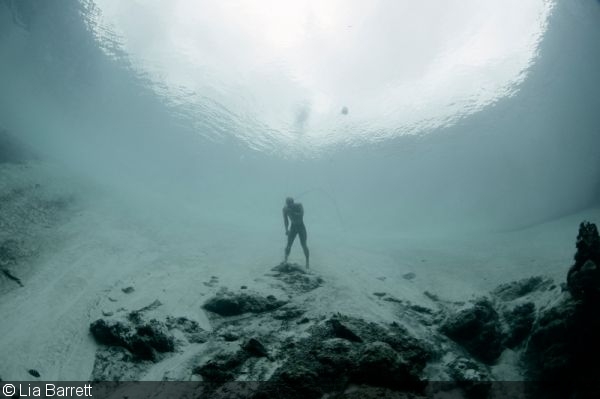 Alexey Molchanov recovering on pure oxygen at five meters after a deep No Fins dive in Deans Blue Hole, Bahamas.

“One Breath: Freediving, Death, and the Quest to Shatter Human Limits” is available from Barnes and Noble, Amazon.com, and a variety of other outlets. More information can be found on OneBreathBook.com or Adam Skolnick’s official website.