In this latest article in The Guide, DPG’s Photo Editor Lia Barrett talks to freediver, photographer, and activist Fred Buyle. Step into Fred’s fins as he swims alongside great whites, helps film “Great White Shark 3D,” and engages in freediving for research. 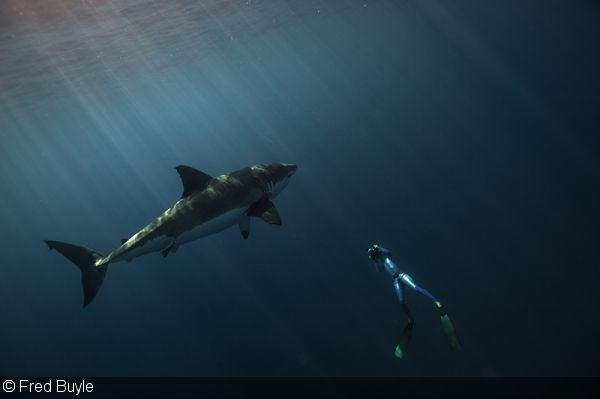 I always pay attention to young male white sharks. They’re like teenagers—they test themselves and can be very pushy.
—Fred Buyle

DPG: What was it like the first time you entered the water with a great white?

Fred Buyle: Even though I’m from what I call the “Jaws Generation,” since I was a kid I always wanted to freedive with a white shark. I had opportunities to do some cage diving, but I never did it—I wanted to have a true encounter. In 2007 I finally met my first great white in South Africa. When I got in, the shark was 30 feet away, at the limit of visibility. It turned and swam carefully towards me, and for a split second, I heard the theme from Jaws. However, it didn’t last, and I realized how fragile this predator is—in fact, it looked as cautious and curious as I was. 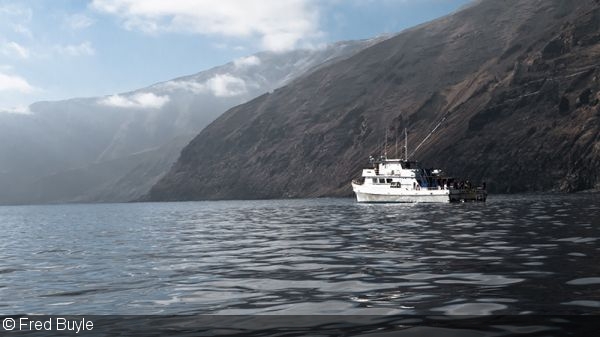 DPG: For a “blue chip” documentary, do you do a lot of storyboarding or take what the animal gives you?

FB: It's very difficult to have a storyboard. With our knowledge of the sharks, we have a good idea of what we can achieve in terms of footage and how to have the sharks interact where it’s the best for the camera. There are always little frustrations but also surprises that make the experience unforgettable. After capturing the interactions, we have to do all the cutting and editing shots that are so important in telling the story.

DPG: How do you and [fellow freediver] William Winram coordinate who is going to go for shots, so as not to be in each other’s way?

FB: With Will we have so much time together in the water that we know exactly how each other reacts, prepares, dives…. We never get in each other's way and we don’t really need to talk or even signal—it has become very natural. 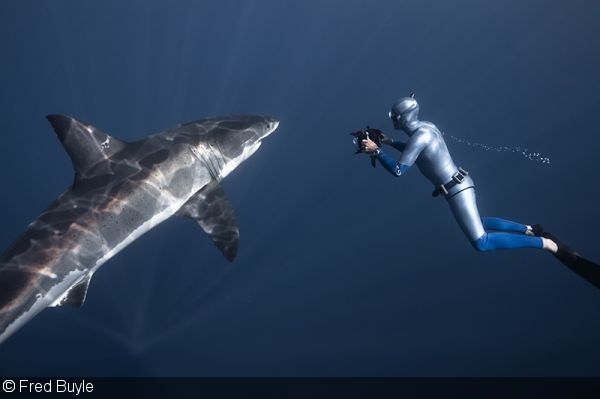 DPG: When filming, was it easy to find the great whites, or were there days when they didn’t show up at all?

FB: For that scene, we were only three days on site. On the first day, we didn’t get anything in the box! When it’s like that you have to avoid, at all costs, to put pressure on yourself. The week before we were also in Guadalupe on one of our trips and we had sharks all the time, every day! The sharks are usually easy to work with over there, but you never know exactly how it’s going to be.

DPG: At what point when you are freediving and shooting do you know that it is time to work your way back to the surface?

FB: When you have been freediving for years and years, you don’t think about that anymore. In fact, unconsciously you always keep a safety margin when you are diving, and when you are working with apex predators and large marine mammals, you keep an even larger margin in case you have to stay longer or solve an unexpected situation.

DPG: How cold was the water?

FB: Water is 70° F in early November in Guadalupe—not too bad. 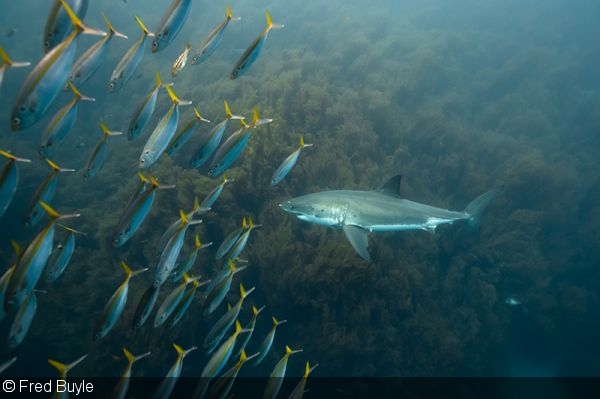 Maia, a large female great white, in the shallows of Guadalupe

DPG: What other sharks do you dive with?

FB: All kinds of sharks! But some are more fun to dive with. I’d say the sharks I prefer to interact with are the tigers from the Indian and Pacific Oceans and the blue sharks I have at home in the Azores in summer. My favorite shark, though, is the great hammerhead. It’s a magnificent animal—and surprisingly shy despite its presence and size.

DPG: Which sharks have been the most curious or aggressive while filming?

FB: I always pay attention to young male white sharks. They’re like teenagers—they test themselves and can be very pushy. Otherwise, middle-sized sharks like silvertips, duskies and Galápagos sharks should be considered tricky, because they are not very large predators—like tigers or whites, which are very careful—but these midsize sharks can be opportunistic. 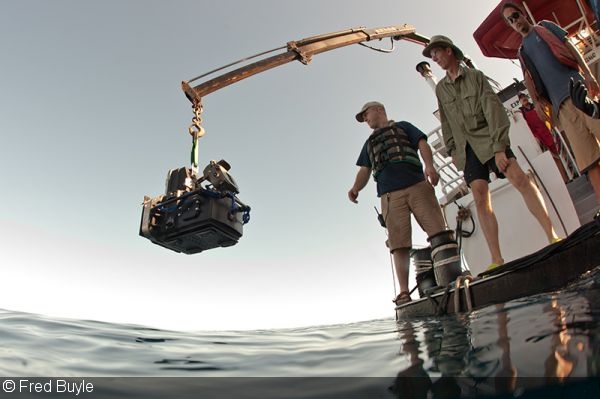 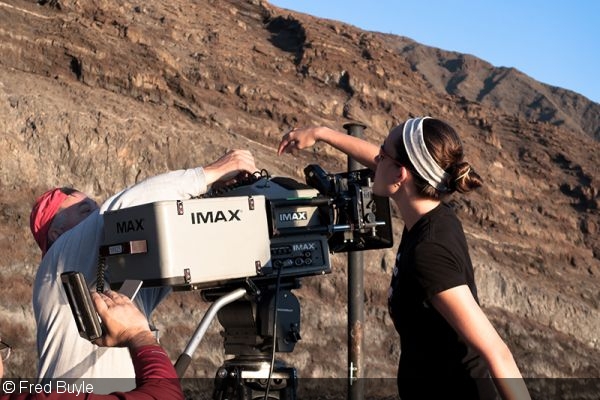 The famous topside IMAX 70mm camera, loved for its immaculate resolution. Shooting must be extremely selective: each magazine contains only 2:30 minutes of film, with per-roll processing costs upwards of $10,000

DPG: How many cameras were on location? Do you carry backups?

FB: The IMAX guys had all kinds of bits and pieces! These cameras are almost prototypes and one-offs. On my side, when I’m on a shoot, I travel with the minimum—my philosophy is to be light and efficient. If you start to bring too much equipment and think about what can go wrong, it’s because you don’t trust what you have.

DPG: How long was a typical shoot?

FB: We try not to spend more than an hour at a time in the water. After that, your attention and focus decreases, so it’s better to take a short break and then get back in. But sometimes when the action is good—and peaceful—we can stretch that. 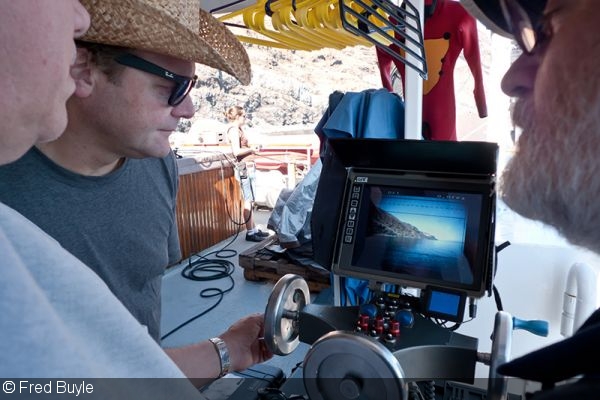 DPG: Were you shooting stills as well as film? If both, how did you decide which to use at one time? In general, which do you prefer?

FB: I always prefer stills. I like telling a story with only one frame. Nowadays, it’s tempting to shoot video as well, as it’s much more accessible and not as expensive [as in the past]. One thing is for sure during a dive: I choose before getting in if I’ll shoot stills or video—each is a very different mindset.

DPG: Any bloopers or mishaps that weren’t in the film?

FB: We lost two safety freedivers and a production assistant to the sharks. Just kidding! We always have fun moments—but they’re usually inside jokes. 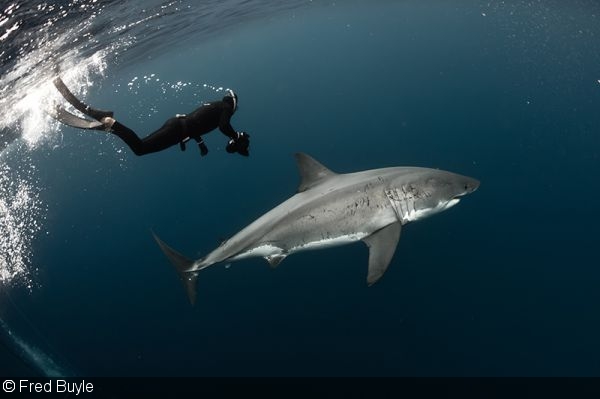 A female great white cruises by 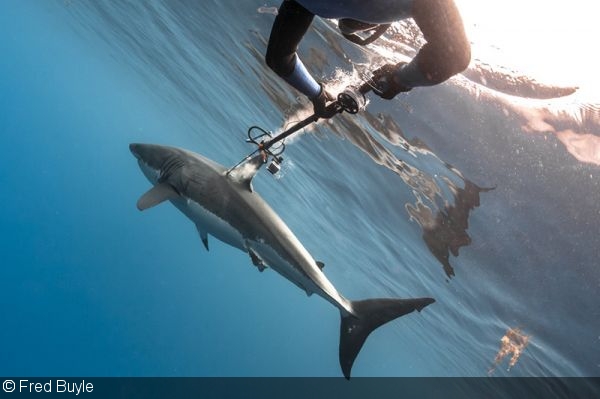 A great white being tagged using a modified speargun

DPG: What did it feel like the first time you tagged a shark?

FB: The first shark I tagged was a scalloped hammerhead in Malpelo in 2006. Back then, the gear was not great and it was a bit stressful to shoot at the shark with a $3,000 satellite tag. Eventually, everything went well, and the 20-plus years of spearfishing helped a lot in the approach. The tag showed that the shark traveled more that a thousand miles to get to the Galápagos. I must say that it’s very rewarding to see what happens after the tagging. So far, I've tagged or biopsied around 200 sharks.

DPG: Where is your next stop?

FB: Our next mission with Will is with the great hammerheads in the Bahamas. Looking forward to that! 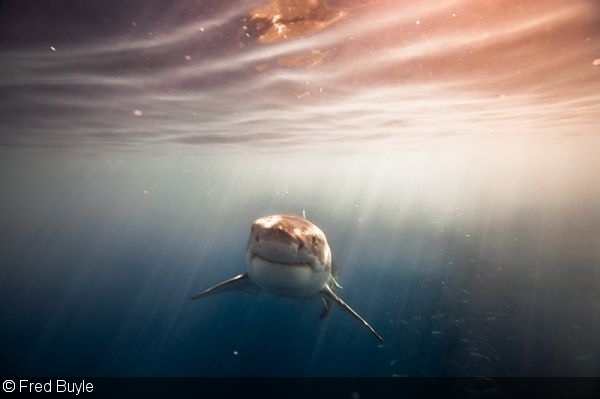 A great white shark will always try to approach you from a hidden angle, or with the sun at its back

Note: Diving in Guadalupe without a cage is forbidden. Proper permits for swimming and freediving without a cage were required before filming “Great White Shark 3D.”

edouard mollard wrote:
she have balls ! clap clap
You must be logged in to comment.
Support Our Sponsors
Advertise With Us
Newsletter
Travel with us 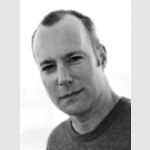