Into the Rabbit Hole
Climbing the carpeted steps down into Cathy Church's photo gallery and camera store has a feeling strangely familiar to all divers.

Located in the basement of the Sunset House dive hotel in Grand Cayman, the entrance to this underwater photographer's haven is little more than a small cut-out in the hotel wall, leading to a narrow tunnel down into the store.  With every step down the blue-carpeted steps, softened by years of the humid Caymanian-air, the warm light from the sun outside seems to fade, giving way to the predominant blues painted on the walls of the small hallway.

On either wall hang photos of the usual Caribbean subjects -a nosy sea turtle almost popping out of the frame, a pair of graceful queen angel fish circling a colorful coral head, and even a platoon of stingrays gliding in the waist deep-water of stingray city- all within an arms reach. With a few final steps, lit by strings of Christmas tree lights taped to the floor, you reach a door: not some Narnian-like entrance into another world, rather just a light-weight plastic door shut tight to keep in the cool air conditioning. Before you realize it, you are immersed in Cathy Church's underwater realm, without even getting wet. 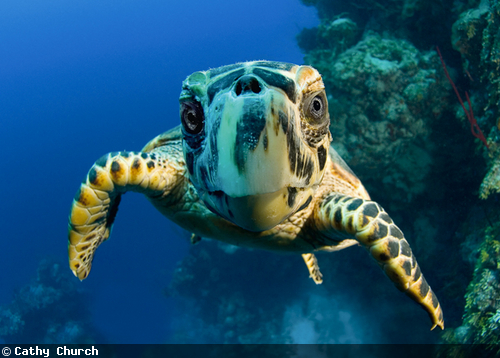 Humble Beginnings
At a foldable table, where so many lessons have taken place over the years, Cathy sits, still wet from her last dive, perhaps no more than 30 minutes earlier. Amidst her busy schedule of instructing, rushing to send her shots of the recently sunk USS Kittiwake to Sport Diver Magazine, and entertaining visiting friends diving one of Caymans 365 dive sites, Cathy seems as excited reminiscing about her routes into photography as teaching her millionth student the best ways to photograph Christmas tree worms (one of her favorite subjects).

“It was as an adjunct to learning marine biology that I took up photography. I had never been a photographer above water, it didn’t interest me and still doesn't,” explained Church with a laugh. “If something bores you, you're going to take a boring picture, but if something excites you then you will take exciting pictures.” 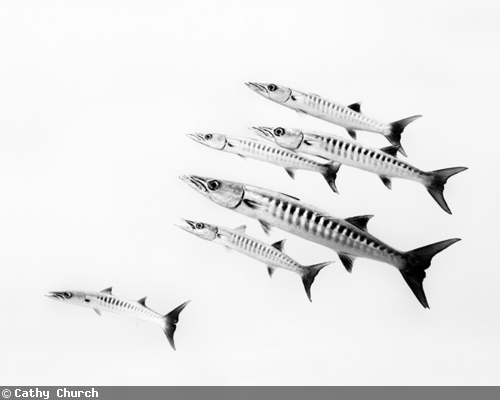 In her early foray into marine biology and underwater photography, Cathy recalls inspiration from figures such as Euginie Clark –an American ichthyologist popularly known as “the shark lady”– and Scuba legend Ernie Brooks. Church remembers working tirelessly for days on a single black and white print only to be amused by Brooks’ response- “I’ll tell you what, let’s just start over.”

Forced to return to her undergraduate studies at the University of Michigan, Church was unable to pursue a career in black and white photography at the time. Instead, she was thrust forward into the birth of underwater exploration.

“There were no cameras, there was no scuba certification, and there was no PADI," she said. "You just jumped in the water.”

Pioneering the Way
After leaving the University of Hawaii's marine biology graduate program, Church turned towards a profession as an educator, teaching science to seventh and eighth graders during the fall and winter, while spending her summers in Cayman teaching a different subject- underwater photography. Not long after, Cathy and her late, ex-husband Jim Church, found themselves in the midst of an ongoing underwater photography revolution.

“We were pioneering techniques and ideas way back from the beginning,” Cathy recalled, in reference to some of the earliest camera housings and even flash strobes. “It was a real struggle to get anything to work.”

Like pioneers pushing towards a new frontier, Cathy and her contemporaries struggled to find solutions to problems long forgotten in this digital age. From techniques like apparent imaging, to working with old-fashioned flashcubes underwater, and even sealing light meters in Skippy peanut butter jars, Cathy was as much a part of the change in the underwater photography world as it was a part of her.

Doing it Right, in Black n’ White
Setting the underwater photography progression in a linear timeline, Church recalls the sixties and seventies as a time of recording and documenting marine life, a task that would transform into her career as an editorial and travel writer in the eighties, before finally hitting her full stride in the 90's with black and white prints.

For this underwater Ansel Adams -one of the photographers to which Cathy most aspires- printing in black and white was as much a part of the art as the photography itself. Turning to one of the many prints hanging from the walls of this basement turned gallery, Cathy points to a favorite of her favorite color-free prints as an exemplum of the good-old-days of black and white printing: the dark, growth encrusted keel of a wreck pushing out of a white background. 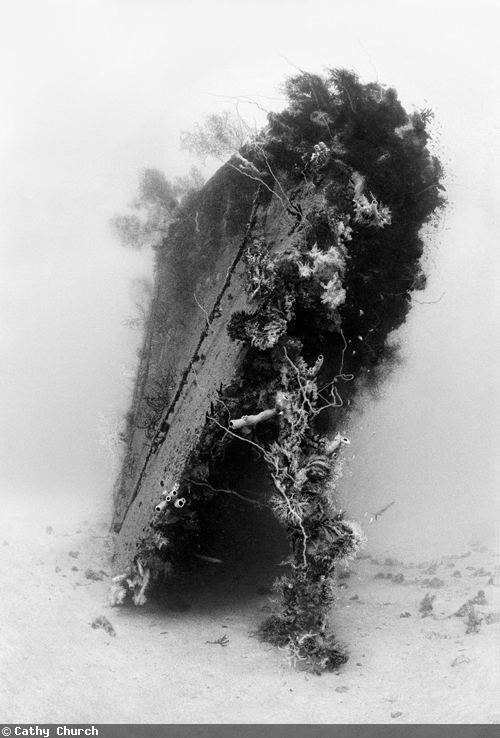 “Sometimes it would take me 3-4 days to just figure out how to print that bow so that the blue background was a fairly even lighter hue,” said Church, reaching out to the print as if painting in the strokes of black and white with her fingertips. “Now, people can just go into Photoshop and do it with a click, but you can't quite get the lines and the softness and the innuendos of dark and light just right. I did it for the pure art of it.”

“What good is that in black and white?” asks Church, pointing to an abstract of a yellow tube sponge miraculously shaped into the form of a conducting penguin. “Actually, I should give that a try,” she added with a smile.

Imagination in the Digital Age
Every picture is a child of Cathy's imagination, a product of some blend of creativity, boldness, and her brazened spirit. She points to another picture, an abstract of a twisted anemone tentacle in the shape of the infinity sign taken nearly two decades after the ship keel, as a testament to the arrival of the digital age. 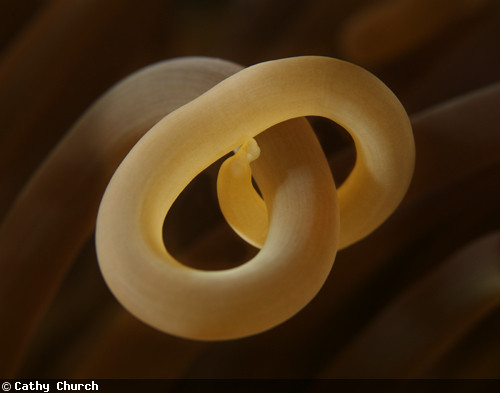 “It's about what it makes you think of, moving your lights, and finding out what appeals to you,” she explains “We are no longer just documentarians, it is about the art.”

She stands up looking for one of her prints -that of a backlit sea biscuit- only to find it missing from its designated position for display. In a remarkably matronly way, she circles around the perimeter of the gallery until finding that one photo, and bringing it back to the small table at the center of the room. Recalling the very moment where this photo came to life, Cathy's eyes flash wide open, as she describes the back-lighting technique used to achieve the final product. 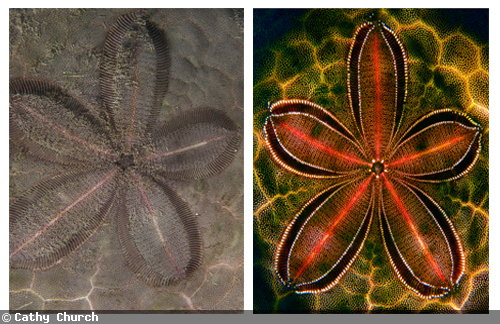 Before and after shot of the half body of a sea biscuit. The left image was taken with "normal" lighting and the right with backlighting, while also adjusted in photoshop to make it look more like a flower.
“Digital became an enormous breakthrough for creativity,” stated Church. “I no longer have to say 'this inspires me but I don't know how to visualize it as an image just yet',” she added with a grin, almost imagining the many more unique photography opportunities waiting in the ocean, just a few hundred yards from where she was sitting.

Even her less-than-orthodox views regarding post-processing in underwater photography seem too reflect her open personality.

“It’s all part of the art,” said Church, drawing on Ansel Adams as an example of a photographer who often changed his background in the editing process. The goal, she says, is “to come back with feelings and happiness; and to enjoy the journey.” That’s her motto.

An Uncertain Future
For a photographer whose name will be forever etched into the history of underwater photography, her remembrance of this past seems overshadowed by a concern for the future. Looking to the future of photography under the waves, Church predicts that 3D photography and videography will replace two-dimensional media soon enough.

“The biggest problem underwater photographers face is finding living creatures,” said Church, with a rare chord of vulnerability in her voice. “There are still a lot of beautiful things, but you have to zoom into a very small part of the world to fill your frame with something exciting.”

Fin of Zebra lionfish in Papua New Guinea
That perhaps, is the greatest downside to witnessing the rise of mankind’s underwater exploration- watching its destruction. But Church does not linger long on the fallibility of the world’s oceans, and rather turns towards the steps that can be taken as underwater photographers and ambassadors to the environment. She asks for better buoyancy as divers and photographers, and furthermore to take three basics steps to do our part for what she calls “lip service” to the reef: join environmental organizations (on a national, regional, and local level), vote green, and stand up to lawmakers through the power of the written word.

In other words: if we can shoot it, we should save it. 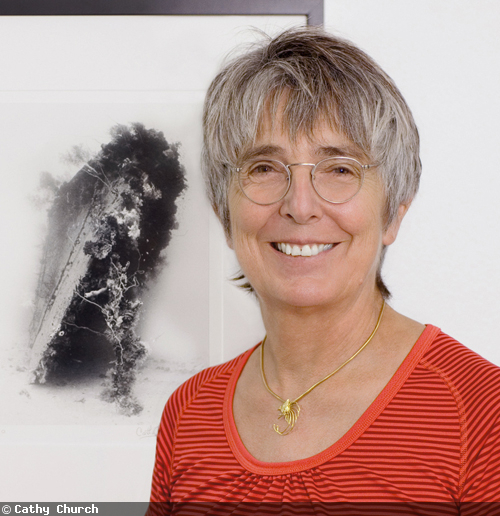 Leaving Cathy Church’s underwater universe in the Sunset House basement, I push the light-weight door open, greeted with the warm draft of a Caribbean breeze forgotten in my short, air-conditioned tenure in the gallery. Ascending the blue-carpeted steps, I look again at the photos surrounding my departure, as the light at the far end of the stairs marking the surface draws closer.

I don’t just see pictures anymore. With each photo, be it the nosy turtle or the squadron of stingrays –both iconic images of Cathy’s Cayman photo collection– I now see a journey. Too often we forget to take in the moment, distracted by the pygmy seahorse at the tip of our housing or the schooling hammerheads overhead. Cathy Church’s story and photographs are reminders that taking pictures underwater is more than just clicking the shutter down: it is about honoring the past every time we giant-stride into the water, absorbing the present wonder unfolding right in front of our masks, and helping assure the future of our oceans and our art. It is about “enjoying the journey.”

Surfacing from the underground, underwater gallery, I peer down the dimly lit staircase into a seemingly blue abyss; and I know it will only be a short surface interval before I dive back in again.