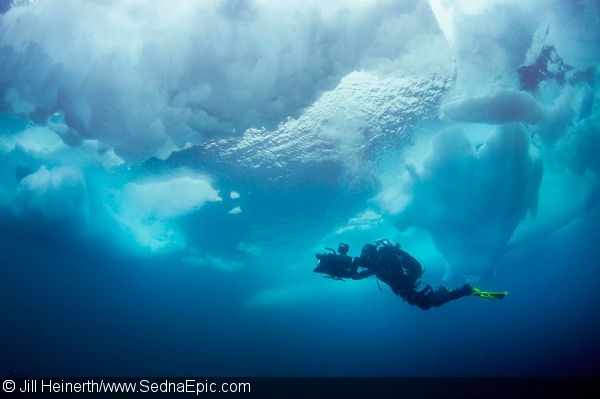 Safety is extremely important. … No shot is worth dying for.
—Becky Kagan Schott

DPG: First things first, just how heavy is an Emmy? Because you seemed to have been carting around an armful during the Suncoast Emmy Awards on December 13th. Your biceps must have gotten a workout!

Becky Kagan Schott: At least I’m used to lifting a lot of heavy cases and dive gear! They feel like they are about five pounds, but I haven’t weighed one. The funny part is I didn’t think we’d win so I never thought about how we would get them home!

DPG: Tell us a bit about the project that warranted such accolades. And what were the honors you received?

BKS: The project was called Cave Diving: Beyond the Limits, which was a special that aired last May on CBS. It was on a topic that I’m personally very passionate about: promoting the importance of training for cave diving. I was personally proud to work on the special, and we had an excellent team. We wanted to show the public the beauty of caves and the importance of the skills and experience needed to dive in them. The half-hour special won an Emmy Award; it also won for Promotion, Serious Feature, and for Technical Achievement. We were all extremely blown away by how well it did. 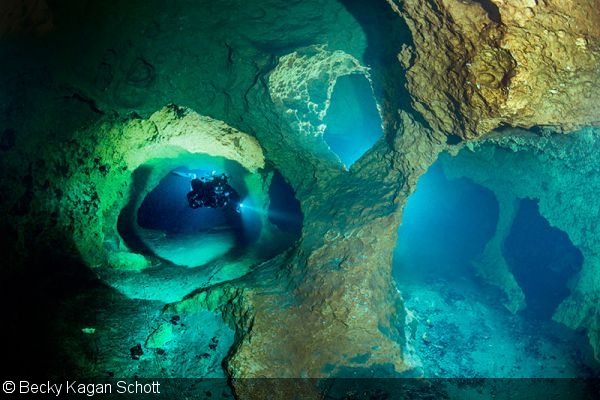 DPG: How did the project come about?

BKS: In November 2013, David Sutta from CBS and I were talking about putting together a series on cave diving in Florida. The following month, on December 25th, a father and son dive team died in Eagles Nest cave after going over 230 feet deep on air and penetrating into the massive and dangerous system. The father was only open water trained and his 15-year-old son had no scuba certification at all. This really lit a fire to stress the importance of training, so this never happens again. There are so many open water divers in Florida and many of them visit the beautiful freshwater springs. They may poke their heads into the caverns but don’t realize the trouble they can get themselves into. 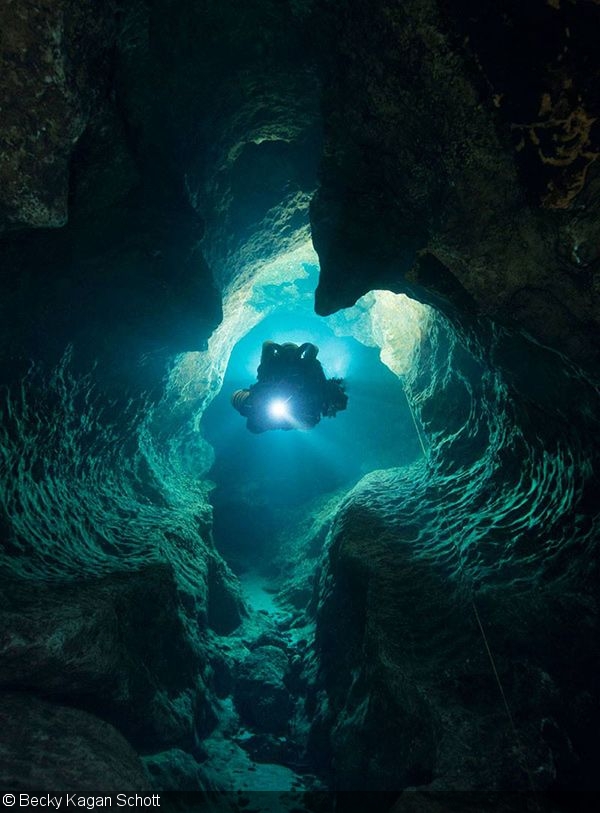 BKS: I took my cavern class when I was 14 because the springs were free or inexpensive to dive. They were right in my backyard growing up in Orlando, and there were lots of them around. My dive buddies would venture into the cavern zone, and it just made me feel uncomfortable at the time when I saw the grim reaper signs saying STOP or you’ll die. After taking a cavern course I enjoyed diving within the light zone and then started cave diving when I was 16 years old. I fell in love with technical diving—the planning, the challenges and skills I learned. I started taking photos around that time to try and show family and friends what cave diving looked like. I quickly found it’s not easy to shoot in a dark environment but again I thrived with a challenge. Taking a camera adds a lot of task loading and a lot of safety considerations. I became a solid diver first; then I started filming in caves. 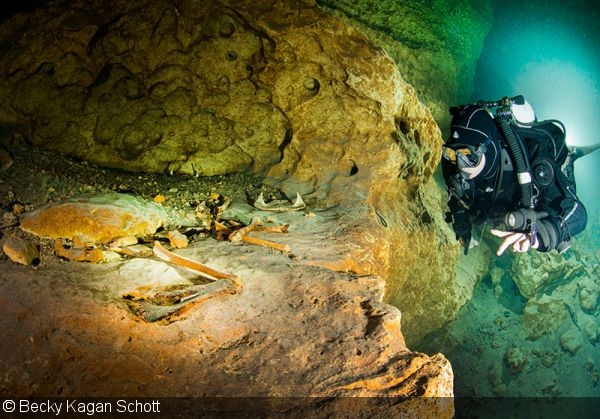 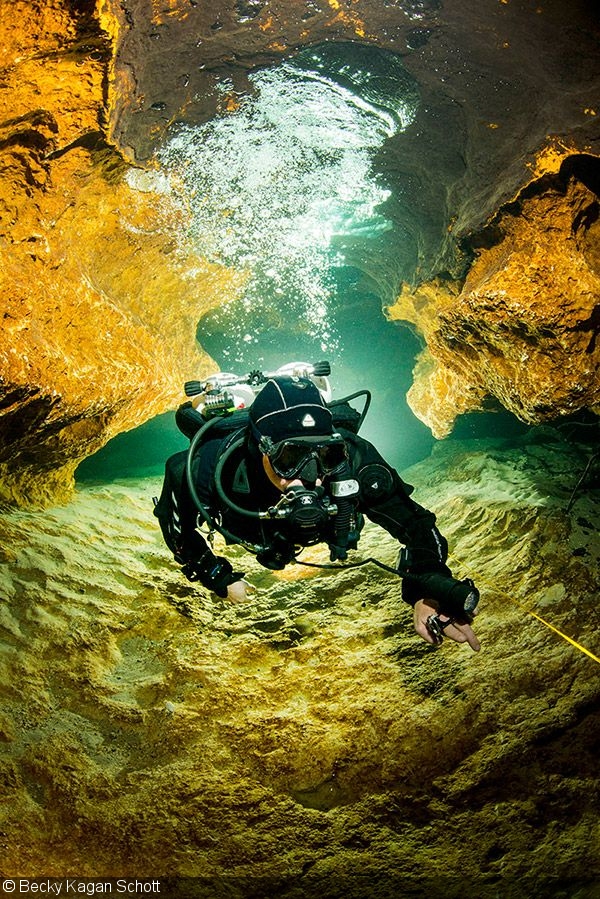 DPG: What are the occupational hazards you face, and how do you keep yourself and your colleagues in check, so as to maintain a safer work environment.

BKS: Safety is extremely important. We dive in extreme environments and each one deserves a lot of respect and a solid plan before executing it. Diving in a cave, you have to be really aware of the environment, silt, where your fins are, the current, directing, lighting, talent, watching gas supply, knowing where the exit is and the lines are. Sometimes we’re on rebreathers so we are monitoring PO2 or diving with full-face masks. On top of that you have producers that are usually pushing you hard to get a huge shot list in a small amount of time.

Choosing the right team for the job is really important and making sure everyone is a team player and can commit to the task they’re asked to do. I don’t really feel I have to keep anyone in check because I try and work with divers that are really experienced so I can really focus on filming. It doesn’t always work out that way on every production but the ones that do go much smoother. I think the biggest hazard I usually face in the caves is being left behind. I move slower with the camera and have been left accidentally a few times. I now have a safety diver at all times whose job is to stay with me and stay behind me. I always carry my own bailout if I’m on a rebreather and I’m not afraid to pass off a camera if I need to. No shot is worth dying for. 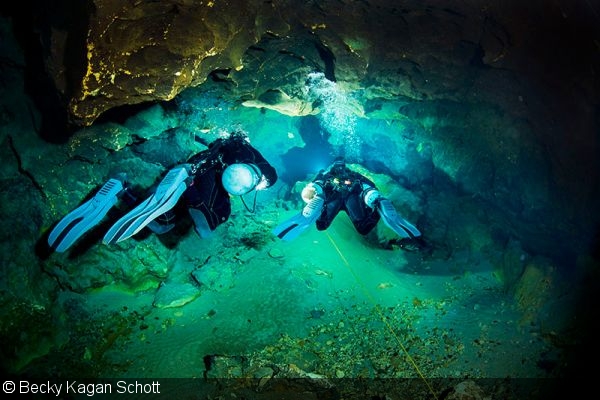 DPG: It can’t be easy to get your camera equipment through some of those enclosed spaces. Give us some insight into how you do this.

BKS: Carefully! I scratch a few dome ports a year but I’ve learned to live with it and have a few spares on hand when shooting 4K and 6K video. I’m actually asked this question a lot and it’s funny because I don’t put much thought into it. I just do it! I don’t dive a lot of teeny-tiny caves and I usually joke by saying if my camera doesn’t fit, I won’t fit! If it’s a small cave like the one we filmed for this CBS series, Matt Vinzant [safety diver/lighting assistant] helped me get the camera though some of the tight spaces. He’d go through a restriction first and I’d pass the gear to him and then come through so I could get situated. It’s really helpful so I don’t scratch any more of those ports!

DPG: How much does your rig weigh?

BKS: Nothing—in the water! We have a few camera systems but the largest we are currently using is the RED Epic Dragon in a Gates underwater housing, which weighs around 60lbs, depending on what configuration we’re using. 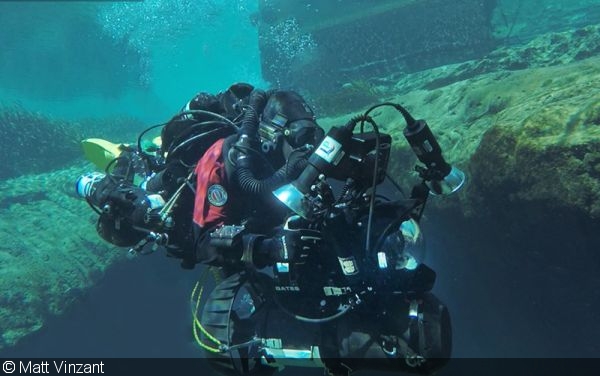 DPG: Have you had any close calls while shooting/diving in caves?

BKS: Sure! If nothing ever happens to you then you’re not diving enough. I’ve been bent, left behind, and I’ve had equipment malfunctions at the worst times. We learn from all of these experiences and this is why our safety plan is so important. Caves are dangerous and even small mistakes can cost you your life. We try and avoid complacency—and I personally use a lot of checklists—but life support equipment comes first.

DPG: You are, in my mind, and in the minds of many fellow shooters and divers, an exemplary example of a strong, successful female within the industry. Have you found it challenging to get to where you are, or do you not put any weight on that aspect of the journey?

BKS: Thank you, that’s a huge compliment. To me failure was never an option, even though I’ve had my share of bumps in the road—I just changed direction and found another way of following my dream. Each challenge just reminded me how badly I wanted this and would make me fight harder for it. My father passed away when I was 13, just a year after I got into diving. Scuba helped get me through the hardest times in my life, and I learned at a young age that I should follow my dreams no matter what it took. It’s taken a lot of patience, hard work, and passion to get here, and every day I am thankful to have combined my love of diving with photography and video. 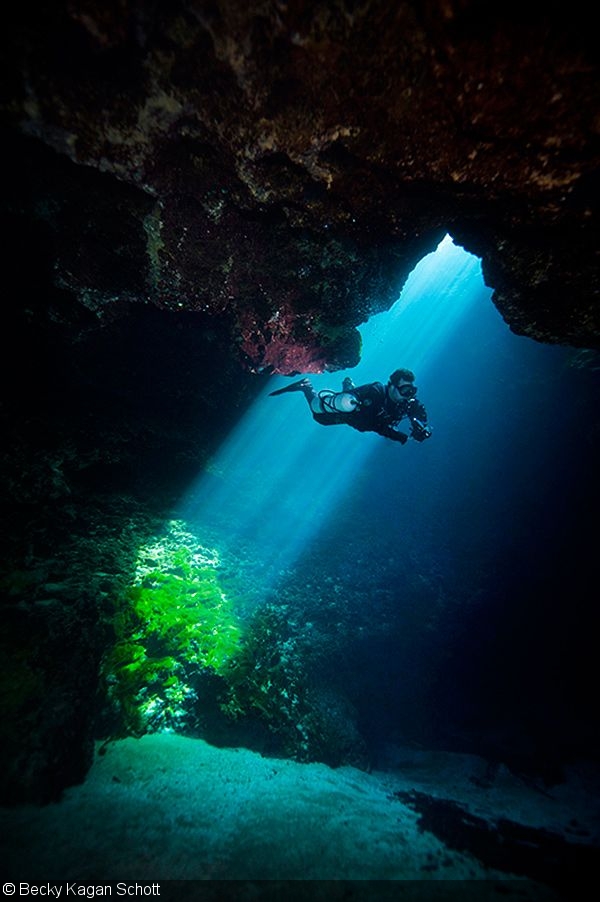 BKS: I’ve been non-stop for the past five months and we’ve got a lot of great projects coming up. I am working with MacGivillary Freeman Films on a cave shoot for an upcoming TV series, along with some commercials. I started teaching technical diving again last year, so I also have a few upcoming classes I’m excited about.

To find out more about Becky Kagan Schott, visit www.LiquidProductions.com. You can also watch the CBS cave diving series here. 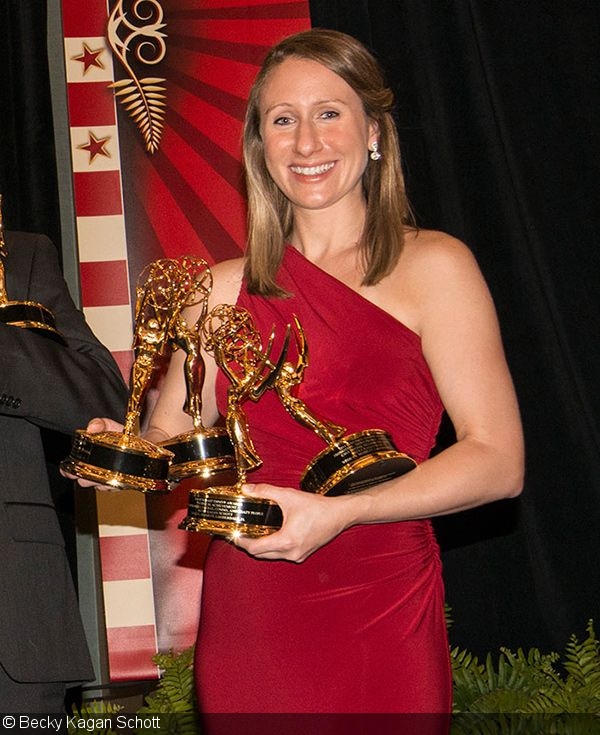