Every year in early October the humpback whales initiate their migration from the polar waters of Alaska to the warm waters of Hawaii, where they stay until late April or early May. They swim about 3,500 miles non-stop for about five to eight weeks.

Hawaiian waters offer a whale sanctuary with laws in place to protect them from harassment. It is unlawful to approach a whale any closer than 100 yards. Eighty-percent of the whales that come to Hawaii stay around the waters off Maui to mate and give birth. The relatively warm waters make ideal conditions in which to have their calves. However, since these islands are in the middle of the Pacific, the waters lack the nutrients the whales need, so the whales have to fast and live on their fat reserves. 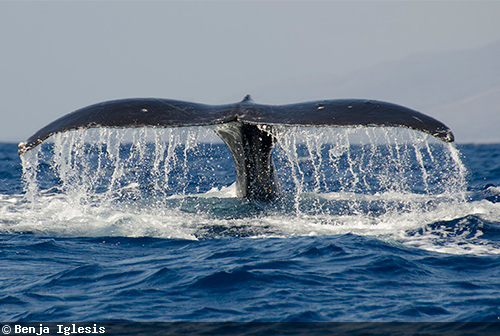 After the season is over, around April, they begin their journey back to Alaska to feed and rebuild their supply of blubber. The long summer days in Alaska are ideal for photosynthesis, which is why their waters are so green and full of nutrients for the whales to feed.

Hawaii is an ideal place to see these big cetaceans. While there are laws to keep us from approaching the whales, there are no laws against the whales approaching us—except the laws of Nature and luck! I have been scuba diving in Hawaiian waters almost daily for the last 13 years. I spend about 40 to 50 hours a week on, or in, the water. Whether you are kayaking, swimming, scuba diving or snorkeling, if you are patient and put in enough hours on the water, you just might get some amazing encounters.

Even with the increasing number of whales and the immense amount of time I have spent in the water, my underwater encounters with the whales had been few and far between. I am always waiting, watching and hoping, but more often than not, our encounters are watching their antics of spy-hopping, breaching, pectoral waving and tail slapping from the boat. Even when the whales can’t be seen, however, their “song” can heard while swimming and diving, reminding us of their presence. 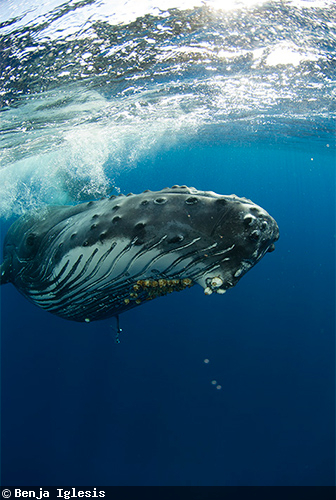 This year, right at the beginning of whale season, I was on a dive site known as the South Finger of Nahuna Point on the south coast of Maui. It is named this due to two ridges of rock that extend out into the sand channel. While looking to capture some photographs for my personal stock, I was in 40 feet of water on a clear day with about 80 feet of visibility. I was just looking around, enjoying the dive, with not much out of the ordinary happening.

I glanced out toward the deeper blue waters and saw a shadow in the distance that I thought was a manta or a big shark. As it came closer into view, I realized it was a whale! I froze. This big, 40-foot animal approached quickly and was now going past me, just in front of my eyes, fast!

I looked down for a second to set up my camera, hoping to catch a shot before the whale passed. Then, out of the corner of my right eye I saw something else big coming only a few feet from my head. I looked up and an entire competition pod of seven male whales began passing right over me! Without even thinking, I just put the camera up and started shooting with one hand on the camera and the other on my mask.

While the ocean is huge, sharing 40 feet of water with seven 40-foot long whales makes the whole thing feel pretty small, especially me! It all happened so fast; I got 14 frames in before they where gone. My heart was going a thousand miles a minute and my brain was trying to process what had just happened. They had been so close I could have touched them if I had lifted my arm. The sandy bottom was still all churned up, looking like a sand storm on the Sahara Desert. Two minutes later it was calm and the water was clear again, like nothing had ever happened. 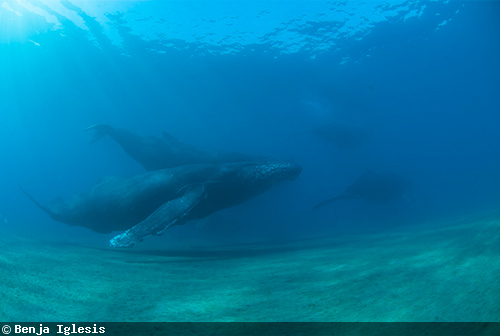 I started looking at the images on my screen and thinking I had to be the luckiest guy in the whole world when a thought came to my mind. They were swimming toward shore, toward shallower water, so they would have to move back into deeper water eventually. So I set my camera up for the right aperture, hoping that if I were lucky enough to have that ever happen again, I was going to be ready the next time!

As soon as I looked up from my camera, I could see the shadows. This time I knew what they were, but I didn’t expect them to make another close pass. However, that is exactly what they did! Camera ready, all I had to do was swim backwards so as not to get run over, a pretty tricky thing to do, especially with my heart pounding! I managed to get some amazing images and have a great story to tell. 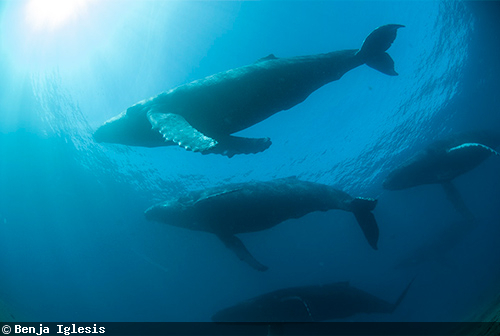 The chances of something like this happening on a dive, much less in 40 feet of clear water has to be something like one in a million. To have it happen twice in the same dive, well, unbelievable.

Read part 2 of Benja's amazing encounters with humpbacks in Hawaii.