From The Field: Sailfish With Amos Nachoum
January 20, 2008 @ 02:00 AM (EST)
by Amos Nachoum
I am speechless again in face of what Sailfish showed us today on the first day out. It was one of those dream mornings and all day too. The sun was shining over flat, calm seas. We left port at 6:31am and about an hour and a half later we were in the water.

For the next 40 minutes we were chasing the bait ball of Sardines, which in turn were also 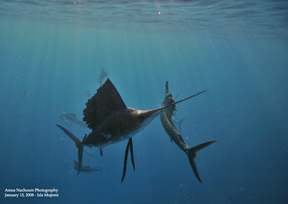 being chased by at least anywhere between 40 - 50 Sailfish, not to mention the  numerous frigate birds attacking from the sky. We were only snorkeling. The action was moving and moving fast. All four of my guests were kicking as hard as we can to keep up with the ball of Sardines. The light was golden, and the rays were dancing and slicing through the clear water. Light reflecting off the amazing and startling geometric patterns on the Sailfish bodies created a special shimmering throughout the open water. I had a chance to expose at least 200+ frames on my new digital system. At about 9am the Sport Fishing fleet has arrived and we decided to leave...but only because we got the word from a fishing vessel that there were are at least 4 Whale sharks in the area. We snorkeled with them too for about an hour. 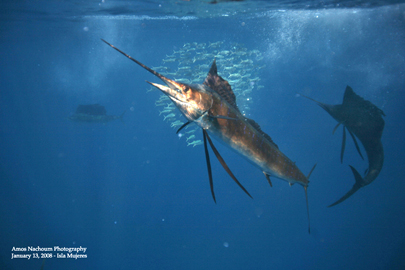 The rest of the day we were in search mode, like in Savanna in Africa – from 10 AM until about 3PM the wildlife finds refuge somewhere we can not see them. At about 3:14 we were ready to turn back home as tiredness start to creep in. But then, our skipper Rujillio saw the bird funnel again and we rushed to the action ahead of all the sport fishing vessels. We got back in the water and had a short five to seven minute fast moving encounter. 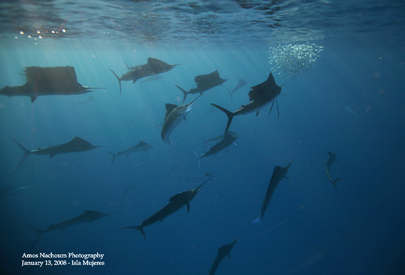 That was our first day and I am not sure what our skipper, me or the sailfish will do for an encore. We are going to be here for six days – oh yes the weather – tomorrow is predicted calm in the morning and by the afternoon a north wind creeping in with rain. That could chase us out of the water. We shall see, and until then, we're going to get up tomorrow at 5am and leave just before day break for a few more sizzling and exciting dives in the clear blue water off Isla Mujeres. So now we are going for dinner...and a cold beer too. We have big plans for next year. Amos is hosting several 4-person Sailfish trips in 2009, visit his website - Biganimals.com. 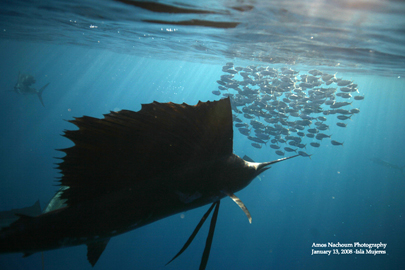 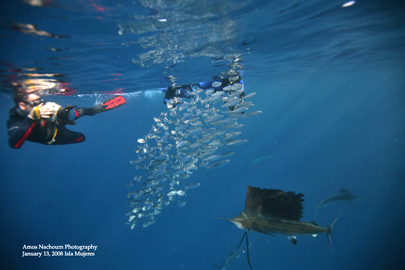