The first time you see a frogfish, it is easy to see why it is one of the most unique animals found in the sea. Anyone who has seen one of these languid bottom-dwellers is sure to stop and ponder what strange evolutionary process was at work to create them. Even the brightest and most elegantly adorned frogfish somehow manages to blend in perfectly with their surroundings. Only when hit with the light of a strobe or torch do they reveal their true and sometimes stunning colors. Some have fleshy skin flaps that mimic algae, while others are covered in a warty texture similar to sponges or rubble. Others are completely smooth, with amazing patterns that bear a striking similarity to the surrounding corals.

One cannot help but love frogfish. They never cease to amaze me in their infinite colors, patterns, and un-fish-like behavior. The family of anglerfishes is quite large, and only a small subset is represented here. This article will deal with some biology, but will mainly focus on capturing great images of these fascinating critters. 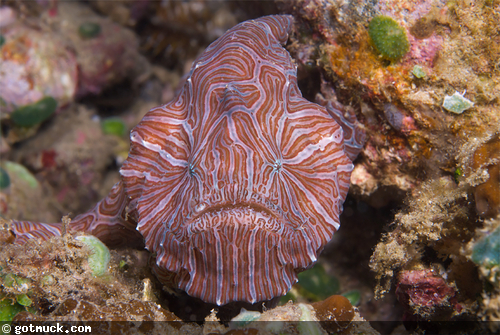 Frogfish are members of the family Antennariidae. The typical frogfish has a wide, oblong body with a rounded face and upturned mouth. They spend their lives “walking” on the bottom using their pectoral and ventral fins, which behave more like webbed feet than fins. If the need arises to swim, they suck in water through their massive mouths and eject it from their gill holes located behind their head, jet-propelling themselves across the bottom. Certain species, such as the sargassum frogfish, spend their lives amongst floating sargassum and detritus as well. 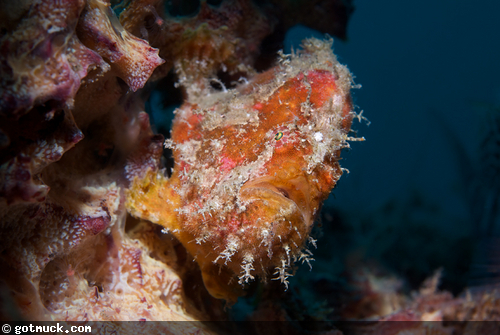 Another distinguishing feature of Antennariidae, and the one for which they receive their family name, is their lure (or “esca”), which sits atop a modified dorsal spine called the illicium. The length of the stalk and shape of the lure run the gamut from pom-poms to wormlike white tufts. The anglerfishes wave this lure as they remain motionless near their prey. Attracted to the tasty looking lure, their prey are then swallowed whole as the frogfish literally stretches its mouth to the same size as its body and inhales the doomed fish.

Frogfish are shallow water fish, living in a variety of substrates from algal flats, to rock strewn slopes, and sandy plains. There are over 41 species worldwide, spread over both oceans. One species can have several extremely different color patterns, making identification from photographs difficult. Frogfish also vary greatly in size, from the size of your thumbnail to a slightly deflated soccer ball. They can perch themselves in uncanny positions and remain there for extended periods of time. Here in Lembeh, certain painted frogfish can be found in the same piece of sponge for weeks if left undisturbed and the food supply is abundant.

Frogfish are mostly found as solitary individuals in the variety of habitats mentioned above. Although fairly sedentary, frogfish can be seen roaming about their habitat, searching out prey or better cover. Often, they can be seen in pairs or larger groups during mating events. Certain aspects of frogfish behavior tend to lend themselves better to photography than others, and those will be discussed below. Overall, the variety of behaviors, colors and patterns, and environments that you find frogfish make for ever-changing photographic possibilities for those with the patience to capture it. 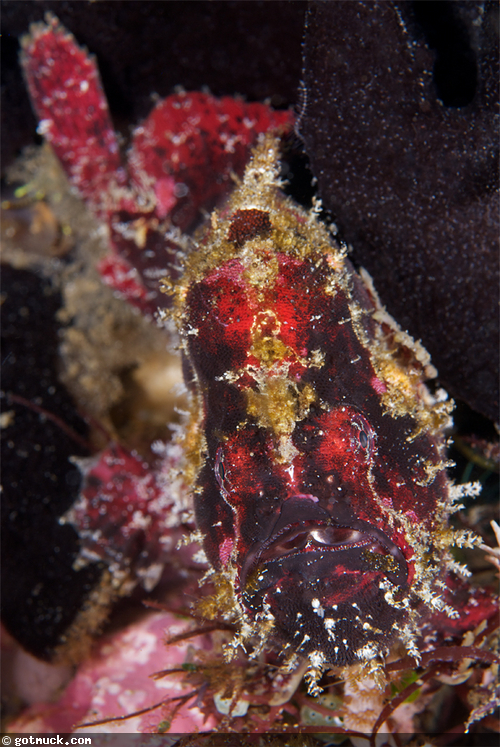 Recently, there has been mounting pressure to induce certain behaviors in frogfish such as yawning, feeding, or swimming. I will not discuss the techniques employed to achieve this behavior as I don't want anyone to try it! All the behaviors can be observed naturally and need not be induced. As with all other undersea creatures, respect for their well-being takes precedence over a photograph.

The 60/50mm macro lens seems to be the most effective at capturing 90% of frogfish seen on a dive. They are generally fairly sedentary and easily approachable, negating the need for a longer focal length lens. Some frogfish are actually large enough to warrant the use of a wide-angle or CFWA (close-focus wide-angle) setup. In either case, a flash is key to achieving good results, as these animals tend to blend very well into their surroundings under natural light conditions. To separate the animal from its surroundings and to bring out their colors, artificial light is necessary in most cases.

No special gear is needed for compact camera users, as the size of your average frogfish generally falls into the acceptable range for the camera’s “macro” setting—or even wide angle depending on the subject size. A flash is necessary for the same reason mentioned above—to separate the animal from its environment and bring out its true colors. 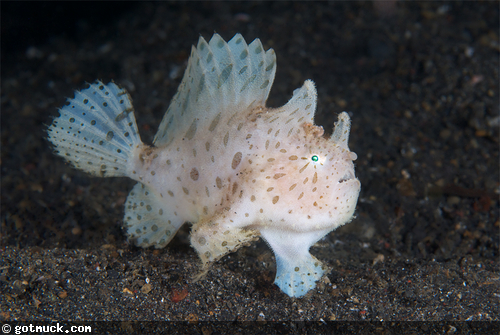 One of the most difficult aspects of photographing frogfish in their natural setting is their amazing ability to camouflage. Most species tend to blend exceedingly well with their backgrounds, making a photograph seem flat with an unclear subject. Several techniques are available to the photographer to overcome these obstacles.

You can use a single strobe, or a higher ratio between two strobes to cast a strong shadow. This will make the subject “pop” from an otherwise drab backdrop. 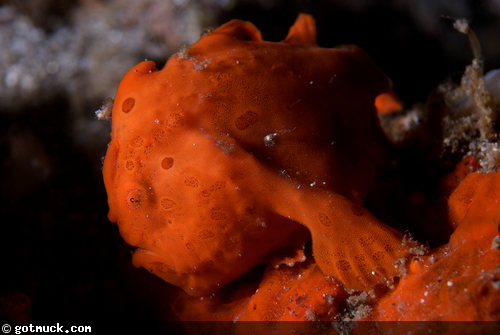 Using a snoot totally isolates the subject, making it the clear focus of the image. The strong cross lighting caused by snooting can also bring out lots of detail in the frogfish’s textured skin which is lost in a dual flash-filled image. 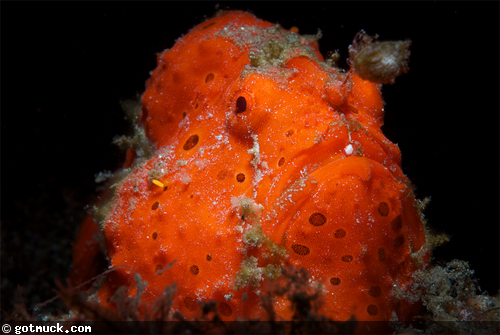 By using a lower aperture, only a very narrow plane of focus highlights certain areas of the animal to the viewer, blurring the rest of the boring background. 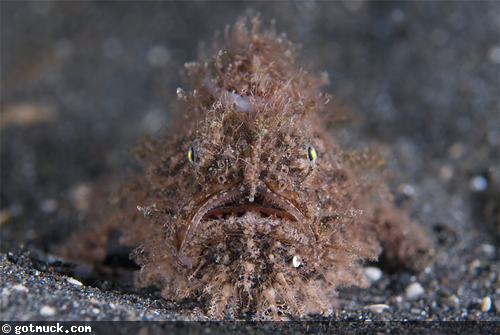 In some cases, mostly for those species that frequently inhabit sponges, aiming up and using a very low shutter speed (less than 1/40 sec) for blue water and very high shutter speed (the sync speed of your equipment, usually around 1/200–1/250 sec for DSLRs and higher for compacts) can create an interesting frame around the subject. 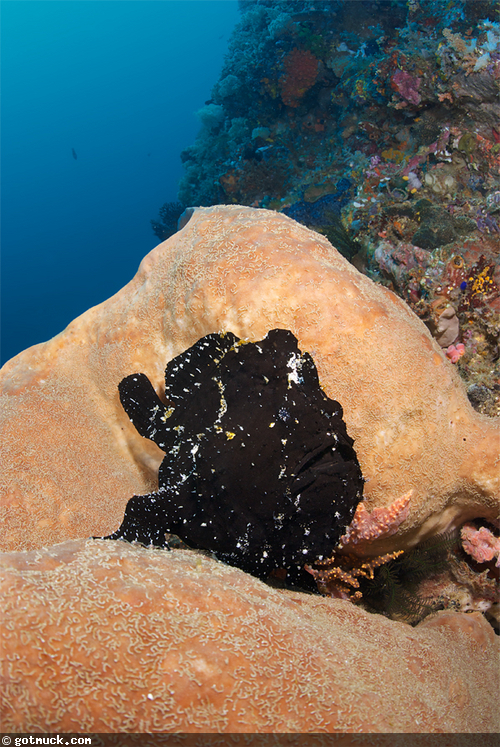 In some cases, the background may be complimentary to the subject, even if it does not seem to be at first glance. Ropes, sponges, even garbage (yes, garbage, an unfortunate yet ever-present sight at dive sites all over the world) can make for an interesting backdrop if done right. Sometimes, showing some of the environment can make for a more vivid picture and can give the viewer a better idea of an animal’s natural habitat—or not-so-natural habitat, in the case of mooring lines and plastic cups. 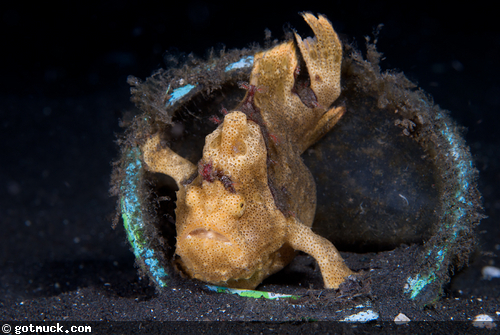 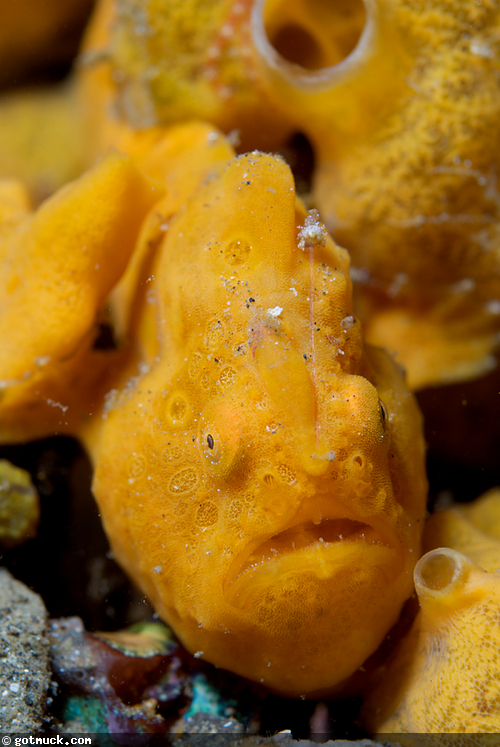 Go for the Face

Frogfish have extremely expressive faces, with beautifully colored eyes, artistic skin patterns, and their perpetual frown. They are also not generally threatened by photographers, allowing you to get close and get a good full-frame portrait. 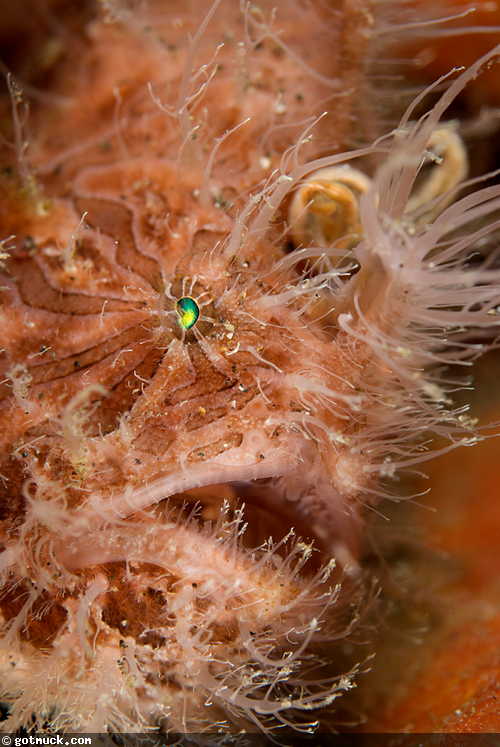 These are often the most controversial. As mentioned above, several illicit techniques have evolved for getting feeding, yawning, and swimming frogfish images. Patience, however, will usually get you the same behavior, just not as often. When it does happen, it can make for lively images. The trick to getting the shot is to have the camera on manual focus and leave enough room in front of the frogfish to capture the action. 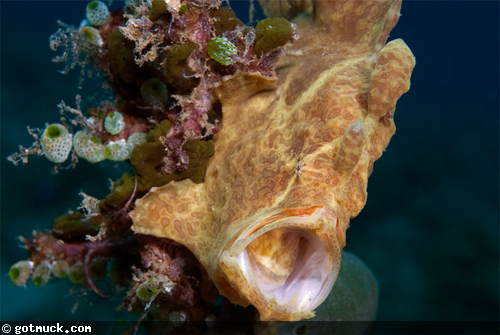 1. Get low: Getting at eye level with a frogfish can result in really stunning shots that really convey their benthic lifestyle.

2. Take your time: Frogfish are not generally in a hurry and are not easily disturbed by normal diver behavior. Take your time to get in close, frame your shots properly and adjust your lighting. This will reduce the number of pictures you end up throwing away later and leave the frogfish in a less stressful state.

3. Check the histogram: Many frogfish have one dominant and extremely saturated color. Watch that color’s related channel on the RGB histogram to make sure you are not losing all the detail in that region.

4. Be patient: If you want behavior shots you have to put in the time. I have sat for an entire hour and twenty minute dive on one frogfish, only to have it finally yawn as I lower my camera to return to the boat. Nature is cruel to the photographer sometimes, but no shot is worth harming the subject.