In this latest article in The Guide, DPG talks to renowned wildlife filmmaker and photographer Cristian Dimitrius. 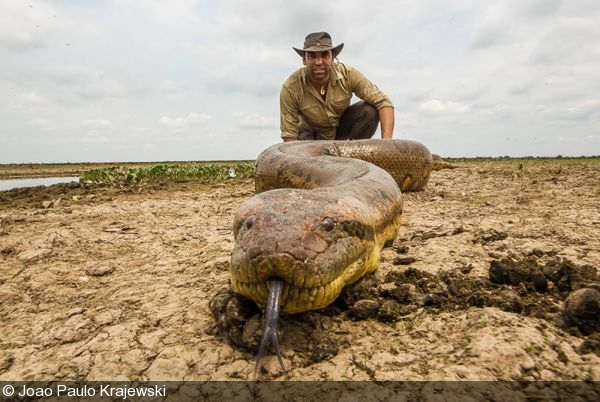 Wildlife filmmaking is my passion—what I was born to do!
—Cristian Dimitrius

DPG: As a wildlife filmmaker, do you prefer shooting on land or underwater?

Cristian Dimitrius: I like both! First of all, my passion is being in Nature, no matter whether I’m camping, hiking, climbing, diving or chilling out on a pristine beach. But, of course, I have a very deep relationship with the ocean. I am a PADI dive instructor and began my career as an underwater cameraman, filming my students and clients during dive trips. I have to say that if I spend too much time without diving, I feel the need for compressed air… I can’t help it—I am addicted to it! 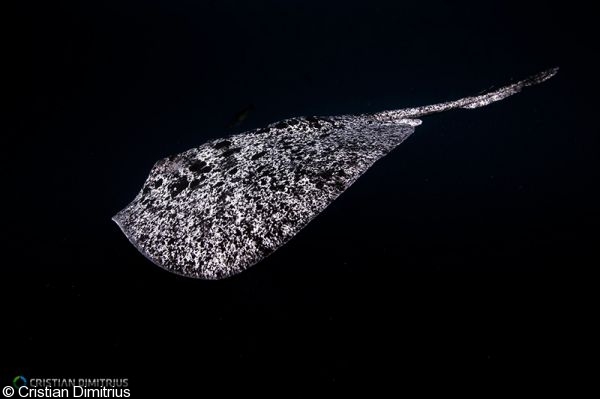 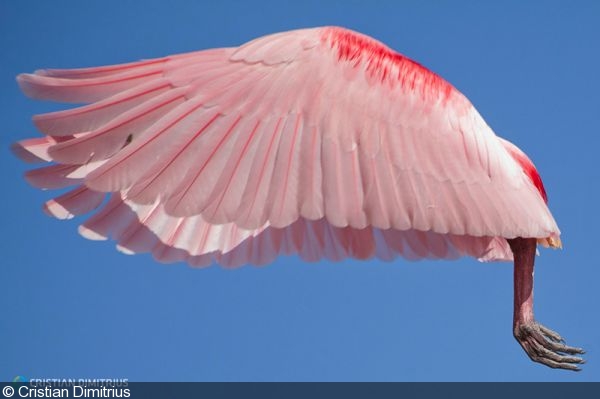 DPG: Tell us a bit about what you do.

CD: As a wildlife cinematographer and photographer specializing in natural history, my goal is to get the job done for my clients, which means getting the shot they need to tell a story—especially something that’s never been filmed before. I have worked for the BBC (Wild Brazil series), National Geographic (Untamed Americas, Urban Jungle, Untamed Wild Brazil, Jaguar: One Strike to Kill, Secret Brazil), Discovery Channel (River Monsters), and many others.

I am also a TV presenter in Brazil: I have a segment called “Domingão Aventura” (Big Sunday Adventure) on a popular Sunday afternoon TV show. I have the opportunity to bring Nature and conservation to the many people who don’t have access to it—on a good day, we can reach up to 50 million people. I always try to be innovative, using the latest cameras and new technologies.

My work has given me so many great opportunities for big encounters with animals, like diving with crocodiles in Botswana; lions, elephants and hippos in Africa; eagles in Mongolia; polar bears in Canada—the list goes on and on. It sounds like a dream life, and it is—at least for me! But it sounds more pleasant than it actually is, and it’s definitely not for everyone. But it’s my passion—what I was born to do! 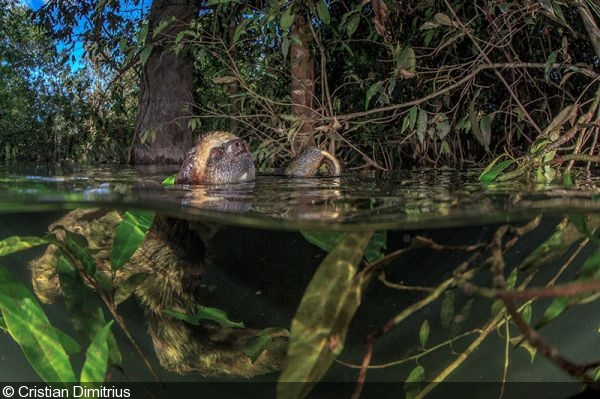 A swimming sloth cooling off in the Amazon, Brazil 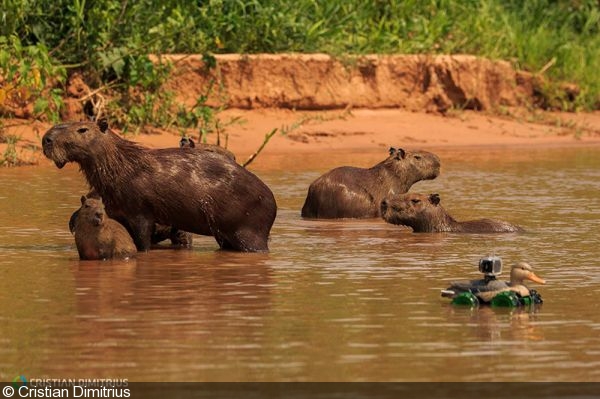 DPG: How did you get into film?

CD: The first part of my life was dedicated to becoming a Nature expert, to feeling comfortable in wild environments. Film came later. As I mentioned, it was underwater that I shot my first scenes, filming students and clients, and this was my occupation for years. Later, I took some courses, bought a new camera, and started to approach the production companies in Brazil. But it was, and is, a very competitive market.

So, back in 2006, I decided to create my own projects and start building a career. I created a blog and started writing daily diaries about my videos and my travels. I traveled for a month in Mexico and documented everything on my blog. I got the attention of a very important magazine in Brazil and, for the first time, I was publishing articles—that was the beginning of my filmmaking and photographic career. When I finished the Mexico trip, I immediately got a job at a production company in Brazil specialized in documentaries. I was “in”! 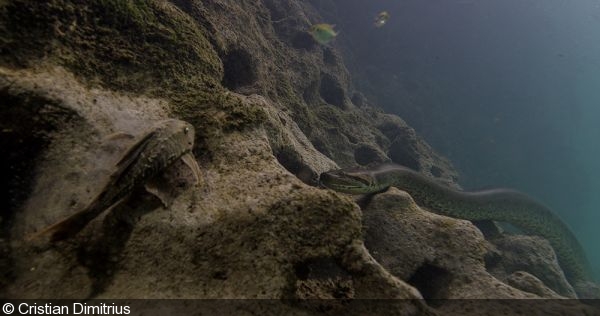 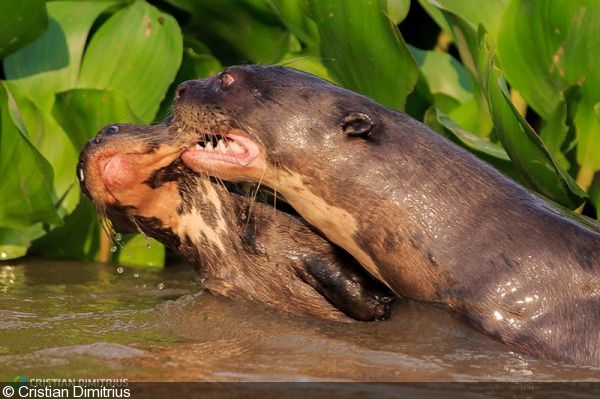 DPG: I have seen photos of you hidden under camouflage nets and other contraptions. How do you stay very quiet and still for long periods of time in order to get the shot?

CD: To photograph wildlife, you need to understand the environment and the behavior you want to film, and try to predict when and how it will happen. Sometimes we wait for days, weeks, months even. You need to be patient—or just be good at being bored. Sometimes you can get lucky and don’t spend that much time getting the shot… but it’s a long and arduous process most of the time. In short: know the place, know the animal, pick the right equipment for the job, use local knowledge, be ready, be focused, and be patient.

DPG: Coolest interaction with an animal?

CD: For me, the coolest interactions are with marine mammals, especially sea lions—they are such a joy for any diver in the water with them. I’ve had similar experiences with giant river otters in Brazil, but they are much more elusive, and the water conditions are far from ideal. Another animal that I love to interact with is the manta ray—magical! 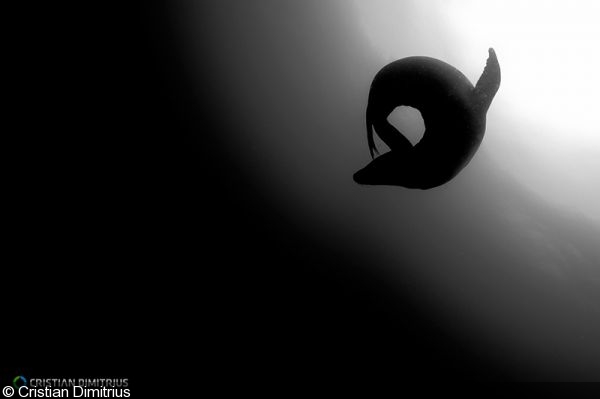 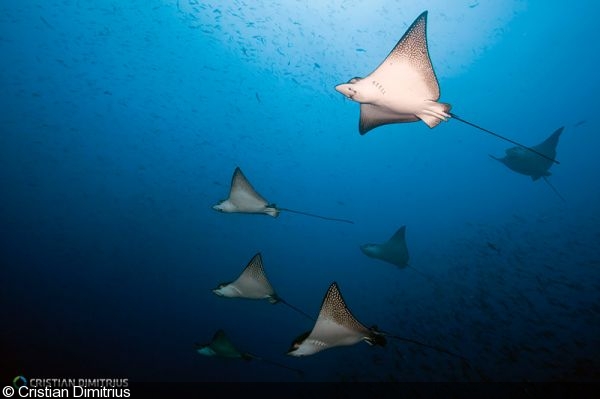 CD: I once got lost in the waters of the Galápagos and drifted for about an hour by myself. I has holding a big camera in my hand and using a drysuit, which made the swimming even harder. Below there were lots of silky sharks. It was a huge relief finally seeing the boat. One hour after being rescued, I was back in the water, but I was much more careful. I had learned my lesson.

With animals, you need to be very good at observing body language. Diving with crocodiles in Botswana could be a pretty scary and dangerous experience if you don’t know what are you doing. But with a good guide, respecting the animals, knowing your limits, following safety protocol—then it can be an unforgettable experience. Sharks are the same: I love being in the water with them and have never had a single problem.

CD: That’s a very tough question! An animal I have never seen in the wild? Of the ones I have filmed, some of my favorites are in the water: giant river otters, sharks and crocodilians. I also love filming birds of prey and big land mammals. 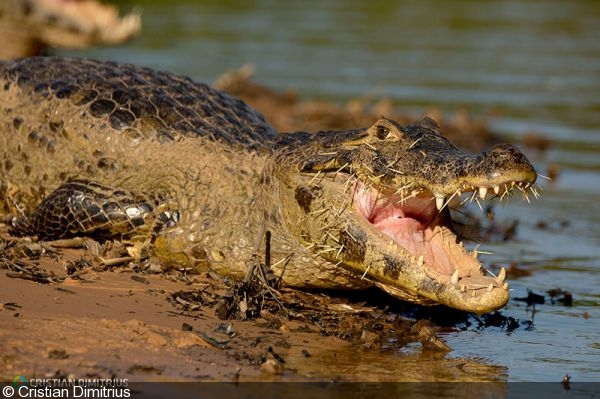 A cayman after eating a porcupine—the expression says it all! 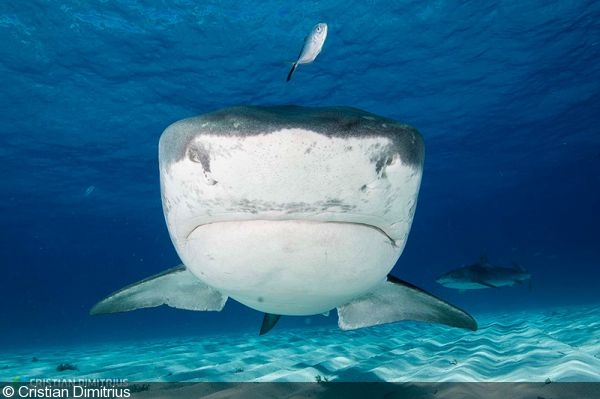 A tiger shark in the place Cristian calls his second home, the Bahamas 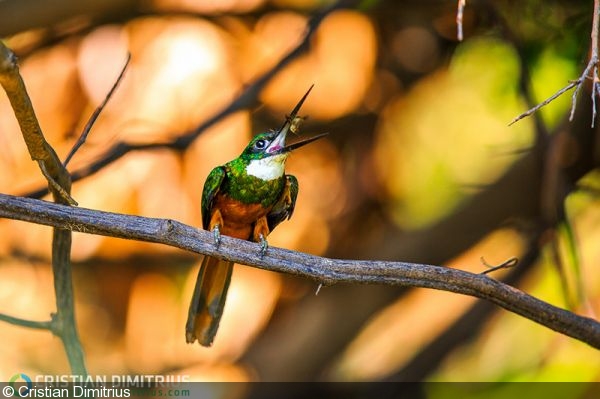 A rufous-tailed jacamar getting his dinner

DPG: How much gear do you cart around?

CD: It depends on the assignment. For a big project last year for National Geographic, I took more than 20 cases to the Amazon, including cameras, lights, scuba gear, tents, booms, sliders, a generator, and so on. If the project involves shooting on land—if I’m not taking toys like remote cars, drones, or hidden cameras—I might travel with only four pieces of luggage. 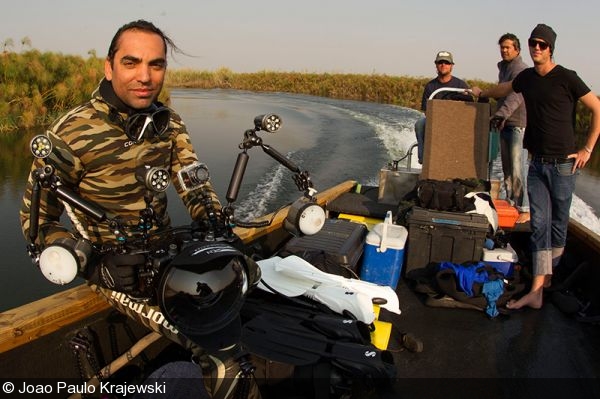 On expedition to film crocodiles in Botswana 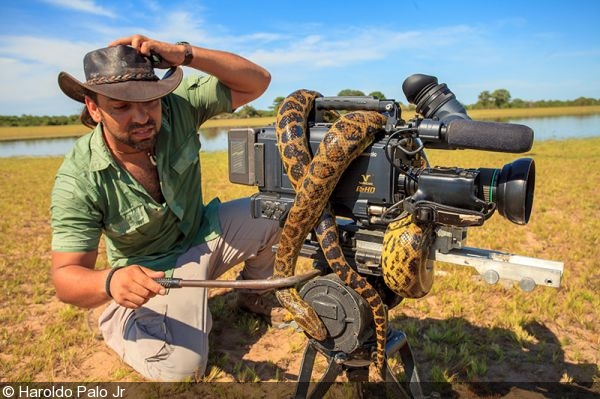 DPG: On an average assignment, how many hours of footage do you shoot?

CD: Another hard question. It used to be more, but now I’m shooting mostly with the Red Dragon, which is very gigabyte-hungry. On a 512 GB card, you can usually record one hour in 6K resolution with low compression. So, I need to shoot only what I really need—I would say half a terabyte per day, about an hour day. With other cameras, like the Canon 5D Mark III or an ARRI, I tend to shoot more, sometimes double that, on a good day. But there are days when nothing much happens and I don’t shoot much.

DPG: Do you process and edit your own material?

CD: For my segment in Brazil I do everything: research, production, shooting, directing, editing, and presenting. We have a great team at the TV station, and a very good friend and also a good cameraman travels with me for most of the trips.

For big productions like those for National Geographic, I don’t edit, but I still process most of the footage, cleaning out unwanted stuff out before sending. This saves the editors time, though it’s not always requested. When I have time, I always do it anyway. 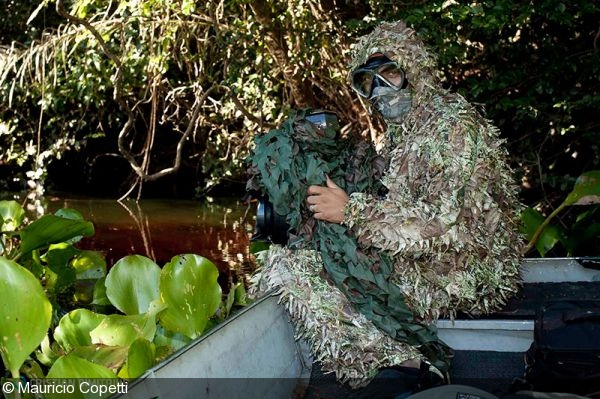 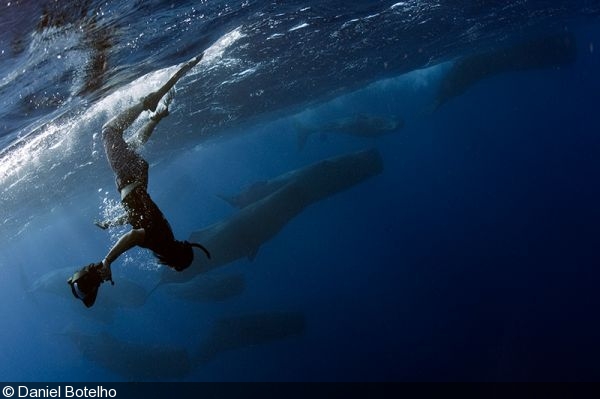 Swimming into a huge pod of sperm whales in Dominica 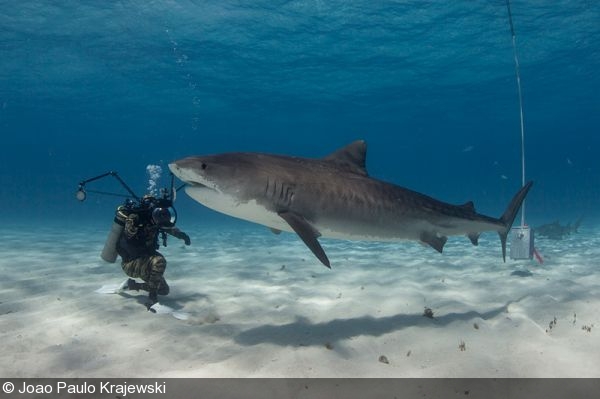 CD: Yes, always! Next year we have various adventures planned for my TV show, including bats, wild dogs, crocodiles, hippos, and killer whales. Plus, a brand new series for cable TV is coming up… but that’s top secret! I’m also working on some exhibitions and educational projects in Brazil—taking Nature to shopping malls, schools, and public places.

CD: I believe people like me do what we do because of our love for Nature. My mission is to inspire people to fall in love with our planet, and arouse the desire for knowledge and conservation. The planet—especially the ocean—needs our help, and I try to encourage everyone to take action. Be an advocate for Nature, spread the world, spend more time in the wilderness, dive more, take more pictures and share them with friends and relatives, demand policies from our politicians that protect Nature. We’re living at a crucial moment in history and Mother Nature needs all of us working together.