For a few months now the small Philippine village of Oslob has created quite the controversy.

The town’s main attraction is the hand feeding of small shrimps to whale sharks by local fisherman. All this attention has made a once sleepy town into a tourist hotspot almost overnight. Opinions about the controversial feeding vary greatly, and while some want to ban the feeding, others believe this is an amazing alternate income for the town. 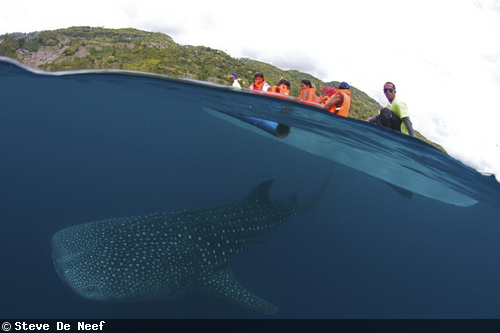 While the whale shark feeding at Oslob looks amazing, it remains very controversial

The Origins of Feeding

As I live very close to the whale shark madness of Oslob, I’ve managed to spend a lot of time talking to the locals. Although I’ve heard a few different stories, most fishermen are telling the same story on how the whale sharks came to their shores and how the tourist attraction came about.

The fishermen here have been using uyap (small shrimps) for years as fishing bait (not fishing for whale sharks or mantas). The uyap is caught at night, and then during the day the fishermen use these shrimp to fish. As whale sharks do pass by this area from time to time, it’s not very surprising that they are also after the uyap, which is a big part of their diet.

The fishermen have seen whale sharks here for years; and while at times there weren’t but a handful of sharks left, there now seems to be more and more. Most fishermen in the Philippines see the whale sharks as a pest because when they eat their bait, they scare away the small fish they are fishing for. 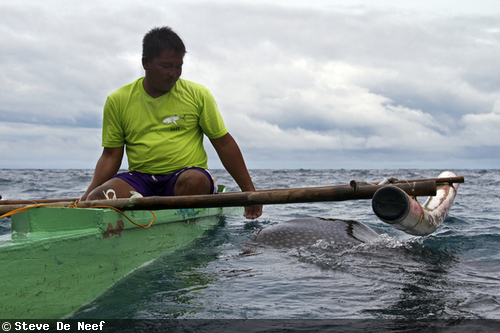 A whale shark locally known as “Tuki” following a fisherman

I’ve heard all sorts of stories of how some fishermen tried to get rid of the whale sharks—some would pour rocks in their mouths, while other would stab them. There is also a stigma that harming the whale sharks would bring bad luck. Instead of hurting the bus-sized animals, one fishermen would lead them away with a trail of shrimp while the others could go on and fish.

One fisherman in Oslob was quite keen on the whale sharks and would give them snacks from time to time to keep them happy, as he believed this would bring him good fortune. It’s nice to see that they looked at ways to avoid hurting the whale sharks and even protecting them while still being able to make a living.

Oslob is not too remote, so soon local dive shops offered the fishermen some money to take them to the tuki (local name for whale shark). The fishermen soon realized this was a great opportunity to make some money and stop fishing for a while. News of these whale sharks spread quickly, and this was the start of the tourism in Oslob. As Oslob is only a three-hour drive away from the big city of Cebu and a one-hour boat ride from the dive shops in Dauin, it’s not surprising to see hordes of tourist arrive every day. 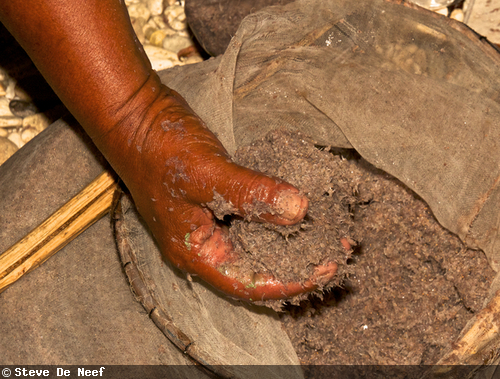 Uyap, the small shrimp that attracts the whale sharks

Fishermen and the government are trying to control the situation with regulations, including turning the area into a sanctuary. The sanctuary is basically a zone where no motorboats are allowed to come in, although it’s not an official sanctuary yet. I’ve seen people fish in it on occasion, but the latest news (as of March 2012) is that a real MPA (marine protected area) will be established soon.

There are some basic rules that apply to the whale shark interaction: no touching, no flash photography, 30-minute interaction per group from the beach and one hour for the people on the dive boats, stay within a safe distance (three meters), don’t come between the food and the whale shark, and a maximum of six people or one boat per whale shark. 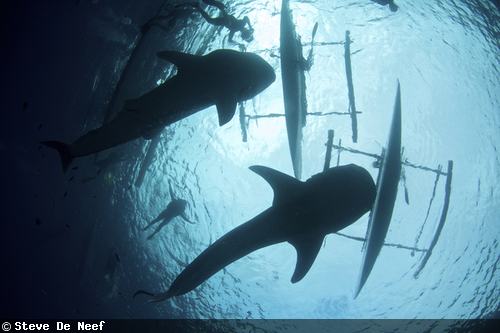 The underwater crowd of Oslob, this would be an average day

While these rules are effective in theory, I have yet to see them implemented properly. I’ve seen the fishermen telling people off when they get too close or touch the whale sharks, but the numbers in the water are far beyond six per whale shark. Last time I was there, there were at least 15 divers and 30 snorkelers surrounding only two juvenile whale sharks.

It’s not uncommon to see five boats around one whale shark well within three meters of the animals. On one particularly busy day, over 1,000 people visited and interacted with the whale sharks. Not only does this get hectic in the water; but the town is having trouble managing the waste this kind of tourism brings with it. The feeding starts at six and ends at one o’clock, so it’s around eight hours of interaction time.

Tourism has really changed this small town—it’s like they found gold overnight. But only time will tell if this newfound tourism will be sustainable or not. 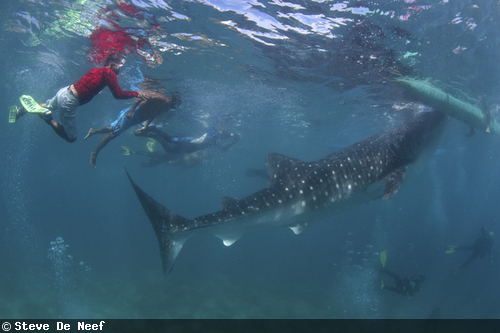 Snorkelers gathering around a whale shark

The biggest controversy surrounding the whale sharks is the hand-feeding of the small shrimp to keep the animals in the area. While it’s a big step forward from hunting them, it’s still a long way from a beneficial situation for both whale shark and fishermen. Some of these fishermen hunted the gentle giants 15 years ago before Philippine law was enacted protecting whale sharks. This legislation has helped restore whale shark numbers in the area, according to the fishermen.

Whale sharks have been protected in the Philippines since 1998, and any catching, harming or selling is prohibited. Hopefully, this is why their numbers are up—even other parts of the Philippines have also been seeing more whale sharks. Unfortunately, there are still reports of these creatures being hunted. Only about two years ago a whale shark without its fins was found close to Batangas. 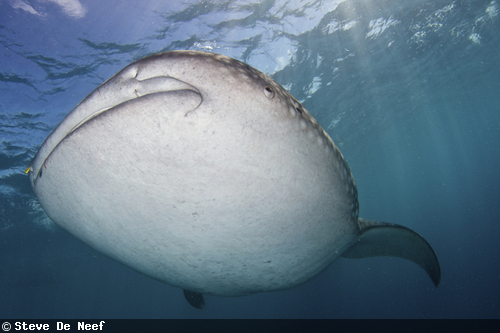 The problem with the feeding is that these wild animals are migratory and suppose to move with to find food. Right now, the uyap that was used as bait for the whale sharks is gone. This normally means the whale sharks should migrate. However, the fishermen are now buying different shrimp from other areas to keep the business running.

Even though the whale sharks are not kept in captivity, the food handout seems to keep some of them around full time. It’s hard to tell what will happen if they don’t migrate. There’s only about 13 different individuals that have been identified, and none of them have ever been photo ID-ed in another place before.

The positive side of the whale sharks being here is that this is a great opportunity for research and to gain more knowledge about the biggest fish in the world. As of now, the main means of whale shark identification has been though photo ID. Attracting tourists is also a way to educate a larger population about the gentle giants and conservation efforts. 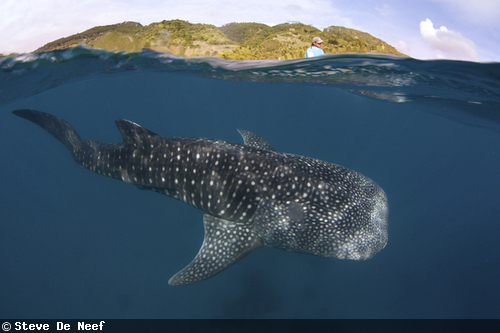 Another big issue with the feeding is that the animals have come to associate the boats with food. While the fishing boats in Oslob don’t have engines, this could still be dangerous if they come up to motorboats when they do migrate. One of the whale sharks here has been struck by the propeller of a dive boat and wasn’t seen anymore after the incident.

Another one was speared and also went missing. While it’s not clear who speared the whale sharks, some of the locals told me it was done by neighboring fishermen out of jealousy, as they weren’t allowed to partake in the money making. 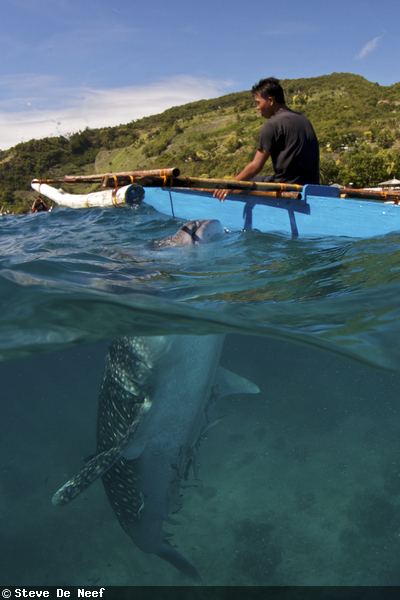 While it is great to see fishermen care for these animals and wanting to protect them, there are other ways of doing that which would cause less impact on the whale sharks and still allow for a tourism industry.

The fishermen do care for the whale sharks and are trying to protect them. Hopefully over time tourism here will become more sustainable.

Environmental groups and biologists in the Philippines have given advice and alternative solutions, but so far none has really been considered. The primary solution would be to stop the feeding and instead do patrols with a boat to find the animals as in other whale shark hotspots. This would leave far less impact, but will most likely not be as lucrative. Dolphins and other cetaceans frequent this area as well, and could become part of the tourist industry here.

NGOs are offering free advice and information to the fishermen and other stakeholders—hopefully this will lead to a better way of interacting with the whale sharks. 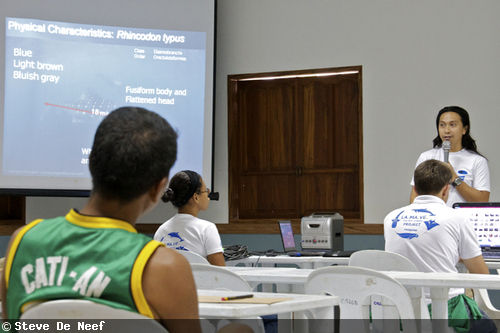 No matter if the feeding continues or not, I hope the numbers in the water will be better controlled. Further research and education will be necessary to produce a positive outcome from the situation. While I believe there can be an alternative livelihood in this for some of the fishermen, at the moment it just doesn’t seem sustainable. 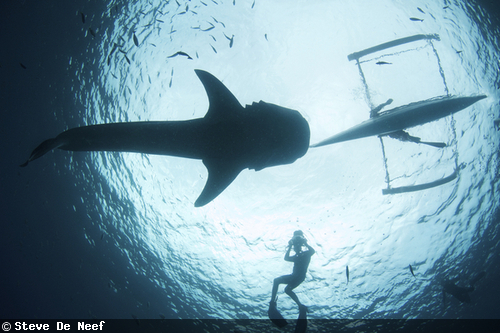 If you’ve visited the area and have some images of the whale sharks you can help research by uploading your shots to www.whaleshark.org.