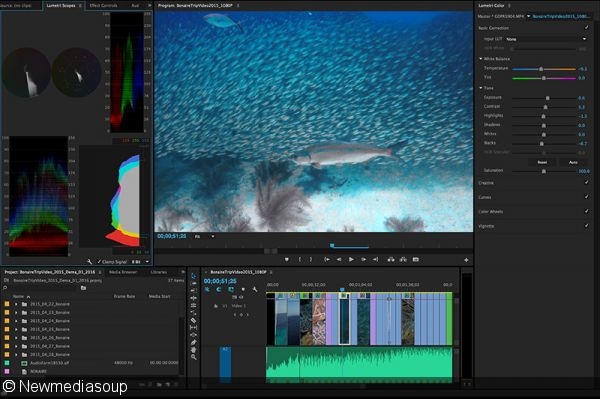 You’ve captured all of your epic dive trip footage using your GoPro. There are hours and hours of wide-angle, macro and topside footage all sitting on your hard drive. Now what? How do you make all of your hard work shine? The last thing you want to do is show unedited clips from your camera. Instead, make a finished product that you can be proud of and looks stunning! Here are some editing tips that will help you make a video your family and friends will love.

Making a decision about which video editor to use can be difficult. For most people, it comes down to price and how serious you are about being a videographer. 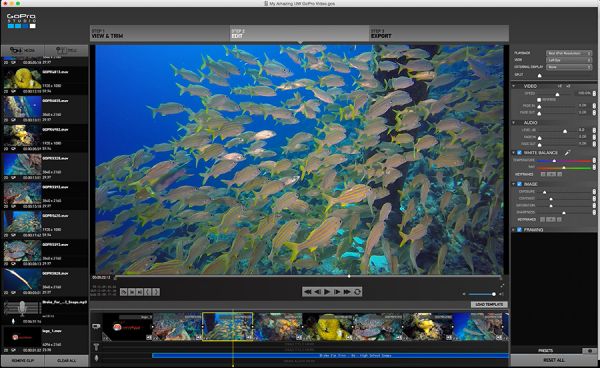 GoPro Studio is free and made specifically for GoPro footage 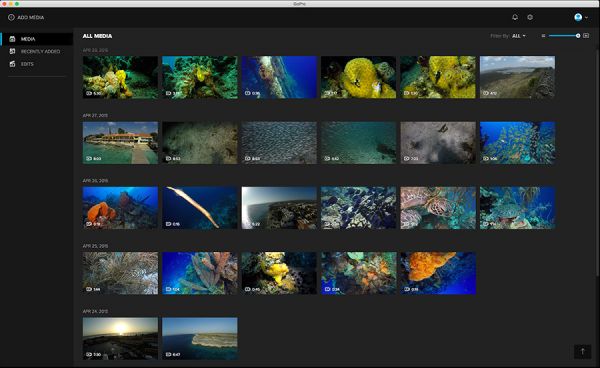 GoPro has just released the GoPro App for Desktop, which helps you offload your GoPro content into an organized viewer. Then, once you’ve made your selections, you can edit and export using GoPro Studio (included in the app download).

The Cineform codec is a very high-quality professional codec. When the footage is recorded on your camera, it is in a compressed MP4 file. Before GoPro Studio can edit the footage, it must convert the video to the Cineform codec. The downside of this is that you now have two files on your hard drive. Let’s say if you shot a one-minute clip of 1080p footage with your GoPro; you will have the first MP4 file that is ~500MB in size, and the second file in the Cineform codec will be almost 2GB in size! 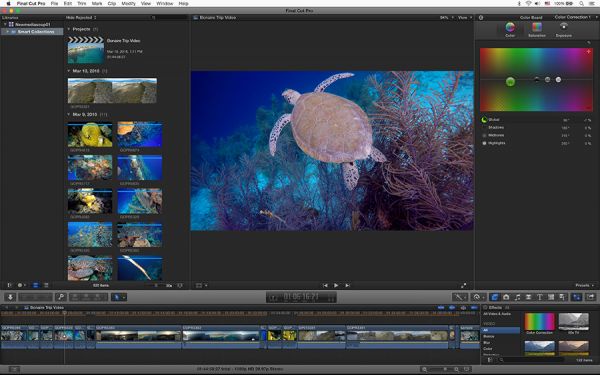 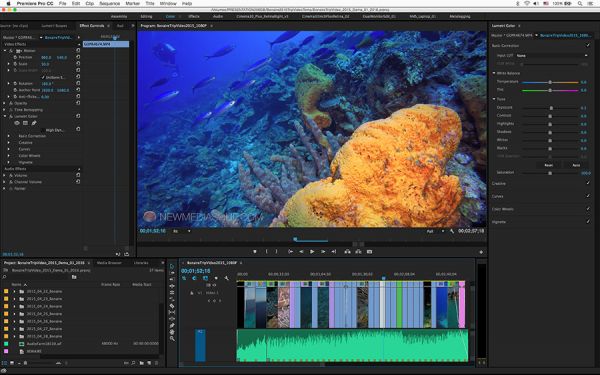 If you think you’re ready to have more control over your footage, apply more accurate color adjustments, and have a more professional software to work with, Apple’s Final Cut Pro X or Adobe Premiere Pro might be a better choice for you. Both of these applications also allow you to directly import and edit footage without transcoding—which we like because it’s faster. But the downside to this workflow is that older (slower) computers may have a difficult time playing back video previews in real time.

If possible, plan out your story before you go on your trip—even if it’s just “I want to show the beauty of the underwater world set to music.” Think about the types of shots you want, and plan for how you can get the shots to tell your story. If you have a focused story, like “I want to tell a story about the wrecks of Hawaii,” then more planning will be involved. Get as granular as possible in the types of shots you’d like to capture and how those shots will portray the story you’re trying to tell.

Below is a short video shot in Bonaire. It’s a broad story about how beautiful Bonaire is and some of the types of things you’ll see while diving. There’s also some footage shot with the GoPro while touring around the island.

Don’t forget to add some music. Having a soundtrack can really help enhance your video and provide additional interest. You see a lot of people using music from their favorite artists and bands, but the reality is that without written permission, you legally shouldn’t use it. There are many great resources online where you can either download music tracks for free or for nominal licensing fees. Here are some good resources for getting the perfect music track:

Use the Best of the Best

No one wants to see his/her hard-fought underwater imaging captures on the cutting-room floor. But most people’s attention spans are fairly short. You might have a bunch of amazing footage from different angles, and even the same awesome subjects from different days. Do your best to objectively choose which clips are the most engaging and compelling, and cut it down to only the best of the best. 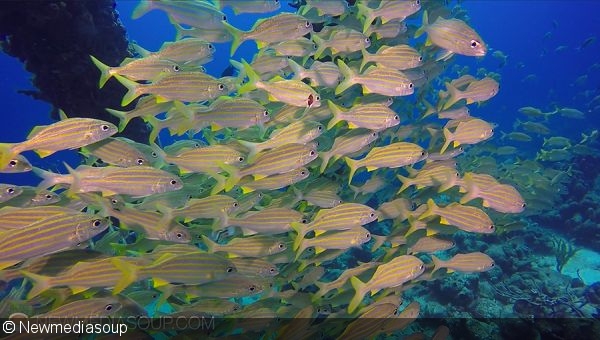 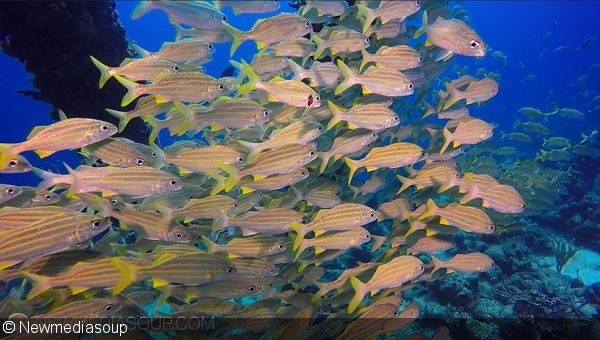 In all three video editors that we talked about above, there are color-correction tools. Why do we care about color correction? Well, sometimes you might have shot your video with the wrong filter on, or the GoPro poorly white balanced, or you were very close to your subject and your lights were too warm in the footage. Capturing amazing footage doesn’t always happen perfectly on every dive. Being able to make quick color adjustments “in post” can really help put a polish on your final project.

GoPro Studio has basic color-correction editing tools perfect for those getting started, or those who don’t wish to spend a lot of time editing video

Final Cut Pro X’s Color Board is very powerful, but isn’t immediately intuitive for manually correcting white balance. You have one Global ball and a ball for Shadows, Midtones and Highlights, which you can move left or right to pick your color, and then up or down to increase or decrease the amount of that hue. We prefer to have a single adjustment slider for Temperature and Tint. 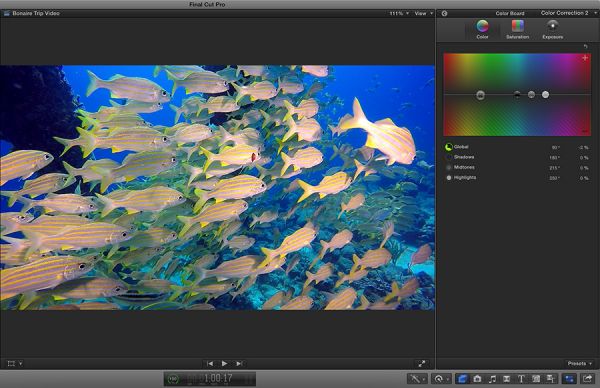 Adobe has outdone themselves with the addition of Lumetri Color. You now have sliders very similar to the develop module in Adobe Lightroom. Additionally, for underwater videographers, we love the Hue Curves. 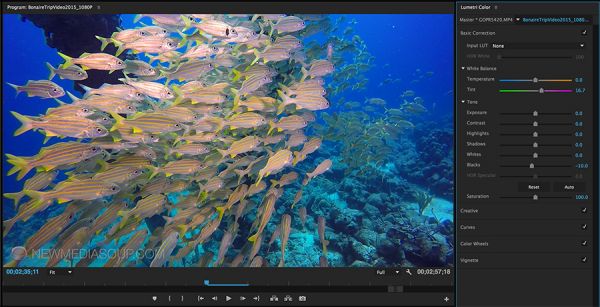 Keep It Short, Sweet and to the Beat

A director’s cut can be cool sometimes, but most people only have an attention span of two or three minutes when watching a video online. Think about your audience and remember to be a good editor! Additionally, when you pick a music track, think about song selection that supports the pace, movement, and energy of the video clips you’ve selected. Setting each clip to transition to the beat will be more impactful and come across as a much more professional movie.

The sea, once it casts its spell, holds one in its net of wonder forever.
People protect what they love.
— Jacques Cousteau

Once you’ve fallen in love with the ocean, you’ll immediately want to protect it and conserve it for our future generations to experience and enjoy. Sharing your underwater images with family and friends, especially those that are not yet ocean lovers, is the best way to communicate that our oceans and its inhabitants are fragile and need our care. Social media outlets are an effective way of sharing your experiences. Millennials are practically born posting content to their favorite channels. For those of us a bit older and less social media savvy, just pick one or two channels to start posting to. Share your message, and share often!

Joe Banks wrote:
This is very nice and useful. I personally use VideoStudio Pro for this kind of editing ever since I learned from this guide: http://www.videostudiopro.com/en/pages/gopro/ how to improve my GoPro videos. But I've found your tips very helpful, thanks for this guide.