Wildlife photography is opportunistic and, as is often the case, unpredictable. In a controlled setting I would be concerned with light, visibility, proximity to and behavior of the animals, and being prepared to freedive.

When shooting my friend the tiger shark I had to resort to basic instincts instead of technique. 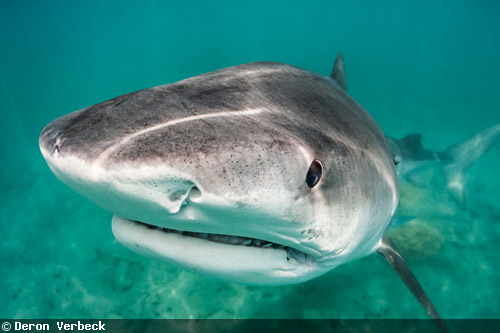 Lighting wasn’t a concern. It was the middle of the day but the visibility was poor at only about 20–30 feet. We encountered the shark while it had been feeding in the harbor on what looked like a mahi mahi carcass.

I was unable to see the animal as I entered the water. It was approaching me from behind. I was aware that this animal could be potentially dangerous in a feeding mode, changing its behavior from a docile, semi-approachable animal to a potentially aggressive predator. 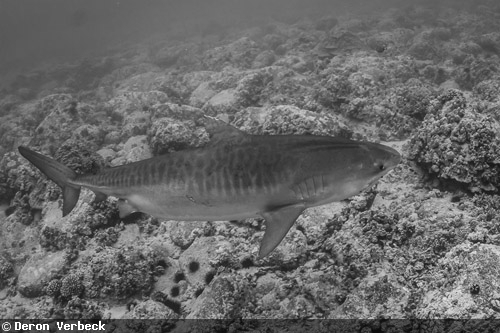 Once in the water, I exhaled to lower myself under the surface and positioned my camera towards the approaching shark. I was pulling the trigger and not looking through the viewfinder as the shark continued to approach, showing no signs of turning away.

I held the camera out to protect myself as the animal raised its nictitating membrane and opened its mouth. I used the camera to contact the shark and move sideways out of its path. The shark made three more attempts to bite me before swimming away. 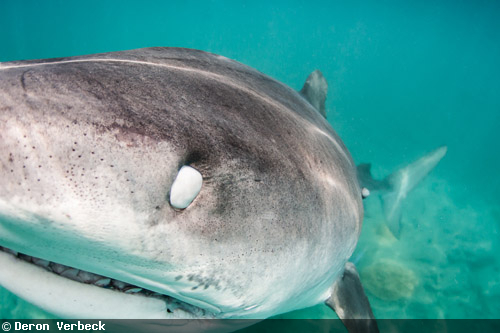 I shoot all of my photographs with ambient light. To me, the pictures are visually stimulating. It’s also nice to avoid the bulk and potential flooding risks of cable release strobes.

Before jumping in the water, I need to assess the angle of the sun, cloud cover and clarity of the water. I also take into consideration which direction and depth the animals are traveling to ensure the best chances of getting a shot.

I shoot on the shutter speed priority setting for the majority of my shots. Most of my encounters are on the fly with split second decision-making and I don’t want to be trying to figure out full manual settings while a beaked whale is swimming towards the boat.

This way I let the camera do it’s thing and I fix it on the computer later. I try to shoot on a high shutter speed to freeze fast motion, but if I have to dive deep or the sun isn’t optimum then I’ll drop the speed down a bit. 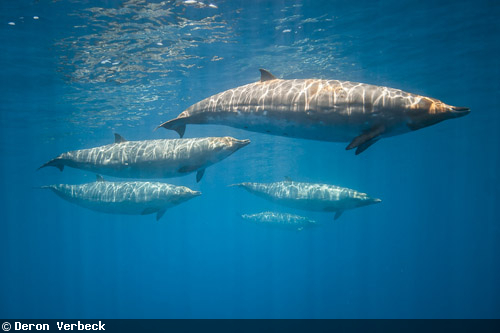 The proximity of the animals is another important factor for framing the ideal shot. Each species of animals reacts to me differently. For example, pilot whales have a very different comfort zone than an oceanic white tip shark or even more so, a beaked whale.

In the case of pilot whales, I have multiple subjects and I don’t want to disrupt their behavior. I want to make as close of an approach as possible while still respecting the animals personal space. 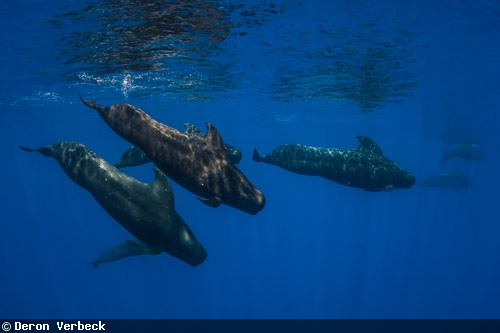 With the oceanic white tips, I’m not as concerned with the approach because most of the time, it’s approaching me. I want to be face to face. I just have to get the animal framed and focused.  When photographing beaked whales, and other less approachable species, I need to position myself in an intersecting path to spark their curiosity because they are very skittish animals and could quickly and easily disappear.

I carefully watch the behavior of the animals before and during an encounter. Before I first enter the water, I watch to see if the animals are paying attention to the boat or me and how they are reacting to my presence. When I’m in the water I have to watch for quick changes in behavior, which may go from docile to aggressive in the blink of an eye. 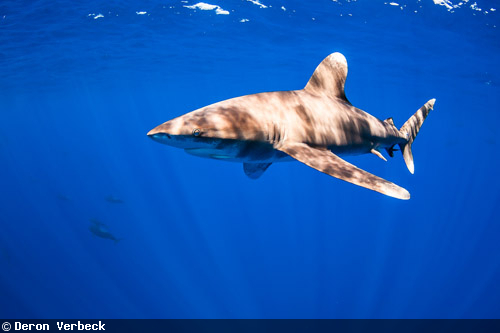 Oceanic white tip sharks are a good example of this because if food is introduced, their behavior changes dramatically and they literally will bite at anything that they get near. On the other hand, pilot whales are usually not concerned with free divers as long as there’s a respectful distance. Occasionally, they have shown both aggressive and avoidance tendencies if I approach too closely or too quickly.

Sometimes, on very rare occasions, the curiosity of the animal creates an inclusive interaction. I had an encounter where a group of false killer whales that attempted to share their prey of a Mahi Mahi with me. This afforded me a unique photographic opportunity. 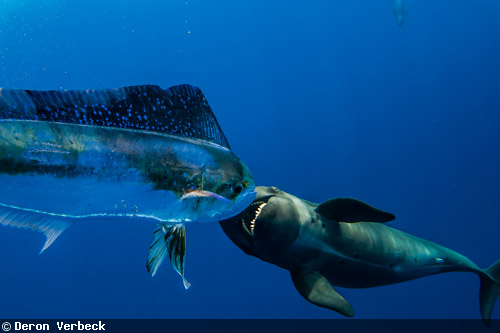 All of these photographic considerations would not be possible without my ability to freedive. As an ex-competitive freediver, I have trained so extensively that the techniques that I’ve learned over the years are second nature. 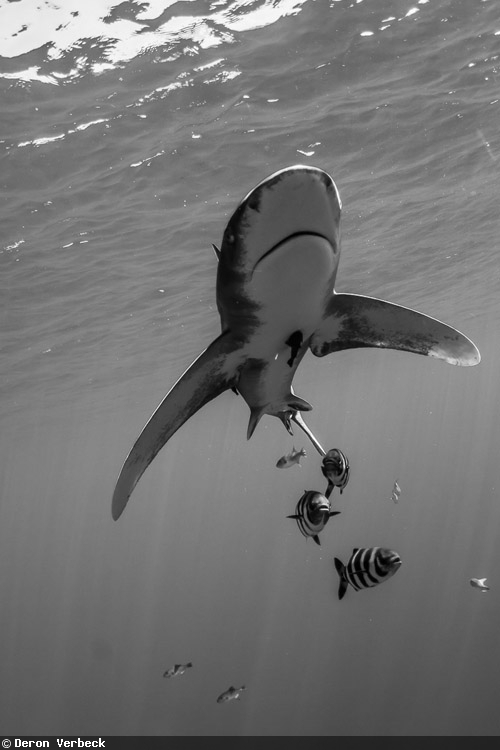 I really don’t have to think about preparation for a dive as I’m always in a prepared state. I’m mentally preparing for these encounters and start breathing on the boat even before I enter the water. I have to stay calm and aware of my surroundings while submerged as situations may change quickly.

I can’t let myself get excited because that raises my heart rate, decreasing my dive time. Being able to have a long breath-hold increases my chances of an up-close encounter due to the lack of noise, bubbles, or cumbersome equipment. 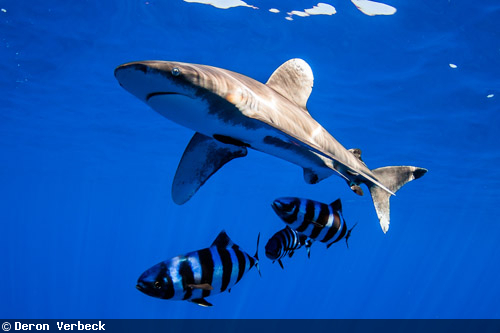 For the beginner free dive photographer, I would recommend starting with animals that are more co-operative like reef fish or even just shoot reef scenes. This way you can practice diving and trying to frame animals before things start to get crazy. It takes about 45 minutes for the average person to start to feel like their breath holds are good. 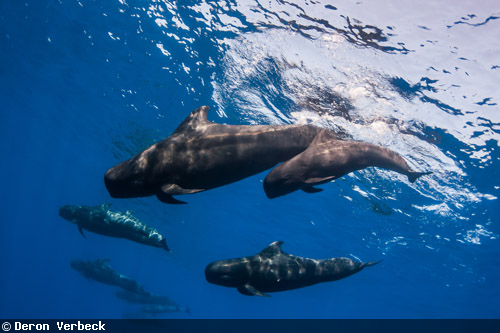 This will allow you to stay down a bit longer and feel more relaxed while trying to shoot. Remember that the key to a longer breath hold is less movement and being relaxed. Don’t sprint from place to place trying to make a shot happen, it will come.

Breathe slow and deep while you are traveling as to be prepared for when something does come along. Being relaxed will project to the animals and they will feel more relaxed with you. 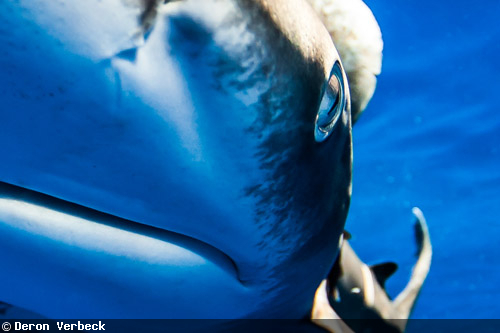 I’m continuously evolving as a photographer. Every encounter is completely different and I have to be ready to make changes and adapt. No amount of preparation or even perfect conditions can dictate the perfect shot. My camera equipment is not top of the line and my dive gear is getting worn.

The most important thing you have to remember when photographing large aquatic animals is just to “shut up and shoot.” 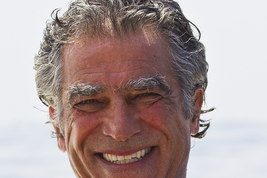