As a kid growing up in South Florida, conchs were everywhere. Their shells were for sale in tourist shops, they lined streets and driveways, and we ate their meat in the form of fritters and chowders. My friends and I would treat the shells as toys, blowing into them like horns and putting them to our ears to “listen to the ocean.” Later, as a teenager, I came to know the conch shell as a symbol of power in William Golding’s Lord of the Flies.

When I became a diver and eventually a photographer, it was not their shells but their eyes that intrigued me. Two long protrusions, like E.T.’s long neck, extending from its hard shell with a colorful iris at the tip. It was just recently that I learned how unique their eyes truly are and how photogenic they can be. 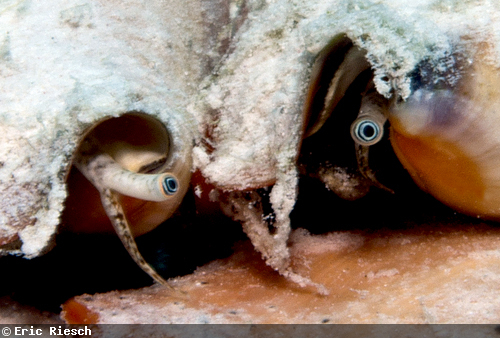 The conch is an invertebrate in the phylum Mollusca, in the class gastropods (snails and slugs) from the genus Lobatus, formerly named Strombus. The most commonly known conch is the queen conch (Lobatus gigas), found throughout Florida, the Bahamas, Bermuda and most of the Caribbean. Six other conch species are found in the Caribbean and more than 50 worldwide!

Conchs have a foot with a large plate at the end called an operculum. The operculum is placed in the sand and shoved to push off. The result is a jerky motion that causes the conch to bounce forward. They also use the operculum to prevent prey from pulling them out of their shell. Their slow moving nature makes the conch a perfect practice subject for a photographer refining macro technique. 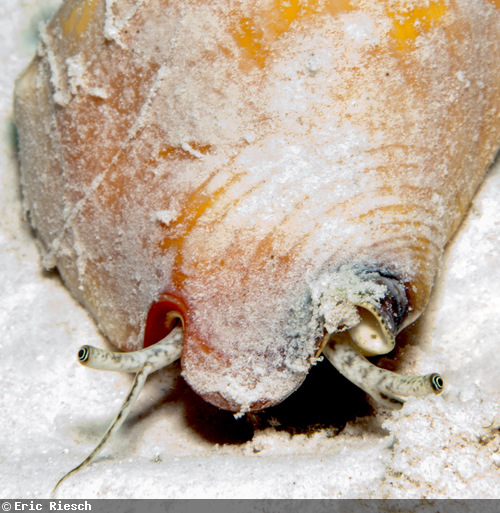 They are herbivores, feeding on algae found in grass beds (especially algae on turtle grass). They can be found from the shallows to about 100 feet in depth and have the ability to bury into the sand.

The Eyes Have It

Conchs have two-lensed eyes at the end of stalks (ommatophores). A black pupil and colored iris is found at the tip along with a sensory tentacle used to feel objects. The eyes cannot be fully retracted underneath their shell and extend slightly. To compensate for this, they can regenerate an amputated eye. Yes you just read that right… they are unique in the fact that they can re-grow their lost eyes!

New eyes will regrow at the tip of the eyestalk within five to six days. They initially appear smaller with hollow balls of cells and little pigment, but within 14 days the eyes are fully formed and as good as new. 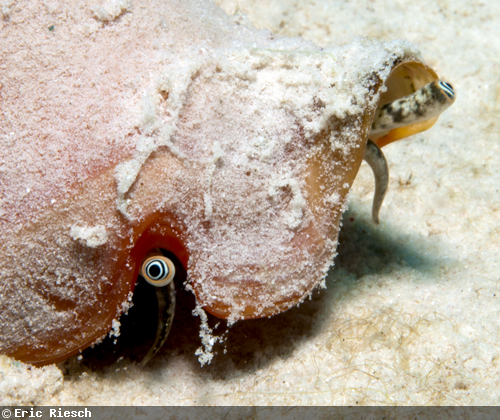 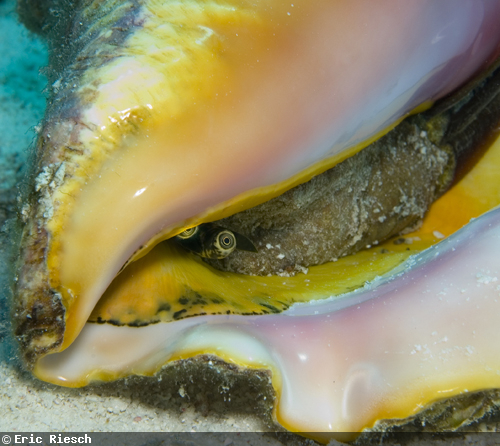 With the two eyes going in different directions, you will need to consider the composition of the photo. Try to wait for the eyes to be close together. When more than one conch is in the frame this becomes difficult. Try to place yourself directly in front of the shell and wait for the eyes to come to you.

Wait for the shot you want. The strobe going off will immediately cause the eyes to retract and you will have to wait for them to slowly extend again. Too many shots and the conch will no longer be curious. 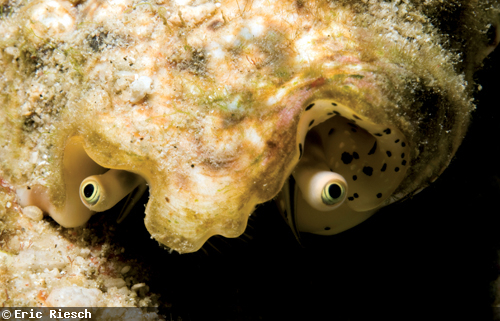 Conchs are found in grassbeds and sandy locations so use a shallow depth of field to blur the background and focus on the eyes. Often you will be shooting onto white sand so be careful not to overexpose the image.

Try using a higher f-stop to add depth of field to eyes, which may not be on the same plane. 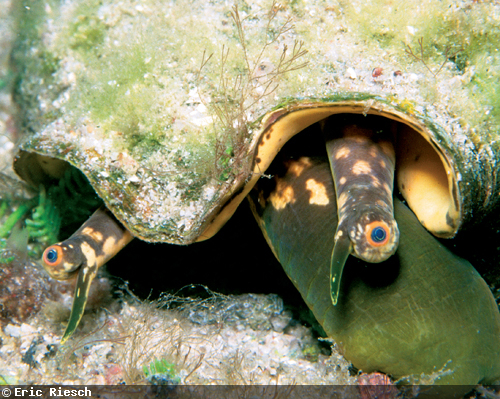 A Hope for Protection

The queen conch was over-harvested in the 1960s and 70s and the results decimated the population. More than 200,000 were taken off the reefs in Florida alone each year. It takes five years for queen conch to reach reproduction age and many are harvested before that time. 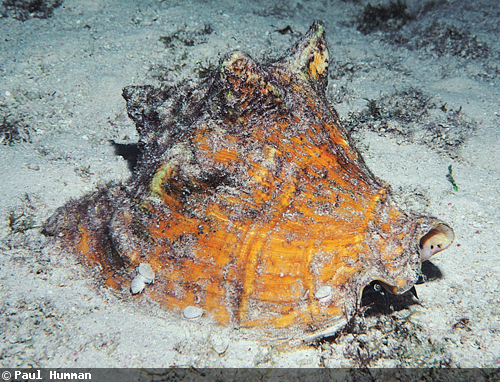 In 1985 Florida banned all harvesting and almost 30 years later the population is still estimated at less than 100,000. Harvesting has also been banned in Bermuda since 1978. In 1992 queen conch was added to the Convention on International Trade in Endangered Species (CITES). A CITES permit is required for any country to export queen conch. The Bahamas National Trust is launching a conch conservation campaign this month (April 2013). The United States was petitioned last year to add it to the endangered species list.

Author Bio: Eric Riesch is the photo editor at New World Publications on their series of marine life identification books. For more information on the queen conch and other mollusks see Reef Creature Identification – Florida, Caribbean, Bahamas by Paul Humann and Ned DeLoach.