Lying on the sandy bottom at 32 feet I am suddenly reminded of the childhood game Whac-a-mole. Well… only the jumping moles part. Watching Jawfish bouncing out of their small holes in the sand always brings to mind that humorous image, while attempting to focus through my viewfinder without laughing.

My formal introduction to Jawfish came in Bimini, Bahamas in the early 90’s. The species was a pair of Yellowhead Jawfish, Opistognathus aurifrons. Their courtship dance encouraged me to slow down. I patiently spent more than an hour on that dive watching the male Jawfish attempting to attract a mate in a beautiful display. 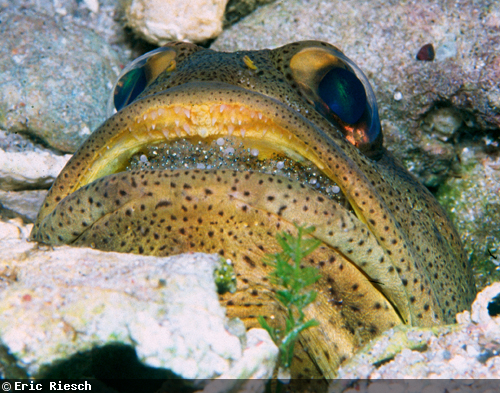 There are currently more than 80 scientifically described species of Jawfish, classified into in three genera (plus one new, undescribed genus) and at least two dozen additional undescribed species, according to Jawfish expert, William Smith-Vaniz, Ph. D. The common name was obviously given to describe their large mouth and gaping jaw. The typical first sighting of a Jawfish is only a head protruding from a hole—heads that are disproportionate to their slender elongate bodies.

The Yellowhead Jawfish is the most common of the eight species found in the Caribbean. Their primary feature is a bold yellow coloration on their head, but this can vary from pale to brilliant in different regions. 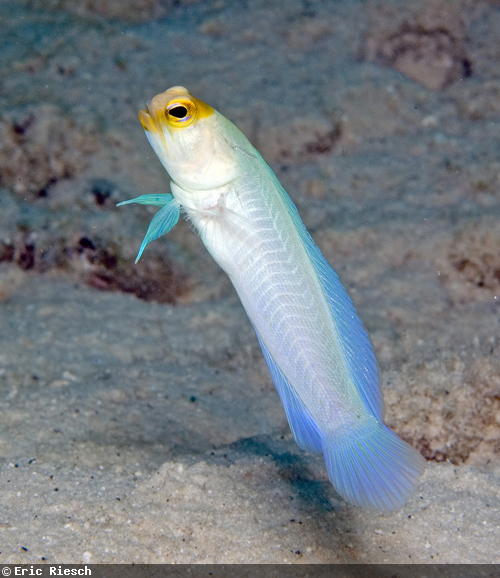 A recent study (Ho, Pruett and Lin) on Yellowhead Jawfish found marked differences in melanistic patterns (dark colored markings) on the lower jaw between species in Bimini, South Florida, St. Thomas and Aruba. The scientists determined that species in Aruba had the most genetic difference and the most physical difference was found in Bimini, but concluded they are all the same species.

A similar species is the uncommon Bluebar Jawfish, Opistognathus sp., found from St. Vincent to Tobago. The identifying mark is a slight blue bar below the eye. Occasionally found alongside the Yellowhead Jawfish are Banded Jawfish, Opistognathus macronathus, which are characterized by a light tan body with several blotches on the side. Dusky Jawfish, Opistognathus whitehursti, are found shallower in the Caribbean with similar markings to the Banded but with a bluish spot at the front of their dorsal fin. 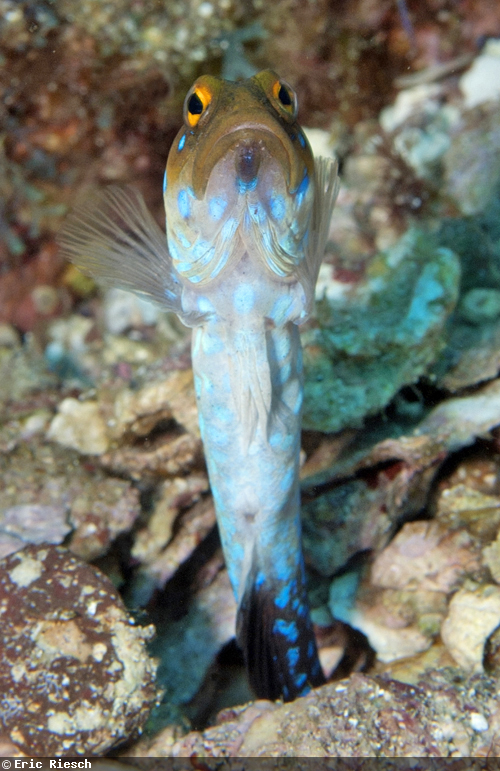 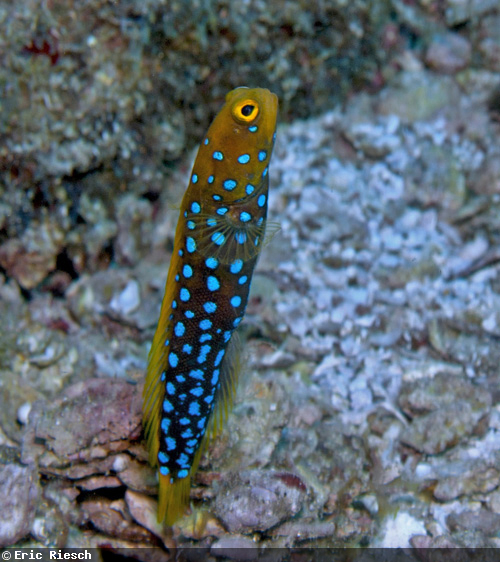 In the Philippines I was lucky enough to spot the rare Yellowbarred Jawfish, Opistognathus randalli, with its beautiful yellow streaks on the front of the upper iris. This species was only just described by Smith-Vaniz in 2009. 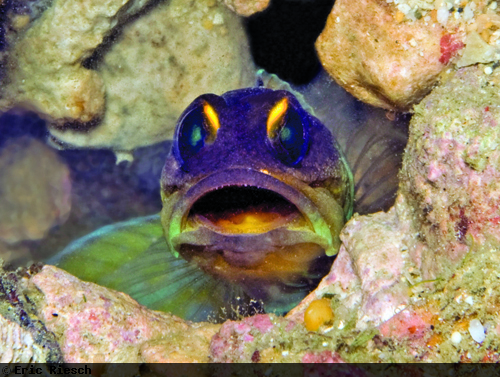 Civil Engineers would be proud of the attention to detail and hours of work that Jawfish spend constructing their rocky burrows. They can be seen spitting sand, moving small stones with their mouths, shaking and twitching their tails to position the burrow to their liking. 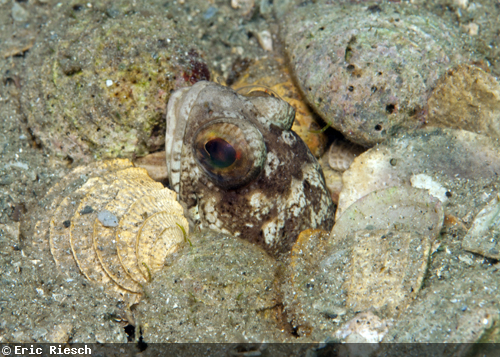 Jumping high out of burrows is often part of an elaborate courtship display. Males jump, dance and open their mouths wide as if to serenade the opposite sex. They bounce high off the sandy bottom attempting to lure a female into a separate burrow: their little love nest.

All species of Jawfish are mouth brooders, meaning they incubate eggs in the mouth—accomplished by the male! He will occasionally spit them out in a behavior termed “churning.” This action mixes the embryos and increases the odds that a larger number of eggs will fully develop. The entire development cycle of the eggs is from five to seven days. 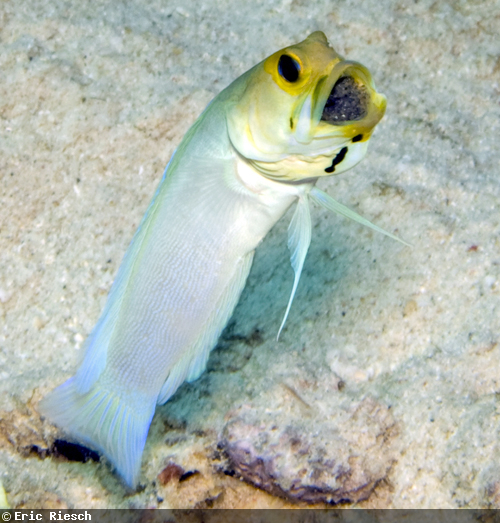 Get off the reef, slow down, look carefully-

Jawfish live at the edge of the reef in small holes burrowed out of the rubble. Slow down your dive or even stop and hover over the sandy bottom to look for motion at a distance. When you find one, look around closely as others are often nearby.

Get close to the sandy sea floor and approach the Jawfish in a slow stop-and-go method. Avoid dragging fins or kicking up sand. Wait several minutes for the Jawfish to become comfortable seeing a camera (especially large housings) pointing at them before moving closer.

If they retreat don’t give up, just retreat yourself-

If the Jawfish feels threatened by other fish (or by you) they will immediately retreat tail first into their burrow. Do not abandon hope. They will return for more photo opportunities shortly.  Back up, give them space and they will slowly peer out of the hole. Keep your trigger finger ready and wait for them to fully rise. 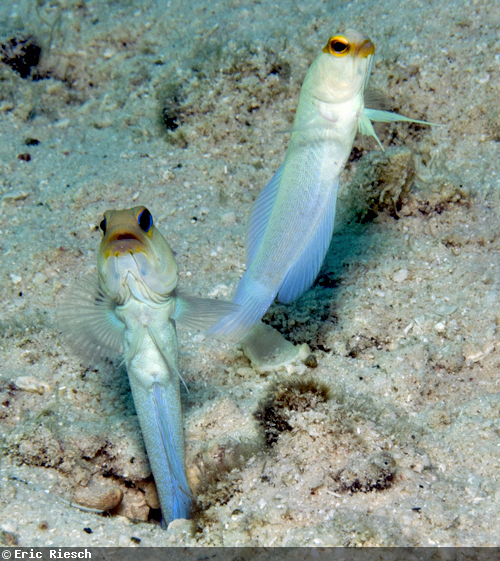 When photographing Jawfish, if you see a slight bulging in their jaws, this is the male with a mouth-full of eggs! At first sight they often hide the eggs by closing their mouth, but sometimes when the eggs are close to release their jaws become so full of large eggs they can barely contain them. If you notice eggs, go ahead and dedicate the rest of your dive to this fish. You will be rewarded. 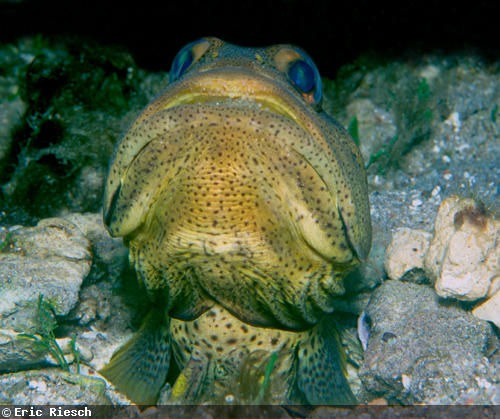 Christina Koukkos wrote:
I love jawfish! I used to see them all the time diving around Mabul & Kapalai in Malaysia. Finding a male with eggs was always a treat.

Thanks for the beautiful pics - especially the Yellowbarred, which I didn't even know about.

Eric W. Riesch wrote:
Thanks for the comment Christina. I always get a kick out of spending time with Jawfish too!

Harley Morya wrote:
This is really amazing article with lots of cool stuff and information.
You must be logged in to comment.
Support Our Sponsors
Advertise With Us
Newsletter
Travel with us