Choosing The Right File Type
By Matt Weiss, July 17, 2010 @ 11:32 AM (EST)
All DSLR and many compact cameras are capable of saving digital images as various file types. For the most part, you will be deciding between shooting in RAW or in JPEG. Many cameras offer a third file type, a TIFF, which is less commonly used. There is no right or wrong file type and the file type you decide to use will be dependent on your needs and intentions. We will provide you with information about each file type so you can decide which one is right for you. 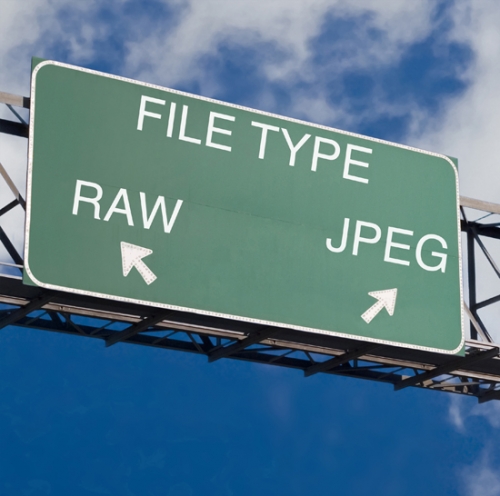 The Short Version: JPEG vs. RAW

Serious photographers who spend significant time post processing images in photo editing software, like Photoshop, need the highest resolution unprocessed images with as much data as possible to work with and should shoot in RAW. These are large files that contain all the raw information that is captured by your cameras sensor, hence the name RAW. Once you process the images and make the adjustments required, you will output the files into other formats, including JPEG.

If you do not plan on spending much time editing your images, and want more manageable files that take up less hard drive space and can be immediately viewed without processing software, then JPEG may be for you. JPEG files are already processed by your camera with some color, tonal and sharpening adjustments.

Pros of JPEGs:
•    Relatively small file size
•    Do not require editing software, though they can be edited
•    Can be read by any image application
Cons of JPEGs
•    Camera interprets how the image is supposed to look
•    Limits editing options
•    Degrades quality of image every time the file is edited
Pros of RAW
•    Contains all of the captured data
•    Allows for more control over editing
•    More forgiving to images with incorrect exposures
•    Original image is always preserved
Cons of RAW
•    Requires additional software to read, process and output visual files
•    Large file sizes requires bigger memory cards and more hard drive space
•    Can take a long time for your camera to write to the memory card
The JPEG 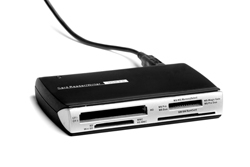 included with your computer’s operating system. JPEG’s are compressed and processed by your camera to form a file that is relatively small in size. Technically speaking, your camera uses fancy algorithms to convert the 12-bit data into an 8-bit data file that is recorded to your memory card. In other words, the information that your camera’s sensor captures is different than the information that is on the memory card.

This begs the question, what then is the camera doing to the scene I just captured? Essentially, your camera has internal software called firmware that rapidly processes the data captured by your camera’s sensor, interprets the image and saves it on the memory card.
One step of the processing is compressing the file by removing what it perceives as redundancies in the data.   Your cameras firmware actually breaks down the image into small, usually 8x8 pixel, blocks and throws away data that it perceives to be unnecessary. This process decreases the dynamic range of the image, as tones are lost in this process.  An image may have a quarter (for example) of the tones it had before processing. The data lost during this process is gone forever and cannot be recovered.

What the camera aims to do is remove excess data that it “thinks” would not greatly diminish the appearance of the file, but would increase size.

Most cameras not only give you the choice to shoot JPEG, but offer different levels of JPEG quality. Usually they are listed as fine, normal and low. The difference between the JPEG levels is how compressed they are.  The lower the quality, the more compressed the file. This means more information is “thrown away” during the processing stage in low quality JPEGS than with fine quality JPEGS. This, in turn, reduces the file size.  Considering how cheap memory cards are these days, it makes sense to always shoot the highest quality offered.
JPEGs look better out of the camera than unprocessed RAW files. This is because the camera’s firmware does more than just remove data, it processes and interprets the data into what it feels would be an optimal image.

During the processing of a JPEG, your camera is using different fancy algorithms to add contrast to, color correct and sharpen the image. Newer cameras give you some control over this process, allowing you to choose the amount of sharpening applied to the image. The result is an image that is in theory ready to be displayed straight out of the camera.

The negatives of the JPEG format present themselves during post production. Although you can edit JPEGS with programs like Photoshop, the compression of the file limits your possibilities. This is where the information that was thrown away begins to be missed. In fact, every time the file is opened and edited it loses even more information, further degrading the quality of the image.  Other file types, such as TIFFs and PNGs are lossless file types, as they don’t use the same compression algorithms as JPEGS and can be edited without any degradation.

So essentially - the original loss of information limits the effectiveness of editing. Even attempting to white balancing a JPEG is much less effective than white balancing lossless format, especially RAW files.

To recap, a JPEG is a compressed file that is processed by the camera’s internal software and can be read by any image program.  It’s small in file size but has editing limitations due to the compression. 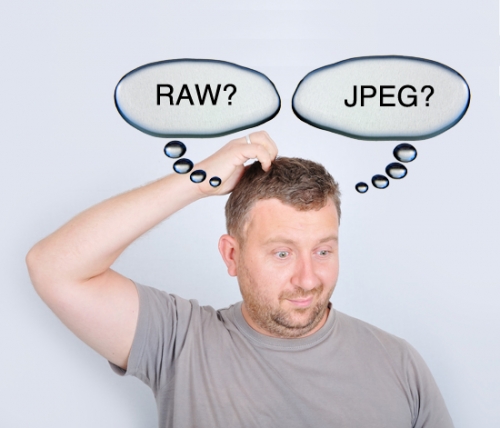 RAW Files
In contrast to JPEGS, RAW files are completely unprocessed. Additionally, there is no one universal RAW format, as each camera brand records RAW file in a proprietary format. Image editing software is required to read and edit them.

The major camera manufactures have their own RAW formats. Nikon cameras produce .NEF files, Olympus has .ORF and others have their own file types as well, but all of them are essentially the same thing. RAW files contain all the information that is captured by your cameras sensor. As a result, these files are relatively large. 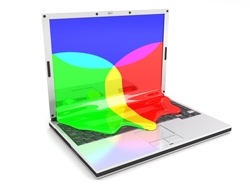 AW files are not technically image files at all, but essentially “read-only” files that cannot be altered. Any changes you make during the editing process must either be saved as output files or the edits themselves can be saved in external “sidecar” files called an .XMP. Therefore, you are never in danger of overwriting a RAW file, it will always exist in its original state.  This is why RAW files are sometimes admissible in court; they are never subject to digital manipulation. The changes you make are stored separately, and any final image will have to be saved in another file type, usually a JPEG or TIFF.

So why do you want to shoot in RAW if you are just going to end up ultimately saving the image as a JPEG?

RAW files give you tremendous control over how the image looks through post processing. Since RAW files are completely unprocessed, your camera will not employ the same algorithms as with JPEGS.  In turn, the files will look less colorful and detailed at first. However, the information that is stripped from the image during JPEG processing remains in the RAW file. This extra information allows you to make the adjustments manually on your computer with more sophisticated tools, which provides the ability to produce a better final result than the interpolation made by your camera.

When you choose a white balance setting, auto, cloudy, sunny, etc., and shoot in JPEG your camera processes the image in such a way (for the techies - it’s converted from the linear space and has a gamma curve applied to it) that white balance can no longer be properly changed. With RAW format, your image is tagged with the setting you choose, but it can  be changed to any other setting after the fact, in case you don’t like what the camera has done at the setting you chose. This can be very important in underwater photography, especially in ambient light photography, where different colors of light are lost at different depths. 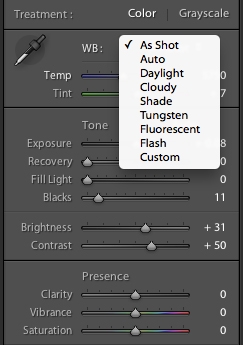 RAW files are completely uncompressed, and therefore also have a higher dynamic range. Raw files can be 16-bit images, while JPEGs are converted down to 8 bit images.  What this means is that a RAW image contains 65,536 tones or brightness levels to work with, while JPEGS have only 256 brightness levels. This has huge implications when it comes to adjusting exposure. If your image is a stop or two off, the extra levels contained in a RAW file means that you have much more information to work with when adjusting highlights and shadows and therefore a better chance at correcting  the exposure. In other words, RAW files are much more forgiving to mistakes. If you see a frogfish yawning and don’t have time to adjust your settings you can snap the image and as long as its not wildly off, you can correct the exposure if it is in RAW format.

Once you have made your changes, and do not want to do any further editing, you can save your image as a JPEG, or TIFF so it is ready for the web or for printing.

There is another significant benefit to the fact that none of the changes you make to RAW files are permanent. If you decide a year after editing that you preferred a warmer white balance, or simply improved your image editing skills, you can revert back to the original file, make new edits and then save a new JPEG with no loss to the image quality.

Obviously the “downside” of RAW files is that they are large files which require editing on a computer and more hard drive space. As mentioned you need specialized software to read and edit RAW files. The most popular editing programs are Adobe’s Camera Raw (part of Photoshop) and Lightroom and Apple's Aperture, but there are plenty of others. These applications are designed for efficient workflow and ease of use.  While many RAW images can be edited in a matter of minutes, that is still too much time spent in front of a computer for some people.  If you do not plan on editing your images at all, RAW is not for you.

The large file size means less images can fit on a memory card, and you should shoot with the largest memory cards possible. Additionally, some point and shoot cameras take a while to process and write the RAW files to the memory card, which means that your subject could be gone by the time your camera is finished reading the file.


Which File Type is For You?

You now should understand the pros and cons of each. If you plan on editing your images, or if there is the potential that down the road you will want to properly edit your images, then shoot in RAW, otherwise JPEG is just fine.