Displaying the bright purple and yellow colors just in time for Mardi Gras, the Fairy Basslet (Gramma loreto), is one of the most vibrant fish species found in the Caribbean. Their vivid hue attracts a photographer’s eye, but it’s their rapid movement and quick retreat that provides the real challenge.

Occasionally referred to as the “Royal Gramma,” this species is often discovered hovering upside down in small groups in dark holes hiding below a ledge of the reef.  This fish is a fast swimmer and it’s a real challenge to isolate an individual. Use a careful approach, a bit of patience and a lot of shots to obtain a nice portrait. 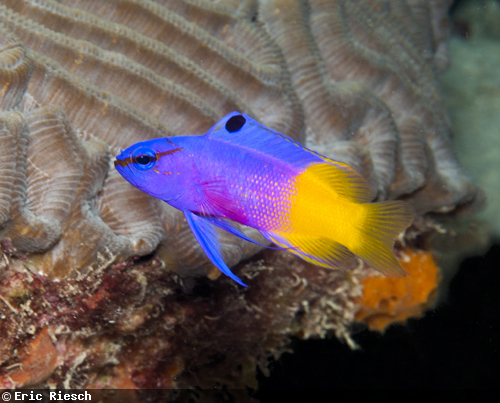 Description: Know your fish
Divers often confuse the color markings of the Fairy Basslet with those of the Juvenile phase of the Spanish Hogfish, Bodianis rufus. Fairy Basslets have a small black spot at the front of their dorsal fin that helps to differentiate between the two species. The photo below shows both species—can you tell which is which? 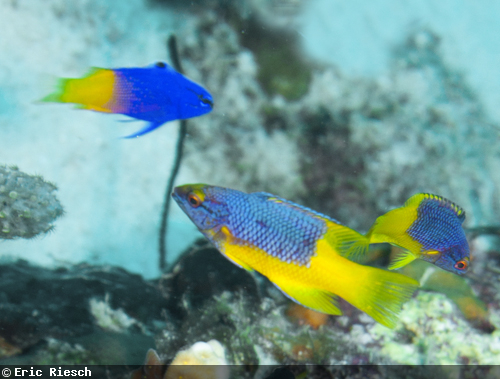 (ANSWER: There are two Spanish Hogfish in the foreground and a single Fairy Basslet in the background.)

The Spanish Hogfish is a cleaner fish, spending its day in cleaning stations atop coral mounds, waiting for larger fish to swim by them. In contrast, the Fairy Basslet is briefly found above the reef feeding on plankton.  Any quick motion in their direction and they rapidly retreat underneath a reef ledge. They keep their bellies toward the coral and swim inverted when inside the dark recesses of the reef. 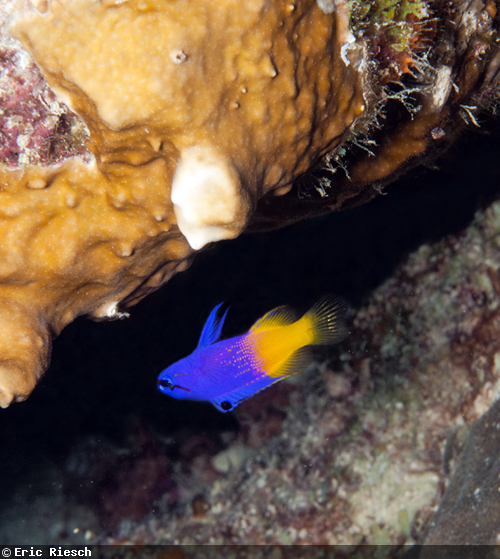 Behavior
Fairy Basslets live in small groups of a dozen or more, dominated by one to two large males. The large males chase the smaller males and engage in mouth-to-mouth combat allowing good opportunity for photos. This is also a good chance for a photo with two or more fish in the frame.

Three species in the genera Gramma (until recently) are found only in the Caribbean,  with each species replacing another the deeper you dive. The Fairy Basslet is the shallow species, replaced at 60 feet by the Blackcap Basslet (Gramma melacara) and below 200 feet by the Yellowcheek Basslet (Gramma linki). In areas where the Fairy Basslets and Blackcap Basslets are absent, the Yellowcheek Basslets can be found above 100 feet. 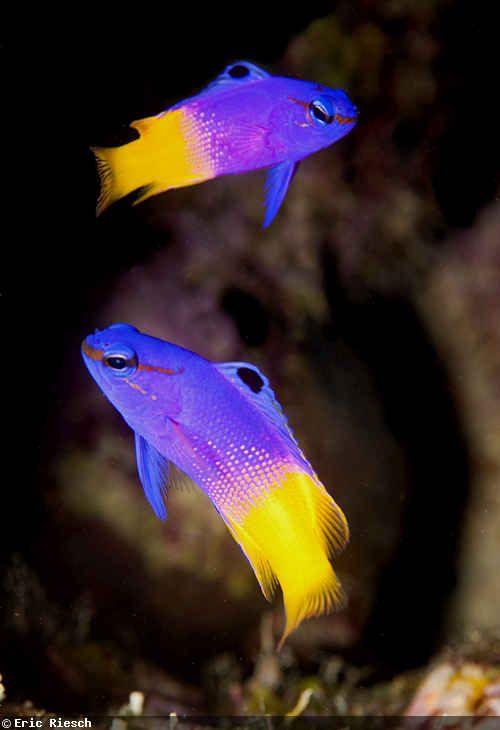 Approach
Fairy Basslets are found at depths of 40 to 60 feet. When approaching from above, a small group of basslets is occasionally found hovering over the coral. Swim directly away from the reef into the water column to descend below the fish. Approach the group from below, attempt to keep your camera between the fish and the hole they will look to for retreat. This action will allow you to photograph them with beautiful coral designs in the background. 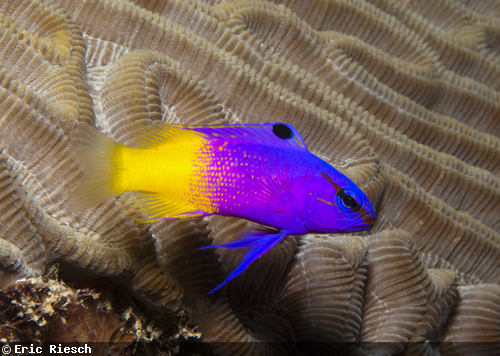 Background
Use partial strobe power and a larger f-stop number (small aperture) to get more depth of field when the fish is in front of coral. When the fish is above the reef and has an open water background, use full flash power and a faster shutter speed (1/200 sec.) to stop action and get a black background. Strobe positioning will also help darken the background. 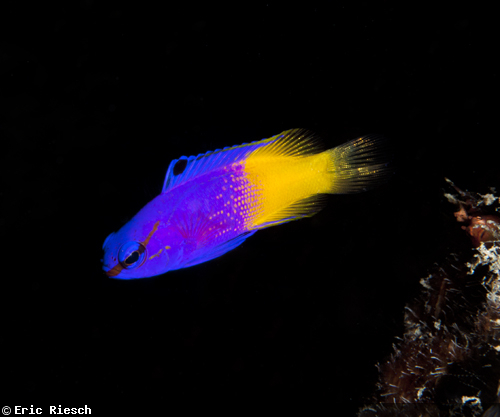 Always be on the lookout for something new
A new species of Gramma was discovered and named in August 2010, the Golden Fairy Basslet (Gramma dejongi), originally thought to be endemic to Cuba. The fish has a yellowish body and fins, except the ventral and fore dorsal fins that are a deep purple. In March 2012, survey diver and divemaster Dottie Benjamin reported the new species to the Reef Environmental Education Foundation (REEF) to extend the range of this species to Little Cayman. The full range of this species is unknown and new sightings should be reported to REEF. Always something new—happy hunting fellow photographers! 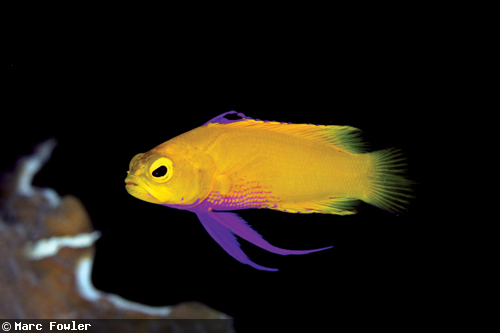 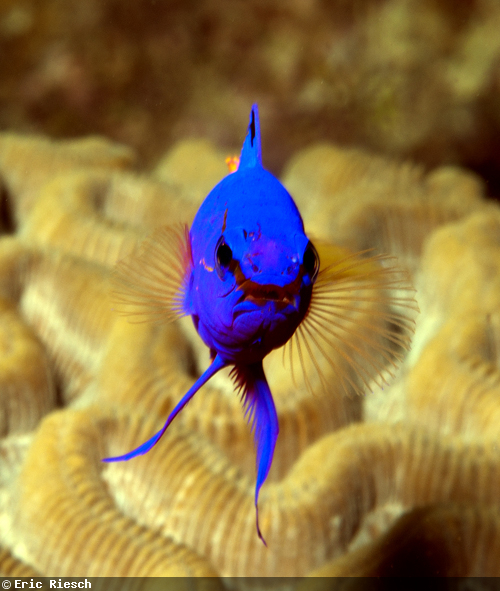 Author Bio – Eric Riesch is the photo editor at New World Publications on their series of marine life identification books. For more information on identification of Fairy Basslets in the Caribbean please see Reef Fish Identification: Florida, Caribbean and Bahamas by Paul Humann and Ned DeLoach.