The blue ringed octopus's  deadly venom has been the murder weapon in everything from a James Bond movie to numerous novels and even an NCIS episode.  The idea that an animal the size of a golf ball can kill us is intriguing and coupled with this little cephalopods shear beauty, it's no wonder this octopus tops almost everyone's critter "wish list." 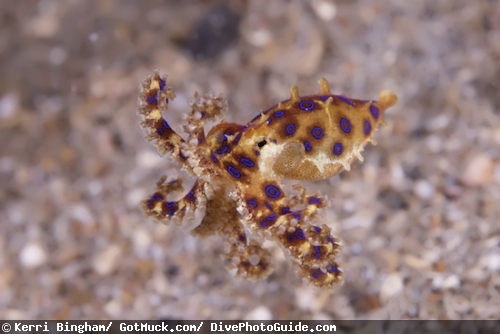 Description:
Blue ringed octopus are in the group known as benthic or bottom-dwelling octopus as they live and forage on the ocean floor.  There are believed to be at least 10 different species of blue-ring octopus.  These different species vary not only in size, coloration, and geographic distribution, but also in the shape and size of rings themselves.  The species blamed most often for injuring people is the southern blue-ring octopus (H. maculosa ) found in southern and western Australia.  However, the greater blue-ring (H. lunulata) and so-called "midring" species (h. sp.4) will be the subject of this article as they are ones most commonly photographed.

The distinction between "lesser" and "greater" is due to the size of their rings relative to each other, the "greater" having the larger diameter rings while actually being smaller in overall stature. The two common South East Asian species, the midring and H. lunulata are similar in size and coloring, but the rings of the midring are of a slightly smaller diameter.  Both of these little bundles-of-venom weigh in at a mere 15 grams and measure just 7cm from tip to tentacle tip.  They are masters of camouflage until threatened, their body having a brownish yellow color at rest, with the namesake rings barely visible.  In addition, a rough texture is provided by their small skin-flap appendages or papillae.

Once disturbed, the 25 iridescent blue rings spread over the mantle and tentacles come alive, warning the intruder of the stupidity of their impending action.  Most species of blue-ring do not have ink glands, relying instead on their venom for defense.  These little octopuses actually carry two types of venom in separate venom glands, one that they use on their prey and the other for self defense.

The venom of the blue ruing octopus is a combination of macula and tetrodotxoin (also called TTX), formed by commensurate bacteria living in the gland, which causes paralysis.  One blue-ring octopus contains enough venom to kill 26 adult humans.  It's unclear how the toxin is delivered, either by secreting the toxin-containing saliva into the water close to the prey or via biting it with their parrot-like beak. 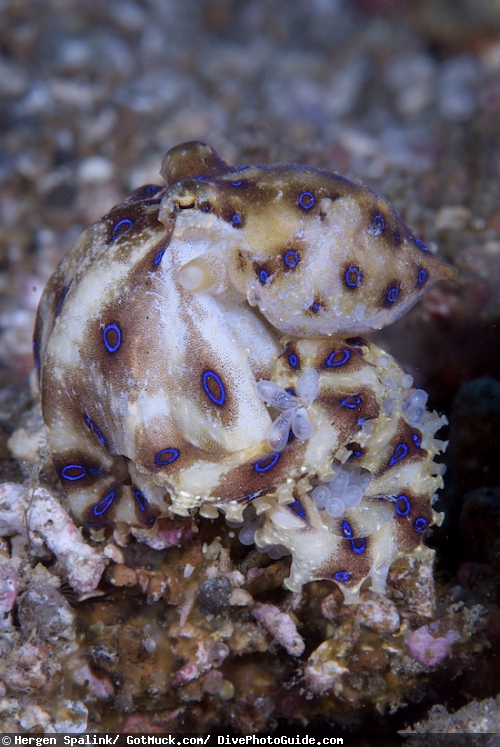 Location: Indo-pacific, with the species H. lunulata and H. sp.4 (midring) being found mostly in Indonesia, the Philippines, and PNG

Behavior:
The blue-ring octopus is a solitary and territorial animal, living in coral rubble holes.  The octopus generally only leaves to hunt or find a mate.  Using its tentacles as "feet" it slips across the reef, using its coloration to blend in and surprise prey, usually crustaceans. After poisoning the crab or shrimp, they wait for the venom to take effect before using their beak to devour their prey.

In addition to seeking out food, the octopus will also venture out to find a mate.  Males will approach a female, stroking them with their modified mating tentacle - the hectocotylus.  Unlike most octopus which mate from a distance, the male will then climb on the females back inserting the mating tentacle under the mantle and depositing his spermatophores.  Shortly thereafter the male dies and the female lays its clutch of 20-100 eggs which it must carry around for 30-50 days.  The female cannot eat while carrying eggs and dies shortly after the pea-sized babies hatch.  The average lifespan of a blue-ring is two years. 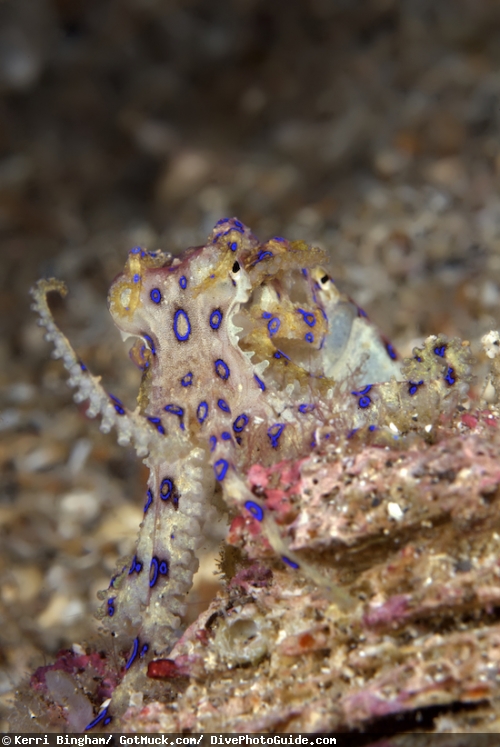 Equipment Tips:
Blue-ring octopus are extremely small (<7cm tip-to-tip), macro or super-macro equipment 2 is definitely recommended.  As they are bottom dwelling, the use of a muck stick is highly recommended to avoid stirring up sediment and preventing accidental contact with the octopus.  In order to bring out the colors of the rings, a flash of some sort is recommended.

DSLR:
Both these species of blue-ring octopus are small, less than 7cm tip to tip and they are easily spooked.  A 100/105mm lens will give this octopus a little more breathing room and allow you to maintain a good working distance.  If eggs are present, a super-macro setup such as a teleconverter, extension tube, or wet mate diopter may be useful.  Try to fill the frame as much as possible as these critters are rarely found on interesting backgrounds and tend to blend well. 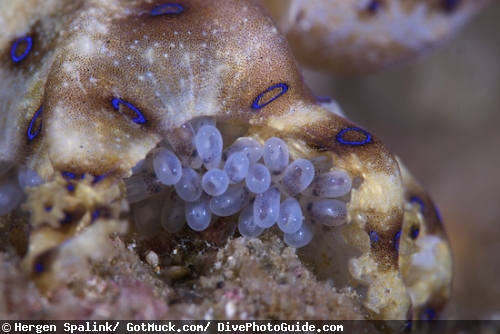 Compact Cameras:
The macro setting will yield better results for shooting these small octopuses.  A wet-mate diopter may be recommended depending on the size of the specimen, especially if eggs are present. 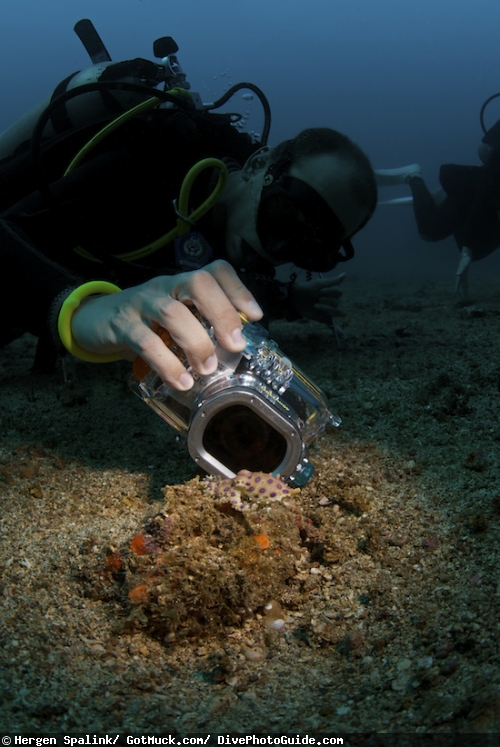 The Blender:
The octopuses are very successful at blending with their background.  Even when displaying their namesake's iridescent blue rings, the rest of the body is still the same color as the rubble strewn background.  By using strong shadows or Bokeh, you can pull the subject from it's backdrop.  The octopus will also sometimes perch itself atop pieces of coral rubble or swim short distances mid-water.  If this opportunity presents itself, try shooting at a horizontal or slightly upward angle, avoiding the top-down angle. 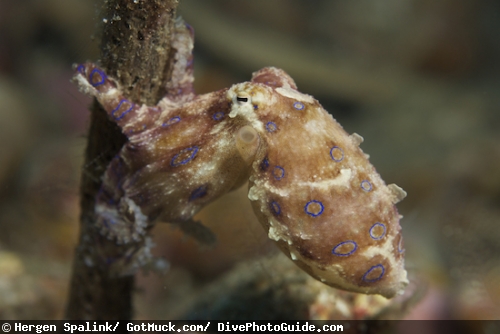 Patience:
Octopus are very intelligent creatures, they know you are there.  The best way to get a blue-ring active is to watch and wait from a meter or two away.  Once they determine you are not a predator they will generally resume the activity they left their home for.  Prepare your camera and strobes before approaching the octopus.  Shoot a few test frames of surrounding rubble to fine tune your strobe position and exposure as the color of the octopus will be fairly similar.  Once you move toward the octopus to take the photo, it will generally begin flashing its warning colors.  This may not last very long, hence the rationale of getting your strobe position and exposure down before approaching.  Focus on the eyes.  Depending on the perspective try to get either the mantle or a few tentacles in the plane of focus to make it clear what you are taking a picture of.  As with most macro subjects, it may not be readily obvious to a novice or non-diver what the subject is.  By having at least one eye and either the mantle or a few tentacles in focus the viewer is more likely to recognize the subject.