It was the word I was waiting to hear—I just hadn’t been expecting it so quickly. Everyone scrambled across the deck trying to catch a glimpse of our first action of the day. It was a shortfin mako.

Due to their distinct coloration, unmatched speed, and explosive agility, they are often called “Blue Dynamite.” They are one of the most impressive sharks you can ever hope to encounter. 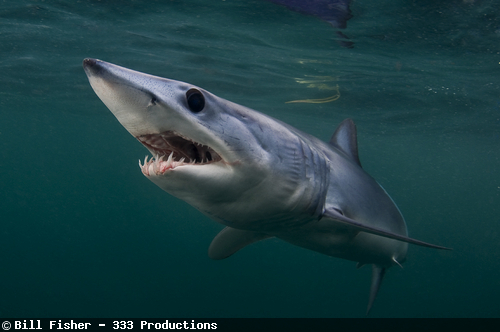 Unlike some makos that make their presence first known by furiously striking the hang bait, this one approached cautiously. It moved like poetry in liquid motion as its silver-blue body glistened in the morning sun. I was completely lost in the moment, feeling privileged to be observing one of Nature’s most perfect creations.

Remembering why I was there, I threw on my mask and snorkel and flipped over onto the swim step. Crouched and ready, I waited. Once the shark was spotted again, I got the go ahead and slid quietly into the water. I scanned in all directions, but saw nothing. I kicked away from the boat and that’s when it came into view, swimming right towards me just beneath the surface. Our eyes locked as it swam by. 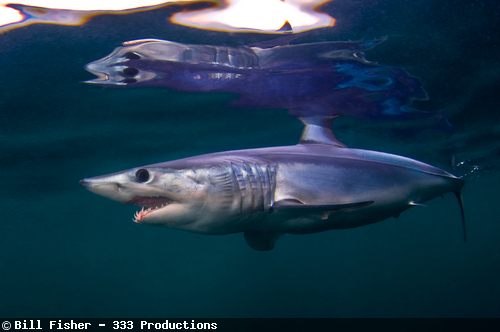 I adjusted my position to keep a constant view of the shark as it passed by me. Its big observant eye was watching, and I was staring back. I was peering into the same eye that is so often described as black and lifeless, but to anyone who has ever gazed into one while underwater, the eye of a mako—and every ounce of its existence—is bursting with life. 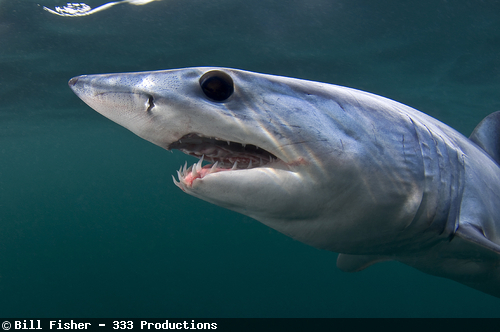 As we both maneuvered to prolong our observations of each other, I couldn’t help but notice how the indigo blue of the shark contrasted beautifully against the emerald green backdrop of the water. It was just the mako and me, floating in the North Atlantic Ocean.

Completely consumed by one another’s presence, we continued to investigate each other. As I stared upon this perfectly designed creature, I couldn’t help but feel respect and amazement. The shark’s poise made it seem as if everything was in slow motion. I was able to absorb every nuance and detail of this magnificent species, from the tip of its pointed snout, down to its perfectly shaped crescent tail. I lost sight of her a few times as she burst into the void, but she continually reappeared throughout the morning. 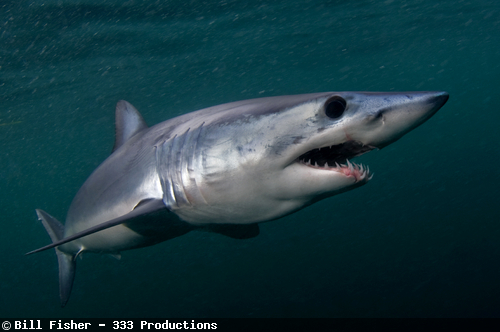 The mako is one of the most beautiful creatures in the sea, yet at the same time, one of the fiercest-looking animals on Earth. Even the illusory smile of a great white seems to win over more hearts than a mako. Just one look at this wide-eyed, razor-toothed fish, and you know it means business. Crossing paths with one is highly unlikely, unless you know where and when to look, which in most cases will be far offshore. One of the attractions of these animals is their elusive nature, and finding one requires patience.

Unlike other sharks that reside on a shipwreck, or find time to lie on the sea floor, pelagic sharks patrol the seemingly endless open ocean; making them harder to locate than most of the sharks we’re capable of photographing or filming. It takes a lot more than a bucket of chum and some wishful thinking; it’s more like trying to find a needle in a haystack. It takes time and effort to find a mako, but if you do, it can be an extremely rewarding experience. 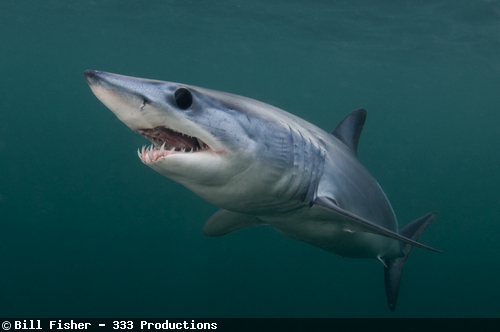 The shortfin mako is found worldwide from temperate to tropical waters, but there are only a few locations where divers can regularly encounter them—New England is one of them. My good friend, Joe Romeiro, a natural history filmmaker, resides there, and has been diving the local waters for years. He’s an expert in the process of locating and filming these elusive nomads, knowing how to find the sharks, and more importantly, how to interact with them once they arrive.

In 2009 Joe founded Pelagic Expeditions with fellow New Englander, Brian Raymond. They specialize in blue and mako shark diving encounters, running charters from June through September out of Rhode Island. 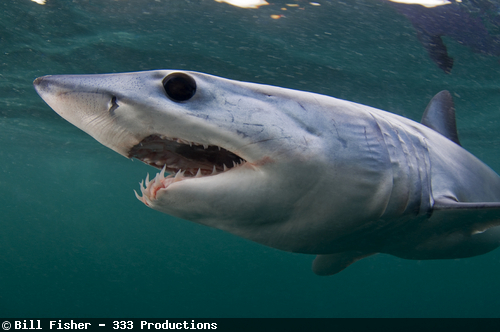 On a typical expedition, blue sharks are encountered most frequently, while makos are the bonus prize. Blue sharks share many of the same migratory patterns as makos, explaining why they are often witnessed together. Makos often tend to be a little more wary of divers than blue sharks, and sometimes seem to dislike the sound of scuba.

This is the reason why Joe chooses to freedive instead of using a cage and scuba gear. The makos seem to come closer to you if you are not blowing bubbles and making lots of extraneous noise. That’s not to imply that you can’t have a close encounter on scuba, but I’ve seen many makos appear at the boat, only to get spooked for various reasons, and never return. They are not timid by any means; they just seem to be more cautious than blue sharks. 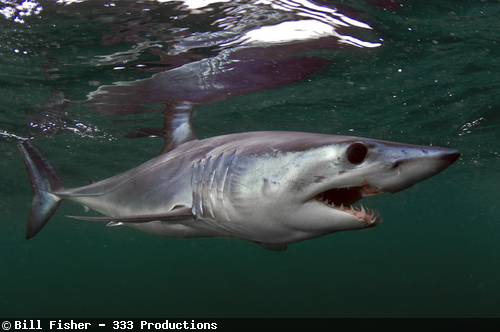 These photos were taken in the morning, with an aperture around f/8, and a shutter speed of approximately 1/200. I also used two strobes set at the lowest power and spread them far apart. The mako is fast and also reflective, and since there was good ambient light, I only wanted to use the strobes to add additional lighting beneath the shark. 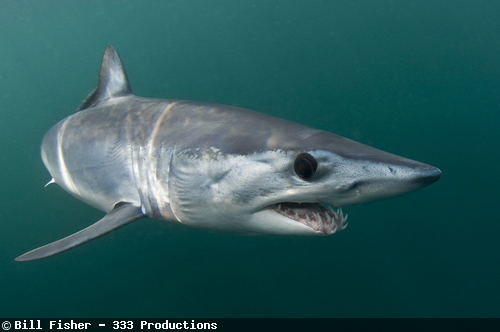 If you encounter a mako shark that is roaming the open ocean, chances are you may be the first person it has ever encountered. Their territory encompasses most of our planet. These are not the kind of sharks you’ll see at your local aquarium either.

Most attempts at captivity have ended quickly in failure. The blue shark has faired better, with the longest surviving specimen lasting approximately seven months, while makos have tended to die after a matter of days. Of all the sharks placed in captivity, the mako has continually faired the worst.

It seems that nothing can contain them, or even attempt to replace the open ocean they call home. If you want to see a mako, you have to see one in the wild. It’s all part of the privilege of encountering one, and part of the reason that I find Isurus oxyrinchus, the shortfin mako, one of the most impressive and intriguing of all sharks.

Joe Romeiro and Bill Fisher produce films that help aid in the conservation of sharks and the marine environment. Through their company, 333 Productions, they utilize their experiences to help show others that sharks are maligned, threatened, and some even face extinction. You can contact 333 Productions for upcoming events & expeditions at: info@333productions.com