Editor's note: Ric Frazier's 2nd place image in the 2007 Wetpixel & DivePhotoGuide Competition 'wide angle unrestricted' category was a major topic of conversation while on exhibit at the 2007 Our World Underwater dive expo in Chicago. Many of the show attendees and the online community, including professional photographers, challenged and debated that the image was the result of crafty photoshop work. I asked Ric if he would be willing to share the story behind this cool shot. It's a break from wildlife photography, but is very much skillfully executed underwater imagery at its finest.

Ric also shoots video professionally, and is extremely skilled. He placed second in the 2007 competition at Our World Underwater, and for 2008 he is among the esteemed panel of judges for the video competition. 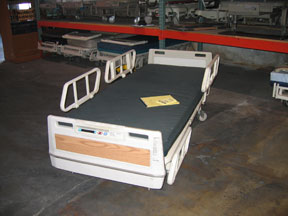 This was not only a great concept to work with, but the set was one of the more challenging sets I've worked on. The layouts from the art director had a 'patient' struggling to keep his head above water while lying in their hospital bed. We needed to make a real looking hospital room within a studio environment, in order to half fill the room with water.

The complexity lied in having to deal with 4000 gallons of water in a studio. Would the concrete hold? What would happen if it did flood? When doing a photo shoot and working with water and electricity, you need to know what you’re doing. The challenges are tripled. Of course, in an underwater shoot you also need to take into consideration, the kinds of materials used. The back wall, pre-built during the week of prep by a set builder, was treated with an epoxy to seal the wood, and a set stylist collected all the props that we could possibly need in order to achieve the desired look. All the props and the bed were placed inside the tank prior to completing the walls of the tank to insure proper water levels. We hired a water truck to fill the 4000-gallon tank quickly within an hour. The water level was set with a stand-in from the crew in the completed set. Once the art directors and myself were happy with level of the water with the stand-in, we had the real talent get in the hospital bed and then made the final adjustments. 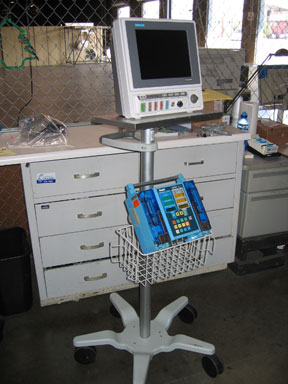 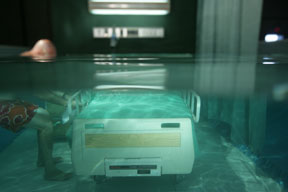 The main thing about shooting underwater is the unpredictability of being in water side by side with props and talent. For instance the mattress of the hospital bed was made of foam and incased in a plastic lining. Once the water was in the tank the mattress ofcourse floated and we were unable to strap it down with a fastener. The prop stylist came up with the idea of getting an inflatable mattress that we would fill with water. Once the inflatable mattress was filled with water it would still float but we could then fasten it to the bed easily. 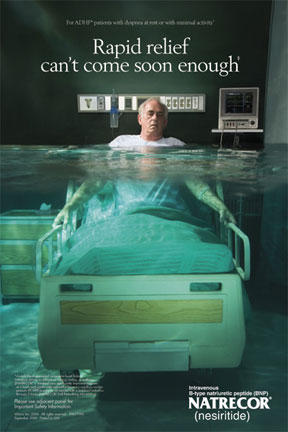 We had a little over a week to pull everything together. One-day pre- light, one-day shoot, one day striking the set. I took the photos above water and below water separately in order to get the sharpest focus for both. The complexity of the editing was relatively low. We had shot the photos digitally and were able to see everything on set and marked the hero shots as we went along. I then made an online gallery for the art directors and client so they could select the best possible shot that represented the health “condition” of the “patient” they wanted to portray in the ad. Once I had the selects from the agency I preceded to composite all the elements of the photos together.

Ric has redefined the art of underwater photography shooting everything ranging from people, props and sets, to ocean life. Recently he has shot for advertising clients such as Bayer, McdonalduA?s, MTV, and Shell Oil, as well as recent editorial clients Elle, ESPN, GQ, People, and Shape.

You can see a profile of Ric in the DPG Galleries, or visit his website.