One day my travel agent asked me, “Would you like to photograph whale sharks with few people around or do want to go on critter hunt again?”

I really love hairy shrimps, boxer crabs, mototi octopus and so on, but who can deny a strong strong fascination with the world’s largest fish. You never know how long a place like Cenderawasih Bay will stay secret, so this time I said let’s go for the big boys. 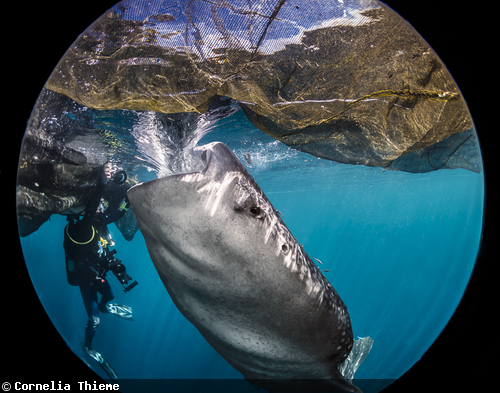 Cenderawasih Bay, located in the eastern part of West Papua, makes up the Bird’s Head Seascape along with Raja Ampat and Triton Bay. Pristine and vast, the bay’s reef is comprised of healthy hard coral gardens and small schooling fishes. The western part of the bay was declared a marine national park in 2002, which is the largest of its kind in Indonesia.

In this location occurs one of the most unique whale shark-human interactions of its kind. The bus-sized sharks stalk local fishermen on “begans” (floating fishing platforms), waiting for a free meal of any dead fish thrown into the water.

On the special day, I got up before dawn for the 2.5 hour boat ride. All I could think was, “Please don’t let it rain!” Fortunately, the clouds moved away and the sun came out. My mind was flowing over with ideas for some cool shots—silhouettes, split shots, sun bursts. 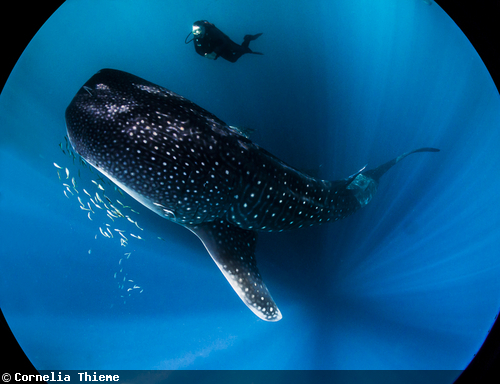 As the he departure for the trip approached, I thought about a wide-angle solution for my Canon Powershot G11 in the Ikelite housing. In hope of a close encounter it was important to me to have a big field of view, 16mm or less, and sharp corners. A little research, some email and phone calls later I found a 8mm semicircular fisheye conversation lens with 180-degree field-of-view and a special Athena domeport. After a few shots, I knew it was exactly what i was looking for.

We arrived at the dive site and saw a whale shark very close to the surface. Everybody jumped up to get into the water and in the first couple of minutes of this dive I was too fascinated to take a single shot. Usually you see these sharks just passing by or eating, but these guys where different, a little bit like pets just watching us closely. 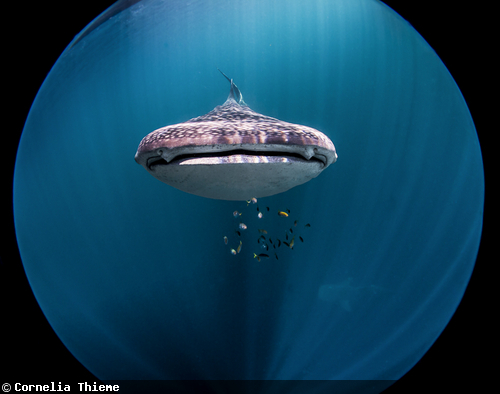 My mind cleared and I started to take some test shots to find the right settings, as strobes and video lights are not allowed. After a while the sharks where no longer afraid and came very close to us. While we were diving the sky was gradually clearing up and finally the sunbeams were dancing in the water.

In this illuminated scene the shutter of my camera worked very hard. Then I looked at the surface and began to shoot silhouettes. With the big fish you cannot really plan the shots—you just have to wait for the sharks to pass over your head and in front of the sun. 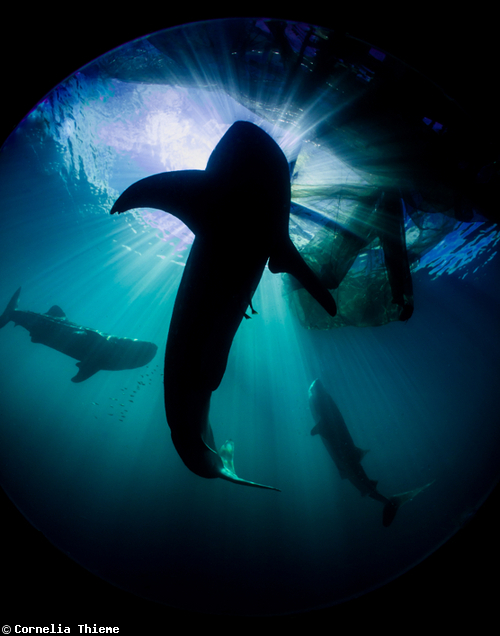 Now, looking back at this exciting experience I still get goosebumps. I hope some my photos have captured the beauty, elegance and grace a little bit and help us to keep and protect our underwater world.