When Captain Jay of the Belize Aggressor said that we were diving at a site called Silver Caves, I was very interested. Named after the silversides that frequent a cave in the reef, often numbering in the thousands, we couldn’t wait to jump in the water and see what was hiding in the caves.

On the first dive, I made a beeline to the cave, which was brimming with countless silversides. There was a lot of activity going on, with tarpon and groupers intermixed in the feeding bonanza. I noticed immediately that the scene had great photographic potential, if only I could unlock it.

Initially, my efforts proved frustrating when most of the other divers from the boat also went to check out the action, kicking up sand in the cave entrance. It was photographically challenging, so I decided to move away and wait until everyone had tired of the spectacle to have a better look at the scene. 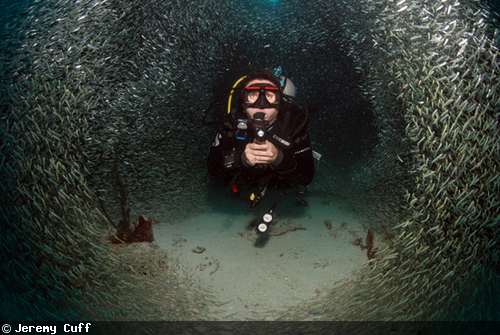 During the next surface interval, I looked at what I’d captured and decided to go back and spend the whole of the second dive around the cave. Although I had a couple of nice images from the first dive, what I really wanted to capture was the feeding tarpon surrounded by silversides in the cave.

On the second dive, I decided to wait outside of the cave and watch what was happening. Parked outside the cave entrance, the tarpon still wouldn’t pass right by me to go into the cave. But when I stayed further back, the tarpon began entering the cave again, diving into the mass of fish. 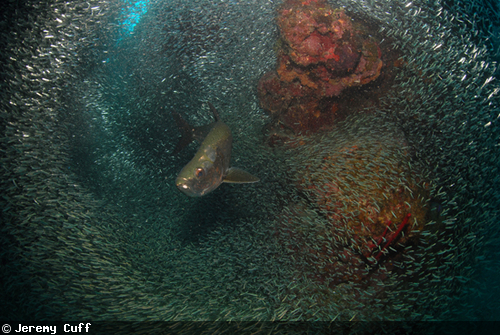 Finding a cooperative tarpon to be a subject was difficult.

Once a tarpon was committed to entering the cave, I would follow it in. On each attempt, I couldn’t see the tarpon through the wall of fish, so I had to be ready for it to suddenly appear as the silversides parted. I also switched on my strobe’s focus light so that I could see what was going on, and to avoid wasting time with my autofocus zooming nonstop in the gloom, and ultimately being unable to lock on to the subject. 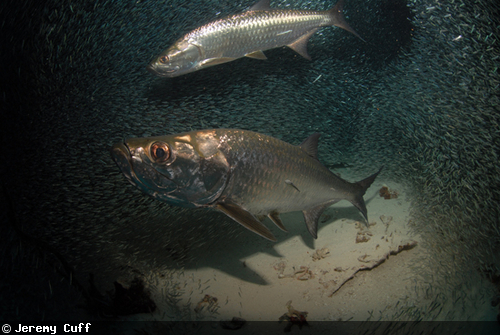 Two subjects are better than one!

With each tarpon encounter in the cave, I only had the chance to capture one or two images, making the final shot more time consuming than most. In some attempts, the tarpon would escape from the cave without a single successful shot.

Both the silversides and tarpons’ hyper-reflective scales are less-than-ideal for lighting with strobes. Keeping the strobes fully extended from the housing and reducing their power to a “kiss” of light helped prevent a nightmarish whiteout on certain parts of the fish, which can ruin an otherwise acceptable image. Setting the camera’s playback to display highlights was especially useful in avoiding blowing out the shiny scales. 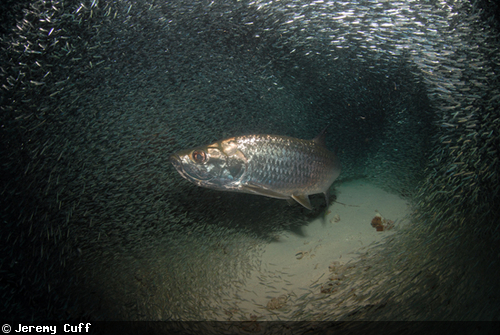 The final result proved worth the effort.

After two dives at the site, I left with the image that I was hoping for. Without a doubt, there are better images of this spectacle that can be captured, but sometimes making the best out of a situation is just as important as coming out with the best image.

Of course, another two dives at Silver Caves would be very welcome.