The technique side of most big animal photography underwater is usually straightforward. The size of the subject usually means that pictures are ambient light only. Auto-focus and auto-exposure handle everything else. This leaves little room for manoeuvre on techniques if we want to make our shots stand out.

This type of underwater photography is often referred to “f/8 and be there”. The quality of the final shots owes much to the quality of the encounters we get. This is not meant to underplay the skill of the photographers who specialise in these subjects. There are several whose work consistently stands out. They have the uncanny ability to nail the shot, with beautiful lighting, harmonious composition and intriguing gesture, when offered only a fleeting opportunity.

Much of their success owes to preparation. The technical side, the ideas and other considerations should be sorted long before the subject comes into view. These days we can watch videos on YouTube, so we know how we can expect the subject to move and behave. Additionally, we can look at existing images on the web to see which angles look best and which lenses are most suitable. Both are things I did before photographing basking sharks for the first time.

We can improve our odds significantly by working with the best guides (in my case here, with Charles Hood). But still those really special encounters require dedicating time (and money), and whatever we choose to shoot, there will always be photographers who have racked up 100s of hours with the subjects. Whether it is sailfish in Mexico or humpbacks in Tonga, there will always be someone who has put in the dedication and bagged shots of fantastic encounters in the best conditions. 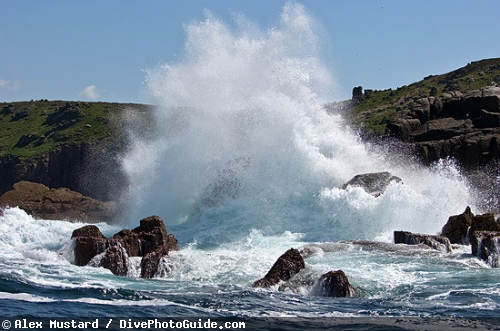 So where does that leave the rest of us, who will probably only have one visit of a few days to get some shots? Much of the time we settle with taking “me too” images. I know I do. These are pleasing pictures, but offer little new, other than having our name in the IPTC Author box. We can trust to luck, and sometimes we can get that special moment in the best visibility of the year. But this is not a recipe for consistent success.

Or we can try and be different. That was my approach when I went to Cornwall this year to photograph basking sharks for a British Conservation project called 2020VISION. Although I had never seen a basking shark underwater before, there are many British underwater photographers who have classic portraits on sunny days in excellent viz that I planned from the outset to try and produce a different image. Something that would stand out from an image that already exists in stock libraries around the world.

Since basking sharks swim near the surface and close to shore, my plan was to shoot a half and half. Not an original idea, but as far as I know, nobody has produced a decent split of basker. The main problem is that open water in the Atlantic Ocean is rarely glassy smooth enough for a half and half image. To allow me to shoot a half and half in these less than ideal conditions, I built (with help) a 550mm (21.5”) dome port for this shot (and other subjects I am working on). This would allow the dome to control the movement in the water. 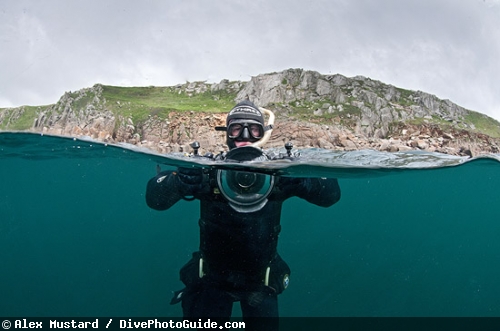 Test shot showing how the big dome can handle water movement that would be impossible with a standard sized dome.

Despite starting the build back in March, the dome was still only completed days before the shoot, and it didn’t fit on my Subal, leaked and had glue spilled all over the dome. Luckily, I had a Nauticam D300s housing around for review, so I managed to fit it to that with a Subal adaptor, sealing the leaking joints with plumbers Teflon tape and electrical tape. It also meant that from the outset I wasn’t going to be able to take a wildlife competition image, because of the need to clone out the glue marks!

A dome of this size is massively buoyant. So I trimmed the housing to float horizontally half way up the dome, with lead diving weights, a Diet-Coke bottle and kiddies inflatable arm bands! It worked very well. 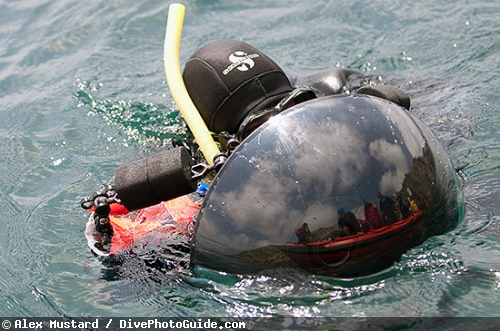 The big dome was trimmed to float at half way. This made it very easy to handle in the water – even if it took up half of the boat!

But before getting the big dome in action on the sharks I wanted to get a few of those me-too shots. Looking at existing basking shark images I decided that my favorite of the classic poses was mouth open, 3/4 side on, so that the nose and pectoral fin are on one diagonal and chin and tail are on the other diagonal, with a bit of reflection on the surface. Too side on, you can’t see enough of the mouth. Too head and you don’t see enough of the body to get a sense of the animal. Knowing the pose I was after meant I was able to get exactly this shot on my very first pass from a basker. Although the shot below owes much to Charles’s advice in telling me how to get good passes - basically float on the surface and move as little as possible! 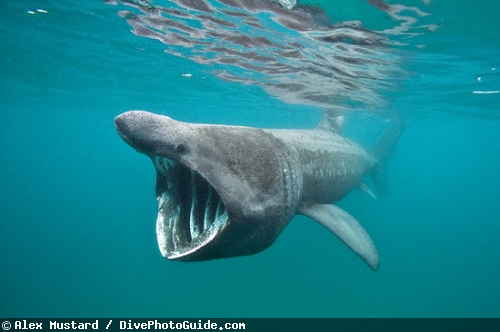 With standard shots in the bag it was time to experiment with the big dome. Since it floated on its own, it was easy to swim with and getting into position for a pass was not a problem. The main problem, perhaps not a surprise in England, was the weather. It was overcast much of the time, which meant that there was too big an exposure difference between the two halves of the image. White cloud was the worst. 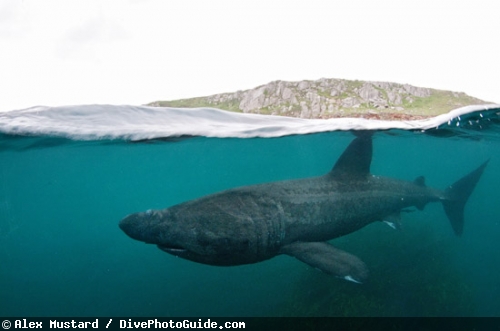 When the sun is out there is much more penetration of light into the ocean and it was quite easy to balance the exposure. 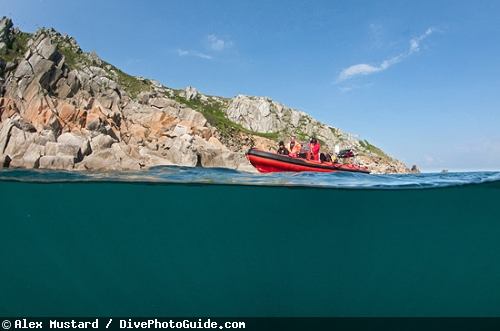 But typically this was the time that the sharks were too far from shore to get the land in the background. I have some useable shots, but not yet the image I had in mind. Also the useable shots are under wraps for the 2020VISION project, but I can show what was in my mind. Below is a composite image of St Michael’s Mount and basking shark. Both half taken on the same morning, with the same camera, lens and the big dome. I have no problem producing a composite image, but I think it is important to label it as such, so people know what they are looking at. 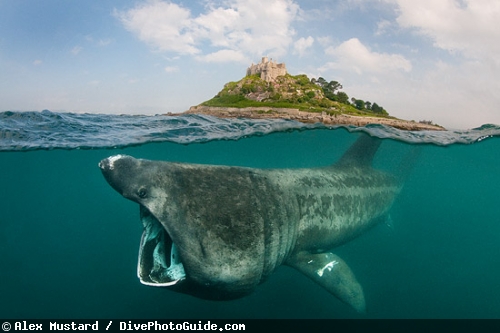 A composite image of a basking shark and St Michael’s Mount. The big dome theory is proved, but I still need more time to get a shark in English sunshine, just the right distance from the cliffs. Nikon D300s, Nauticam housing. Tokina 10-17mm @ 17mm. Big dome. ISO 320.

So in conclusion, this is still work in progress. I am very happy with the composite image and the unmanipulated images that I can’t show now, but knowing I can get this spot on in camera leaves me unfulfilled. I have proved my idea works. So the f/8 works, now I just have to be there. Well, that and get the dome to fit my Subal. Next season perhaps…