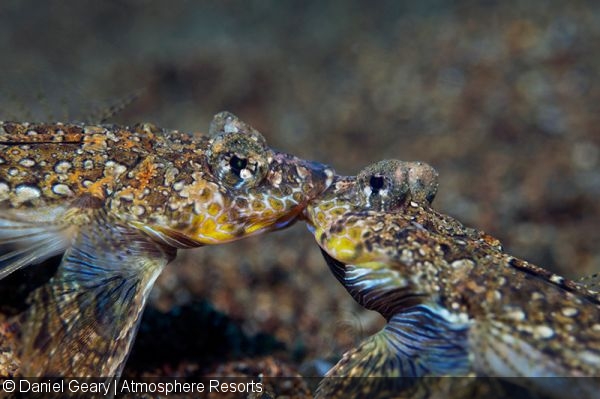 Underwater photography has reached a new era. Gone are the days of vintage photography equipment—physical flashbulbs and rolls of film—that limit the number of photos you can take during a dive. They have been replaced by a never-ending, always-improving line of digital camera equipment, which now includes waterproof compact cameras that can photograph even the smallest of subjects.

Add to that the rise of social media, and now you can find magazine-quality photographs everywhere on Facebook and Instagram, many of them shot by amateurs who are just shooting for fun. This seems great when it comes to inspiring new photographers, showing new or non-divers what other animals are out there, and also helping “critter hunters” with up-to-date locations of rare animals. However, there is also a downside to the emergence of digital equipment and social media—some divers and photographers are putting the image above respect for the environment. 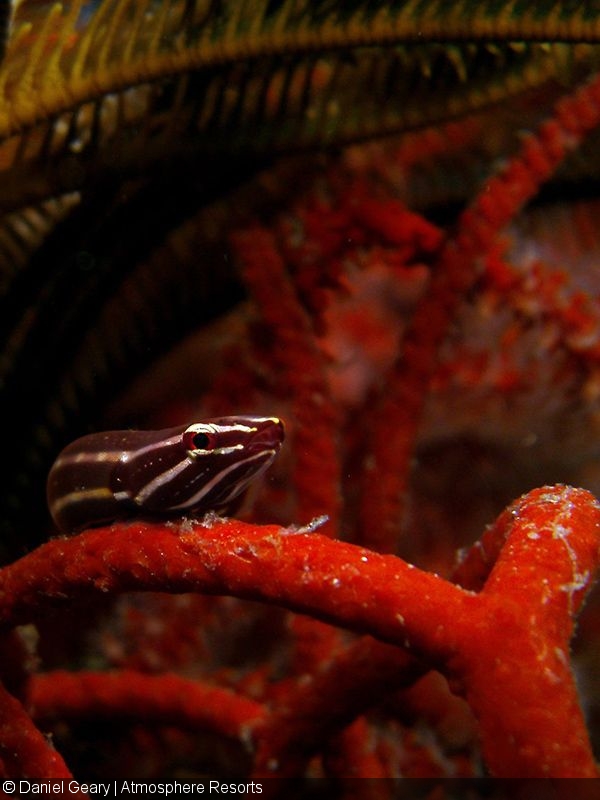 A crinoid clingfish found outside its home, resulting in a beautiful red contrasting background

With the abundance of great photographs on social media, it seems like there is a competition mentality—who can get the most likes or shares? There are photographers with compact cameras attempting to reproduce photos taken by a semi-professional with a setup worth thousands of dollars, and also photographers trying to force a shot or behavior in order to one-up a previously well-received photograph of the same subject.

As a consequence, the must-have tool for macro photography, the muck stick, which was mainly designed as a buoyancy aid when there’s current, is now sometimes used to herd creatures into unnatural positions for a photograph. 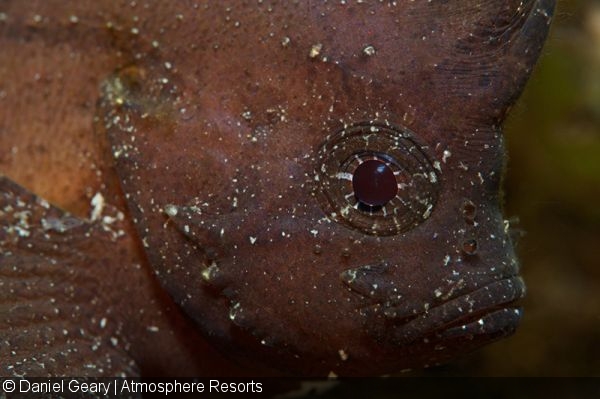 I’m not going to lie—I have engaged in inappropriate behavior before. It is much easier to move an animal into position than to skip over it and hope to find another one. It was how I was taught by dive guides and fellow photographers when I started and I didn't see it as wrong. After photographing consistently over three years, I made a decision about a year ago to never manipulate animals. Ultimately, not moving an animal is a choice that must be made by each diver and, hopefully, enforced by dive guides and dive centers. With practice, good buoyancy, and the right techniques, animal manipulation is not necessary to achieve great photographs.

In this first part of a two-part article, I discuss the various techniques macro photographers can employ as alternatives to critter manipulation, from a more creative use of backgrounds to searching for naturally occurring active behaviors. In the second part, I show how these techniques can be applied to the most commonly manipulated animals to make your images stand out from the crowd.

A common belief is that a photo with a black background is always the best. But due to the abundance of black background shots, it is no longer as original as it used to be for a lot of subjects, although occasionally it really makes a photo pop. A manipulated black background shot may involve moving an animal to the top of a habitat or even flinging a critter into the water column, which means some great photos can be accused of foul play when there was none involved. 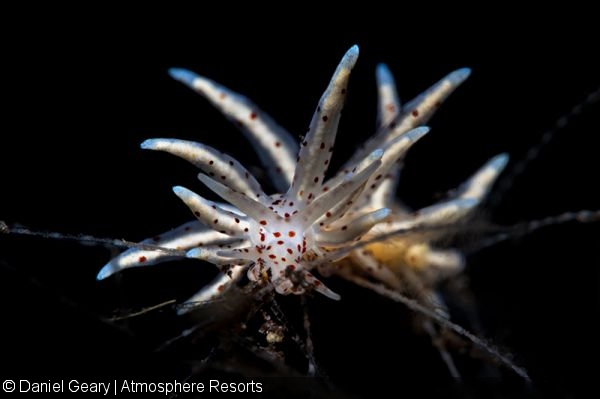 A nudibranch (Eubranchus sp.) with a black background

Black backgrounds can be achieved without manipulation, such as placing a black slate behind the subject or positioning your strobes in a different manner, but sometimes including the background makes a photo more desirable. It can enhance the photo by adding texture and color and might even serve as a size reference for your animal. Some of the more humdrum animals can create great photos due to their preferred habitat, so consider looking out for interesting backgrounds first and then choosing the animal. 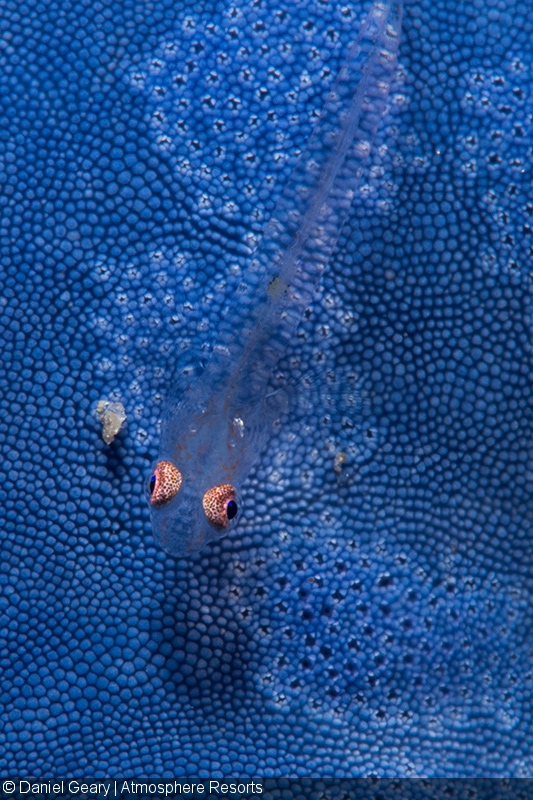 This translucent goby helps highlight the pattern of the starfish 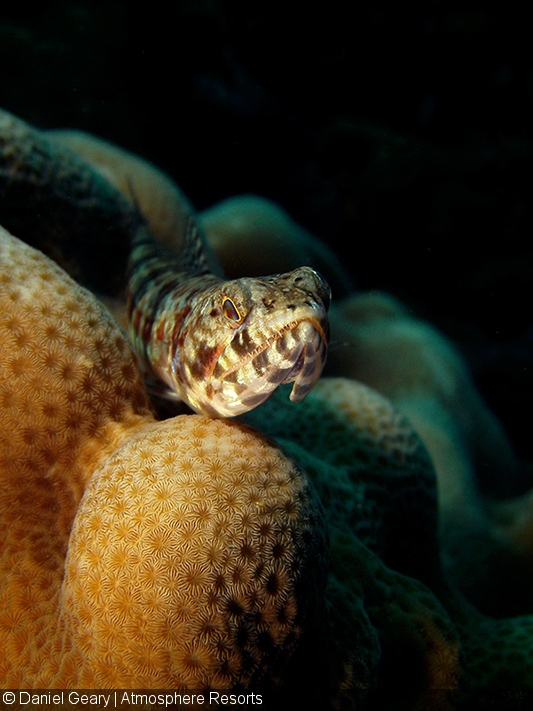 Some of the most desirable critters are found in undesirable places, especially harlequin shrimp and tiger shrimp, two species that seem to end up on brightly colored objects. An easy fix is to move the animal, but instead of manipulation, it is always possible to remove the background. By zooming in on the animal, the focus of the photograph ends up being a specific body part such as the eye or the face. A picture of an eye is always a winner, regardless of the size of an animal. Even something as simple as a frogfish lure or the spines of a sea urchin can result in a great photo. 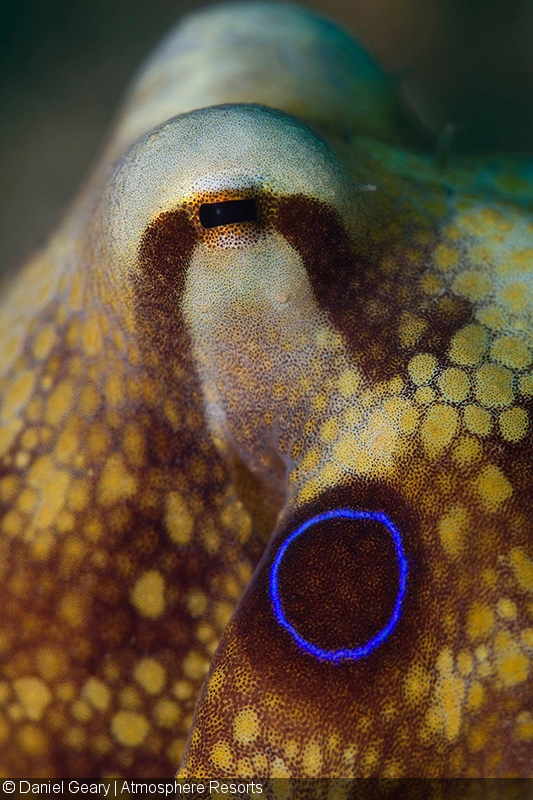 There are plenty of options when it comes to magnification, so take a good look at your subject before photographing and find part of the animal that stands out. If you have a simple compact you can zoom in on the subject, but if you have a more advanced setup or a compatible compact, try using a diopter to get a really cool magnified shot. 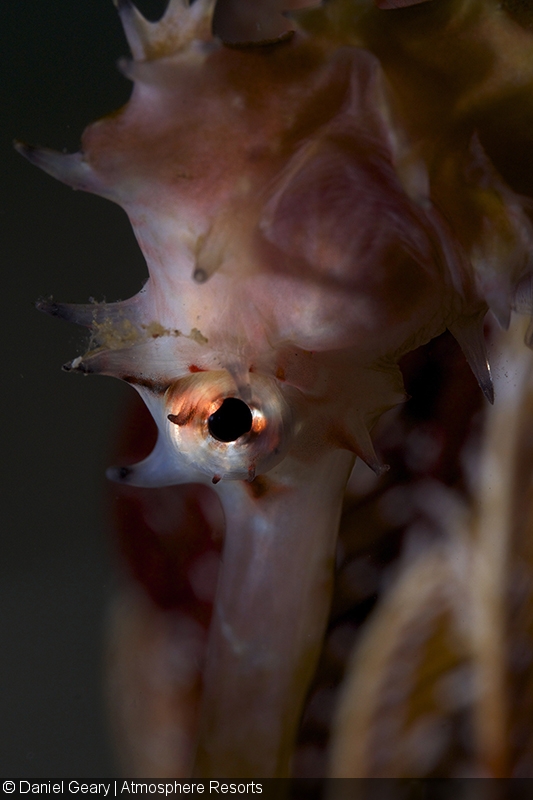 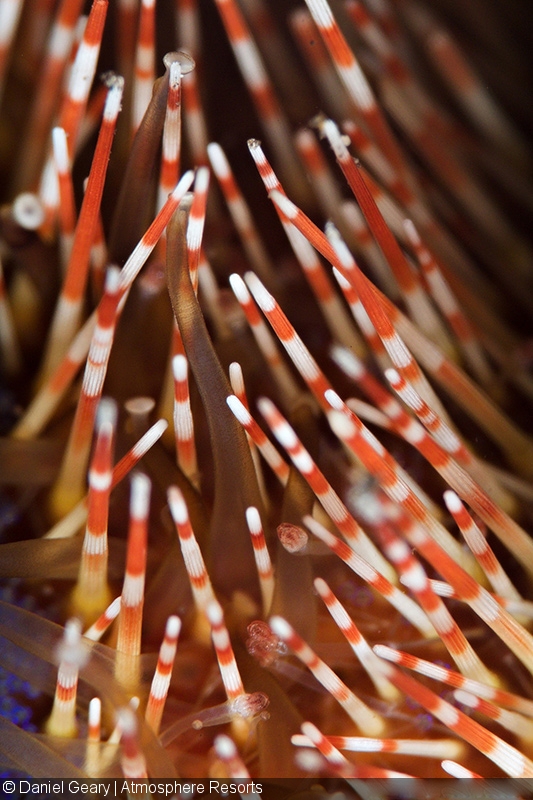 This sea urchin as a whole was not interesting, but the different body parts make for great composition 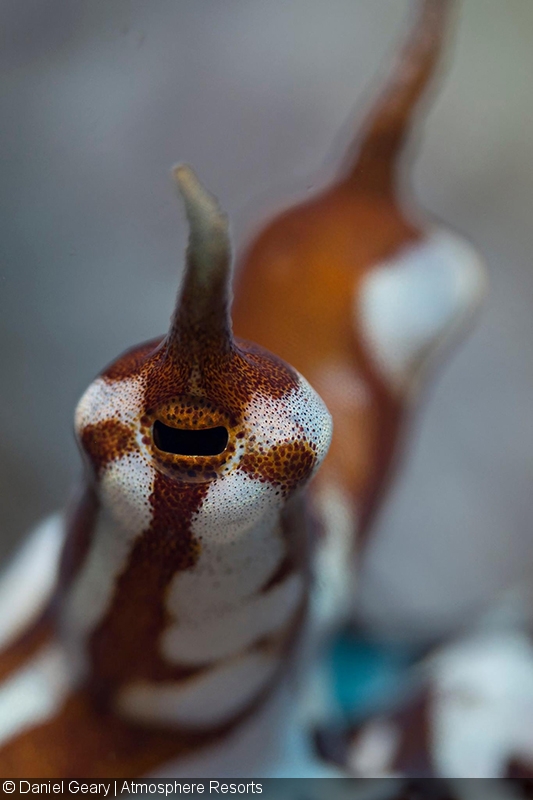 Wonderpus are very shy and sometimes camouflaged in rubble, a distracting background, so decreasing the depth of field (and using magnification) can result in a very creative shot

Decreasing the depth of field can have the same effect as magnification, and they sometimes go hand in hand due to the fact that they both take the focus off of the background—one method removes it; the other blurs it into obscurity. Both are great alternatives to manipulation and can be used in tandem. If shooting with a shallow depth of field, make sure you have good buoyancy control—otherwise it will be very frustrating. 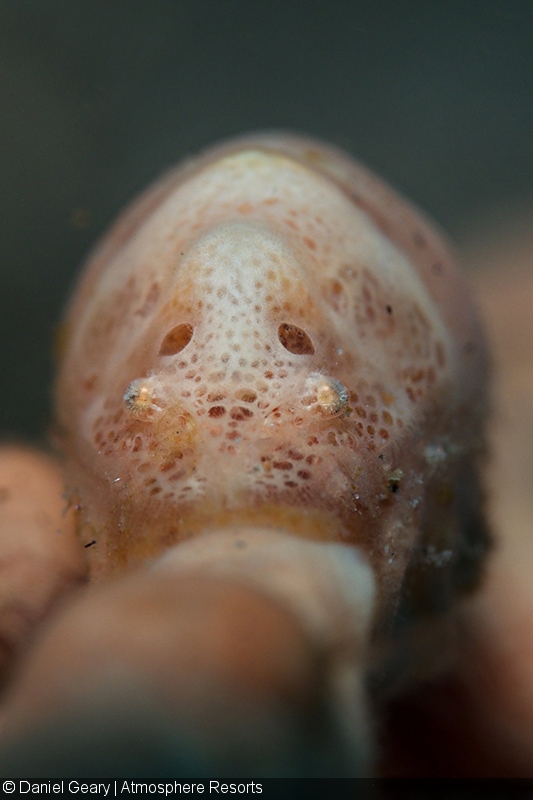 If a subject is exactly the same color as its host, like this cryptic shrimp, using a shallow depth of field increases the subject’s visibility

If behavior involves action and movement—not simply a symbiotic relationship between two animals, such as a crustacean and a host—we call this active behavior. This type of behavior tells a story and will normally result in a photograph that catches the eye. If a unique or photogenic behavior can be captured, the background (or lack thereof) doesn’t matter as much and your eye won’t be focused there anyway—it will be centered on the action in the shot. 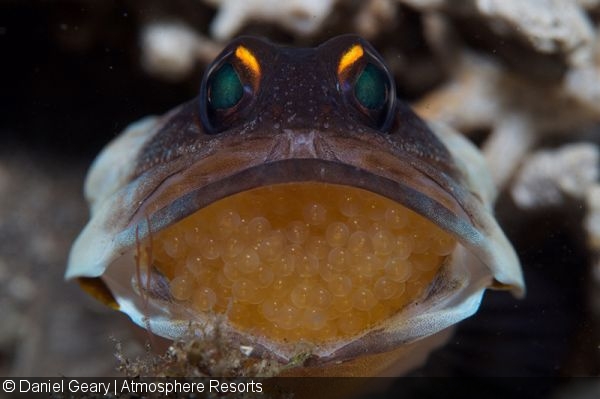 Jawfish are shy animals, but sometimes their mouths are so full of eggs that they cannot fit in their holes, allowing for a great behavior shot

Many animals brood their own eggs, such as cardinalfish. If you see a school of cardinalfish, find one with a pouch-shaped lower jaw, as this will be the male with eggs. Approach them slowly, see how they are behaving, and try to get a shot face on. Many shrimps and crabs have eggs on their abdomen and these shots, regardless of the background, are very appealing. Another great behavior to photograph is an animal being cleaned, either by shrimp or fish. As long as you are patient and watch their behavior, you should be able to get the money shot.

There are many other behaviors that happen naturally, such as nudibranchs laying eggs, frogfish luring prey, and dragonets or scorpionfish fighting. The key to capturing natural behavior is to watch and learn. Study up on animal behavior online or from local dive guides to understand the signs and signals that may precede a desired behavior. 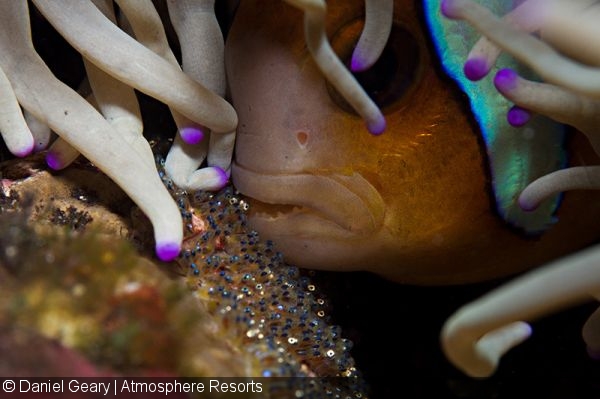 Clownfish are all over the Indo-Pacific and are common subjects, but look closely to see if they have eggs for a unique behavior shot 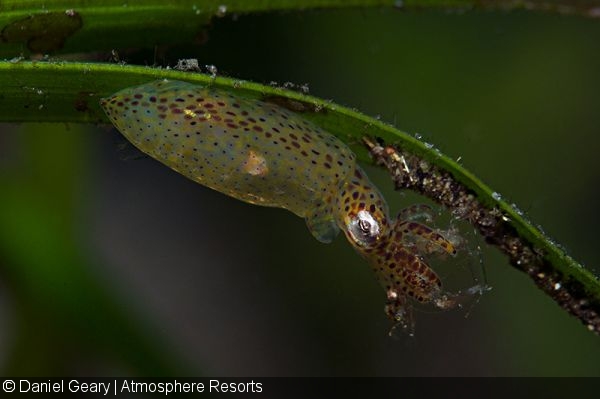 These incredibly small pygmy squid are always hungry, so if your eyesight is good enough, look to see if they have a small shrimp in their tentacles

Combining multiple techniques may result in a truly eye-catching photo, such as using depth of field or magnification in tandem with behavior, and if you’re really lucky, a solid background as well. Take your time and have a good look at your subject. Always pay attention to what your subject is doing and where it is located. 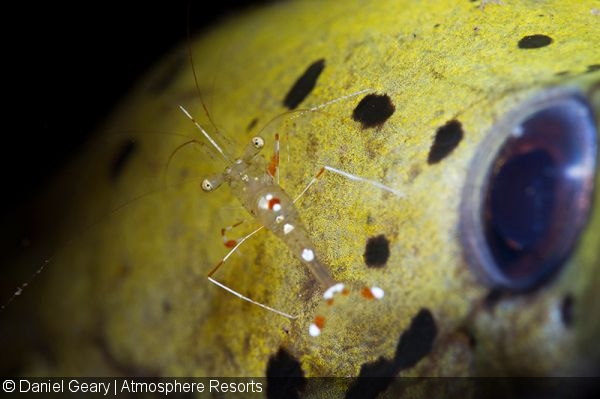 Using magnification, shallow depth of field, and capturing active behavior, I was able to snap this great photo using three techniques at once 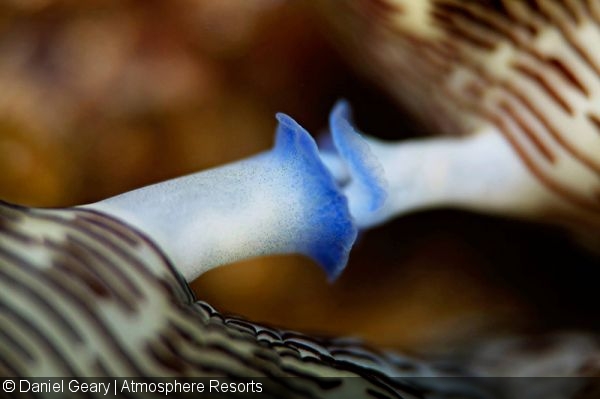 When I found a pair of nudibranches on top of a rock, I decided to use my diopter for a magnified shot, changed my settings to a shallow depth of field, and focused on the mating organs for a unique behavior shot 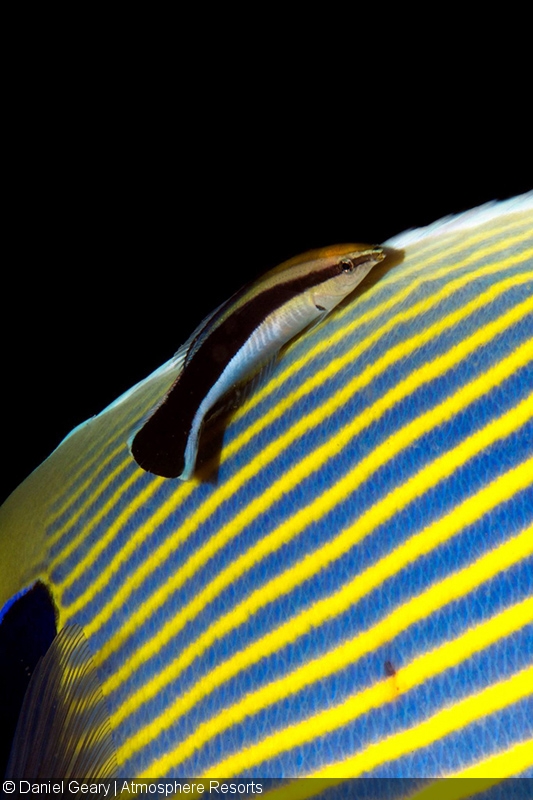 When I noticed this emperor angelfish being cleaned, I used magnification to focus on the wrasse, captured an active behavior, and utilized the angelfish pattern to create a stunning background

There are other alternatives to manipulation involving lighting techniques, such as changing your strobe positioning, using a snoot, or trying reverse ring macro, but those are more advanced techniques. Pay attention to the patterns in the environment and you will begin to see animals in a different light. Boring animals may become prime subjects for a photograph due to their background or coloration. Maybe a boring animal you see every dive actually has a really cool eye or face and you have never looked close enough to want to photograph it.

Practice your manual settings if possible for shallow depth of field, but if you have a compact that does not allow for shooting manually, macro and super-macro mode will decrease your depth of field automatically. Keep an eye out for active behavior. You never know when two fish in front of you might begin fighting or if that animal the dive guide has pointed out may suddenly be hungry for some breakfast.

About the Author: Daniel Geary grew up in Florida and has fostered a love of the ocean ever since he was a few years old. He has been diving for nine years and photographing for the last four years. He currently lives in Dauin, Philippines and works at Atmosphere Resorts and Spa as their in-house marine biologist, underwater photographer, and PADI dive instructor. He is a frogfish expert who teaches an exclusive PADI Frogfish Specialist course and continually promotes environmentally-friendly dive and photography practices.