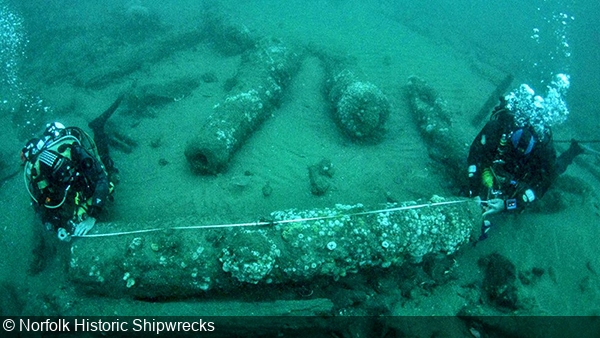 Julian and Lincoln Barnwell measure one of the Gloucester’s cannons

The wreckage of H.M.S. Gloucester, one of the most famous ships of the 17th century, has been discovered off the coast of Norfolk in England. The vessel, which sank 340 years ago while carrying the future King of England, was actually found in 2007 but has remained a closely kept secret—until now. The Gloucester ran aground on a sandbank in 1682, and remained half-buried on the seabed until it was discovered by brothers Julian and Lincoln Barnwell, with the help of their friend James Little, after a search lasting some four years.

“It was our fourth dive season looking for Gloucester,” said Lincoln, who was partly inspired to search for the wreck after watching the lifting of the Mary Rose on TV as a child. “We were starting to believe that we were not going to find her, we’d dived so much and just found sand. On my descent to the seabed, the first thing I spotted were large cannon[s] laying on white sand. It was awe-inspiring and really beautiful. It instantly felt like a privilege to be there, it was so exciting. We were the only people in the world at that moment in time who knew where the wreck lay. That was special and I’ll never forget it.” 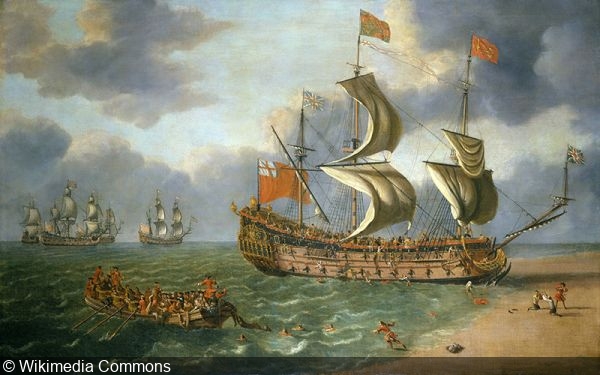 The wreck of the Gloucester off Yarmouth, May 6th, 1682, by Johan Danckerts

The Gloucester was selected to carry James Stuart, Duke of York, to Edinburgh to collect his heavily pregnant wife and their households and bring them home to London. The ship set sail from Portsmouth with the Duke and his entourage joining it off Margate, and in the early hours of May 6th, ran aground nearly 30 miles off Great Yarmouth after a dispute about how to navigate Norfolk’s treacherous sandbanks. It only took an hour for the vessel to sink, and while the Duke survived, hundreds of passengers and crew lost their lives.

The Barnwell brothers have partnered with Norfolk Museums Service and the University of East Anglia to create a major exhibition, planned for spring 2023, that will display finds from the wreck, including the bell (which allowed the ship’s identity to be verified), wine bottles (some with the original contents inside), navigational instruments, clothes, and even spectacles in a decorative case.

Find out more about the stories behind “Norfolk's Mary Rose” on the University of East Anglia website.