As most of our readers know, our European representative, Gyula "Jules" Somogyi is the man behind Heliox Film. He has released on DVD the multiple award short film Ships of Darkness this October. In the spirit of the holidays - we're going to give some away! The first 5 readers who can name at least one of the wrecks in the video will win a complimentary copy of the DVD. To participate, just add a comment at the end of this page, and we'll contact the first five who get it right so we can send you your DVDs! 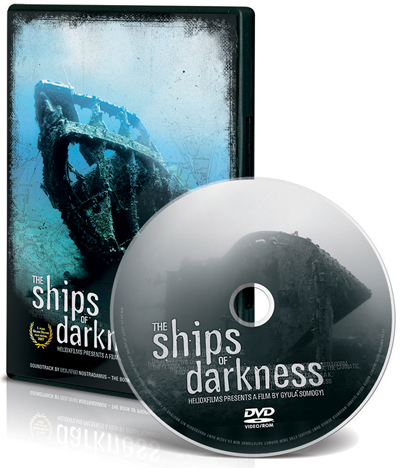 About Ships of Darkness

Two underwater short films – award-winning artistic “The ships of darkness” and recently published documentary-style “One of us” take the audience for mysterious voyages in history, descending from the light into darkness in order to visit the twilight zone, where the remains of wood, steel and flesh serve as a basis for the lively creatures of the underwater world. Flooded chambers, broken masts, exploded walls and windows hardened into stones make up the surroundings of a wreck-dive. (Filmed at the Red Sea.)

An additional unique feature will enable the viewers to look behind the scenes: a task-based After Dive Tutorial® explains the post-production techniques used in these films and will escort users to re-create them in their projects. The 57 minutes tutorial teaches how to use Apple Final Cut Pro® 6, Apple Motion® 3 and Apple Shake® for specific tasks, such as secondary color corrections, image stabilization, optical flow retiming, nested sequences and retouching the moving picture.

The DVD is also equipped with a 16 pages color booklet about the shipwrecks. It contains factual information regarding the wrecks’ GPS position, basic data, and a short history so it can be used for dive-trip planning.

Visit theshipsofdarkness.com to watch the trailer, and the intro of the After Dive Tutorial. (Hint, the wrecks are named here).


View the "After Dive Tutorial", which explians a bit about the technologies used in the post production of the film.

Remember, the first 5 comments at the bottom of this page who can name a wreck in the film, will receive free DVD's. Good luck!