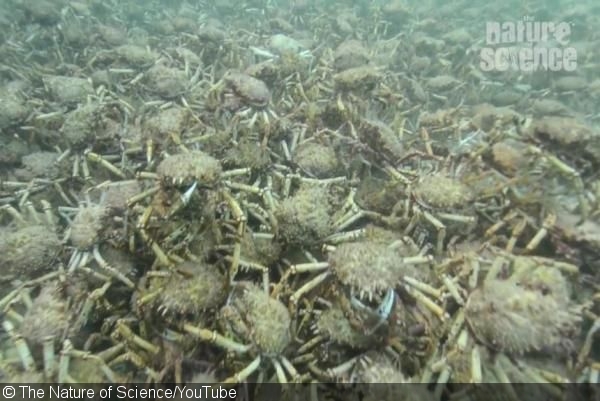 Anyone with a severe case of kabourophobia, do not read any further—and under no circumstances even think about checking out the cool video below of hundreds of thousands of giant spider crabs amassing off the coast of Melbourne, Australia. The mind-boggling footage, shot by Aussie aquatic scientist Sheree Marris, captures the annual migration of these enormous crabs as they make their way to the sandy shallows of Port Phillip Bay, south of the city, between May and July.

For some people, these creepy creatures will be the stuff of nightmares—with their 30-inch legs attached to a six-inch-wide body—but these crabs don’t mean anyone any harm. Quite the contrary: While the precise reason for the massive get-together isn’t known, it is thought that it has to do with safety in numbers as the crabs molt, since shedding their outer shells leaves the animals vulnerable to predators like stingrays and cormorants.

The Economist has been crowning Melbourne the world’s “most liveable” city for five straight years. It seems you won’t get any arguments from their local crustaceans.