When divers think about diving they seldom ponder what they will see in terms of seaweed or alga.  In fact what most think is “Sushi”… 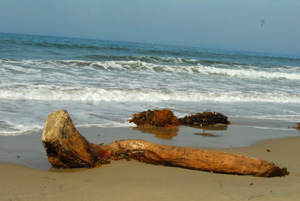 The Natural Geography In Shore Areas (NaGISA) is a collaborative effort aimed at inventorying and monitoring habitat specific biodiversity in the global near shore. The international character of the project and its target zone are reflected in the word, NaGISA, which is Japanese for the narrow coastal zone where the land meets the sea. NaGISA holds a unique position in the Census of Marine Life as an ambassador project, linking CoML to local interests around the world. NaGISA's first aim is to draw up a global baseline of biodiversity and then to use the network organized in that effort to continue monitoring those same shores for the next 50 years.

Its not glamorous science but it is, perhaps, some of the most significant being conducted since near shore, and that includes estuaries, is where most of the creatures we love to see start their lives.  The protocols are designed to monitor the shore to a depth of 10 meters and for divers that is where it really gets interesting.  Make no mistake, however, its all science and the findings are nothing short of amazing.

In this short 2 part film I call “Slime”  (videos below) you will get to see just what the scientists have to overcome to complete their work.  In most cases its gooey and smelly and there’s next to no vis.  On one of my adventures, to Cobscook Bay in Maine, we spent our days in the Bay of Fundi with really cold temps and tons of current; the tide can run as high as 26 feet in less than 6 hours.  When something bumped into you there was no telling what it might be, and that was on a good day.  What I do know is that it was also some of the most rewarding diving I have done in a long time and my respect for the researchers was fully reinforced by their determination and perseverance in finding answers to a whole range of questions…   RM
"Slime - Part 1"
"Slime - Part 2"